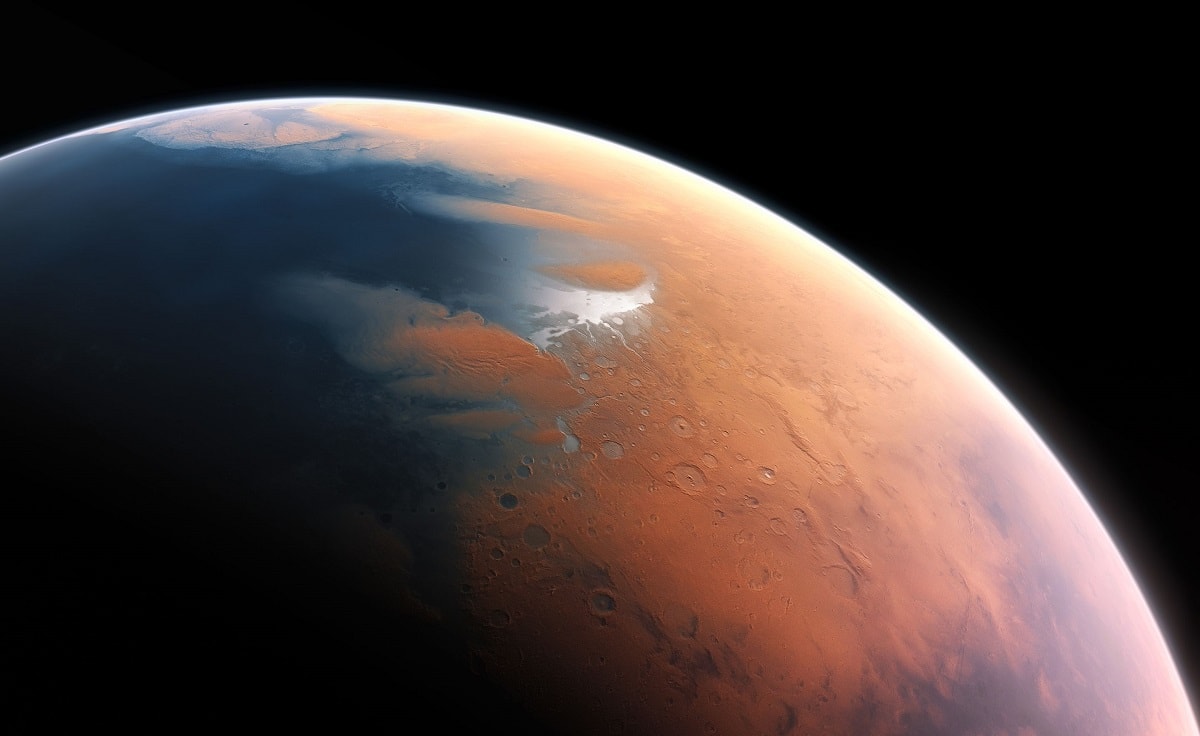 This artist’s impression shows how Mars may have looked about four billion years ago. The young planet Mars would have had enough water to cover its entire surface in a liquid layer about 140 metres deep, but it is more likely that the liquid would have pooled to form an ocean occupying almost half of Mars’s northern hemisphere, and in some regions reaching depths greater than 1.6 kilometres.

A new paper is suggesting that much more liquid water and potential subsurface lakes may lie beneath the south pole of Mars than researchers had previously believed.

The route to this finding began in 2018 when scientists working with data from the European Space Agency’s Mars Express orbiter announced that they discovered signals from a radar instrument reflected off Mars’ south pole appeared to show a subsurface lake.

According to the paper published in the journal Geophysical Research Letters, two scientists at NASA’s Jet Propulsion Laboratory (JPL) noted that they had discovered dozens of similar radar reflections around the south pole region. The data were surprising because some were in areas that were likely too cold for water to remain liquid.

“We’re not certain whether these signals are liquid water or not, but they appear to be much more widespread than what the original paper found,” Jeffrey Plaut, of JPL and co-principal investigator of the orbiter’s Mars Advanced Radar for Subsurface and Ionospheric Sounding instrument, said in a statement.

“Either liquid water is common beneath Mars’ south pole or these signals are indicative of something else,” he added.

According to Plaut and Aditya Khuller, a doctoral student at Arizona State University who worked on the paper while interning at JPL, the analysis showed many additional bright radar reflections over a far greater range of area and depth than ever before. In some places, they were located less than a mile from the surface, where temperatures have been estimated to be minus 81 degrees Fahrenheit.

Khuller cited a paper from 2019 paper in which researchers calculated the amount of heat needed to melt subsurface ice in this particular region. The authors settled on the conclusion that only recent volcanism under the surface could explain the potential presence of liquid water.

“They found that it would take double the estimated Martian geothermal heat flow to keep this water liquid,” Khuller said in a statement.

“One possible way to get this amount of heat is through volcanism. However, we haven’t really seen any strong evidence for recent volcanism at the south pole, so it seems unlikely that volcanic activity would allow subsurface liquid water to be present throughout this region,” he added.

If it is not liquid water, what could explain the bright reflections that were captured by scientists? The paper’s authors aren’t one-hundred percent sure, but their findings do offer a detailed map of the region that contains clues to the Red Planet’s climate history and the role of water.

“Our mapping gets us a few steps closer to understanding both the extent and the cause of these puzzling radar reflections,” Plaut said.