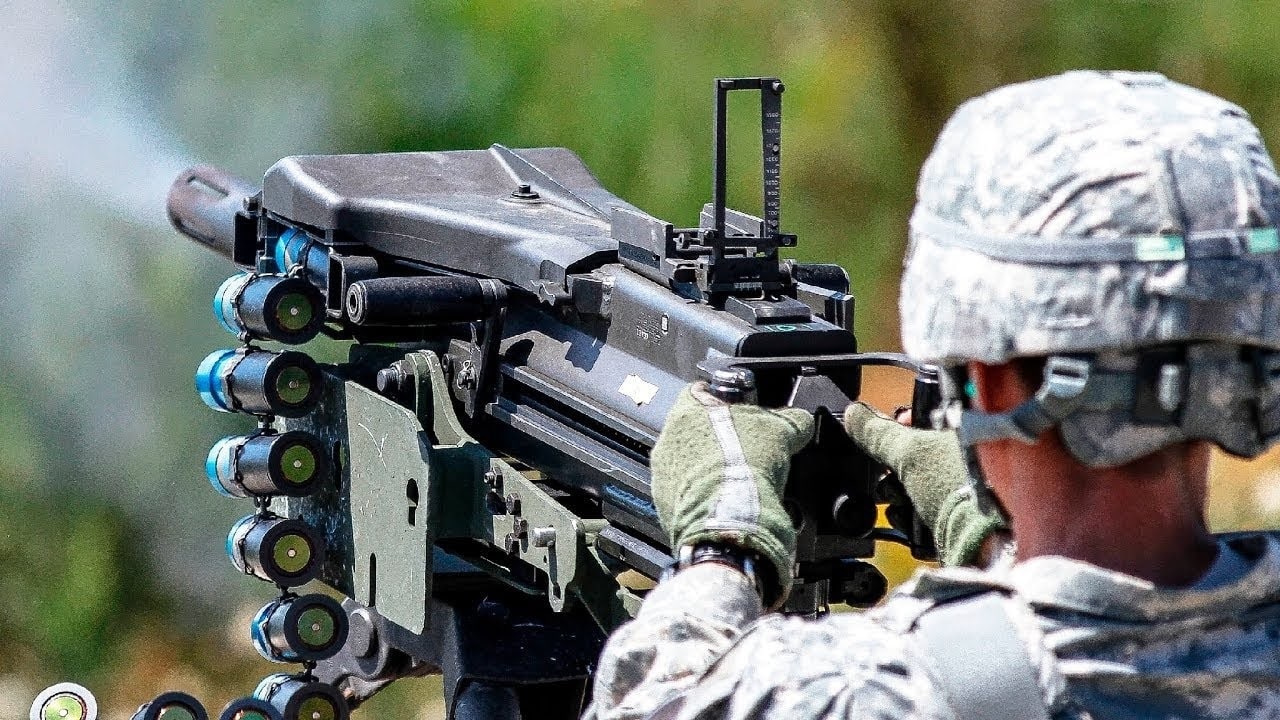 The Mk 19 grenade launcher has been a mainstay of American operations since its introduction in the late 1960s during the Vietnam War. The weapon is still prized for its ability to fire high numbers of 40-millimeter grenades accurately out to a distance of 1,500 meters, or nearly 5,000 feet.

The 40mm round packs quite a punch, too. According to the U.S. Army, the 40mm grenade used with the Mk 19 grenade launcher system can punch through three inches of steel and is best used against dismounted infantry and lightly armored vehicles, though the weapon could also, in theory, be used against some armored personnel carriers.

While the Mk 19 has low recoil, one of its shortcomings is weight. Without ammunition or any accessories, the Mk19 weighs over seventy-seven pounds or about thirty-five kilograms. Ammunition canisters are likewise quite heavy. Altogether, the Mk19’s weight is nearly prohibitively heavy for use by dismounted infantry, leaving the Mk19 most commonly used on vehicle mounts.

Though still in widespread use today among the United States military as well as a number of North Atlantic Treaty Organization (NATO) member countries, it wasn’t the first grenade launcher used in service with the United States.

The earlier Mk 18 used the same 40mm grenade as the Mk 19, though the design was hand-cranked, somewhat like the much earlier multi-barreled Gatling gun design.

The design was relatively light-weight, though firing with a hand-powered crank rather than a butterfly-style trigger reduced the weapon’s accuracy. The Mk 18 was often used in fixed positions during Vietnam, like bases, or on vehicle mounts.

Along with the Mk 18, an odd hybrid machine gun grenade launcher was built and experimented with, the XM174. This odd-looking launcher used a twelve-round canister, and appeared to use parts of the single-shot M79 grenade launcher as well as the M1919 machine-gun.

All platforms aside, there is now something better that you may have never heard of: the Mk 47.

In order to remedy the Mk 19’s high weight, General Dynamics developed the Mk 47. The grenade launcher is chambered in the same 40mm grenade ammunition as the previous Mk 19, though it can also fire airburst ammunition, useful against entrenched positions, or targets behind walls.

By far the biggest benefit the Mk 47 offers over the Mk 19 is its significantly lower weight. Incredibly, the large grenade launcher weighs just under forty pounds, or about eighteen kilos, making the weapon system much easier for grunts to hump around.

General Dynamics’ Mk 47 uses a Lightweight Video Sight that allows operators to engage targets during the day, and at night when used in tandem with a thermal imaging sight.

Though used primarily by the United States military, the Mk 47 has not seen widespread use and is in service mostly with United States Special Operations Command Units.