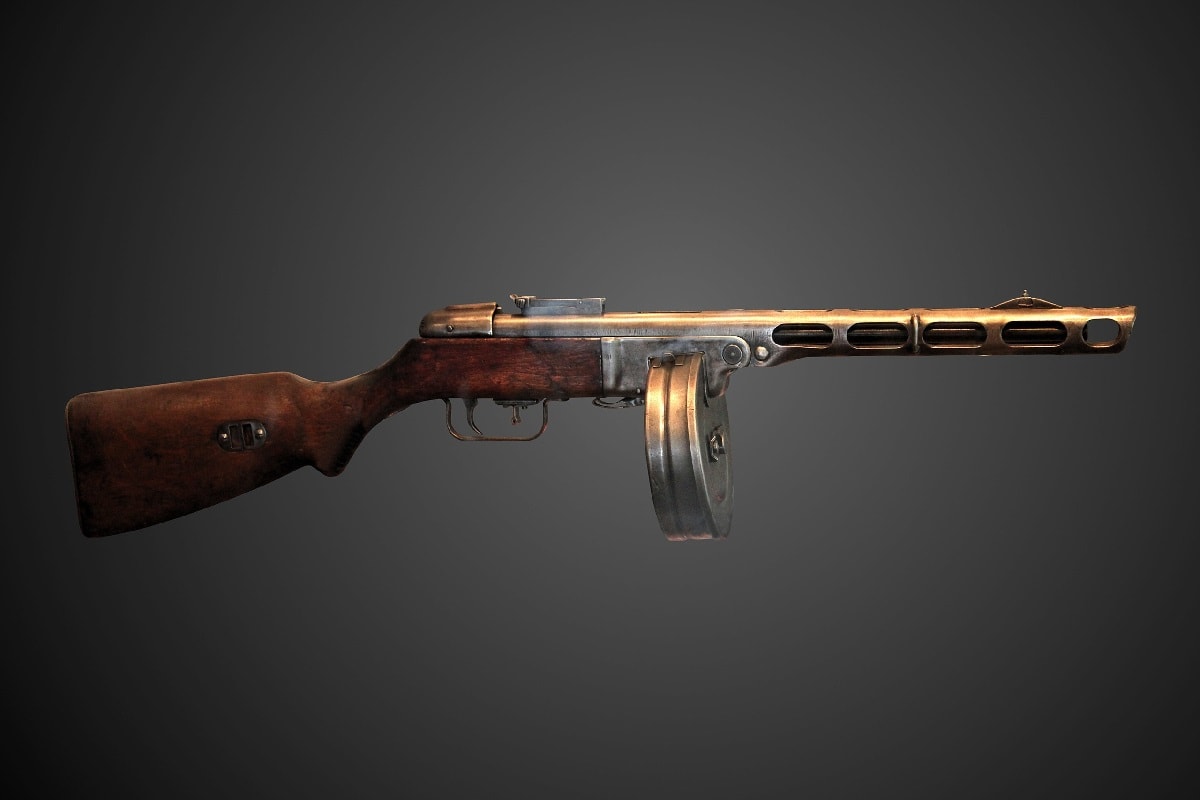 The PPsH-41 submachinegun undoubtedly reigns as an icon of the Soviet war machine in World War II, immortalized in combat photographs and in films such as Cross of Iron and The Tin Drum. Like the T-34 tank and the Il-2 Shturmovik attack plane, the “Pepsha” or “Papasha” (“Daddy”) was not only a rugged marvel of mass production, but performed well compared to more expensive contemporaries. Both the Red Army and later the Chinese and North Korean armies would employ the “burp gun” on an unprecedent scale.

Submachineguns began to appear near the end of World War I to help soldiers clear out trenches in brutal short-range assaults. These short barreled, highly portable automatic weapons usually employed the simple blowback principle in which the gasses expelled by a low-powered pistol cartridge both propelled the round out of the barrel and pushed back the weapon’s bolt, allowing a new round to pop up into the chamber to be fired once the bolt sprang back into place.

Despite the fame of weapons like the Tommy gun in interwar years, submachineguns were relatively expensive and only effective at short combat ranges below 150 meters, so armies adopted them only in modest numbers to supplement slow-firing but more accurate bolt-action rifles in general use. Typically, a single submachinegun might be assigned to a squad leader, though certain elite special operations units employed them in larger numbers.

The Red Army’s first submachinegun, the PPD designed by Vasily Degtyaryov, was inspired by the German MP18 and employed 7.62×25 millimeter Tokarev pistol cartridges. However, the PPD was labor-intensive to produce due to its milled-steel parts and only ninety thousand were issued by the time production ended in 1942, with most factories having been overrun by the invading Nazis.

Prior to that, the Soviets fought the bruising Winter War of 1939–1940, in which well camouflaged Finnish ski infantry equipped with excellent Suomi submachineguns decimated Soviet units in ambushes. Afterwards, the Red Army prioritized developing an effective submachinegun that could be cheaply mass produced.

Designer Georgy Shpagin took the PPD design to the chopping block, trimming away several components and innovating through the use of a stamped-metal body and perforated barrel jacket to speed production. If necessary, the weapon’s barrel could even be fashioned by simply chopping the barrel of a standard Soviet Mosin-Nagant service rifle in two. The resulting design was ideal for rapid fabrication by unskilled factory workers in just five to seven hours, half the time it took to produce a PPD. By the end of 1942, 1.5 million PPsHs had been produced.

The metal parts were lined with chrome for easier cleaning and reduced barrel wear, allowing the weapon to function with very little maintenance even under rough conditions. A simple lever also could switch the weapon to fire semi-automatically.

While other World War II powers also adopted crude mass-produced submachineguns like the British Sten, the German MP40 and American M3 Grease Gun, the twelve-pound PPsH was a sturdier beast than more expensive designs. While the German MP40 machine pistol had a cyclic fire rate of five hundred rounds per minute and used thirty-two-round magazines, the Papasha could cycle 900 rpm and employed a large seventy-one-round drum magazine. A heavy wooden stock and a leather breech buffer helped absorb the bolt’s heavy recoil; combined with a barrel compensator to reduce muzzle climb, the PPsH was more accurate than the PPD. You can see the weapon’s scary rate of fire in this video.

In fact, the PPsH hosed bullets so quickly it could be difficult to control. Nonetheless, captured PPsHs were popular with Germany infantry. The Wehrmacht liked the weapon so much it even re-chambered many PPsHs to accept 9-millimeter Parabellum rounds, designating them the MP41(r).

The Papasha began arriving in quantities to Soviet troops in 1942, in time to be employed effectively in brutal close-quarters street fighting in Stalingrad. Not only were most battles fought within the shorter effective range of submachinegun, but they were much handier when fighting inside buildings than long bolt-action rifles.

Beyond the cities, the Soviets employed human-wave tactics to overwhelm Axis defensive positions. Vast tides of Soviet conscripts would sweep out of the woods towards Axis positions bellowing Uraah! If enough survived the answering storm of machinegun and artillery fire to make it to Axis trenches, they would sweep away the defenders in storm of automatic fire.

PPsH were also smuggled and airdropped to hundreds of thousands of partisans fighting behind German lines who used them to ambush German convoys and garrison units. Partisan gunsmiths even home- manufactured artisanal Papasha using milled-steel! The PPsH was also employed by Soviet female and child soldiers.

In addition to the PPsHs individually doled out to rifle squads, each Soviet Infantry regiment and tank brigade was assigned an entire one-hundred-man company equipped only with submachineguns. These were joined in 1943 by five-hundred-man motorized submachine-gun battalions. Cossack cavalry units also made extensive use of the portable weapons as they accompanied tanks into battle and overran lightly-defend towns behind the frontlines. The Red Air Force even experimented with installing no less than eighty-eight PPsHs in the bomb bay of a prototype Tu-2sh bomber nicknamed the “Fire Hedgehog,” but the impractical concept was not used in combat.

As the Red Army counter attacked across huge swathes of territory, PPsH-equipped tankodesantniki—or ‘Tank Riders’—gave advancing Soviet armor desperately needed infantry support. Unlike the German or U.S. army, the Red Army lacked domestically-built armored personnel transports to accompany tank units penetrating behind enemy lines. While infantry riding atop tanks was common on an ad hoc basis in other armies, the Soviets organized tank rider companies and even installed handlebars on T-34s for them to cling to. While other tank riders typically dismounted upon contact with the enemy, the tankodesantniki often remained on their steel mounts as they rumbled towards enemy lines, only to spring off nearly on top of their terrified enemies and spray them with automatic fire.

Soviet tanks suffered heavy losses even in the closing stages of World War II, and those riding on top of them had even shorter life expectancies than the crew inside. Nonetheless, the tank riders played a vital role in clearing out Axis defensive lines and seeing off ambushing infantry, facilitating far-reaching Soviet offensives like Bagration that hastened the collapse of Nazi Germany.

The PPsH received only minor changes throughout World War II. Because the large drum magazine offered a clumsy grip, a thirty-five-round box magazine was later issued, followed by as a sturdier version of the drum magazine. In 1943, an even simpler PPS43 submachinegun entered production which had a lower rate of fire and required less than three hours to produce! However, the PPsH was by then being manufactured on such a large scale that the PPS never really replaced it. more than six million PPsHs were manufactured during World War II, compared to “only” two million PPS43s.

The Burp Guns of Korea

After World War II, the Soviet military soon adopted the SKS semi-automatic carbine and the legendary AK-47 assault rifle. However, many of the Papashas were passed on to Communist allies including China and North Korea.

The North Korean Type 49 became the first small arm to be locally mass produced by Pyongyang, retaining the seventy-one-round drum magazine. China shortly after began producing the box magazine using Type 50. Both were widely employed in the Korean War when North Korea first invaded South Korea, and then China intervened to prevent North Korea from being overrun by a U.S.-led United Nations coalition.

The distinctive sound produced by the Type 49’s high rate of fire led UN forces to dub it “the burp gun.” The Chinese knew their Western adversaries had superior long-range firepower, both in terms of heavy weapons as well as more accurate small arms like the M1 Garand and M14. Therefore, Communist troops would infiltrate close to UN positions under the cover of night—then surged forward in a human wave only visible at short range. While many attackers fell to defensive fire, once the shock troops flooded into the UN outposts, their burp guns hosed out greater volumes of firepower.

Though the Type 50 was not especially accurate, they were still dreaded by Western troops as their distinctive sound heralded an unforgiving battle with determined foes at close range. U.S. General Hal Moore recalled in the Coldest Winter by David Halberstram:

On full automatic it sprayed a lot of bullets and most of the killing in Korea was done at very close ranges and it was done quickly – a matter of who responded faster. In situations like that it outclassed and outgunned what we had. A close-in patrol fight was over very quickly and usually we lost because of it.

Twenty years after it entered production in Russia, North Vietnam began producing its own K-50M sub-machineguns. These were PPsHs with a shortened cooling jacket, a pistol grip, and a telescoping wire stock. These were used in the Vietnam War against South Vietnamese and American forces. In fact, the PPsH dispersed so widely across the globe that several were captured from insurgents by U.S. forces in Iraq in the twenty-first century.

While more flexible assault rifles have mostly superseded weapons like the PPsH on the frontline, the submachine gun remains a symbol of the Soviet struggle in World War II, a deadly tool that allowed Communist troops to overwhelm their enemies in close quarter combat.

Sébastien Roblin holds a master’s degree in conflict resolution from Georgetown University and served as a university instructor for the Peace Corps in China.