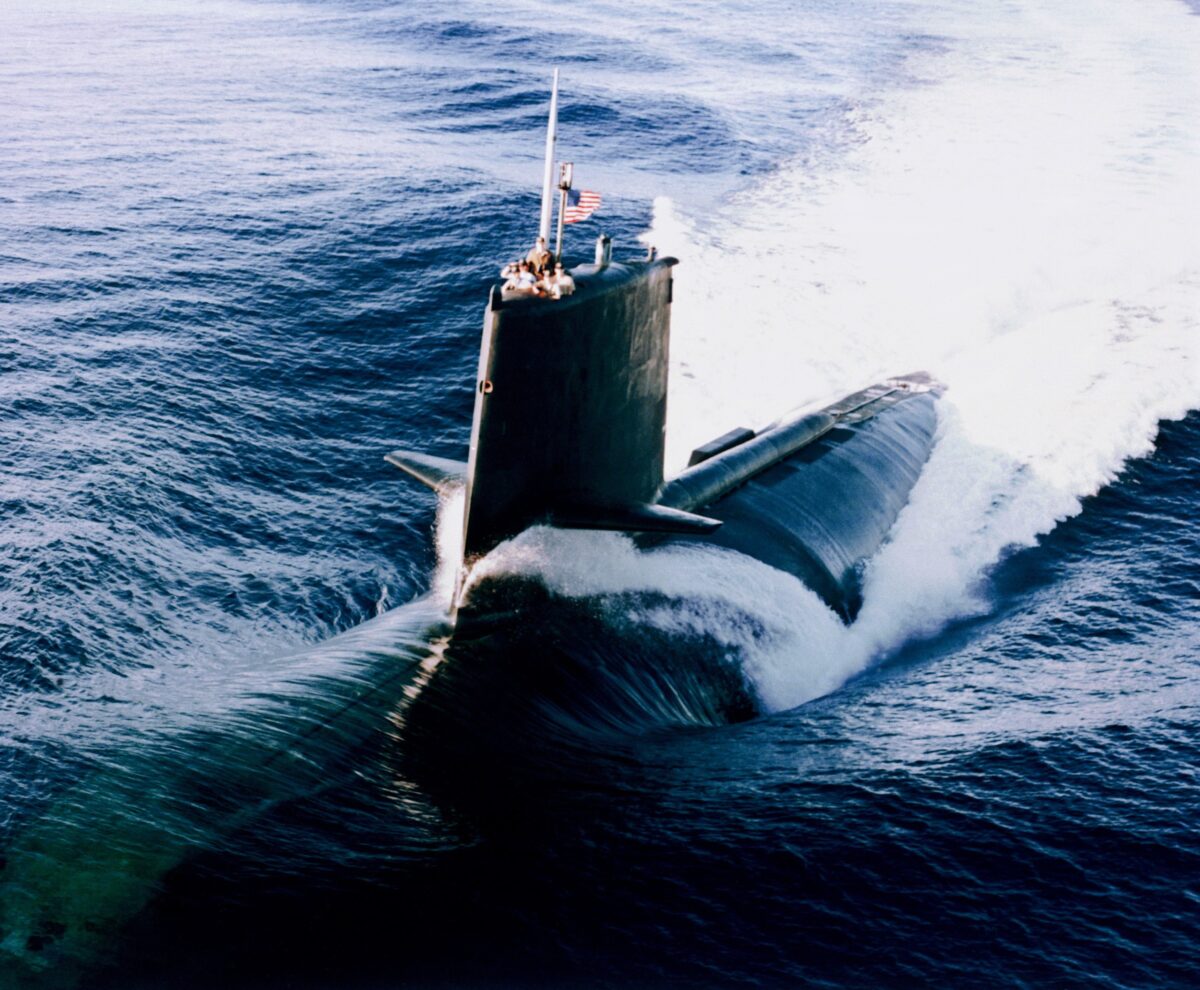 During the Cold War, the United States Navy developed what were arguably the first truly modern submarines with the Skipjack-class, which combined two new innovations – nuclear power and a “tear drop” hull design, which reduced underwater resistance and allowed greater submerged speed and maneuverability. Both technologies had already been used, as the USS Nautilus was the world’s first nuclear-powered submarine when it was launched in 1954, while the USS Albacore was the first to feature the “teardrop” hull when it entered service in 1958.

However, as a “top to bottom” new attack submarine design it used nuclear propulsion and featured the new hull design. In addition the USS Skipjack – the lead boat was named after the Skipjack tuna – was also the first nuclear submarine to utilize a single shaft, and the placement of the bow planes on the sail helped reduce the flow noise at the bow-mounted sonar. The fish-shaped subs, which were a departure from the “cigar-shaped” hulls, became the basis of all future American submarines.

Construction on the lead ship of her class was laid down in May 1956 by the Electric Boat Division of the General Dynamics Corporation, and USS Skipjack was launched on May 26, 1958. The boat was 252 feet in length, 31 feet at the beam. She was 3,070 tons surfaced and 3,513 tons submerged, and had a speed of 15 knots surfaced and 29 knots submerged. Unlike other submarines of the era, the S5W nuclear-powered reactor meant that the Skipjack­-class boats could remain submerged most of the time.

The boat featured six 21 (533mm) torpedo tubes at the bow, and was armed with 24 torpedoes, which included the Mark 37, Mark 14, Mark 45 ASTOR nuclear torpedoes and/or Mark 48 torpedoes.

A total of six Skipjacks were produced from 1956-1961 and the boats remained in commission from 1959 until 1990. While these boats were essentially rushed into service, it is a testament of the innovative features that the final one wasn’t retired until the end of the Cold War.

Sadly, the third ship in the class, USS Scorpion, was lost with all hands – 12 officers and 87 enlisted men – on May 22, 1968. She is one of two nuclear submarines, along with the USS Thresher, that has been lost by the United States Navy, and was one of four mysterious submarine disappearances in 1968 along with the Soviet K-129, the French Minerve and the Israeli INS Dakar. The U.S. Navy initially concluded that the most probable cause of the loss of the Scorpion was the launch of an inadvertently activated torpedo, which may have turned and struck the boat. After a six-month search, the wreck of the Scorpion was found 400 miles southwest of the Azores, but an investigation showed no evidence of torpedo damage. A later theory suggested that an irreparable leak may have flooded the submarine, which resulted in an internal explosion that caused it to sink.