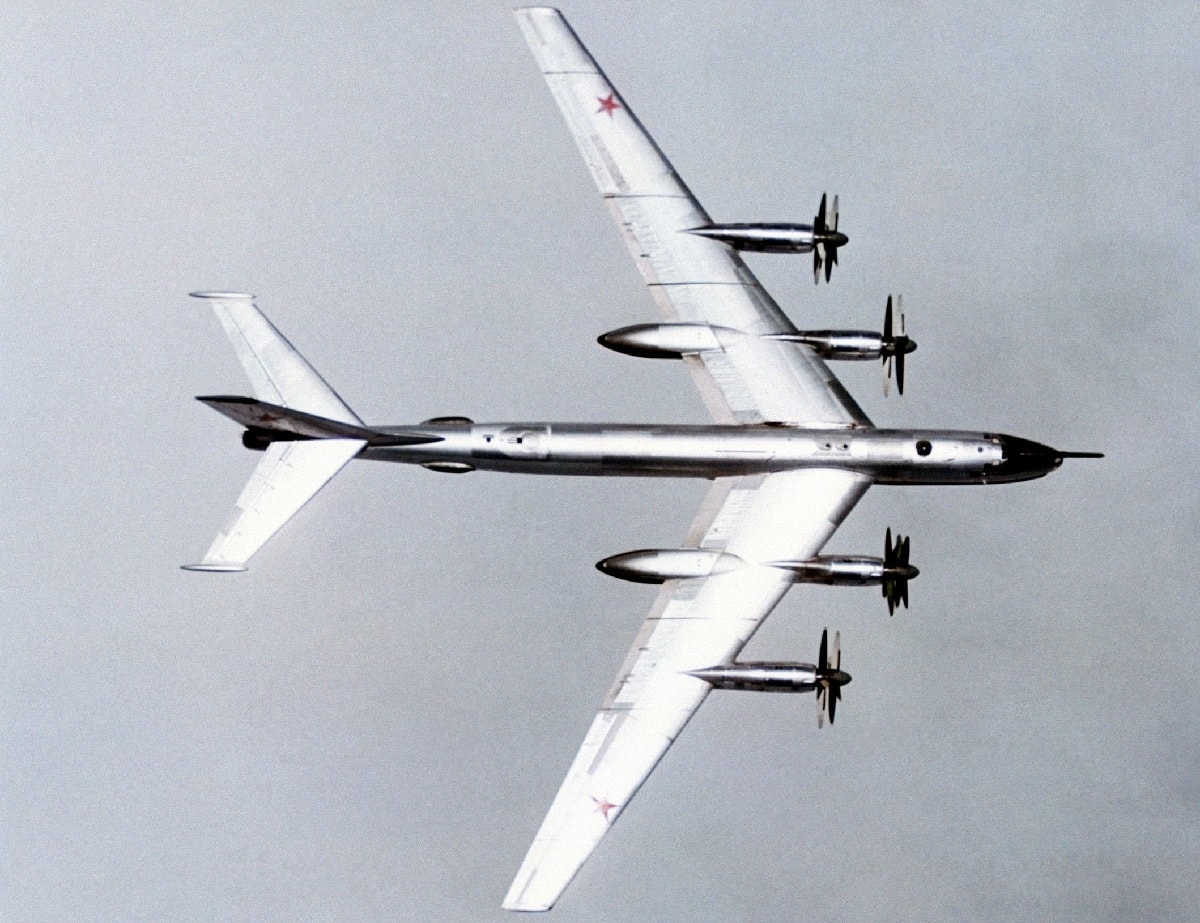 The vast majority of the Russian Federation’s military equipment is legacy or surplus from the Soviet Union days — be they small arms, tanks, jets, or armored personnel carriers. Bombers are no exception. However, one particular bomber, the Tupolev Tu-95 has remained relevant into the 21st century due to a combination of airframe refurbishment, electronics, and avionics upgrades, and most importantly, longs strides in weaponry, particularly standoff missiles.

Before the advent of intercontinental ballistic missiles, bombers were the primary means of delivering nuclear payload on target and were essentially like the F-35 programs of the 1940s and 1950s: large, in charge, and expensive.

Bombers had to have massively long endurance to make the journey from the eastern seaboard to Moscow and back — or if not back, have enough fuel to land elsewhere. In the case of the Soviet Union, a long-range bomber would have to have a range of 5,000 miles or so, in order to strike important targets in the United States.

Andrey Tupolev, the grandfather of Soviet bombers and himself a successful airplane designer came up with a design that is fast approaching years old.

Although the overwhelming majority of military aircraft in service today use some form of the jet engine, the Tupolev Tu-95 does not.

Consider the technology of the time: in the early 1950s, jet propulsion certainly existed — and was capable of better performance than traditional propeller-driven aircraft — but was energy-intensive. Put plainly, early jet engines were gas guzzlers that could not compete with propeller-driven designs.

Using captured German and Austrian engineers, Tupolev had them design a fascinating and unique propulsion system, the contra-rotating turboprop.

The KN-12 turboprop system is powerful and loud. But, as they say, if it ain’t broke, don’t fix it. The same contra-rotating system is still employed on the Tu-95 today.

Part of the lasting success of the Tu-95 is its flexibility and ability to adapt to a variety of mission profiles.

Although originally intended to drop free-falling bombs and nuclear warheads, the platform can be modified for many missions, including maritime- and border patrol. Now with the maturation of Russian missile development, such as the advent of air-launched cruise missiles, it is used as a standoff missile platform.

Although not at all stealthy, the Tu-95 platform has remained relevant in the 21st century, partly due to weapons modernization and in a particular standoff, air-launched weapons, used very prominently during the 2018 Vostock military exercises.

The Tu-95 platform has also enjoyed a great deal of success as both an experimental platform itself, as well as the carrier of a number of experimental weapons or devices.

Also of note was a Soviet experiment in which a nuclear reactor was used as the propulsion system for a prototype Tu-95, essentially strapped into the fuselage with some lead sheeting around the cockpit as a safety measure. Utterly ridiculous.

Shine On, You Crazy Bomber

Tupolev’s design has clearly stood the test of time and does not appear to ready to retire anytime soon, partly due to weapons modernization, partly due to a capable, flexible design that has managed to stay relevant into the 21st century.

Caleb Larson is a Defense Writer based in Europe. He holds a Master of Public Policy and covers US and Russian security, European defense issues, and German politics and culture.