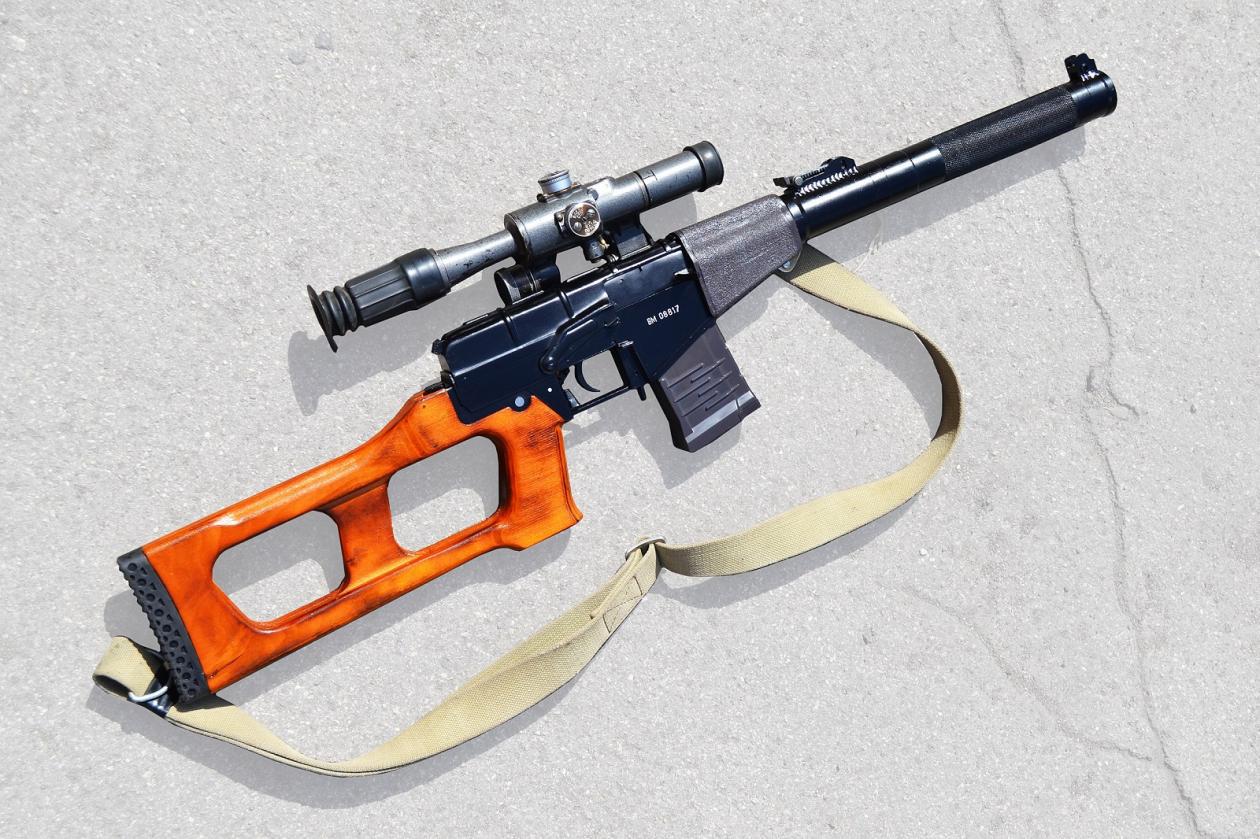 Cut back to the late 1980s. NATO troops are increasingly issued more and better body armor. Flack jackets and helmets are designed to defeat the AK-74’s standard-issue 5.45x39mm cartridge, giving NATO countries a distinct advantage on the battlefield. Soviet designers realize their ammunition needs to play catch-up. They hit the drawing board and improve the AK-74 round by adding a hardened steel core.

While this provided a quick solution for frontline troops, there was an acute need for a new weapons system for reconnaissance and special operators. The requirements were similar: penetrate NATO body armor, plus one crucial difference—it had to be suppressed.

What Soviet arms designers came up with are two strange-looking but deadly quiet rifles: the VSS Vintorez and AS Val.

This family of rifles is quite unique. Both have been issued to various Russian special forces, intelligence units, and some security services. The VSS Vintorez features a skeletonized wooden stock, somewhat similar to the SVD sniper rifle. The AS Val is much the same, but rather with a folding steel stock.

The charging handle and safety are similar to those from the AK family. Both rifles have an integrated suppressor sheath that fits over and encloses the entire length of the barrel. The barrels have small holes drilled into the rifling near the muzzle that direct hot gas from exploded propellent into and out of the suppressor.

Although the silencer is removable, it is not advisable to be operated without, as hot gas escaping from the barrel can harm the shooter. Also, the AK-style iron sights are fitted directly onto the silencer, so shooting without the silencer would be impractical.

An Old Round, Resurrected:

But what would these formidable rifles be chambered in? None of the Soviet Union’s existing ammunition inventory would meet the crucial requirement of an extremely quiet report. A new cartridge would need to be developed. The Tula Arms Plant— founded in 1712 by Peter the Great— was up to the task.

The design team at Tula carefully weighed tradeoffs between old ammunition designs and something totally new. They eventually decided upon a round that had been developed after the Second World War, but abandoned in favor of more powerful cartridges: the subsonic 9x39mm.

A better match couldn’t have been thought up. Because the 9x39mm is subsonic, it travels slower than the speed of sound— thus never breaking the sound barrier. Because the bullet does not create a sonic boom after it leaves the barrel, it is significantly quieter than most ammunition. Combined with enormous suppressors, both the Vintorez and Val shoot extremely quietly. If you’ve ever wondered what shooting sounds like without the “crack” of a gunshot, look no further.

As a subsonic round, it does not have a very flat trajectory, somewhat limiting its application outside of recon or special operations. Maximum effective range is just 400 meters with a scope— best suited for nighttime assassinations, or for recon teams moving quietly behind NATO lines.

It packs a punch though— nearly double the mass of the venerable 7.62x39mm round of Soviet AK-47 fame. Several variations of the round were designed, but the most deadly has steel core that can penetrate a maximum of 10mm of steel. Combined with an air pocket in the nose, which increases yaw after penetration, the 9x39mm is lethal.

Despite being designed and issued in the late 1980s, The VSS Vintorez and AS Val rifles filled an interesting niche in Soviet armories and remain in service with the Russian Federation today. Both rifles have seen action outside of Russia, notably in Georgia, Syria, Ukraine’s Donbass region, and Crimea.

The VSS Vintorez and AS Val rifles are excellent examples of two different operational requirements— armor-piercing capability and suppression— coming together under excellent Soviet gunsmithing. The fact that they are still issued today are a testament to their quality and indicate they will continue to be used by Russia for some time to come.

Caleb Larson holds a Master of Public Policy degree from the Willy Brandt School of Public Policy. He lives in Berlin and writes on US and Russian foreign and defense policy, German politics and culture.