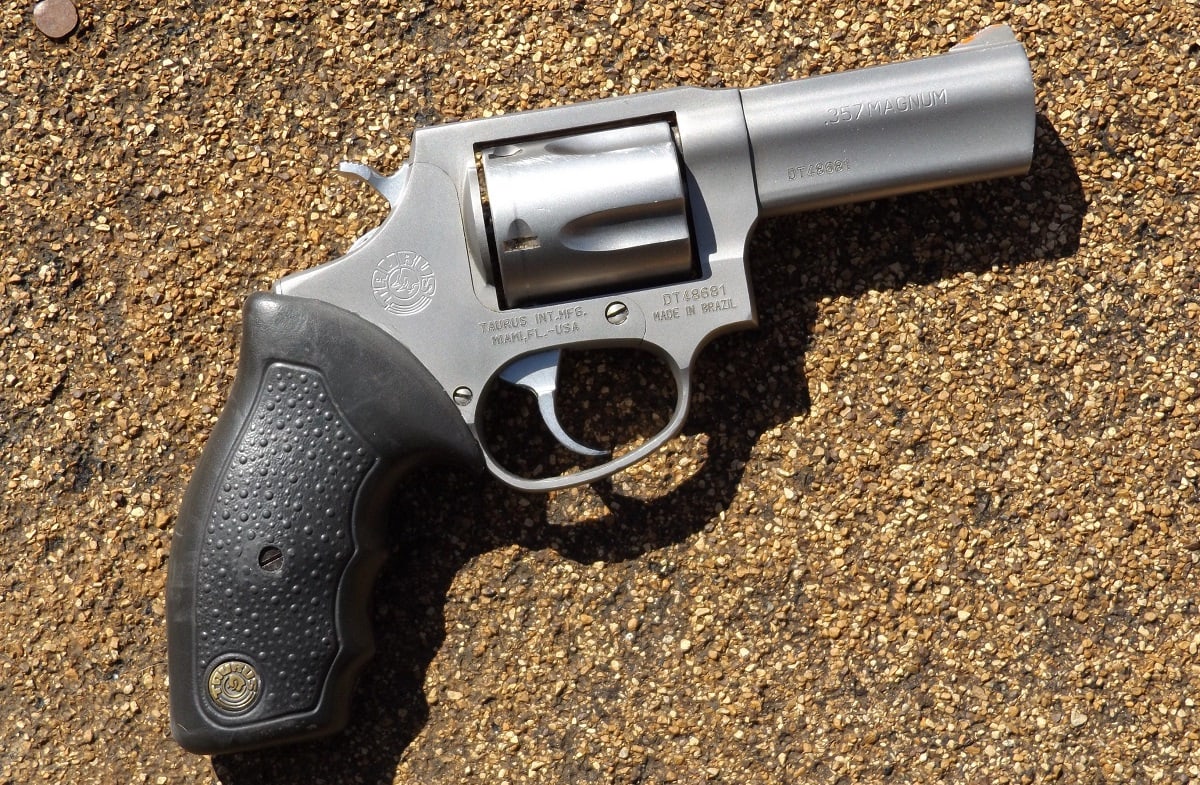 The Taurus 605 is a prime example of a high-quality “pocket gun.” It’s very small and easy to conceal, yet still packs quite a punch! With an overall length of just 6.5” (and a 2” barrel), it’s much smaller than most other revolvers and shoots with both accuracy and utmost reliability.

It features a stainless steel frame and small stainless steel sights, a fixed ramp in the front and a gutter in the rear. The front sight is serrated very nicely, and both sights are low profile for a cleaner pull. However, their stainless steel finish does make them harder to aim with. Some people may want to switch them out for something like a red dot with a reticle, but unfortunately, there’s not much of an aftermarket for these revolvers. Most people, myself included, opt to just paint them a brighter color for a quicker aim and more accurate shot!

It’s easy to get on target from twenty-five yards, but the heavier double-action trigger pull does impede your shot’s accuracy a bit. For a lighter, cleaner trigger pull, you can try manually cocking the spur hammer and shooting in single-action. Overall, however, the 605’s accuracy is pretty decent.

Since the 605 itself is pretty small, it doesn’t come as a surprise that the smaller grip might be too tiny for someone with larger hands. Personally, however, I find the two-finger, overmolded, rubber grip large enough to still feel secure. It even covers the backstrap to cushion some of the recoil!

As you’d probably expect from a small gun that shoots heavy loads, the recoil can be excessive. While the 605 does weigh 24 oz unloaded, which is relatively heavy for its size, trying to handle the muzzle flip that comes with .357 loads (the size it’s chambered for) can become painful after a while. For a lighter recoiling option, I’d recommend shooting the alternative .38 Special loads instead.

All in all, the Taurus 605 has proven itself to be a 100% reliable revolver. I’ve shot hundreds of rounds through mine and never encountered any failures of any kind! It shoots well, it’s easy to operate, and the lockup is extremely tight. Although some might think the five-shot capacity is too low, it’s meant primarily for self-defense, and you should have plenty of shots for those scenarios.

You can get a 605 for somewhere around $375, making it a very budget-friendly option. Plus, it comes with Taurus’ lifetime warranty, should you ever need a replacement! As mentioned, it’s a great concealed carry option, and while it’s not a great choice for hunting, it would also work well as a nightstand or car/truck gun! Just make sure you lock it up when it’s not in use.