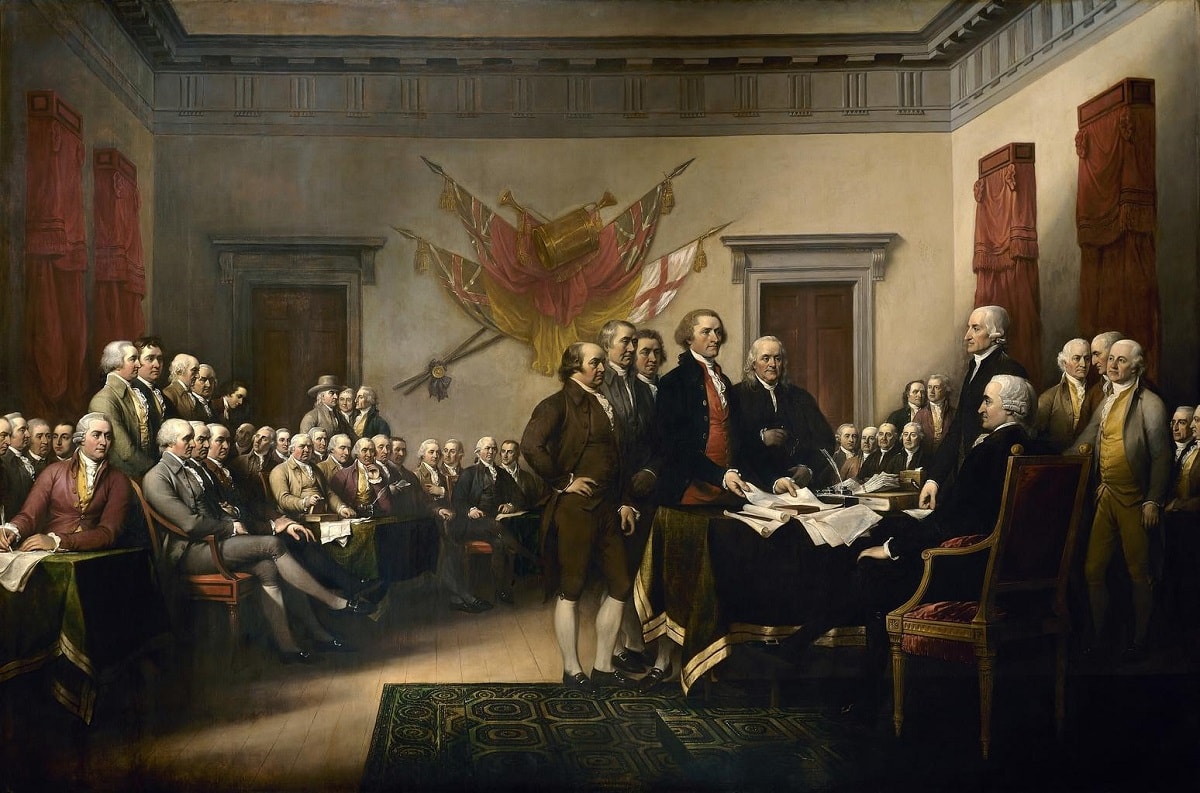 To be human is to experience limitations, and no limitation is as tangible as one’s finite ability to know.

To surmount these cognitive limitations, one makes assumptions based on what is already known, trusting that in the process of exploration one will learn whatever is needed to reach his or her ultimate goal. But behind and underlying these assumptions is a philosophy that constitutes the reason for acting in the first place. Assumptions have their place in foreign policy and strategy, but only if they are securely nested within a clear and cohesive philosophical framework.

For American foreign policy professionals, that framework is and ought to be the principles articulated in our Declaration of Independence.

In a whole-of-government approach, foreign policy professionals operate in a stratified view of reality in which disparate tactics and operations converge into a unified strategy. This strategy is often, and appropriately, full of assumptions to be confirmed or denied. These assumptions are necessary to start moving toward a desired end. Perhaps no one explains this dynamic better than Brigadier General (Retired) Huba Wass de Czege.

Wass de Czege, an innovative thinker and founder of the Army’s School of Advanced Military Studies, illustrates the role of assumptions in strategy through the metaphor of an early American explorer. The explorer sends out scouts for limited, concrete, and actionable purposes, but within a flexible strategic framework. As Wass de Czege explains, “Strategy is about choosing the ‘best’ way forward – one that usefully exploits the potential of what is known.”

The strategist, like the explorer, begins his journey with many unconfirmed assumptions that are necessary to begin movement but not sufficient to achieve his desired end state. He must hold these assumptions loosely and “constantly evolve his strategic rationale.” The strategist is in a perpetual state of learning, enabled by a healthy combination of confidence and intellectual humility. As he confirms and denies assumptions, he formulates new ones to take their place. He moves “from one promising position to another, occasionally retracing steps to find a way around obstacles, and following where learning takes it.”

Strategy in a vacuum, however, is insufficient. Defining strategic ends requires input from a source outside the strategy itself. Just as the explorer needs a reason to brave the unknown and a general idea of which direction to start in, the strategist finds his purpose in the presuppositions he brings to that strategy from elsewhere. Those presuppositions, or things “taken as being true or factual and used as a starting point for a course of action or reasoning,” are inevitably philosophical in nature.

Foreign policy professionals, uniformed servicemembers, and diplomats are no exception. They may strive to remain apolitical, or at least nonpartisan, but it is impossible to avoid espousing a particular philosophy. A whole-of-government strategic approach by definition cannot be divorced from politics, economics, etc. since it entails the cooperation and coordination of all those things. Therefore, strategic assumptions must be made according to a common national philosophy for a national foreign policy to be cohesive. This philosophy guides and propels international engagement and gives it purpose. Without a clear national philosophy there is no foreign policy per se.

The US National Security Strategy is itself a strategy and as such cannot be relied upon for philosophical guidance. Each iteration inevitably rests upon philosophical presuppositions, which are just as inevitably drawn from external sources. The challenge, then, is determining which philosophy delivers the noblest, most realistic, and most appropriate set of presuppositions by which to direct national strategies and foreign policy.

The first step in identifying a cohesive philosophy for international engagement is to understand the character of our own nation. Foreign policy expert Angelo Codevilla teaches that “the arts of diplomacy, economic suasion, influence, and war are means by which to move other countries. They are logically subordinate to decisions about the ends proper to one’s own country and prudent in its circumstances.” Lieutenant General (Retired) Charles T. Cleveland, former commanding general of US Army Special Operations Command, agrees that even the way we wage war should “reflect who we are as a people, our diversity, our moral code, and our undying belief in freedom and liberty.”

Fortunately for US foreign policy professionals, American national philosophy is woven into the very fabric of her institutions, making the proper philosophy readily accessible by which to guide strategic assumptions. Everyone “elected or appointed to an office of honor or profit in the civil service or uniformed services” is required to take the oath of office for this very reason. In doing so we assume the responsibility to safeguard our Constitution faithfully and diligently, not only the structure of the government it institutes but also the reasons for which it exists. Therein lies the key to our national philosophy in foreign affairs.

Abraham Lincoln, writing on the cusp of his inauguration and full-fledged civil war, articulates the philosophy that would guide his strategy to end slavery and preserve the Union. He describes the Constitution as a silver frame that surrounds and gives structure to an “apple of gold.” The apple is a single principle: “Liberty to all,” which according to Lincoln finds its fullest expression, rationale, and definition in the Declaration of Independence. Winston Churchill, even as an Englishman and not an American, agrees that “the great principles of freedom and the rights of man…find their most famous expression in the American Declaration of Independence.”

If Lincoln and Churchill are to be believed, then to swear an oath to support and defend the Constitution is to commit to the principles of liberty as defined by the Declaration. The US is unique in that the presuppositions that guide her foreign policy are articulated in the very document that gave birth to the nation. These self-evident truths are not mere rhetorical devices. They are the very ends for which our Constitution was framed and for which the US government exists.

The Declaration is essentially a foreign policy document. It presents the self-understanding of the American people to the world and defines how they expect to be treated. It asserts a uniquely American view of reality, ethics, and human nature. It shows respect for the opinions of the watching world by clearly outlining America’s justification for independence, revealing its signers’ appreciation of the important role international relations play in the life of a nation. It also attempts to persuade other nations, especially France, to support its cause.

Key to the Declaration’s concept of liberty is the assertion that all human beings are “created equal.” This does not mean similar in all, or even most, respects, nor does it mean equal in every way. If this were the case then government agencies would have to do away with performance evaluations, order of merit lists, and other ranking mechanisms. Instead it means all people possess the “same degree of dignity” by virtue of their humanity. This presupposition serves as the basis for the concept of inalienable rights, bestowed not by government but by nature and its Creator. Government can either safeguard or assail these rights, but it cannot take away from or add to them in any essential sense.

Though often imperfectly applied, this principle has guided the US in her strategies to account for and appreciate the value of non-American peoples as well as her own citizens. She has championed human rights on the world stage and is a trusted ally because of it, serving as an example of right and goodness. The vigorous prosecution of war crimes and advocacy on behalf of persecuted minority groups are but two examples of this principle in action.

The Declaration is clear that, while all people possess equal inherent dignity, one’s first responsibility is to one’s own countrymen. The implication for strategic assumptions follows easily. As foreign policy professionals pursue their strategies they must not only ask, “Is this good for all people?” but also, “Is this good for the American people?” A government that derives its powers from the consent of the governed is responsible for its citizens’ “Safety and Happiness” before anyone else’s. This does not mean isolation, but it does mean prioritization.

Respecting the tension that exists between universal human equality and duty to one’s own countrymen, the Declaration’s authors emphasize that they reached their decision to take up arms only after exhausting every diplomatic avenue available. It was not until their “repeated Petitions” had been answered by “repeated injury” that war became necessary. The American way is not one of conquest, but of assertiveness when necessary and peace when possible. For us might does not make right. Strength is only proper when subordinated to goodness and truth. It was not enough for the Declaration’s signers to affirm what circumstances “are,” detached from any moral considerations. They found their justification in recognizing what “ought to be.”

The closing lines of the Declaration do not qualify any of the preceding statements or build in any room for excuses for the potential failure of its enterprise. Its signers assume full responsibility for their actions and any consequences that follow. With “a firm reliance on the protection of divine Providence,” they commit in no uncertain terms to see the mission through or perish in the process.

This only scratches the surface of the vast cohesive and magnanimous philosophy to be gleaned from the Declaration by foreign policy professionals who seek to guide their strategic assumptions by foundational presuppositions. Strategic assumptions in support of cohesive foreign policy may only be made within the context of sound philosophy as a framework for action. Most importantly, if our oath to the Constitution means anything it means taking the Declaration’s philosophy seriously, for it is the very purpose of the Constitution we swear to support and defend.

Capt. Andrew Bibb is a civil affairs officer in the 82nd Airborne Division who has deployed to Iraq, Syria, Afghanistan, the Arabian Peninsula, and Latvia. His work has been published in Small Wars Journal, West Point’s Modern War Institute, the Civil Affairs Association’s Eunomia Journal, and the US Congressional Record. His work can be found at Engaged Awareness.

Capt. Andrew Bibb is a civil affairs officer in the 82nd Airborne Division who has deployed to Iraq, Syria, Afghanistan, the Arabian Peninsula, and Latvia. His work has been published in Small Wars Journal, West Point’s Modern War Institute, the Civil Affairs Association’s Eunomia Journal, and the US Congressional Record. His work can be found at Engaged Awareness.