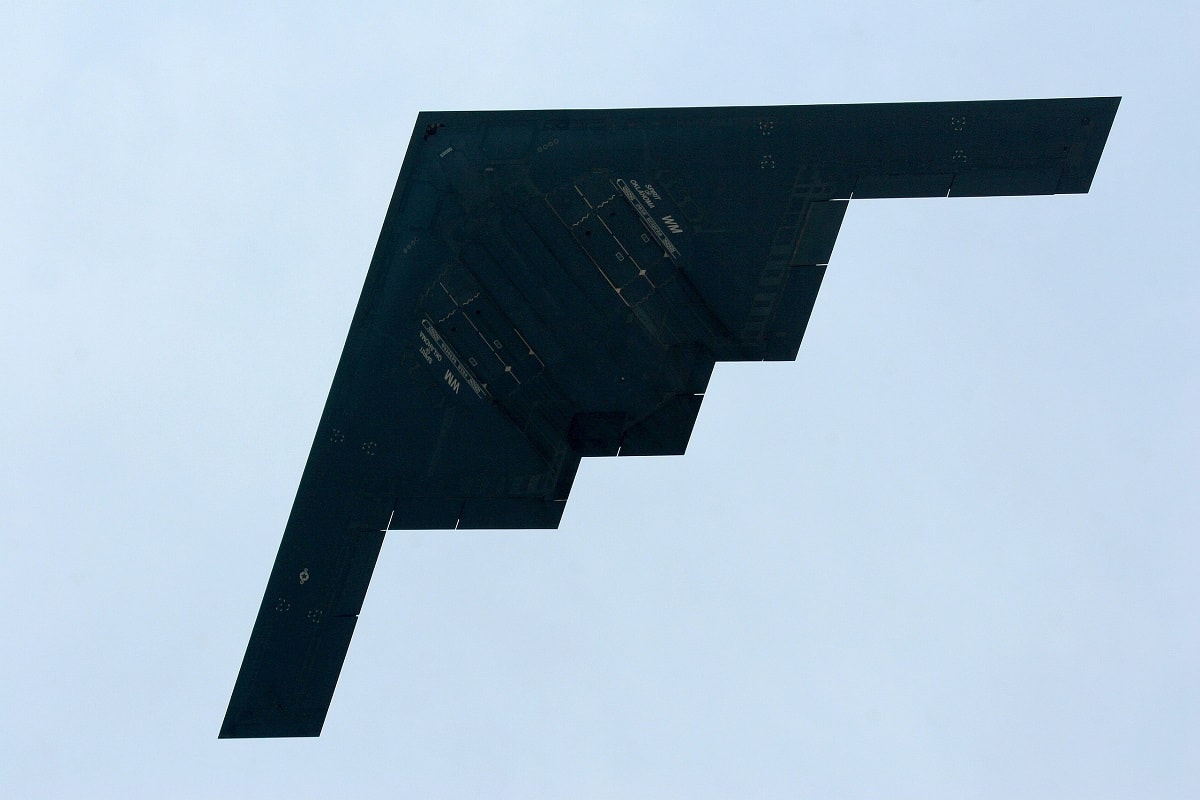 The B-2 Spirit, Spirit of Oklahoma, is silhouetted against the sky during the Thunder Over The Boardwalk Air Show, Atlantic City, N.J., Aug. 23, 2006. (U.S. Air National Guard photo by Tech. Sgt. Mark C. Olsen/Released) (This image was cropped to focus on the subject of the image)

In what might sound like a bit of alphabet soup, the U.S. Air Force Life Cycle Management Center’s (AFLCMC) B-2 Program Office is utilizing 3D printing to keep the stealth bombers flying. Also known as additive manufacturing, the technology has been used to create a protective cover that prevents unintentional activation of the airframe-mounted accessory drive (AMAD) decouple switch.

Each of the 20 B-2 aircraft in service with the Air Force has that four-switch panel AMAD that sits on the left side of the two-person cockpit. After one of the switches was accidentally activated, which resulted in the need for an emergency landing, the B-2 Program Office needed to come up with a solution, reported 3Dprint.com.

Instead of a complete redesign of the panel, which could have cost hundreds of thousands of dollars or more, each of the 20 new additively manufactured covers costs just $4,000 and these can be delivered to the fleet. While $4,000 for a simple cover might sound expensive, it should be remembered that at $2.2 billion per aircraft, the B-2 remains one of the most expensive warplanes ever built.

“This part [AMAD cover] is unique, and there was never a commercial equivalent to it, so we had to develop it in-house,” said Roger Tyler, an aerospace engineer with the B-2 Program Office. “Additive manufacturing allowed us to rapidly prototype designs, and through multiple iterations, the optimum design for the pilots and maintainers was created. We have completed the airworthiness determination and are currently in the final stages to get the covers implemented on the B-2 fleet, which will be the first additively manufactured part to be approved and installed on the B-2.”

The development of the covers was further aided by the Additive Manufacturing Design Rule Book, which was created by the AFLCMC Product Support Engineering Division.

“The rule book provides design guidelines and lessons learned in the additive manufacturing field, specifically the use of direct metal laser melting and fuse deposition modeling technologies,” added Jason McDuffie, chief, Air Force Metals Technology Office within the Product Support Engineering Division. “It has been used to help create a variety of important parts for the Air Force.”

As 3Dprint.com also reported, additively manufactured parts are providing the Air Force with a cost-cutting opportunity. 3D printed parts are being used for the F-35 Joint Strike Fighter and also for the aging B-52.

The Oklahoma City Air Logistics Complex (OC-ALC), an Air Force Sustainment Center wing, also produced the first additively manufactured metal component successfully tested on a U.S. Air Force aircraft engine. That has been a significant milestone for future sustainment of aircraft like the E-3 Airborne Warning and Control System and the B-52 Stratofortress.

The OC-ALC used additive manufacturing to create an anti-ice gasket for the TF33-P103 engine. That was the result of a collaborative effort between the 76th Propulsion Maintenance Group, the Reverse Engineering and Critical Tooling Lab and the Air Force Life Cycle Management Center Propulsion Sustainment Division. The gasket is a critical part of safe and efficient operation of the TF33 engine, which powers the E-3, the B-52 and the E-8 Joint Surveillance Target Attack Radar System.

Compared to the original component sourcing method, the new anti-ice gasket manufacturing process reduced administrative lead time, the amount of time between an initial contract and actual component manufacture, from 120-136 days to 14–21 days.

For the B-2 program 3D printing could prove to be more cost-effective due to the fact that a large number of each item isn’t actually required.

“Additive manufacturing is the way of the future,” added AFLCMC’s Tyler. “The B-2 is a low volume fleet. There’s only 20 (B-2 Bombers), so anytime something needs to be done on the aircraft, cost can be an issue. But with additive manufacturing, we can design something and have it printed within a week and keep costs to a minimum.”

In this article:B-2, B-2 Bomber, B-2 History, Military, NotHome, Stealth Bomber