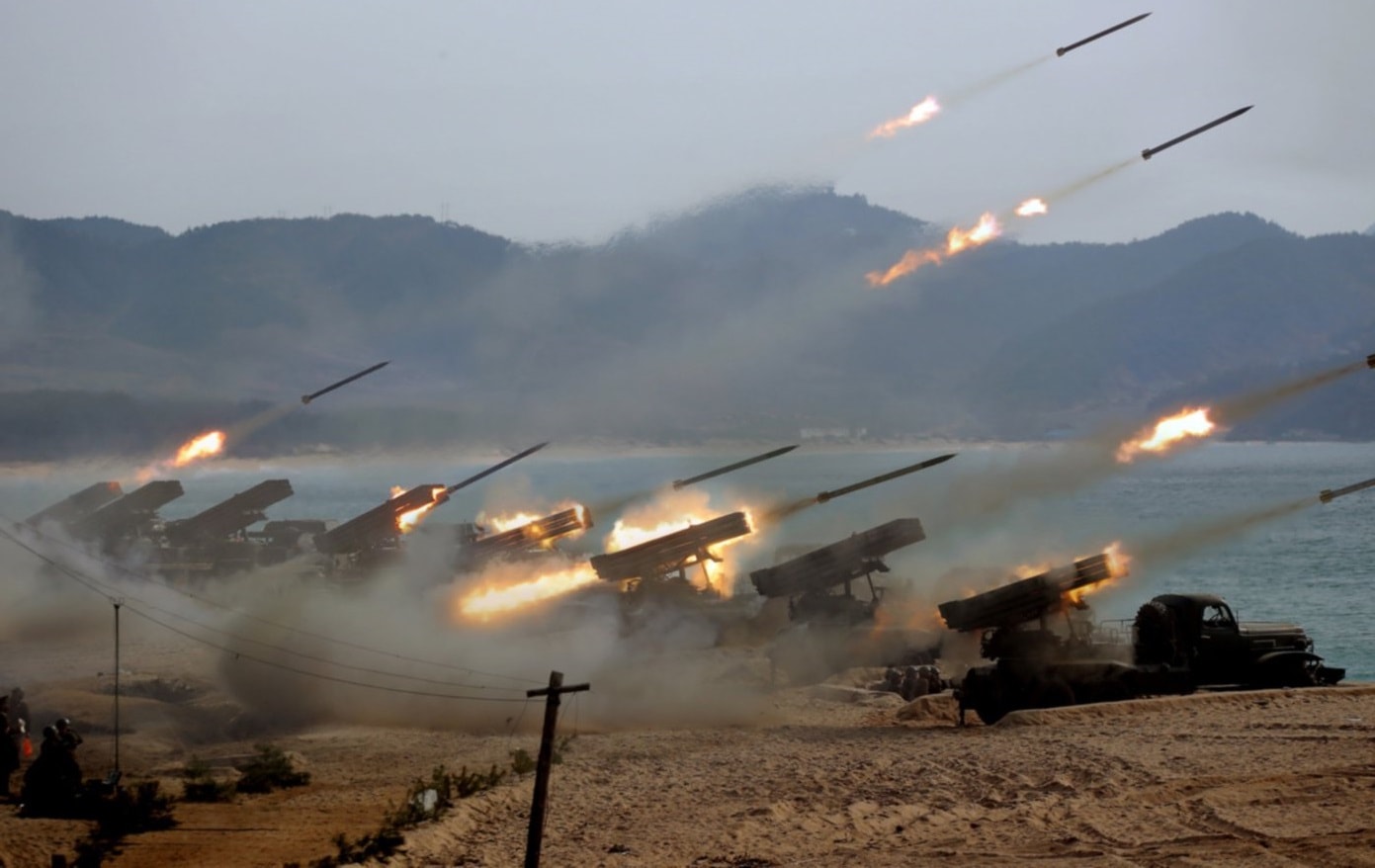 The Kim dynasty in North Korea has given its military a formidable task—maintaining a threat posture towards it dramatically wealthier neighbor to the south, which also happens to be allied to the greatest military power on the planet. It’s estimated that North Korea spends only between six and ten billion dollars annually on defense. That amount is over two orders of magnitude less than the United States does. But that spending amounts to roughly twenty-five percent of North Korea’s GDP, compared to between 3.5 percent for the United States

Given these stark disparities, the Korean People’s Army’s (KPA) leaders have arguably ceased planning to win a war versus the South, instead aiming to endure one. For example, the KPA has selectively invested in tactics and technology that would make such a conflict as painful as possible for South Korea, Japan and the United States.

Though North Korea only has a population of twenty-five million, the Korean People’s Army is amongst the largest in the world, counting around a million personnel. All adult males are mandatorily conscripted for three years of military service, and tens of thousands of women also volunteer to serve in ground, aviation and intelligence units, though conditions are reportedly brutal. There are additionally three to five million reservists in the Worker-Peasant Red Guard militia.

The KPA operates according to the Maoist concept of the “People’s War,” which advocates preparing for a lengthy struggle in which guerrilla warfare and asymmetric attacks bleed away a technologically superior foe. Furthermore, the state’s juche (“self-reliance”) ideology valorizes stoicism in the face of heavy losses, and self-sacrifice for the nation.

About 70 percent of the KPA’s ground forces are deployed within a few dozen miles of the heavily fortified Demilitarized Zone (DMZ) with South Korea, organized in several ‘echelons.’ Four infantry corps of four divisions each man the mountainous DMZ. To the rear, four mechanized corps, two artillery corps and a single armor corps are deployed from two reserve echelons to counterattack any enemy breakthroughs or to spearhead offensives. There is also a rear-deployed reserve of four infantry corps.

However, since the fourteenth century artillery has played an important role in the cramped and mountainous terrain of the Korean Peninsula. This means that the KPA has amassed over thirteen thousand howitzer and multiple-rocket launcher artillery systems, most of which are dug into Hardened Artillery Sights situated in caves and tunnels in the mountains along the DMZ.

These include over three hundred 170-millimeter Koksan super-long-range guns and various unguided heavy rocket artillery which serve as a conventional strategic deterrent by threatening to rain a “sea of fire” on the South Korean capital of Seoul, just thirty miles from the border. Realistically, sustaining such a bombardment would prove difficult, but so would destroying these well-fortified batteries before they kill thousands.

North Korea also maintains the largest Special Forces branch on the planet, with over two hundred thousand personnel. This reflects a longtime emphasis on infiltrating troops behind enemy lines—whether by submarine, hovercraft, motorboat, transport plane, American-built helicopters, underground tunnels, or even sneaking across the border on foot at night. In the event of a wider conflict, tens of thousands of operators would launch strikes behind South Korean lines, seeking to disrupt communication and supply lines, and sow panic and confusion. These operatives are trained to higher standards of marksmanship and have exhibited fanatical tendencies—on multiple failed infiltration missions they have killed themselves and other North Koreans rather than surrender.

Some North Korean agents are also trained about life in the outside world (with instruction provided by kidnapped foreigners) and are dispatched to perform operations abroad. Over the years, agents abroad have perpetrated two failed assassinations attempts on South Korean presidents (1968 and 1984), a terrorist bombing of a South Korean airliner, the likely murder of a South Korean diplomat in 1996, and the murder of Kim Jong-un’s half-brother in 2017 via nerve agent.

The Korean People’s Army Navy (KPAN) is a brown-water force capable only of short-range operations. It counts around six hundred small patrol boats divided on opposite sides of the Korean peninsula, with six squadrons in its West Fleet and ten in the North Fleet. The KPAN’s most capable surface combatants are a hodgepodge of old, gun-armed frigates and corvettes and a few dozen missile-armed fast attack craft.

No match for larger U.S. and South Korean warships, these would instead be used in swarming attacks, or to insert troops and agents behind South Korean lines. Towards that end, the KPAN fields exotic vehicles, including semi-submersible motor boats and 140 hovercraft for amphibious operations. North Korean surface warships also engaged in three skirmishes with South Korean boats between 1999 and 2002.

KPAN’s most prized asset are its seventy submarines, technically the largest sub fleet in the world. However, fifty of these are very small and slow midget submarines suitable only for very short-range operations, and another twenty are slightly higher-endurance Romeo-class diesel submarines dating back to the 1950s. However, the very shallow, cold and rocky waters around the Korean peninsula could still make these noisy submarines difficult to detect, and thus a threat to more powerful vessels. Indeed, in 2009 the South Korean corvette Cheonan was sunk by a torpedo likely fired by a KPAN mini-submarine. North Korea has also tested a Pukkuksong submarine-launched ballistic missile, and is reportedly building a Sinpo-class ballistic missile submarine to carry it.

The Korean People’s Army Air Force has not aged well, consisting mostly of hundreds of obsolete Chinese-made J-5, J-6 and J-7 fighters (derived from the 1950s-era MiG-17, MiG-19 and MiG-21 respectively). The KPAF’s most prized assets constitute 26 early fourth-generation MiG-29 single-seat fighters in the 57th Regiment and over fifty third-generation MiG-23 swing-wing fighters. The Air Force also has a substantial but rusty ground attack inventory including eighty 1950s-vintage Il-28 Beagle jet bombers, some Su-7 attack jets, and a few dozen more modern Su-25 Frogfoots. These are supplemented by two dozen Hind helicopter gunships and eighty scout helicopters smuggled from the United States retrofitted with Russian missiles. Most estimate that KPAF pilots fly only a couple dozen hours a year, compared to well over a hundred in the U.S. or South Korean air forces.

The most viable role for the aging aerial force might be to swarm over the DMZ at low altitude to hit airbases, artillery positions and logistical centers deep in South Korea. Though they would suffer very heavy losses, they could still inflict substantial damage and prove difficult to track and eliminate. In fact, the NKPAAF still operates hundreds of ancient An-2 biplane transports to launch sneaky low-altitude, low speed attacks and to land Special Forces behind the frontline—tactics that proved effective during the Korean War.

North Korea’s most important military capabilities may come from its Strategic Rocket Force, equipped with hundreds of ballistic missiles. The majority are short-range Scud-derivatives on difficult-to-hunt-down mobile launchers, but Pyongyang also possesses a tier of medium and intermediate-range ballistic missiles that can strike Japan and U.S. Pacific island bases. Finally, in 2017, Pyongyang tested Hwasong-14 and Hwasong-15s intercontinental ballistic missiles which should be able to strike any city in the United States. It displayed in 2020 a new Hwasong-16, although it has not been tested as of yet.

Intelligence sources estimate North Korea has material for sixty nuclear warhead. After multiple test detonations of a yield of ten kilotons or fewer, in 2017 North Korea apparently detonated a hydrogen bomb with a 140-ton yield. However, it’s not clear how much progress has been made miniaturizing the warheads to fit inside a missile.

Although ballistic missiles could deal extensive damage to U.S., Japanese and South Korean military bases, their ability to threaten civilian population centers is ultimately far more important. South Korea and the United States can clearly defeat the North Korean military in a conflict, but the prospect of missiles raining on Seoul, Tokyo and Los Angeles, potentially armed with nuclear or chemical warheads, makes any such conflict unacceptably costly by any sane calculation. While South Korea, the United States and Japan have all deployed air defenses designed to shoot down such missiles, it would only take one nuclear missile landing in a metropolis to kill tens of thousands or worse.

While the North Korea once nearly conquered the South in just a few weeks, today it’s that its military has no hope of defeating its much wealthier and more populous southern neighbor—let alone do so while fighting off U.S. forces. Instead, Pyongyang has built up its capabilities to make a renewed conflict as unacceptably costly to the citizens of its adversaries as possible. This is both to serve as a deterrent from attack, but also as a bargaining chip to boost the impoverished nation’s international clout and leverage economic assistance vital to sustaining its economy, thus keeping the Kim family safely in power.