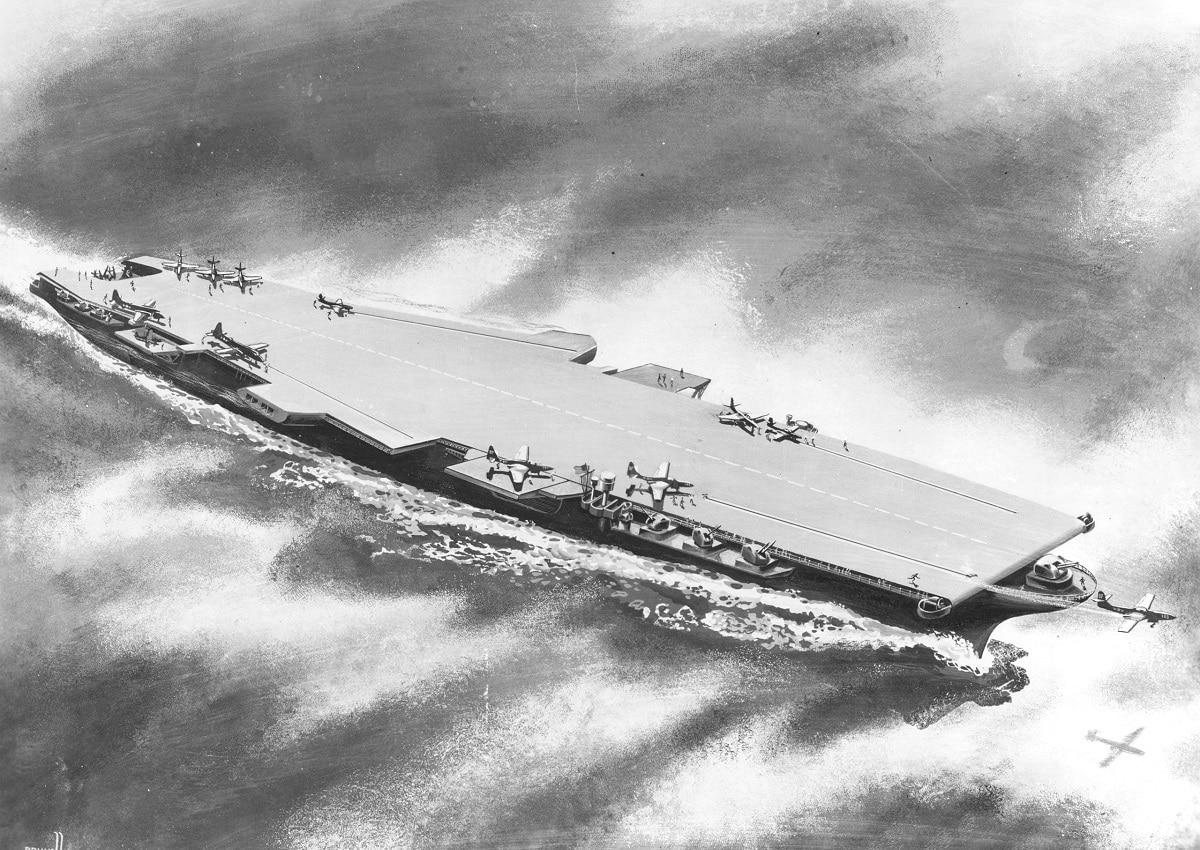 Artist's conception of the U.S. Navy aircraft carrier USS United States (CVA-58) by Bruno Figallo, October 1948, showing the ship's approximate planned configuration as of that time. Many details, among them the location of smoke stacks, elevators and the retractable bridge, were then still not finally decided. This carrier was laid down at Newport News, Virginia (USA), on 18 April 1949 and cancelled by the Secretary of Defense a few days later.

In the wake of the mushroom clouds that blossomed over the Japanese cities of Hiroshima and Nagasaki, it swiftly dawned on political and military leaders across the globe that warfare between superpowers would never again be the same. But what exactly were the implications of nuclear weapons when it came to planning military force structure?

In the United States, it was assumed that nuclear weapons would be widely employed in future conflicts, rendering conventional land armies and fleets at sea irrelevant. The newly formed Air Force particularly argued that carrier task forces and armored divisions were practically obsolete when (ostensibly) just a few air-dropped nuclear bombs could annihilate them in one fell swoop.

The Air Force touted its soon-to-be operational fleet of ten-thousand-mile-range B-36 Peacemaker nuclear bombers as the only vital war-winning weapon of the nuclear age. This logic resonated conveniently with the postwar political program mandating sharp cuts to U.S. defense spending and force structure—which the Air Force naturally argued should fall upon the Army and Navy.

In 1945, the Navy began commissioning three larger forty-five-thousand-ton Midway-class carriers which incorporated armored flight decks for added survivability. The decks were swiftly modified to angular, effectively lengthened configuration for jet operations. Neptune P2V-C3 maritime patrol planes converted into nuclear bombers could take off from Midway-class carriers using rocket-pods but would have no way landing on the carrier deck.

Therefore, the Navy decided it needed huge supercarriers from which it could operate its own fifty-ton strategic bombers. These would displace over 40 percent more than the Midway at sixty-eight thousand tons, and measure 12 percent longer at 330-meters. In July 1948, Defense Secretary James Forrestal approved plans for five such carriers, the first named USS United States with hull number CVA-58.

The naval heavy bombers (which didn’t exist yet) were expected to have such wide wings that naval architects decided that CVA-58 would have a completely flush deck without the standard “island” superstructure carrying a radar and flight control tower. Instead, the carrier would feature side-mounted telescoping smokestacks that could be raised should smoke impeded flight operations, and a similarly retractable wheelhouse that could be extended to observe navigation and flight operations.

The ship’s air wings would include twelve to eighteen heavy bombers that would mostly remain parked on the flight deck, exposed to the elements. Four side-mounted elevators would ferry forty to fifty-four jet fighters between the hangar and flight deck to escort the bombers. Eight nuclear bombs per heavy bomber would also be stowed in the hangar. The combined ship’s company and airwing would total 5,500 personnel.

Because the ship would be effectively blind without an elevated radar and control tower, a separate cruiser was intended to serve as the carrier’s “eyes.” Nonetheless, CVA-58 still incorporated eight 5-inch guns for air defense, and dozens of rapid-fire short-range cannons.

The “Revolt of the Admirals”

Though theoretically capable of contributing to conventional strike and sea control missions, the heavy bomber-equipped CVA-58 was clearly an attempt by the Navy to duplicate the Air Force’s strategic nuclear strike capabilities.

This put giant crosshairs on the program during an era of sharp defense cuts. After all, deploying strategic bombers at sea was many times more expensive than basing them on land.

Following his reelection in November 1948, President Harry Truman replaced Forrestal—a naval aviator in World War I, and former secretary of the Navy—with Louis Johnson, who had fewer qualms about enforcing defense spending cuts.

In April 1949, just five days after CVA-58’s fifteen-ton keel was laid down in Newport News, Virginia, Johnson canceled the mega-carrier. He also began advocating dissolution of the Marine Corps, starting by transferring its aviation assets to the Air Force.

This upset the Navy bigwigs so much that Navy Secretary John Sullivan resigned, and numerous admirals began openly opposing the termination of a project they viewed as essential to validating their branch’s existence in the nuclear age.

This “Revolt of the Admirals” developed into a crisis in civil-military relations, as the Navy’s top brass defied the authority of their civilian commander-in-chief and resorted to covert methods in an attempt to influence public opinion. The Op-23 naval intelligence unit formed by Adm. Louis Denfeld secretly circulated a memo called the Worth Paper alleging that Johnson had corrupt motivations due to being a former director of Convair, manufacturer of B-36 bombers, which were also claimed to be deficient.

The bitter inter-service rivalry, and the utility of land-based bombers versus carriers, was publicly litigated in congressional hearings. The Army also piled on against the Navy, and public opinion turned against the sea-warfare branch as Op-23’s activities were revealed.

As Gen. Douglas MacArthur would later discover, Truman had no qualms about squashing military leaders that questioned his authority. His new secretary of the Navy, Francis Matthews, torpedoed the career of several admirals that spoke against the CVA-58’s termination despite an earlier promise that those testifying before Congress would be spared retaliation.

The irony of this tempest in a teacup, which resulted in the political martyrdom of many senior Navy leaders, was how misguided both sides swiftly proved to be.

In June 1950 the Korean War broke out, and the U.S. found itself desperately short of the necessary conventional land, air and sea forces. U.S. aircraft carriers and their onboard jet fighters soon bore the brunt of the initial fighting, and continued to play a major role until the end of the conflict.

And the Air Force’s vaunted B-36s? They never dropped a single bomb in anger—fortunately, as they were only intended for use in apocalyptic nuclear conflicts.

It turned out that plenty of wars were liable to be fought without resorting to weapons of mass destruction.

However, the Navy also had cause to count itself fortunate that the CVA-58 had been canceled. That’s because in just a few years the size of tactical nuclear weapons rapidly decreased, while high-thrust jet engines enabled hauling of heavier and heavier loads. By 1950, nuclear-capable AJ-1 Savage hybrid jet/turboprop bombers were operational on Midway-class carriers, starting with the USS Franklin Roosevelt. 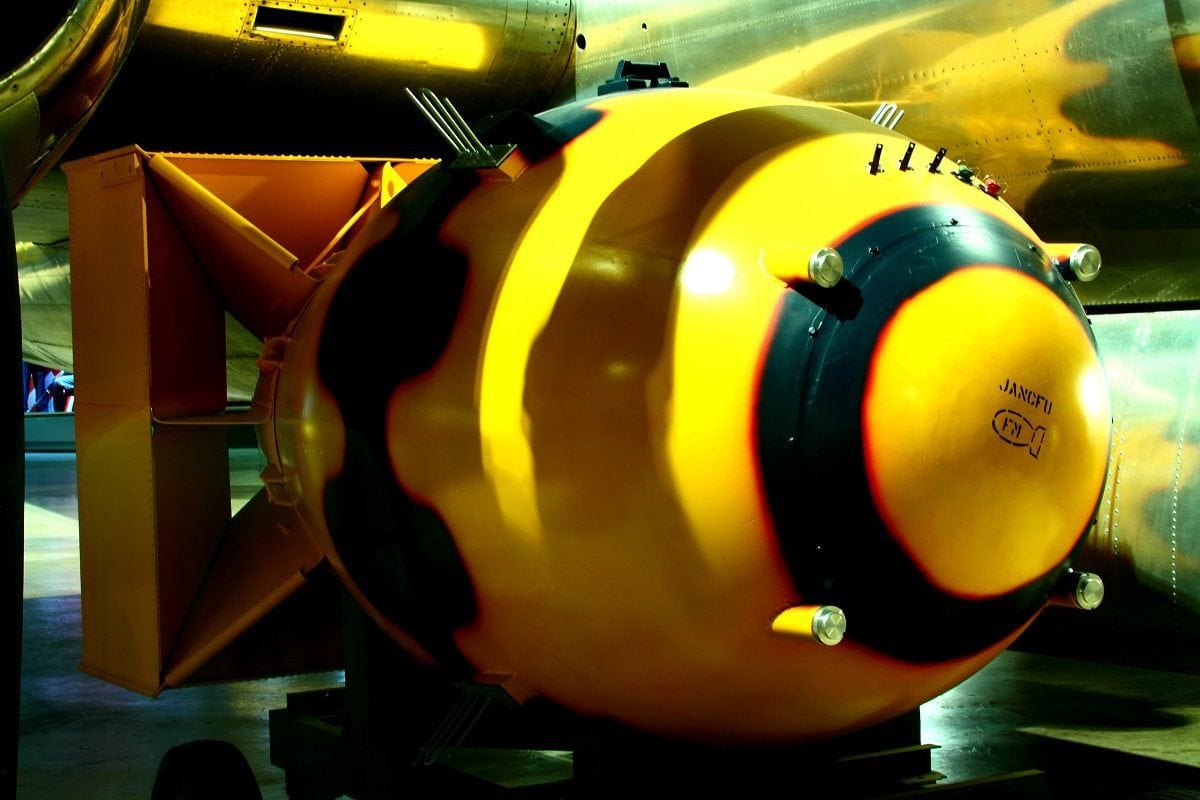 These were soon followed by nuclear-capable capable A-3 Sky Warrior and A-5 Vigilante bombers, A-6 and A-7 attack planes, and even multirole fighters like the F-4 Phantom II. Carriers with these aircraft were far more flexible than a CVA-58 full of B-36 wannabees ever could have been. Arguably, by the 1960s the Navy’s ballistic missile submarines would amount to scarier strategic nuclear weapons than any aircraft-based delivery system.

The schematics for CVA-58 nonetheless informed the Navy’s first supercarriers, named rather appropriately the Forrestal-class, laid down during the Korean War. But the heavy-bomber carrying United States remains notable as the supercarrier the Navy absolutely thought it needed—but which with literally just a couple years more hindsight it discovered it truly could do without.