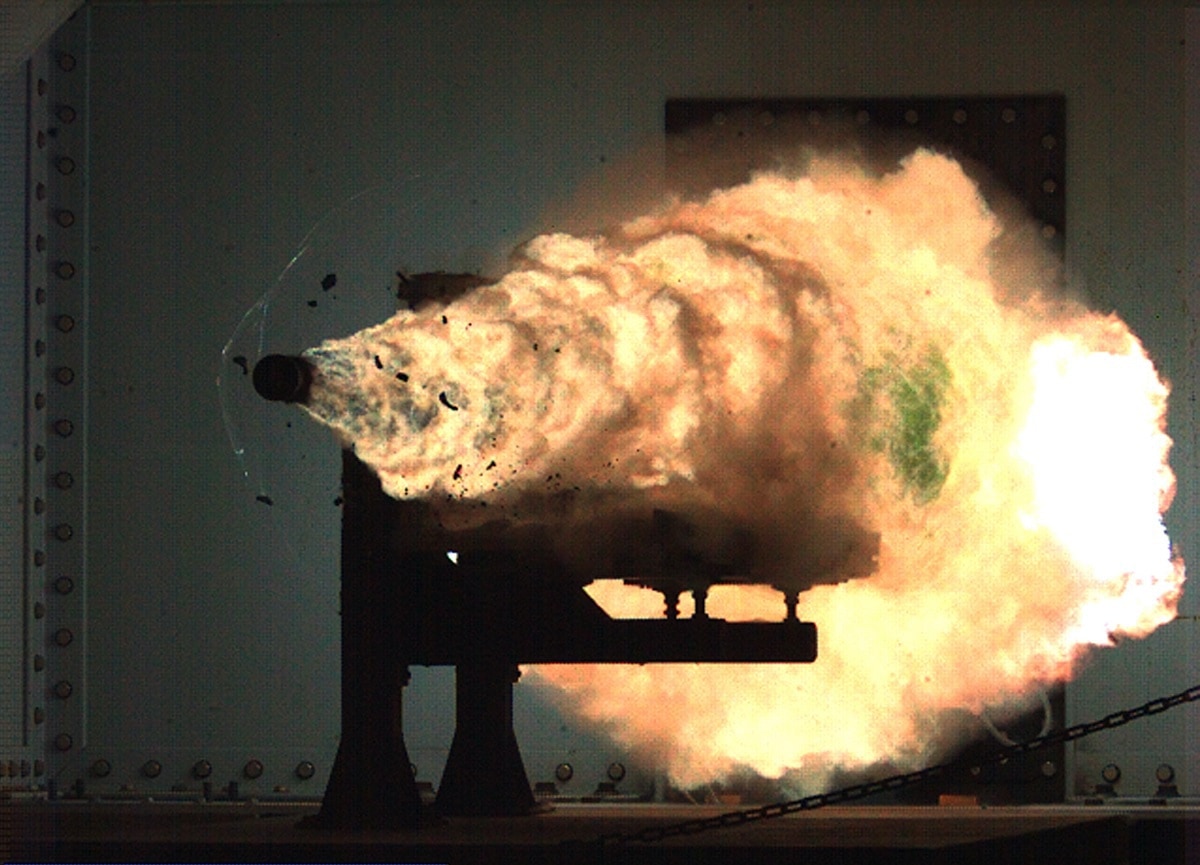 Last month the United States Navy scaled back its efforts and could end efforts to develop and electromagnetic railgun (EMRG), a weapon that wouldn’t be out of place in a futuristic science fiction movie or video game. To date the U.S. Navy has spent some $500 in RYD efforts. The Navy’s EMRG project was first conceived in 2003.

Across the Pacific, Chinese efforts to develop a ship-mounted EMRG is still moving forward, and in 2019 it was reported that such a weapon could be “capable of striking a target 124 miles away of speeds of up to 1.6 miles per second.”

EMRG is unlike traditional artillery-based weapons in that it utilizes no gunpowder. It is essentially a large electric circuit that is made of three parts including a power supply, a pair of parallel rails and a moving armature. Electrical currents generate magnetic fields that can accelerate a projectile along two rails. The power supply is actually rather basic and is just the source of electric current – and in this case is in the millions of amps.

The two rails are made of lengths of a conductive metal such as copper, and these can range from four to 30 feet; while the armature bridges the gap between the rails. It could be a solid piece of conductive metal or a conductive sabot, a carrier that houses a dart or other projectiles. EMRG do require tremendous currents to fire projectiles at speeds of Mach 5 or higher, and this presents a problem for modern warships because power cannot be diverted from the ship’s propulsion system.

However, in theory, an EMRG should be cheaper than missile-based systems such as a $1.4 million Tomahawk missile; while at the same time the EMRG could offer greater range and couldn’t be shot down or jammed. Warships such as the new USS Zumwalt stealth destroyer could use such a weapon and more importantly could provide the necessary “juice” – the ship’s induction motors can generate 58megawatts of electricity while cruising.

An EMRG onboard could solve another problem that the Zumwalt needs to overcome – namely its ridiculously expensive ammunition. A single Long Range Land Attack Projectile costs around $1 million, and the program has been shut down leaving the stealthy destroyer without its advanced weapons system!

While the U.S. Navy has spent more than a decade pursuing this technology and now seems to have put it on the backburner – even if that will still cost an additional $9 million for fiscal year 2021 – the Chinese have been continuing to move forward. China may have even made a breakthrough to make the weapon feasible, a fact that still isn’t certain, but as the Chinese People’s Liberation Army Navy (PLAN) has conducted a number of tests it is clear this isn’t on the backburner in Beijing.

This included a photo from a couple of years ago that was circulated online and reportedly showed a “railgun-esque gun” mounted on the bow of the Type 072III-class landing ship Haiyang Shan. While that may suggest the Chinese PLAN has tested the technology the lack of subsequent demonstrations could also be an indicator that this technology is headed nowhere slow for the Chinese.

The question does become whether this matters. It could give the Chinese a technological edge, but repeatedly throughout history, it has been shown that being first doesn’t mean best. It is always easier to “acquire” the technology and copy it, and then there are issues of whether such a weapon is worth the investment. Could the money be spent on other R&D or even hardware efforts?

In this article:China, Military, PLAN, Railgun, Railguns, US Navy