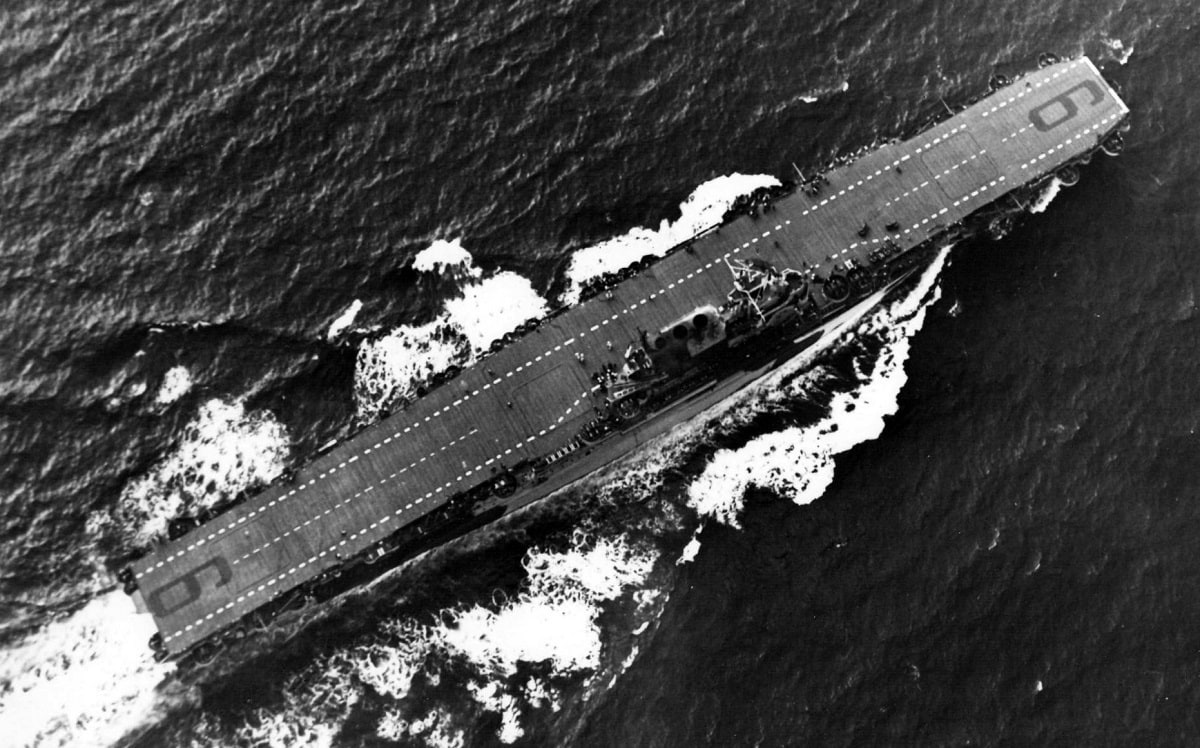 In May 1938, the U.S. Navy commissioned the aircraft carrier USS Enterprise, the seventh ship to bear the name in American service. The second of three sisters, Enterprise made a central—perhaps the central—contribution to the war effort in 1942. The U.S. Navy began 1942 with six fleet carriers (excluding the small Ranger, which served in the Atlantic). Over the course of the year, Japanese aircraft and submarines would sink four of those carriers and put a fifth (USS Saratoga) out of action for long periods of time. Enterprise fought with distinction in most of the major battles of 1942, and survived to contribute for the rest of the war.

In short, USS Enterprise (CV-6) was the finest ship ever to serve in the U.S. Navy.

Second ship of the Yorktown class, Enterprise was laid down in July 1934. The Yorktowns constituted the greater part of the second generation of U.S. fleet carriers, after the experimental ships and the conversions of the 1920s. Experience with USS Ranger and the Lexingtons indicated that large carriers had many advantages in serviceability and survivability over smaller ships, so the Navy decided to go large. Enterprise displaced twenty-five thousand tons, could make thirty-three knots and could comfortably carry around eighty combat aircraft. U.S. naval architects incorporated many of the lessons learned from the Lexington class into the Yorktowns, and they became the world’s most advanced, effective carriers when they entered service in the late 1930s. They would provide a template for the Essex-class aircraft carriers, which would begin joining the U.S. Navy in 1943.

USS Enterprise joined the Pacific Fleet in 1939, and operated in a variety of roles in the years immediately preceding the war. Having just ferried aircraft to Wake Island, it narrowly missed the Japanese strike on Pearl Harbor, arriving on the evening of December 7, and putting back to sea shortly thereafter to (fruitlessly) search for the Japanese task force. On December 8, its aircraft found and sank the Japanese submarine I-70. Across the winter and early spring of 1942, Enterprise raided across the Pacific, striking Japanese installations on several recently acquired islands. In April, it escorted USS Hornet on the Doolittle Raid, only narrowly missing the Battle of Coral Sea on its return.

In late May, Enterprise sortied to intercept the expected Japanese invasion of Midway Island. Serving with its sisters Yorktown and Hornet at Midway, its dive bombers helped destroy four Japanese carriers, along with a heavy cruiser. This victory broke Japanese momentum in the Pacific, but did not offer any rest to Enterprise, especially as Yorktown had sunk during the battle.

By mid-July, Enterprise had sailed the South Pacific, where it served throughout the Solomons campaign, taking damage at the Battle of the Eastern Solomons and at the Battle of Santa Cruz (its last sister, Hornet, was destroyed in the latter battle). Despite this damage, it left the action only briefly for repairs, continuing the fight for almost the entirety of 1942 and early 1943. Its aircraft helped destroy HIJMS Hiei in November.

As the Essex class carriers began to come into service in 1943, Enterprise’s importance to the war decreased. A four month overhaul in mid-1943 helped bring it back to full combat effectiveness. Enterprise contributed to the great carrier actions of 1944, fighting at the Battle of Philippine Sea and the Battle of Leyte Gulf. These battles tore out the heart of the Japanese carrier fleet, and also led to the destruction of several battleships.

In late 1944, Enterprise re-equipped for night operations, pioneering Navy efforts to maintain air superiority around the clock. It supported U.S. operations on Iwo Jima and eventually Okinawa, suffering damage from two kamikaze attacks in the latter. Its repairs from the final attack were completed just as the war in the Pacific ended; the most important single warship of the war, it nevertheless missed the Japanese surrender in Tokyo Bay.

Enterprise’s first duty in the immediate postwar period was to help return U.S. servicemen to the United States. It left service permanently in early 1946; although only ten years old at this point, Enterprise had been superseded by the Essex class and the much larger Midway-class carriers. Unlike its sometimes partner USS Saratoga, Enterprise was spared destruction in the Bikini atom bomb tests. Instead, it entered the reserve fleet.

Enterprise won twenty battle stars in the Pacific, more than any other U.S. ship. There was widespread recognition of its service, and several efforts to preserve it as a monument. Despite the advocacy of retired Navy personnel, however, these efforts failed, and it was sold for scrap in 1958. This is now recognized by many as a tragic failure of the United States to properly maintain its military heritage; in the years after Enterprise’s scrapping, several other battleships and aircraft carriers were preserved.

Shortly before USS Enterprise went to the breakers, a new ship bearing the name was laid down; CVN-65, the world’s first nuclear aircraft carrier. The latter USS Enterprise served for fifty years, before decommissioning in 2012. Another USS Enterprise, CVN-80, is scheduled for completion by 2025.

An altogether unforeseeable event immortalized the name even more. In 1965, Gene Roddenberry gave the name Enterprise to the starship of his series Star Trek. Just as CV-6 survived combat situations that destroyed other carriers, NCC-1701 would survive wildly improbable scenarios. The wild, and unpredictable, success of that series and its spinoffs would lead to a variety of other Enterprises, each with the same improbable success as their World War II namesake.

Dr. Robert Farley has taught security and diplomacy courses at the Patterson School at the University of Kentucky since 2005. He received his BS from the University of Oregon in 1997, and his Ph.D. from the University of Washington in 2004.  Dr. Farley is the author of Grounded: The Case for Abolishing the United States Air Force (University Press of Kentucky, 2014), the Battleship Book (Wildside, 2016), and Patents for Power: Intellectual Property Law and the Diffusion of Military Technology (University of Chicago, 2020). He has contributed extensively to a number of journals and magazines, including the National Interest, the Diplomat: APAC, World Politics Review, and the American Prospect. Dr. Farley is also a founder and senior editor of Lawyers, Guns and Money.