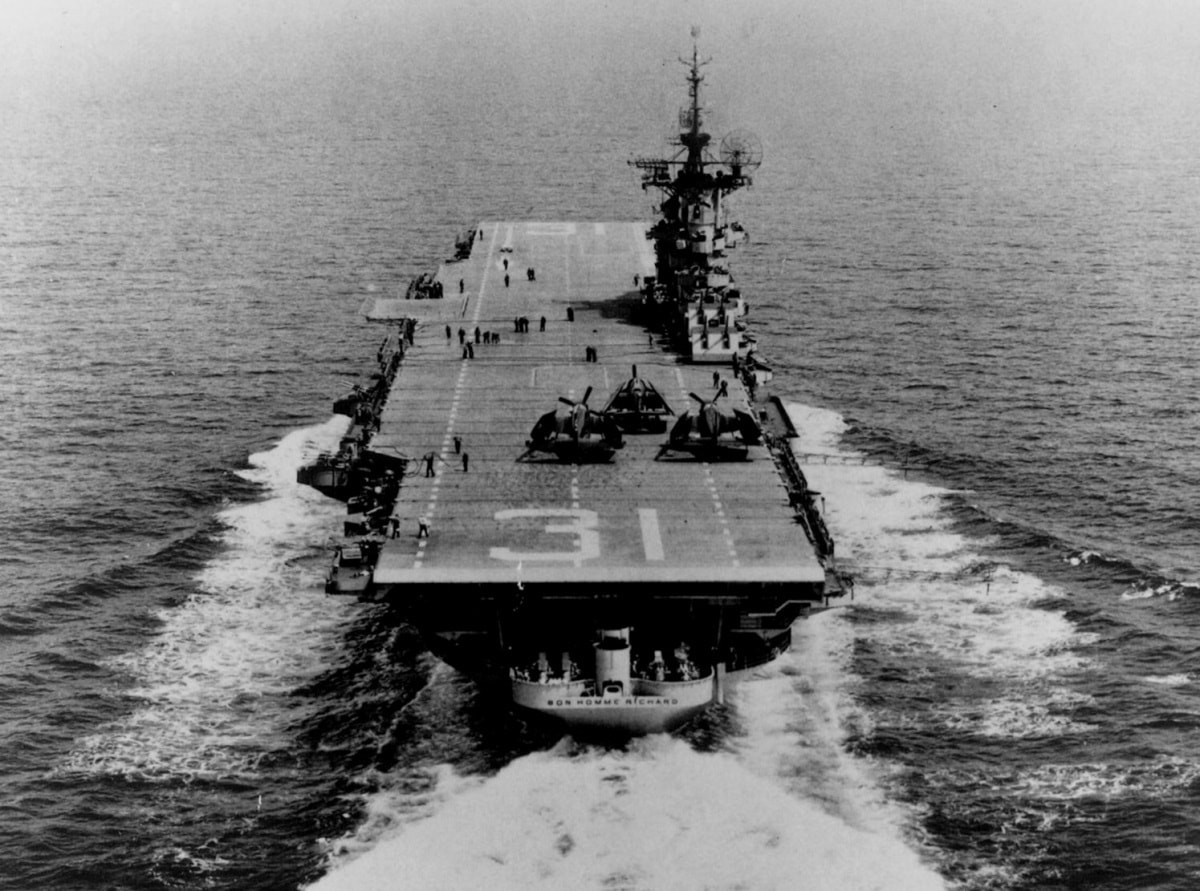 The idea of a ship class, a series of vessels constructed to essentially the same design, is a hallmark of the industrial age of naval warfare.  Prior to the emergence of the industrial age, individual ships represented the craftsmanship of different yards, and the relationship between design and construction allowed specific builders a great deal of latitude. As the industrial revolution overtook naval architecture, it became easier to create a specific template for the construction of a series of ships that would have effectively the same capabilities, regardless of which shipyard they emerged from or what time they entered service.

This article focuses on five of the most lethal classes of warships to sail the seas. The list concentrates on the first half of the 20th century, a period that saw the two most destructive naval wars in history.  Given that an effective naval campaign requires a distribution of different ship types, the list offers one each from the five major types of the era; aircraft carrier, battleship, cruiser, destroyer, and submarine.

From experience with the Lexington and Yorktown class carriers, the United States Navy (USN) concluded that it would require a class of large, fast carriers to dominate the Pacific and hold the Atlantic. The result, an evolutionary leap from the Yorktowns, was the Essex class. Displacing 28,000 tons, each Essex could comfortably carry a powerful strike group of ninety aircraft.

USS Essex entered service in December 1942, with another six joining the fleet in 1943. The class formed the core of the war-winning offensive into the Japanese-controlled Pacific between 1943 and 1945. The ships were critical to the victories at Philippine Sea and Leyte Gulf, victories which destroyed the fighting power of the Imperial Japanese Navy.

The United States eventually built 24 Essex class ships, with some significant modifications along the way.  Another eight ships were cancelled.  Despite devastating damage inflicted by Japanese kamikazes, none were lost to enemy action. After the war, most of the Essex class remained in front line service, with many of the ships receiving extensive modification into a variety of configurations.  Some became assault carriers, others anti-submarine carriers, while still others were configured for an attack role.

By the 1970s, the USN began to retire the Essex class en masse. The elderly frames required increasingly costly maintenance, and the flight decks could no longer handle the most advanced carrier aircraft. The last Essex to remain in service was USS Lexington, acting as a training carrier until 1991. Four remain as memorials; USS Intrepid in New York, USS Yorktown in Charleston, USS Hornet in Alameda, and USS Lexington in Corpus Christi.

The Queen Elizabeths were a revolutionary leap in a period of immense growth and innovation in battleships construction.  4000 tons larger than their immediate predecessors, the five Queen Elizabeth class battleships carried 8 15” guns, largest in the world at the time. They could make 2-3 knots faster than most foreign contemporaries, and maintain that speed because of their oil-fired boilers.  To compensate for the lack of coal bunkers, they carried a heavy armor scheme that would help them survive two world wars.

Battleship architecture was an unforgiving art; advanced designs became obsolete in less than a decade. The QEs endured the test of time, contributing decisively to British naval power in both World Wars. But the speed of the ships and the flexibility of the design meant that they could benefit from significant modification. Three of the five QEs entered World War II service after a massive renovation which transformed them into nearly modern units.

Consequently, the QEs were involved in nearly every important British naval action for thirty years.  Queen Elizabeth led the British attack on the Dardanelles. Four of the ships constituted the Fifth Battle Squadron at Jutland, dealing devastating damage to the German battlecruisers while coming under heavy fire from the battleships of the High Seas Fleet. In World War II they served in the Atlantic, in the Norway campaign, in the Mediterranean, at Normandy, and finally in the Pacific. Only one ship, HMS Barham, was lost to enemy action (a U-boat), although several of the rest incurred serious damage from a variety of causes over the course of two wars.

Before World War I, the role and value of the submarine was uncertain. The Royal Navy (RN), along with many of its counterparts, concentrated on the threat that submarines might pose to the fleet.  A few devastating losses notwithstanding, the RN did an excellent job in protecting its major units from submarine attack. Indeed, HMS Dreadnought sank more submarines in the First World War (one, by ramming) than submarines sank dreadnoughts, in all theaters of conflict.

Subs would find their true value in an anti-commerce role. Germany engaged in widespread, devastating attacks against Allied merchant ships in the first year of the war, stepping back because of American protests.  In 1917, as part of a go-for-broke strategy to drive the United Kingdom from the war, Germany announced a resumption of unrestricted submarine warfare. The U-31 class was well-positioned to have a devastating effect.

Although small and unsophisticated by the standards of World War II, the eleven boat U-31 class boasts four of the top five killer submarines in history. Built between 1912 and 1915, the U-31s were medium-size, seagoing boats, displacing about 800 tons. The U-31 boats represented an evolutionary improvement over previous German efforts.  They had good range, a deck gun for destroying small shipping, and decent speed on the surface.

Thus, the U-31s were primed to take advantage of both of the periods of unrestricted operations. They made most of their kills in or near British coastal waters, before the Royal Navy instituted its convoy system. They also operated in the Med, feasting upon unprepared merchant shipping. U-35, the top killer, sank 224 ships amounting to over half a million tons.

The opening of the second period of unrestricted warfare opened the door to US entry into the war.  Soon after, the Royal Navy and the British merchant shipping industry acquiesced in the development of the convoy system, which dramatically reduced losses.  The United Kingdom survived, and the Allies took the knowledge of how to fight U-boats into the next war.  Three of the eleven U-31 boats survived the war, including U-35.

Of all the devastating warships that the Imperial Japanese Navy (IJN) brought to the Pacific in 1941, the Kageros and their destroyer kin were among the most impressive.  Concentrating on developing a qualitative, ship-to-ship advantage, the Japanese attempted to develop destroyers that could not only sink their counterparts in the RN and the USN, but that could also kill cruisers and battleships. This led the IJN to develop a series of powerful destroyers, culminating in the pre-war Kagero class.

Armed with six 5” guns in three twin turrets, the eighteen Kageros could outgun all but the largest French destroyers of the era, and the French super-destroyers had better things to do than wander the Pacific.  The true threat of the Kageros, however, was the 24” “Long Lance” (Type 93) torpedo, a weapon the class shared with most other Japanese destroyers and cruisers.  These oxygen-fueled torpedoes could travel over 40000 yards, and cause grievous damage when they struck their targets.  The Kageros were solidly built, and carried decent anti-aircraft and anti-submarine armaments for their era.

Despite this, only one Kagero survived the war.  Yukikaze, which accompanied HIJMS Yamato on the latter’s suicidal final mission, later became flagship of the navy of the Republic of China.  She reputedly transported Chiang Kai Shek to Taiwan in the final months of the Chinese Civil War, and later played an important role in defending the island from Chinese invasion.  She was scrapped after running aground in a storm in 1970.

The Royal Navy had not intended to go down this route with the Towns, hoping that the restrictions of the London Naval Treaty would produce a smaller class of ships.  The United States and Japan, however, immediately committed to producing huge “light” cruisers, sporting 15 6” guns each. The British responded with the nine ships of the Town class, divided into three sub-classes.  Displacing about 12000 tons, the Towns carried 12 6” guns, as well as good anti-aircraft and torpedo armaments.

The Towns served in nearly every meaningful engagement of World War II.  Towns hunted German raiders and blockade runners in the South Atlantic; they escorted convoys to Malta under harsh German and Italian bombardment; they covered the British escape from Crete; they struck at the Regia Marina as it tried to protect its Libyan convoys; they fought German ships and planes off Norway;  they helped hunt and kill Bismarck and Scharnhorst; they supported the landings at Normandy; and they added firepower to the British offensive into Japanese-held Southeast Asia. Three were lost in the Mediterranean, and one in the Arctic.

After the end of World War II, the Towns continued to serve.  Several contributed fire support in Korea and elsewhere, including Suez and Malaya. One ship, HMS Belfast, survives as a war memorial on the Thames.

States have changed the way in which they approach the ship “class.”  The ten Nimitz class aircraft carriers were built over a period of forty years, with the newest ships incorporating innovations that were unimaginable in older vessels.  The Flight III Arleigh Burke destroyers will share a name and a hull with their older sisters, but not much else. The slower pace of ship construction, combined with the faster pace of technological innovation, may eventually render the “class” concept entirely obsolete.  Nevertheless, it will remain an important historical marking for organizing warships.

Robert Farley is a Senior Lecturer at the Patterson School of Diplomacy and International Commerce at the University of Kentucky.