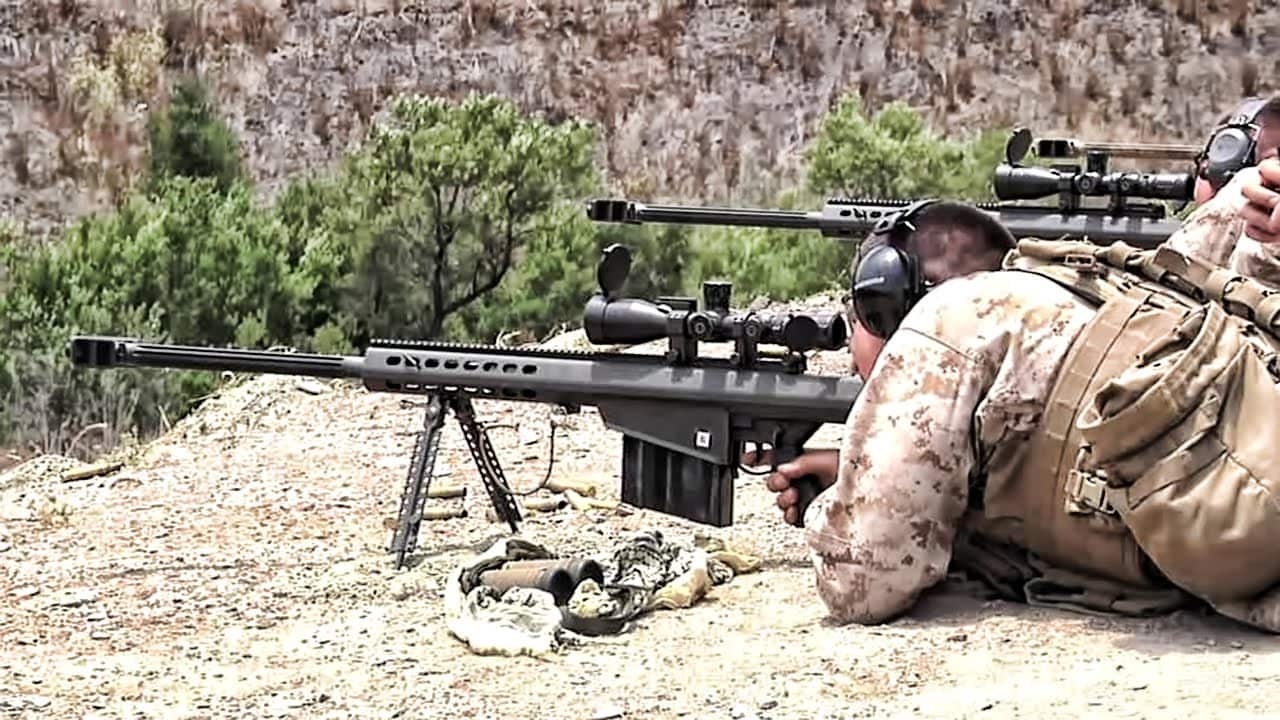 Heavy machine guns and sniper rifles in .50 caliber are some of the most feared weapons for the infantryman on the battlefield. As the .50 caliber round was originally meant to pierce armor and take down aircraft, a hit is practically guaranteed to incapacitate a soldier. Most body armor is useless against .50 caliber rounds, as they are only meant to protect against cartridges with less than 1/3 of the energy of the .50 caliber.

But some special body armor exists that protects against .50 caliber projectiles. These plates are only issued to aircrew, as their immense bulk and weight severely limit the mobility of a soldier. The plates were also usually limited to covering the front of an aircrewman, as the rear and sides were assumed to be protected by the armor plating of an aircraft. But as .50 caliber guns are commonly used in the anti-air role, protection against the caliber was deemed important enough to develop body armor to counter it.

Aircrew have a history of being some of the first to receive body armor technology due to the relatively stationary nature of their work. During WWII, U.S. Army Air Forces bomber crewmen wore ballistic nylon and steel flak jackets to protect against shrapnel from shells. Two models were produced, one with full coverage for gunners who would have to stand, and one with just frontal coverage for pilots who would have an armored seat protecting their back. This pattern of producing multiple kinds of vests for aircrew would be repeated later in history.

However, WWII flak jackets only protected against shrapnel and pistol rounds, which were relatively low velocity. They would be pierced easily by regular machine gun rounds.

This level of protection was not enough for helicopter crewmen during the Vietnam War, who began the war wearing vests of WWII and Korean War vintage. New vests were needed for helicopter crewmen, who often were faced with machine gun fire from various 7.62×39 and 7.62x54R (.30 caliber) weapons on the ground.

A development program was initiated in the 1960s, taking advantage of the new ceramic armor materials to develop .30 caliber resistant body armor for helicopter aircrew. The solution was found in a curved ceramic plate made of various composites that could withstand .30 caliber hits. Early versions rested the plate on the pilot’s legs or on the seat itself, but eventually, a fabric “vest” type carrier was made that held the plates on the pilot’s chest for optimal usability and comfort.

These early plate vests had one big issue, they didn’t have spall protection on the rear of the plate. This resulted in pilots wearing the plate carrier vest on top of an older 1950s flak vest. This was rectified in 1968 with the adoption of a plate carrier vest with a ballistic nylon backing to catch spall, a pattern of body armor that would see continued usage into the 2000s.

The end of the Vietnam War led to a stagnation in body armor technology for aircrew. While helicopter pilots in Vietnam faced .50 caliber rounds, usually fired from Soviet DshK heavy machine guns, the Army deemed it infeasible in 1971 to develop armor that could resist .50 caliber rounds due to the difficulty of dispersing the energy of the round.

But by the 1990s, technology had advanced again. As part of the SARVIP (Survival Armor Recovery Vest, Insert, and Packets) program to develop a new vest for Army aircrew, a new ceramic armor plate was developed to be held within the vest. This ceramic plate was said to provide “standoff protection against .50 caliber rounds.” However, it appears that the SARVIP system was not very popular with aviators, as photos of combat aviators in the Gulf War era rarely appear with the heavy .50 caliber insert. Later, a different pattern of .50 caliber resistant plate for aircrew was produced by Ceradyne, in a size larger than the standard SAPI Large plate, but this plate appears to have gone unused like the SARVIP.

Looking at the size and bulk of the SARVIP and Ceradyne plates, it’s clear why they weren’t popular with aviators. At over 1 inch thick and at a weight of over 10 lbs (compared to a standard infantry SAPI plate that weighs less than 7 lbs and is less than an inch thick), the Ceradyne plate would probably be very uncomfortable for a pilot to wear.