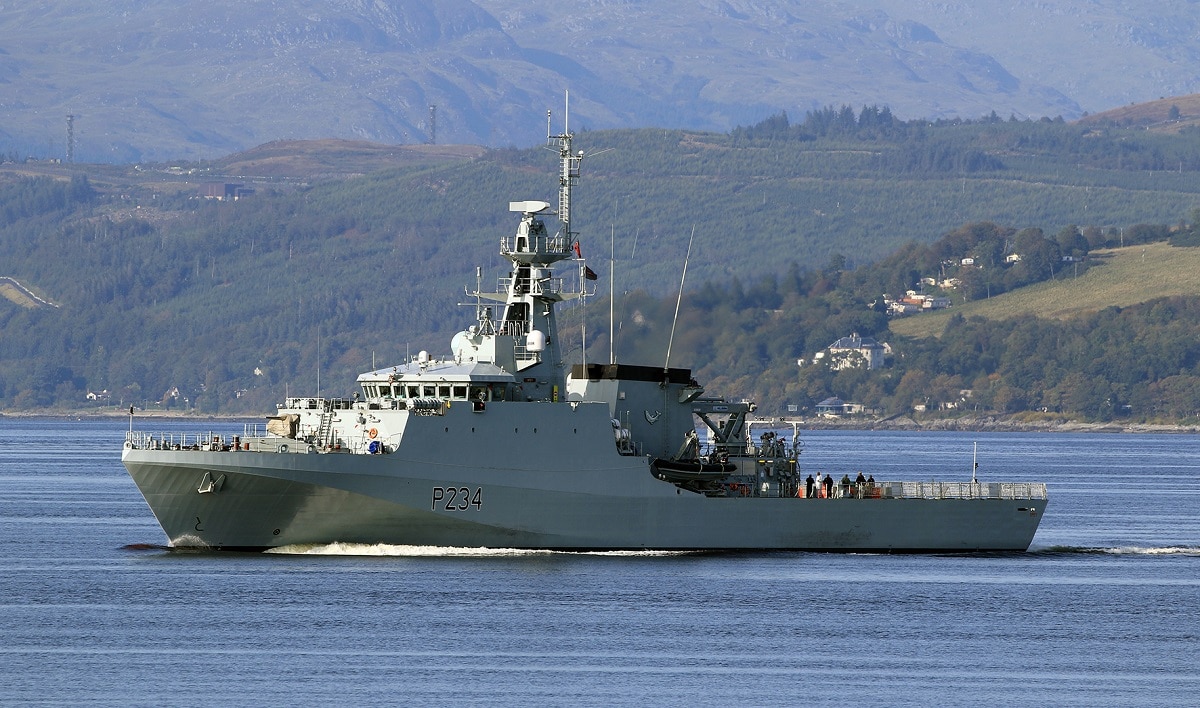 HMS Spey on maiden sea trials in the Firth of Clyde

Why only two? London merits two cheers because it has accepted that “Global Britain” must play its part in a democratic armada meant to face down aggressors who menace their neighbors while degrading freedom of the sea. At present, the Royal Navy-led multinational carrier strike group is making its inaugural grand tour of the Indo-Pacific. Carrier Strike Group 21 has been far from idle. While transiting the Mediterranean Sea it struck into Syria with naval air power manifest in F-35B stealth fighters. In June its commanders detached a British and a Dutch warship to the Black Sea, in part to challenge excessive Russian claims to jurisdiction over that body of water. This side deployment kindled Moscow’s ire in a major way.

And then the British-led task force moved on.

Centered on the supercarrier HMS Queen Elizabeth, the flotilla is now plying the Indian Ocean. In mid-July, it operated alongside the USS Ronald Reagan carrier strike group and the USS Iwo Jima amphibious ready group in the Gulf of Aden. And then it moved on again. CSG-21 is slated to conduct exercises with forces from the United States, Australia, France, Japan, New Zealand, and South Korea in the Philippine Sea next month. Come September, Queen Elizabeth and her retinue will tarry in Yokosuka, Japan, home to the U.S. Seventh Fleet and Japan Maritime Self-Defense Force escort and submarine flotillas. Better still, British spokesmen announced that the Royal Navy intends to base two vessels in Asian seas on a permanent basis. The offshore patrol vessels HMS Spey and HMS Tamar will call regional waters home.

Glad tidings all around for friends of a free and open Indo-Pacific, with all the blessings the international legal order of the sea entails.

And yet I withhold that third cheer for now. Spey and Tamar are worthy ships without a doubt. Offshore patrol vessels are light combatants optimal for nautical police duty, and an invaluable part of any composite fleet. Deployed to the East or South China Sea in concert with regional navies and coast guards, they could help friendly Asian powers face down China’s “gray-zone” efforts to purloin territory and sovereignty for itself despite a ruling from an authoritative international court that smacked down its claims with extreme prejudice five years ago. Patrol craft can do worthwhile duty.

Still, a pair of destroyers or other major combatants would have made a more incisive statement about British power and purpose in the region. Spey and Tamar should excel at low-level encounters in the gray zone, and thus should help enhance deterrence on the tactical level. They contribute little to East Asian allies’ capability to wage higher-order warfare—and thus may do little to bolster strategic deterrence vis-à-vis Xi Jinping & Co.

As readers of these pixels well know, Henry Kissinger depicts deterrence as a product of multiplication of capability, resolve, and belief. If the allies want to deter China, that is, they need to amass capability of formidable heft, display unshakable resolve to use that capability under circumstances they say they will, and convince China of their combined power and resolve. Stationing Royal Navy offshore patrol vessels in Asian waters instead of heavy warships reduces the magnitude of the capability variable compared to what it might be. And thus deterrence suffers on a whole.London’s choice of offshore patrol vessels may also reduce the belief factor. There’s a perceptual dimension to deterrence. During the gunboat-diplomacy era before 1949, when the Chinese Civil War reached its unhappy end, small ships from imperial powers had a habit of getting themselves into scrapes on Chinese internal waterways and finding it hard to extricate themselves. One was HMS Amethyst, a British escort ship entrapped and embattled on the Yangtze River for months during the civil war’s endgame. Chinese Communist Party potentates doubtless remember the Amethyst incident—and, if so, may take the coming British presence in East Asia more lightly than it deserves.

It will look like a standing deployment of less-than-battleworthy ships of war—an inconsequential barrier to China’s marine ambitions.

That’s doubly true because the brace of Royal Navy vessels will have no permanent base in Asian waters according to the British Embassy in Tokyo. Presumably they will roam from seaport to seaport. That feels like a step back from 2019, when London was evidently eyeing a permanent naval base in Singapore, or perhaps Brunei. Scuttlebutt even had it that the British and French navies might establish a standing carrier presence in the region, rotating their combined three flattops through the South China Sea as a statement of European fortitude and oceanic might. With three hulls they might have kept one in the Indo-Pacific at all times.

Now that would have broadcast a deterrent message. It would have emplaced a naval-aviation contingent of considerable moment along the southern arc of the first island chain, boosting the capability variable in Kissinger’s formula. And a naval presence anchored by a permanent naval station would have put Beijing on notice that Europeans were in the region to stay, boosting Kissinger’s willpower variable. Chinese leaders could not overlook a carrier task force based in the South China Sea the way they may overlook the rootless presence of HMS Spey and HMS Tamar. They might become believers in European and allied steadfastness.

In short, stationing an itinerant naval squadron in the Pacific may signal to China that Great Britain has come back to the region, yet reserves the option to make its exit when the going gets tough. That’s a mixed message.

So let’s save that third cheer until London proves it has skin in the game of defending allies, partners, and freedom of the sea.