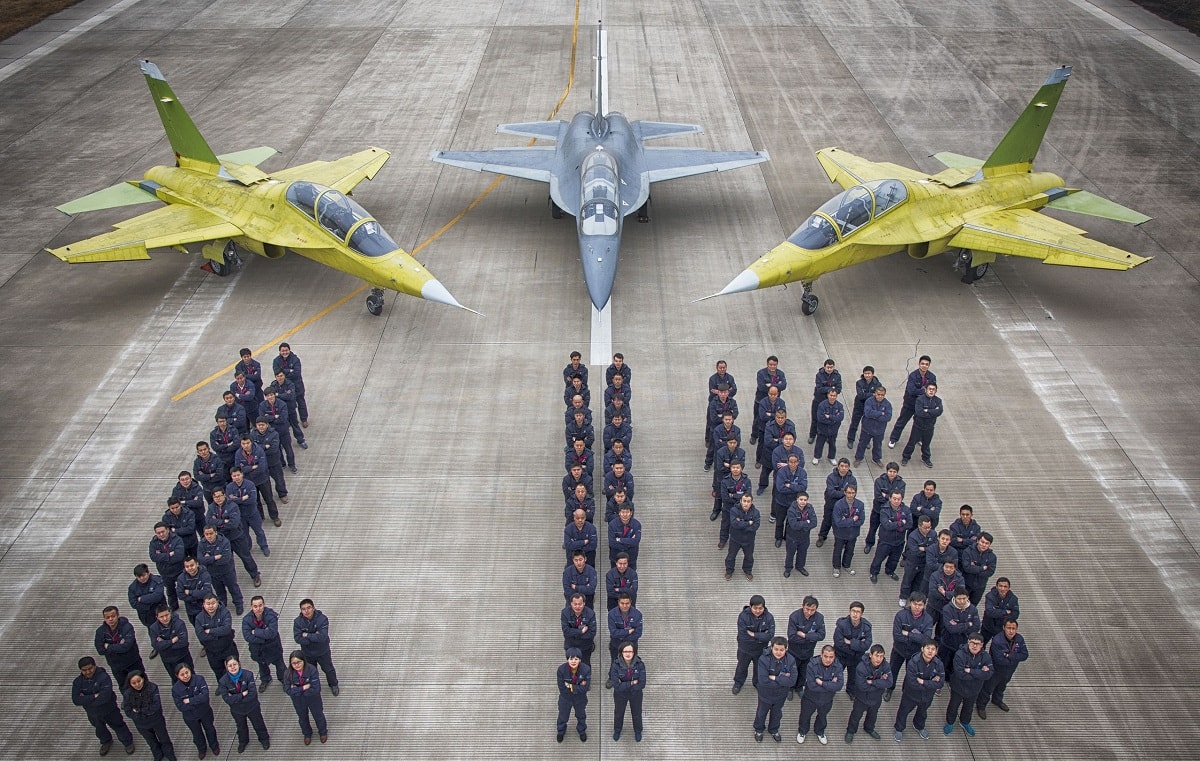 Flying a high-performance jet fighter is a physically and mentally demanding skill that requires a lot of practice—but each hour flying a warplane can cost tens of thousands of dollars in fuel and maintenance expenses. That’s why air forces employ lighter, easier-handling Lead-In Fighter Trainers (LIFTs) to give pilots a chance to accumulate real-life experience with supersonic flight, air combat maneuvers, and weapons launch before they take the stick of a possibly finicky high-performance jet fighter.

The thing is advanced jet trainers like South Korea’ T-50 Golden Eagle are quite capable of basic combat duties short of high-intensity conflict while costing half or a third as much as a brand new warplane. For example, Filipino FA-50s and Nigerian Alpha Jet trainers have played a major role in combating brutal insurgencies in 2017, though both were involved in tragic friendly fire incidents.

The U.S. Air Force is looking to purchase 350 new LIFT jets following its T-X competition and is evaluating several designs costing between $30 and $40 million per airframe. However, China has already been phasing into service its own very slick and speedy LIFT, costing the equivalent of only $10 to $15 million, which has attracted interest in Africa and Latin America.

Built by Hongdu in Nanchang, China, the L-15 Falcon resembles an adorably abbreviated Super Hornet or F-16. The Falcon’s two Ukrainian-built AL-222 turbofans afford the trainee and instructor a backup should one engine fail, while multi-function displays in the ‘glass cockpit’ and the hands-on-throttle-and-stick controls give trainees a chance to work with the kinds of instruments typical to fourth-generation fighters.

The Falcon’s leading-edge extensions on the front of its wings and a high G-load tolerance of 8.5 allow it to perform tight maneuvers and achieve high angles of attack up to 30 degrees above the vector of the plane. Quadruple-redundant fly-by-wire controls on three axes allow for precise maneuvers. These traits are used to prepare pilots for the diverse family of famously supermaneuverable twin-engine Flanker multi-role jets operated by China’s People’s Liberation Army Air Force and Navy.

The L-15 prototypes first flew in March 2006 and entered service in limited numbers in 2013 as a subsonic Advanced Jet Trainer designated the JL-10. This basic model boasts six hardpoints to carry bombs, rockets, and short-range air-to-air missiles but lacks a radar to target long-range munitions.

However, Hongdu later exhibited a supersonic L-15B model with afterburning turbofans, allowing the Falcon to attain speeds of up to Mach 1.4. The L-15B also has a lengthened nose to accommodate a Passive Electronically Scanned Array radar with a reported detection range of  -seven or seventy miles (sources differ) which can scan both air and surface targets (photo here). A Radar Warning Receiver added in the tail gives it a fighting chance to dodge missile attacks, while an IFF antenna could help avoid friendly fire incidents.

The L-15B also has its payload capacity beefed up to nearly four tons of weapons loaded on nine hardpoints: six underwing, one belly pylon and two wingtip rails. The instructor’s seat can instead be used by a Weapon Systems Officer to manage guided weapons. One photo depicts an L-15 lugging 23-millimeter cannon in a belly pod, PL-5E heat-seeking air-to-air missiles (distantly related to the AA-2 and Sidewinder), LT-2 laser-guided bombs, and LS-6 GPS-guided bombs with fold-out wings that allow it to glide to targets up to thirty-seven miles away. Reportedly, more modern PL-10 and PL-12 beyond-visual-range radar-guided missiles (range sixty-two miles) could also be carried as well as other air-to-ground munitions.

The L-15B can even lug jamming pods to serve as a cut-price electronic warfare jet. However, while the jet can theoretically fly up to 52,000 feet high and over distances of up to 1,900 miles, when fully combat-loaded its effective radius is reduced to just 350 miles.

Of course, the diminutive L-15B doesn’t boast the speed, defenses, sensors and heavy payload of a full-fledged fourth-generation multi-role fighter like the F-16 or Su-35. But for developing countries that don’t expect to fight a major military power, jets like the Falcon could perform basic air defense and precision ground-attack missions, all on a platform that will be cheaper, easier to maintain, and used for training pilots.

The Zambian Air Force so far has acquired six L-15Zs for its No. 15 squadron for $100 million, plus simulators and various guided weapons. In 2015, Venezuelan Admiral Carmen Mirandez announced plans to acquire one or two dozen L-15s to help pilots transition to Su-30MK2 and F-16 fighters. However, cash-strapped Caracas has put the deal on hold. The Uruguayan Air Force has also expressed interest in acquiring eight L-15s to replace its A-37B Dragonflies, one of which suffered an accident in 2016. Pakistan, a close ally of China, is another potential operator of the L-15B, but the jet would conflict with plans to acquire two-seat JF-17B jets, which are a Pakistani-Chinese collaboration.

The L-15 also has a rival supersonic domestic jet trainer, the Guizhou JL-9. A heavily modified two-seat derivative of the legendary MiG-21 with cranked delta wings, the turbojet-powered JL-9 is less sophisticated and has only five weapons hardpoints, but is cheaper at $8.5 million each—and the basic model comes with afterburners, an Italian pulse-doppler radar and a built-in 23-millimeter cannon. JL-9s and carrier-landing capable JL-9Hs serve with the People’s Liberation Army and PLA Naval Air Force (PLANAF), and six export models called the FTC-2000 Shanying (“Mountain Eagle”) were delivered to Sudan in May 2018. Sudan is infamous for using its warplanes to bombard villages in rebel-held territory, and Russia and China are amongst of the few major arms exporters from which Khartoum can obtain modern weapons.

Meanwhile, China operates between 130 and 150 L-15s in nine squadrons, presumably mostly the subsonic L-15A. In general, Chinese fighter pilots fly a decent number of hours annually but lack adequate training under realistic combat conditions; presumably, weapons-capable and radar-equipped jet trainers could help address that deficiency. Intriguingly, an L-15 was photographed in 2018 with PLANAF markings (it has been dubbed the JL-10H) suggesting a possible JL-10 variant for training carrier-based pilots. However, some in the Chinese media have expressed doubt that the Falcon’s rear fuselage is strong enough to mount a tail hook to practice carrier landings.

The market for trainer/light attack planes is relatively crowded with competitors such as the Russian Yak-130, Italian MB.346, China’s subsonic K-8, T-50 Golden Eagle or possibly Boeing’s T-X. It is too early to tell whether L-15 and JL-9 will prove a major export success—but sales of cut-price supersonic trainer/fighters could become an interesting signifier of Beijing’s expanding influence in Africa, Asia and Latin America in years to come.