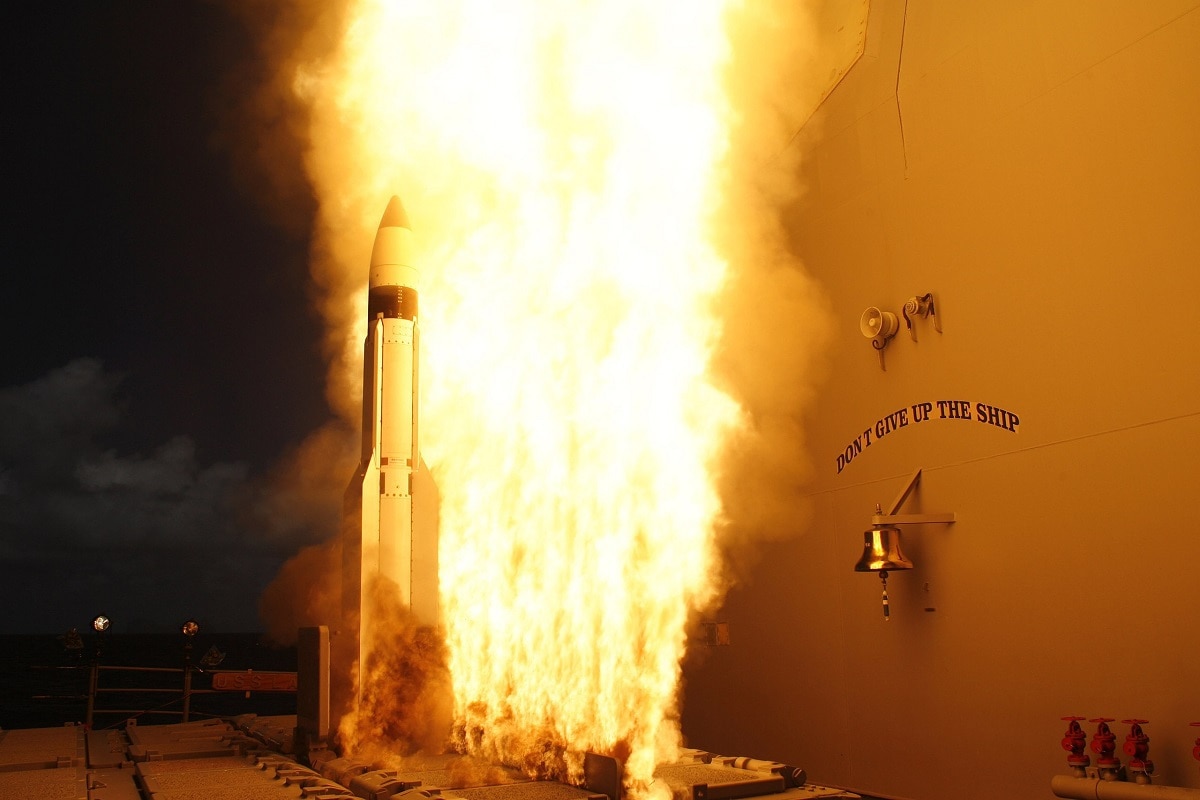 A fairly recent story out of the U.S. Marine Corps, whose leadership has set in motion a crash effort to field anti-ship missiles for island warfare. Grabbing headlines most recently is the high-mobility artillery rocket system, or HIMARS. In effect, HIMARS is a truck that totes around a launcher capable of disgorging a variety of precision-guided munitions. Some can pummel ships at sea.

And devil dogs will grin. As will their U.S. Navy shipmates. America’s navy can use all the joint-service help it can get as it squares off against China and Russia in their home waters. The Marine Corps Hymn proclaims that marines are “first to fight,” and that remains true in this age of Eurasian seacoasts abristle with long-range precision-guided armaments and missile-armed ships and planes prowling sea and sky. But that fight will commence at sea, not on distant beaches. Marines realize they may never reach Pacific battlegrounds without first winning command of waters that furnish an avenue into contested littorals.

Then Marine Commandant Robert Neller is fond of telling his comrades they must “fight to get to the fight.” His logic is remorseless. And marines will take up arms in company with navy and merchant-marine sailors who man the fleet. Expeditionary forces can’t even begin prying open the halls of Montezuma or the shores of Tripoli until they defeat hostile navies and batter down “anti-access” defenses. But it goes further. In all likelihood, the fight will involve more than just the naval services. U.S. Air Force aviators may bear a hand in future high-sea imbroglios. Even the U.S. Army stands poised to get into the action as soldiers prepare for “multi-domain operations” spanning the terrestrial, air—and, yes, saltwater—domains.

In other words, future fights promise to be joint fights that mesh capabilities from naval and non-naval services. In that sense, the future promises to be a throwback to Pacific campaigns of old. It’s fitting, then, that marine magnates are peering both ahead and back in time as they orient the Corps toward today’s challenges. They want to harness newfangled technology to help win the war at sea while returning the service to its maritime heritage after seventeen years of battling insurgents and terrorists on dry land. In so doing they intend to bolster the efficacy of American maritime strategy.

First, technology. Nowadays sea power is no longer purely a matter for fleets. To the extent it ever was: that a ship’s a fool to fight a fort is an old adage, not one of recent coinage. Nor is sea power an exclusive province of navies. It is a joint enterprise whereby seagoing, aviation, and ground forces concentrate firepower at embattled scenes on the briny main to impose their will on the foe. The logic is plain. More and more shore-based weaponry can strike farther and farther out to sea as sensor technology and precision guidance mature. Fleets are beneficiaries of fire support from that weaponry so long as they cruise within its range.

Or as General Neller puts it, “There’s a ground component to the maritime fight.” Marines constitute “a naval force in a naval campaign; you have to help the ships control sea space. And you can do that from the land.”

And you can do it best from the land you already occupy. Emplaced on islands dotting the Pacific Ocean, HIMARS and kindred missile launchers could give Chinese ships of war a very bad day. If positioned along the “first island chain” paralleling the mainland’s coastline before the outbreak of war, marines and their joint-service and allied brethren could plausibly threaten to bar access to the Western Pacific and points beyond. And they could execute the threat in wartime, confining Chinese merchantmen, warships, and aircraft to the China seas to exact a frightful economic and military penalty should Beijing do things the United States and its allies hope to deter.

The Marine Corps’ missile procurement blitz will be instantly familiar to China’s People’s Liberation Army (PLA). In fact, the marines are mounting a version in miniature of the PLA’s “anti-access/area-denial,” or A2/AD, strategy. China’s armed forces want to keep the U.S. Pacific Fleet and affiliated joint forces out of the Western Pacific or take a heavy toll should they try to break in. Advanced technology likewise super-empowers U.S. and allied forces. They could strew anti-ship and anti-air missiles on landmasses comprising the first island chain while deploying additional munitions aboard aircraft, submarines, and surface craft lurking nearby.

Land forces—marines and soldiers, American and allied—can anchor the ground component of U.S. maritime strategy in Asia. Like A2/AD, island-chain defense leverages the symbiosis between sea- and shore-based implements of sea power. Joint firepower will help expeditionary forces fight their way to the fight. Or, in the case of the first island chain, likely battlefields already belong to allies or friends. Island warriors only need to hold friendly soil—and as military sages from Clausewitz to Moltke the Elder teach, tactical defense represents the strongest form of warfare.

If imitation is the sincerest form of flattery, Beijing ought to feel flattered indeed. And dismayed!

Second, culture. Sophisticated implements like HIMARS accomplish little unless used with skill and verve. The naval services are trying to rejuvenate martial cultures deadened by three ahistorical decades. Once upon a time—in fact, throughout their history until recent times—the U.S. Marine Corps and Navy assumed they had to fight for command of the sea before they could harvest the fruits of command. In other words, they assumed they had to wrest control of important waters from local defenders in order to render seaways safe enough to land troops, bombard coastal sites, or, in the air and missile age, loft firepower deep into the interior. They had to make the sea a protected sanctuary.

In other words, they assumed they had to do what naval services have done throughout history. Yet service chieftains instigated a cultural revolution in 1992, declaring in effect that the sea services were now exempt from the rigors of peer-on-peer combat. That year they issued a strategic directive titled “. . . From the Sea” proclaiming that, with the Soviet Union dead and the Soviet Navy rusting at its moorings, the U.S. Navy and Marine Corps could afford to reinvent themselves as “fundamentally different” sea services. With no peer antagonist to duel and none on the horizon, they were at liberty to assume away their most elemental function.

Not only could the sea services drop their guard; the leadership ordered them to. And they complied. Tactics and weaponry for prosecuting major combat languished in the wake of “. . . From the Sea.” The services first lost their fighting edge during the strategic holiday of the 1990s, and then while waging irregular warfare in the years since 9/11. Small wonder the services find themselves struggling to refresh their cultures for the new, old age of great-power strategic competition that’s upon us.

Few in uniform today remember the Cold War, when the prospect of battle was a daily fact of life. Preparing for strategic competition demands more than upgrading equipment or relearning skills grown stale. It demands that officialdom and senior commanders imprint bloody-minded attitudes on the sea services anew. Only thus will they extract maximum combat power out of new weapons and sensors, assuring hardware fulfills its potential.

And third, strategy. If highfalutin’ technology and the cultural counterrevolution pan out, the U.S. Marines and fellow services will have positioned themselves to execute a strategy that could give rival great powers fits. Look back again to look ahead. During the late Cold War, the founding chief of the U.S. Office of Net Assessment, Andrew Marshall, exhorted the Pentagon and the armed forces to fashion “competitive strategies” whereby they could compete at a low cost relative to American economic means while compelling the Soviets to compete at a prohibitive cost relative to their means. Over time the approach would render waging cold war unaffordable for Moscow.

Competitive strategy is a mode of competition worth rediscovering. The United States and its allies are developing hardware and methods for closing the straits puncturing the first island chain to Chinese vessels and aircraft. In so doing they can deny China the access it must have to transact commerce, diplomacy, and military affairs in faraway regions. And they can close these narrow seas with systems such as HIMARS. While HIMARS anti-ship rounds are not cheap in absolute terms, dislodging rocketeers from Pacific islands would prove far more burdensome for the PLA. An allied strategy can compel Chinese forces to fight to get to the fight—flipping the logic of anti-access and area denial against them.

In short, island-chain defense is strategy on the cheap in relative terms. It’s an approach that would conjure a glint in Andrew Marshall’s eye.

Let’s call it a “Great Wall in reverse” strategy, with islands comprising the guard towers and joint sea power stationed on and around the islands forming the masonry in between. The legendary Great Wall was built to keep out Central Asian nomads who ravaged China from the steppes. Properly fortified, an archipelagic Great Wall can barricade China within the China seas—and thereby force the PLA to compete on allied terms at a fearsome cost to itself.

HIMARS, then, may look like a humble truck. In reality, it is far more: a tactical implement commanding significant strategic import. As the Marine Corps girds to fight in the air, on land, and sea, it ought to procure anti-ship weapons in bulk—and in haste.