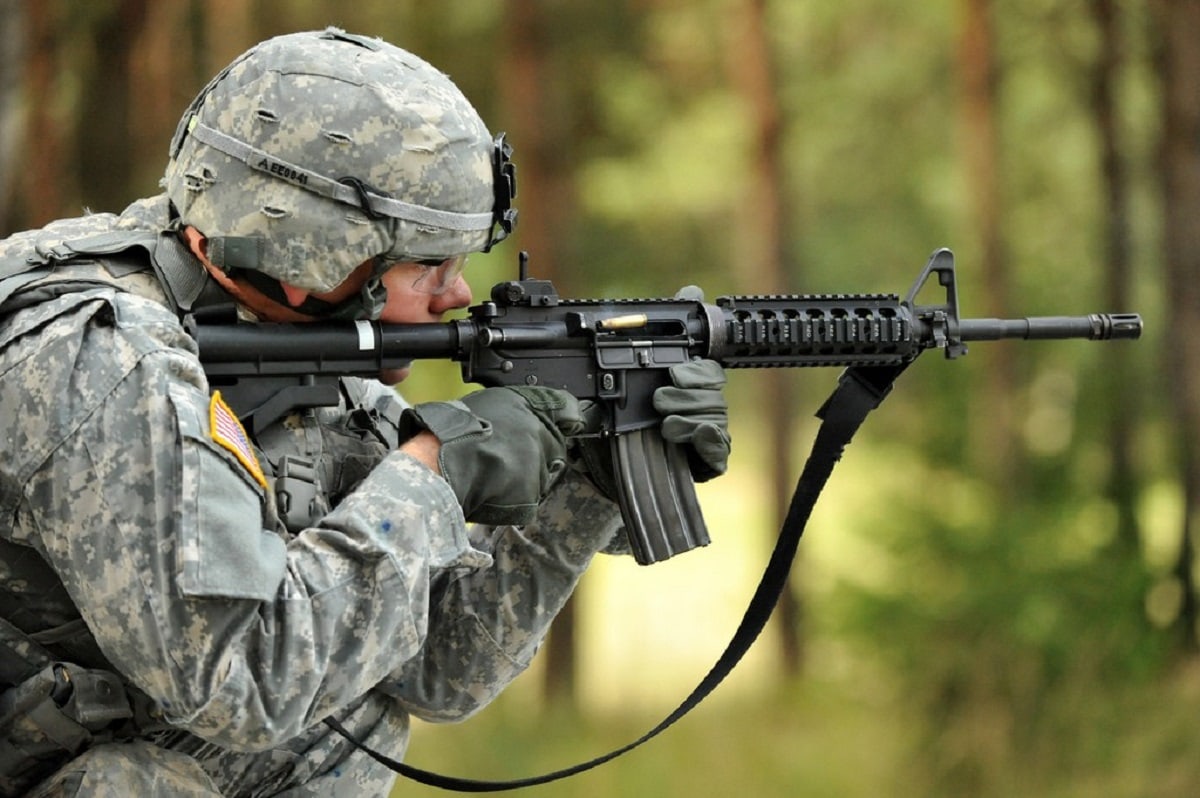 Colt’s Individual Carbine (IC) was one of Colt’s last attempts to produce a successor to the M4. Designed for the Army’s “Individual Carbine” program, the Colt submission featured a myriad of upgrades and mechanical changes versus a standard M4. But the Army’s IC program failed to select a winner. Surprisingly, Colt didn’t continue to market their new carbine either on the civilian or military market. But what was the Colt IC, and how does it improve on the M4?

Chris Bartocci, a former Colt engineer, has written a piece on the Colt IC for his blog, Small Arms Solutions. In it, he goes over the ways the Colt IC improved on previous designs.

The first thing about the Colt IC that catches the eye is the distinctive camouflage pattern. As the Army IC competition required all rifles to be in flat dark earth, Colt took the opportunity to trial a new method of anodizing the guns. Supposedly, the camouflage anodization is far stronger than most coatings or paint methods, so

Like many competing designs, the Colt IC changed the receiver of the M4 to be fully ambidextrous. Every manufacturer has their specific way to do this, and Colt’s is rather interesting as it’s not symmetrical. The Colt IC uses a lever that pulls the mag catch outwards on the left side of the rifle. The  mag catch button is thus placed on the forwards bottom of the trigger guard. The positioning of the ambidextrous bolt catch is more conventional, it’s a button above the mag catch on the right of the rifle. The safety is also ambidextrous, but the lever on the right side of the rifle is shorter so as not to interfere with the trigger finger when the rifle is on fire.

But the more interesting aspects of the Colt IC are internal. The upper receiver is fairly unique, combining the monolithic rail with an external short stroke piston. A variety of tweaks are introduced into the upper to make the piston run smoothly. The bolt carrier resembles the Taiwanese T91 bolt, featuring a simple protrusion where the gas key normally is. The buffer weight is changed to an H3 buffer to smooth out the recoil and reduce bolt bounce.

So why did Colt not market the Colt IC further? It truly is unclear. Mr. Bartocci states in one of his videos that Israel was interested in the Colt IC, but Colt was not willing to produce it for them. Colt does also produce a similar rifle in the Colt Advanced Piston Carbine (APC), but the APC lacks the truly ambidextrous receiver the Colt IC has. It’s possible that the different lower for the Colt IC was too expensive to produce while Colt already had a similar product in the Colt Modular series of rifles. The Colt Modular rifle separates the magwell and fire control group into two different parts to allow for swapping of calibers. But given the failure of Colt Modular rifles to sell, perhaps the simpler Colt IC would have been a better choice for Colt.