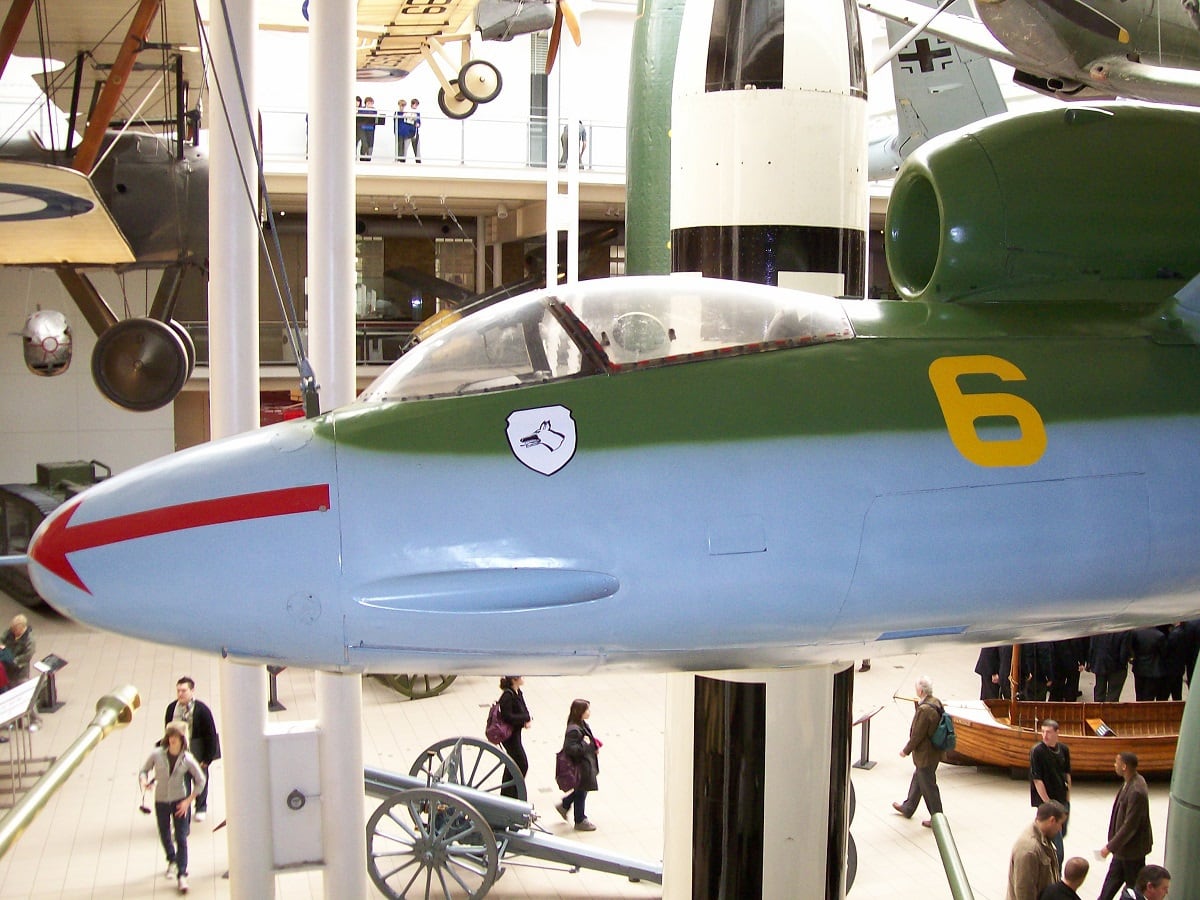 By the summer of 1944, the German Luftwaffe had a lot of problems. Huge Allied four-engine strategic bombers were pummeling Germany’s industrial base daily, escorted by long-range fighters that were frittering away the German flying arm’s elite cadres of combat pilots nurtured since the 1930s. While the bombing campaign failed to prevent German industrial output from increasing in 1944, due to increased mobilization and use of slave labor, attacks targeting petroleum production proved extremely effective. By the end of the year, the advanced new tanks and warplanes coming out of German factories were often grounded for lack of fuel. Such was the Luftwaffe’s decline that Allied fighter bombers were frequently able to roam over the frontlines unopposed as they wreaked havoc on German frontline troops.

The Nazi leadership had hoped that Messerschmitt Me 262 Sturmvogel (“Storm Bird”) jet fighter—the first fighter jet to see combat in the summer of 1944—would swing the air war back in their favor. But despite the Sturmvogel’s hundred-mile-per-hour speed advantage and powerful armament, the twin-engine jets were expensive to produce and consumed tons of fuel. Furthermore, pilots required extensive training to master the advanced jets—but the Luftwaffe’s situation had grown so desperate that trainees were being thrown into combat after minimal instruction, with predictable results.

These crushing realities led Luftwaffe chief Hermann Göring and industrial minister Albert Speer to conceive of an Emergency Fighter Program to produce a cut-price advanced fighter that would not tax the Nazi Germany’s increasingly limited industrial and human resources. The new fighter had to be simple enough that it could be piloted by Hitler Youth who were ostensibly eager to sacrifice their lives for the Third Reich. If the aircraft proved too difficult maintain with spare parts, the planes would be expendable enough to simply abandon. Needless to say, this project was adopted over the objections of the Luftwaffe’s old-school fighter pilots.

Many of the proposals submitted to the program reeked of desperation, such as using towed gliders to attack bomber formations. Others exhibited a wanton disregard for the pilot’s life, including several expendable manned rockets launched from vertical rails like a missile. There were also bizarre “miniature fighters” deployed from bombers, in which the pilot had to lay on his belly.

However, in October 1944, the Heinkel He 162 was selected for production. Though Heinkel was most famous in World War II for its He 111 bombers, the firm had in fact built the first operational jet plane ever, the He 178, as well as an unsuccessful competitor to the Me 262, the He 280. In just a month in a half, it managed to produce a prototype—slated to begin production just one month later!

The bubble-canopied He 162 was actually an appealing-looking plane, built low to the ground like a racer, with both its stubby wings and twin-finned horizontal tail planes canted upward. Unconventionally, a single BMW-003E axial-flow turbojet motor was mounted on top of the fuselage, level with the wings. It was the first operational jet fighter to feature an ejection seat, using an explosive cartridge under the pilot’s chair to blast him out of the cockpit, as well as the the only single-engine Axis plane that had tricycle landing gear (a third wheel under the nose).

However, to cut manufacturing costs, the so-called Volksjäger —“People’s Fighter”—used primarily wooden components, designed to be simple enough to assemble using unskilled and slave labor. However, the cheap acidic glue holding the components together tended to eat through the plywood components. During the prototype He 162A-0’s second test flight in December, this flaw caused the ailerons to fly off, leading to a fatal crash. More generally, the Volksjäger proved to be unstable, but Heinkel was under such a tight timetable to begin mass production that only minor modifications could be made to correct significant flaws.

One innovative attempt to cure the Volksjäger’s instability was to introduce “drooped” wingtips—a technique now widely employed in gliders and light planes. It was also discovered that the A-1 production model’s light airframe vibrated excessively when firing its twin bomber-destroying thirty-millimeter cannons, so a new A-2 variant using twenty-millimeter MG 151 cannons with a deeper ammunition supply was rushed into production. In a marvel of speed—if not quality control—the Heinkel factory worked its slave laborers to the bone and began spitting out He 162s in January 1945.

Nicknamed the “Salamander,” the wooden He 162 was so light, at only four thousand pounds empty (the 262, which had more powerful engines, weighed twice as much empty), that it actually proved to be the fastest operational jet fighter in World War II, with a maximum speed of 562 miles per hour at high altitude.

The fastest fighter, period, in the conflict was the rocket-powered Me 163 Komet, which could attain 596 miles per hour—but it only had fuel for seven minutes of flight time, and was known for spontaneously exploding. The Salamander was better, with a range of 370 miles, but that still only amounted to thirty minutes’ endurance. The “People’s Jet” was also highly unstable; needful of rare, long runways for takeoff; not very maneuverable; and difficult to land—basically the opposite of an airplane you’d want to hand over to inexperienced trainees who have only practiced flying a glider.

In March, a Hitler Youth unit was established in Sagan, Germany to begin training, awaiting the arrival of unpowered He 162S training gliders—but only two were ever produced. The Third Reich was simply crumbling so rapidly that Göring’s dream of dispatching indoctrinated teenagers to die in glorious battle in cheap jet fighters was never realized.

Instead, in February the veteran fighter group Jagdgeschwader I began training with the jets at Parchim air base, a process significantly delayed by a persistent lack of fuel. Further delays were caused when over one hundred B-17 bombers plastered the airbase on April 7. The single-engine jets eventually relocated to Leck in Schleswig-Holstein, where they finally began flying combat patrols. Several encounters with Allied fighters were inconclusive.

However, at noon on April 19, Flight Officer Geoffrey Walkington encountered an aircraft over Husum “that appeared to have twin fins and rudders and one engine”—the aircraft of Feldwebel Gunther Kirchner, who had earlier that day claimed an unconfirmed kill. The engagement between Walkington and Kirchner is described in Tempest Squadrons of the RAF:

“[Walkington] broke of his strafing run and gave chase. At 360 mph he was unable to close on the aircraft, now some 1500 yards ahead, until it made a turn. By turning inside his quarry Walkington cut the range to some 1000 yards. Carefully trimming his Tempest, he fired a series of short bursts and the enemy aircraft pulled up into clouds. As Walkington followed, he passed his target spinning back down, the aircraft exploding when it hit the ground near Husum airfield.”

According to a German witness, Kirchner was thrown into a spin attempting a 180-degree turn the Salamander’s finicky airframe simply could not handle. The Feldwebel ejected, but due to his tumbling plane being inverted, he was flung straight into the ground before his parachute could open.

On May 4, Salamander pilot Rudolf Schmitt claimed to have shot down a British Tempest fighter on a ground-attack run. Though the Germans awarded the kill to a flak unit, the captured Flight Officer Austin insisted he had been shot down by Schmitt.

Over three weeks, JG.1 lost a total of thirteen Salamanders and nine pilots, including the commander of II/JG.1—mostly due to accidents resulting from the airplane’s instability, or from attempting to land after exhausting all fuel. The day after Schmitt claimed his kill, Leck airfield was overrun by British forces, bringing an end to the type’s unhappy operational career.

Heinkel managed to produce around 320 of the cut-price jets before all the factories were captured by Allied forces, though records show only 116 were delivered. Two A-8 prototypes with more powerful engines capable of attaining 596 miles per hour were built, and a single E model with an integrated rocket fuel booster was flown. Work also began on 162C and -D variants with wings swept far backward or forward respectively. After the war, surviving airframes were tested and dissected by Allied aeronautical engineers—though unfortunately a British test pilot died flying one, due to a snapping tail fin.

Despite its shortcomings, the He 162 was an elegant little design that, given a more measured manufacturing process, sturdier components and unharried pilot training, might have exhibited better performance. However, the Volksjäger’s flaws were inextricably tied to the fact it was one of the last gasps of a murderous regime ready to throw away the lives of unwilling slaves and patriotic youth alike in a desperate effort to escape a doom of its own making.