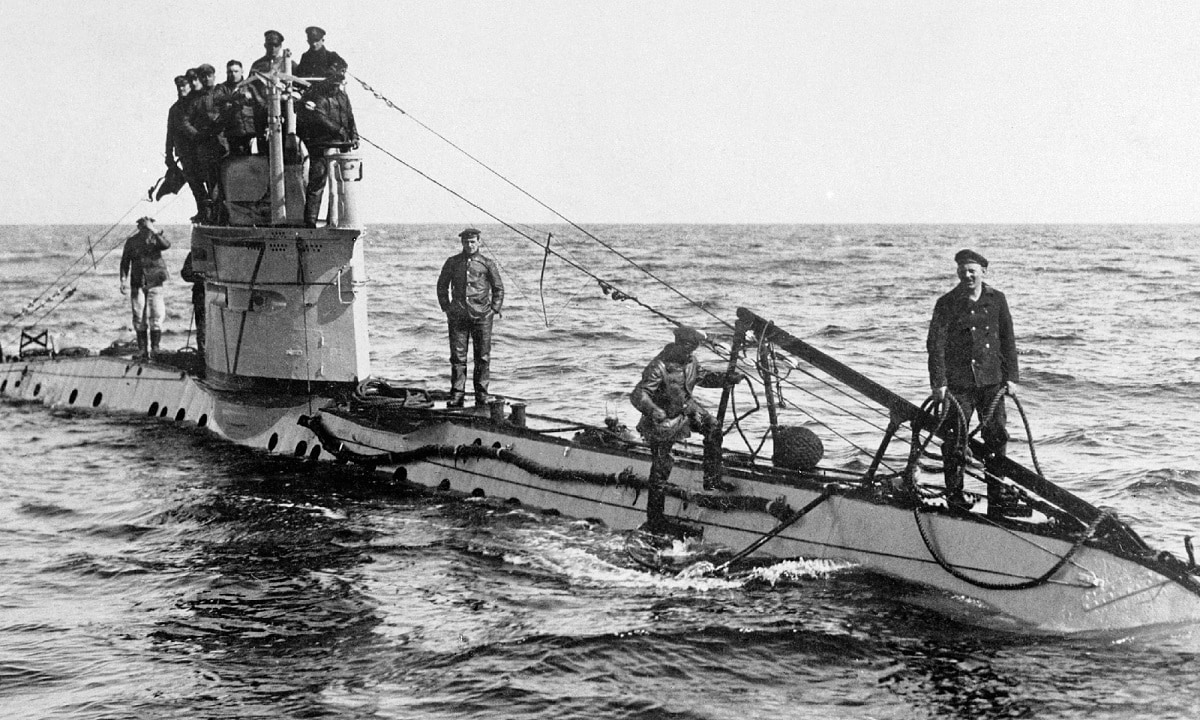 Few outcomes are fated in war. Oftentimes the losing side loses not because it’s physically outclassed or is short on skill and élan but because it errs more frequently and more grievously than the victor. It is conceivable, for instance, that Imperial Germany may have won the Battle of the Atlantic—the U-boats’ effort to sever sea routes connecting beleaguered Great Britain with North America—had it done certain basic homework. Knowing the saltwater environment, exploiting the revolution in naval technology, and exercising self-restraint may have let Germany prevail on the high seas.

Alas for the Reich, insight into marine combat was foggy in Berlin. It would have been hard for Kaiser Wilhelm II, his state secretary of the navy, Admiral Alfred von Tirpitz, and his other lieutenants to take some of these steps. Germany had a continental strategic culture. An all-pervasive cult of the battleship gripped Germans. Quirks of individual intellect and character applied blinkers to leaders’ thinking about the sea. That’s a lot to overcome.

Nor are such constraints on imagination anything new. All statesmen and commanders worth their salt strive to transcend the limits on human foresight. Think about the fable of the Scorpion and the Frog. A scorpion implores a frog to carry him across a river. He promises not to harm his benefactor—after all, they’ll both drown if he does—only to sting the frog to death in midstream. As the two creatures sink, the scorpion explains that he had to sting him. It’s in his nature.

There’s wisdom in fables. Cataloging the ways Germany could have triumphed in the Atlantic is a venture in guesswork. It’s a matter of postulating what the Kaiser, Tirpitz & Co. may have accomplished if they weren’t who they were—if they weren’t scorpions. Nevertheless, this is a venture worth undertaking, if only to remind us how prized a commodity imagination—and the resolve to act on it—remains in enterprises like diplomacy and warfare.

No single masterstroke would have changed the outcome of the undersea battle, which was a series of unconnected tactical actions more than a battle per se. Consequently, what follows resembles a five-step plan—five interconnected things Berlin could have done to bolster its maritime prospects—more than a list of discrete actions that would have let the U-boats rule the waves. With those caveats, my list of Five Ways Germany Could Have Won the First Battle of the Atlantic and likely the war:

Carl von Clausewitz—a land-bound strategist for whom water barely seemed to exist—vouchsafed that the first, the most sweeping, and the hardest act of statecraft is to fathom the nature of the endeavor on which you’re embarking. Right. On the briny main as on land, a combatant’s intellectual fundamentals must be sound to prevail. Germans failed woefully at this basic task.

Don’t believe me? Then take it from Vice Admiral Wolfgang Wegener, an officer in the German High Seas Fleet. After the war, Wegener endeared himself to no one in the navy old guard by starting The Naval Strategy of the World War—his effort to explain what went wrong during World War I—with the words, “We never understood the sea. Not one of us.”

What did Wegener—dubbed a “hairsplitter and a professor” by one erstwhile shipmate—mean by this? For one thing, he suggested that his homeland, a continental state ringed by powerful competitors, simply lacked the habit of thinking about maritime strategy. The Hanseatic League once deployed a great merchant fleet, but as far as a German battle fleet…fuggedaboutit. The Spanish, Portuguese, Dutch, and English dominated the oceans.

And they did so for centuries while Germany remained a patchwork of small states. German unification came only in 1871, while the German naval buildup commenced only around the turn of the century. It may have been too much to expect a youthful seafaring state to compete on equal terms with a neighbor whose custom was—as King Charles II put it —to command at sea.

For another, Wegener posited three benchmarks a nation must clear to qualify as a great sea power, namely geographic position, a strategic factor; the fleet, a tactical factor; and the Nietzschean-sounding “strategic will” to the sea, a strategic culture that spurred on a nation’s seaward quest. Wegener used the remainder of his treatise to show how Germany fell short of each.

For instance, Wegener beseeched his countrymen to accept their geographic plight vis-á-vis their major competitor, Great Britain. The British Isles lay athwart German access to the Atlantic Ocean, complicating access to the sea-lanes. Britain’s Royal Navy could simply cordon it off to surface fleets while hampering subsurface egress. Facts of geography left Germany in command of waters that meant little. Dominating the North Sea, observed Wegener, was like controlling the Caspian Sea—an inland sea. Why bother?

The German Navy could, perhaps, control the Baltic Sea, one of Germany’s major sources of war-making materiel and the nautical gateway to the Russian capital of St. Petersburg. Some historians argue that would have been a better focus of effort for the High Seas Fleet. It’s hard to gainsay such claims considering the fleet’s lackluster performance in the Great War.

But to wage a Battle of the Atlantic, cutting the sea-lanes linking Europe with North America, the navy needed to outflank the British Isles to the south or north. That meant seizing ports in France, Norway, or preferably both. Direct access to Atlantic hunting grounds would have let the submarine fleet and surface raiders disperse along critical British sea routes in large numbers without making long, distended voyages or eluding Royal Navy anti-submarine units. More, fresher boats on station makes for a more lethal fighting force—and better prospects for victory.

German mariners did learn. It’s no accident that Germany wrested seaports from France and Norway in 1940—abetting its anti-access strategy vis-á-vis the British Empire and subsequently the United States. German strategy for World War II offered silent testament to Wolfgang Wegener’s reasoning. Germany had to bolster its strategic position in Europe to win in the Atlantic.

To win a Battle of the Atlantic, officialdom should have configured the fleet for asymmetric combat. What if Berlin had turned German naval architects and shipwrights loose mass-producing submarines and torpedo craft instead of sluicing vast resources into battleship and battlecruiser construction, in a bid to win a fleet engagement Germany had no reason to fight? Had it done so, the navy would have boasted far more boats to assail British merchantmen crisscrossing the Atlantic. And they would have been more sophisticated boats in all likelihood. German engineering ingenuity would have hastened the technological revolution that threatened to nullify the battleship’s supremacy. What’s not to like for a submariner?

Manage the Balance of Strategic Resolve:

Better yet, foregoing a battleship race would have complicated Britain’s decision for war in 1914. Winston Churchill opined that every rivet hammered into a German dreadnought helped unify British society for strategic competition against the Reich. It’s doubtful submarine construction would have galvanized sentiment the same way. Battleships commanded the affections of seamen, political elites, and ordinary folk alike. Subs were small, unglamorous, and largely untried in high-seas action. Alfred Thayer Mahan’s many followers had a zest for battleships. There was no Mahan of subsurface warfare, no publicist for this emerging technology. They appeared less fearsome, and thus less provocative. In short, submarines were less apt to fuel strategic competition. Germany could have exploited this blind spot.

It would go too far to claim that building an asymmetric navy would have kept Britain out of the war altogether. Intervention was probably inevitable once German forces overran Belgium, opposite Britain’s Channel coast. The military offensive crossed a red-line. Still, refusing to fire Britons’ competitive instincts—Wegener claimed these empire-builders had seawater coursing through their veins—may have left London waffling at the outbreak of war. An ambivalent foe is an indifferent competitor and an easier foe to cow. An asymmetric fleet, then, would have equipped the German Navy better for the Battle of the Atlantic while drawing some of the venom out of Anglo-German enmity. Advantage: Berlin.

Similarly, Berlin could have withheld a pretext for the United States to enter the war or wage it so furiously—namely, unrestricted submarine warfare. President Woodrow Wilson ran for reelection in 1916 on keeping America out of the Great War. Wilson’s campaign slogan appeared sincere. Yet German leaders’ decision to resume unrestricted operations in 1917 helped transform attitudes among Americans and their president almost overnight. This was an operational decision that reverberated up to high politics, to Germany’s sorrow.

By exercising self-restraint in undersea combat, German leaders could have conserved their enemies — and simplified U-boat commanders’ challenge. At a minimum Wilson would have found rallying the populace harder absent such a flagrant casus belli. Not adopting certain methods of naval warfare, then, could have helped Berlin stymie the expanded enemy alliance—and the massive fleet it would deploy—before it formed.

James Holmes holds the J. C. Wylie Chair of Maritime Strategy at the Naval War College and served on the faculty of the University of Georgia School of Public and International Affairs. A former U.S. Navy surface-warfare officer, he was the last gunnery officer in history to fire a battleship’s big guns in anger, during the first Gulf War in 1991.