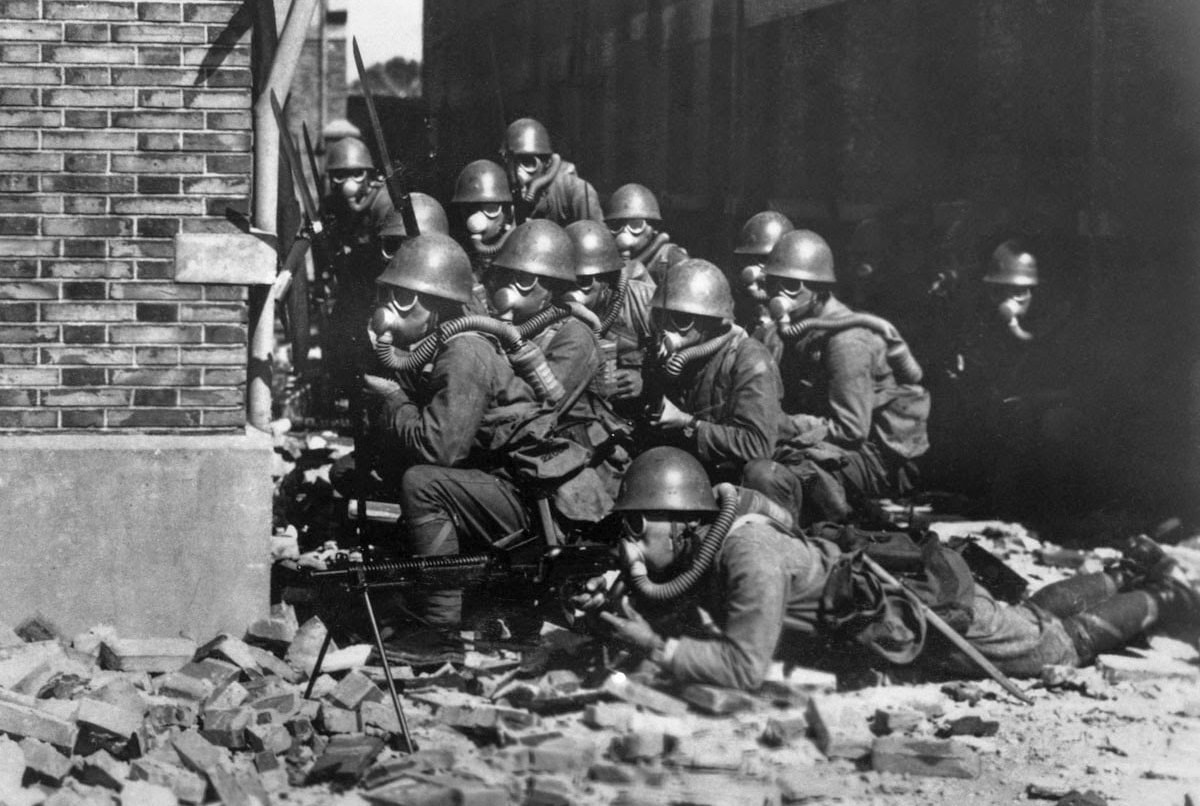 The Japanese bioweapons program was the brainchild of Gen. Shirō Ishii, who in the 1930s received backing at the highest levels to form a biological warfare unit known as Unit 731, deceptively designated the “Epidemic Prevention and Water Purification Department” of the Kwantung Army deployed to China. Unit 731 established a massive 150-building complex in the Pingfang District of Harbin (then part of the puppet state of Manchuria), where it developed and tested its weapons on involuntary human subjects, around two-thirds of whom were Chinese, with most of the rest coming from the Soviet Union. Their subjects would later include a small number of Allied POWs, Koreans and Pacific islanders.

One cannot overstate the monstrousness of Unit 731’s testing program. Human beings were vivisected while still alive without anesthetic, or had major organs removed to see how long they would survive, then had their remains pickled in jars. Subjects had their limbs frozen until afflicted with frostbite, then had those limbs beaten with sticks or amputated. Others afflicted with syphilis, including children, were forced to have sex at gunpoint with other prisoners, and the progression of the disease was then observed. Live human beings were used in weapons tests of grenades, poison gas, flamethrowers and bombs—including air-dropped biological bombs carrying anthrax or fluid-form bacteria.

However, the chief weapon favored by Japanese biowarfare specialists appears to have been the plague, the bacterial infection which wiped out much of Europe’s population in the fourteenth century during the Black Death. A few days after infection, a plague-afflicted person may begin exhibiting symptoms, including grotesque buboes, high fever, gangrene in the extremities and chills or seizures, with a death rate of around 50 percent for untreated individuals.

Unit 731 was capable of producing around sixty pounds of plague agent in a few days, and the method of transmission mimicked that found in nature: plague-infested fleas. The fleas were stored in ceramic Uji-50 bombs with celluloid fins and dropped out of airplanes onto civilian communities. The released fleas went on to infest local rats, which in turn would contaminate food stores, spreading the plague to human beings.

This delivery mechanism was employed by Japanese bombers over the cities of Ningbo and Changde in China, and on some occasions proved “successful” in starting a plague, although whether casualties number in the hundreds or tens of thousands remains disputed. Following the Doolittle raid over Tokyo in 1942, Japanese troops launched a revenge campaign called Operation Sei-Go, which included the employment of cholera, typhoid, plague and dysentery bioweapons—which in addition to killing tens of thousands of Chinese, may have backfired and killed 1,700 Japanese troops by one estimate.

Having used China as a laboratory for its bioweapons, the Japanese military began searching for ways to use the weapons against its chief military threat. In March 1942, plans were made to drop 150 million infected fleas in ten separate plague-bomb attacks against U.S. and Philippine forces, who were fighting a desperate last stand on the swampy Bataan Peninsula of the Philippines. However, Allied forces surrendered that April, before the attack could be executed. That same year, Japanese military commanders mulled biological attacks on Dutch Harbor, Alaska; Calcutta, India; and parts of Australia, but didn’t carry them out. Other schemes proposed including infecting U.S. cattle and grain crops, or using balloon bombs as a means to disperse plague agents in North America.

Japan’s military fortunes had turned for the worse by 1944, when U.S. forces launched an amphibious invasion of Saipan Island in the Marianas. A biological warfare detachment preemptively detached there was overrun before it could deploy its weapons. Separately, a Japanese submarine was dispatched to the island of Truk with twenty biowarfare specialists onboard, including two medical officers and deadly pathogens. However, it was sunk on route by another American submarine, allegedly the USS Swordfish. During the bloody battle of Iwo Jima, Unit 731 even planned to deploy bioweapons via two German-made gliders, according to Japanese pilot Shoichi Matsumoto. However, the two gliders broke down in flight while being transferred from Japan to Unit 731’s base in China.

As the specter of total defeat loomed ever larger over the Japanese military, Ishii conceived Operation PX in December of 1944 as a last-ditch suicide mission on the continental United States. The target: San Diego, California. The delivery mechanism would be new I-400 class of submarine aircraft carriers nearing completion—the largest type of submarine to enter service during World War II. These massive vessels measured well over a football field in length at 122 meters, displaced 6,670 tons, and carried a 140-millimeter gun and three Aichi M6A Seiran floatplanes. These could be stowed in the sub’s hangar thanks to their folding wings and removable floats.

By using similar methods to the plague attack in China on a more densely populated urban area, it was hoped that plague-flea bombs would start an epidemic that would kill tens of thousands of Californians. Furthermore, commando teams aboard the submarines would land on U.S. soil and further disseminate cholera and plague.

The attack, codenamed Operation Cherry Blossoms at Night at Ishii’s insistence, was scheduled for September 22, 1945—five weeks after the Japanese surrender on August 15. While some sources characterize the war’s ending as aborting the attack, others state the bioweapon bombing was cancelled considerably earlier in March of 1945 by Gen Yoshijiro Umezu, who recognized how useless it would be. Even in the “best case” that the plague caused thousands of casualties and a degree of economic disruption in the United States, it would have been delusional to believe it could reverse Japan’s calamitous situation on the battlefields of the western Pacific. However, an account by flight instructor Toshimi Mizobuchi implies that personnel were being assembled as late as July to carry out the attack.

In any event, the Japanese Navy appears to have had different plans for the I-400 submarines, initially intending to use them to deliver a devastating strike on the Panama Canal. The Seiran pilots spent time in June practicing attack runs on simulated canal locks when the mission was scrapped, and another scheme was hatched to launch surprise attacks on U.S. forces assembling at the Ulithi Atoll, with the M6As illegally disguised with U.S. markings. The two operational submarines, I-400 and I-401, were at sea heading for Ulithi when they received word of the Japanese surrender, and promptly catapulted or shoved their planes into the sea.

Following the Japanese surrender, Ishii cut a deal with the U.S. military: he would hand over all the research data from his atrocious experiments on live human subjects in exchange for immunity from war-crimes prosecution for him and his scientists—an arrangement not dissimilar to that struck with many scientists in Nazi Germany. The chief of the U.S. bioweapons program deemed the research “absolutely invaluable” because its findings could not have been obtained in the United States “due to scruples attached to experiments on humans.” Years later, there were even rumors that Ishii had traveled to Maryland to work with the U.S. bioweapons program at Fort Detrick.

The Soviet Union was not as lenient towards twelve members of Unit 731 it captured in Manchuria, finding them guilty of war crimes in the Khabarovsk trials in 1949—though the confessions by the accused were dismissed for decades as Cold War propaganda in the West. In any case, the Soviet Union also scooped up all the documentation it could find in the Pingfang facility, and used it to build its own bioweapons complex in Sverdlovsk, Russia (now Yekaterinburg). Focused on the production of anthrax, the Sverdlovsk facility experienced a deadly leak in 1979 that killed dozens.

Plans to employ bioweapons cannot help but seem especially short-sighted given the indiscriminate and unpredictable nature of diseases. If the attack at Bataan had been carried out, for example, soon-to-be victorious Japanese troops would likely have fallen victim to their own plague. Just as air raids broadly targeting the civilian populations generally proved both cruel and of little military effectiveness during World War II, biological weapons were mostly “useful” for killing civilians. And if a bioweapon ever had proven successful in triggering a pandemic, such an outcome could have proven disastrous for both sides of the conflict.