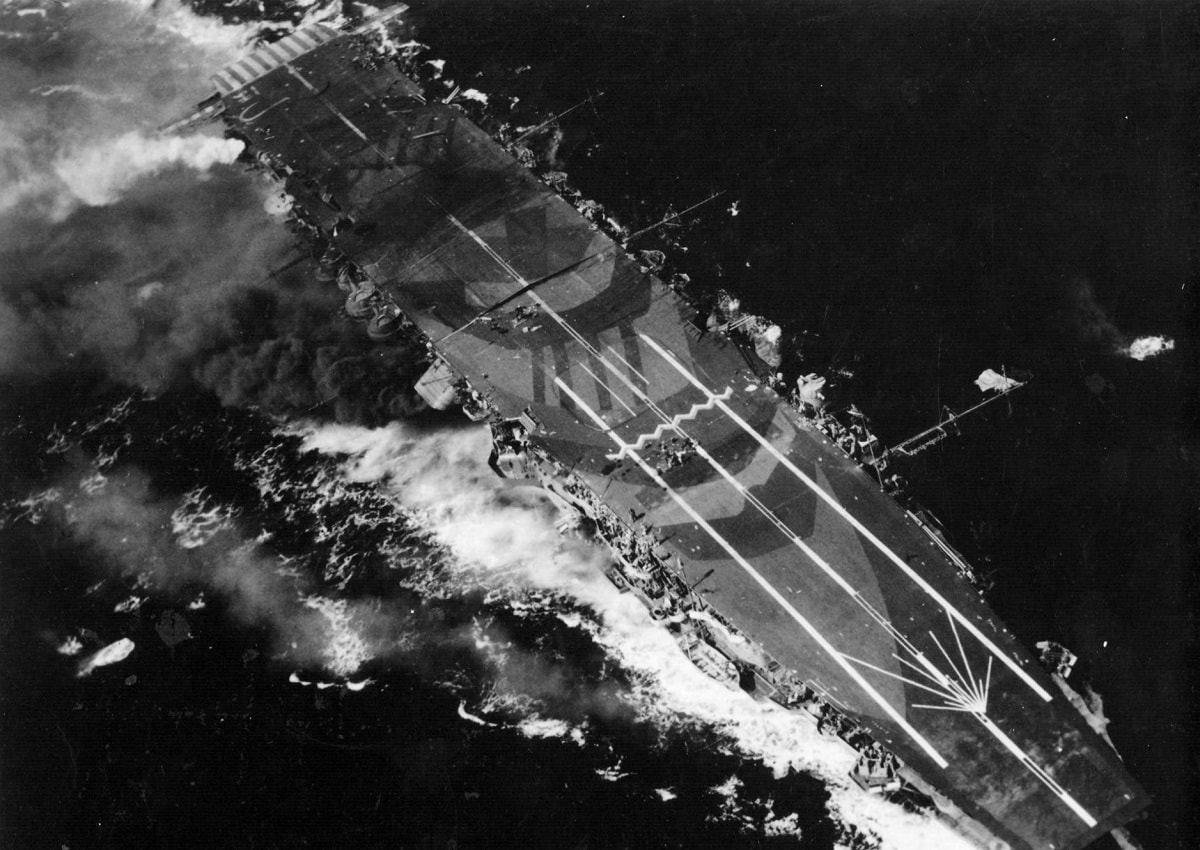 The crux of the Japanese plan for victory at Leyte Gulf was a sacrifice.

The battleships and aircraft carriers of Admiral William “Bull” Halsey’s Third Fleet were too much for even Takeo Kurita’s Center Force to contend with. But if the American ships could be drawn away from Leyte, then perhaps the Japanese could punch through on one side or the other to deliver a devastating blow to the American invasion fleet. To give its battleships a chance the Imperial Japanese Navy would offer up its last aircraft carriers as a sacrifice to Halsey. The plan was far too complex to have any right to succeed, but through mischance and accident almost spelled disaster for the Americans.

The Battle of Philippine Sea tore the guts out of the once formidable Japanese carrier force. In addition to the loss of three fleet carriers, the Japanese lost a huge number of aircraft and pilots in what became known as the “Marinas Turkey Shoot.” Ozawa’s Northern Force represented most of what the Japanese had left. Ozawa commanded from HIJMS Zuikaku, the last surviving aircraft carrier from the Pearl Harbor attack and a veteran of most of the carrier battles of the Pacific War. HIJMS Zuiho, a veteran light carrier, accompanied the force along with Chitose and Chiyoda, both converted from seaplane tenders. The battleships Hyuga and Ise, both of which had been relieved of their aft turrets in an effort to create more deck space for seaplanes, escorted the carriers along with three cruisers and nine destroyers. Although the four flight decks could support some 160 aircraft, only 108 were committed to the force.

Ozawa fully appreciated his situation and understood the destruction that the Third Fleet could rain down upon him and his ships. He also understood that Halsey would want the Japanese carriers, especially Zuikaku. The day of the battleship was done, and the time of the aircraft carrier had begun. But carriers are only useful with good aircraft and good pilots, and Ozawa didn’t have enough of either to inflict any damage on the Third Fleet. What he could do was attract Halsey’s attention.

Halsey believed that attacks from Vice Admiral Pete Mitscher’s carriers had forced Takeo Kurita’s Center Force to turn around. Given the choice between protection the Seventh Fleet and destroying the remaining carriers of the Imperial Japanese Navy, the decision seemed simple. Halsey and Mitscher had at their disposal five fleet carriers, five light carriers, six battleships, eight cruisers and plenty of destroyers, with the carrier force under the command. The carriers had already wreaked destruction on Kurita and had fended off successive waves of attacks from land-based aircraft, with the only significant loss being the light carrier USS Princeton.

Halsey’s battle squadron included Washington, South Dakota (both veterans of the battles off Guadalcanal), Massachusetts, Alabama, Iowa and New Jersey. The latter two ships, the most advanced battleships in the world, could make some thirty-two knots. Together, they were easily enough to manage either Ozawa or Kurita.

The Japanese force was effectively destroyed by the airstrikes, but Halsey wanted to bring the rest of Ozawa’s force under the guns of his battleships. Iowa, New Jersey and the other fast battleships of the Third Fleet would have made short work of Hyuga and Ise. But around the same time that carriers launched their first strikes, messages began to arrive from the Seventh Fleet indicating that not all was well. While Jesse Oldendorf’s battleships had handled the Japanese advance at Surigao Strait, Kurita’s massive Center Force had sneaked in from the other direction.

There is general consensus that Halsey reacted poorly to the news that Kurita had fallen upon the escort carriers of the Seventh Fleet. After repeated desperate messages, an intervention from Admiral Chester Nimitz himself got Halsey’s attention. At 11:15, Halsey detached a force of fast battleships, cruisers and destroyers to return to Leyte in the hopes of saving Taffy 3, or at least of catching Kurita before he could escape. The force was delayed for nearly two hours to refuel the destroyers, however. At 4:15pm Halsey further detached an even faster force, including Iowa, New Jersey, and an escort of cruisers and destroyers to attempt to catch the retreating Japanese force.

A smaller surface force of four cruisers and nine destroyers continued in pursuit of the retreating Ozawa. They eventually caught the crippled carrier Chiyoda and a destroyer, sinking both after a brief fight. Ozawa, receiving intelligence of the size and nature of the U.S. squadron, turned his own battleships around in an effort to give the Americans a final bloody nose. Fortunately, the two forces failed to find each other in the night, and Ozawa withdrew.

The Battle of Cape Engano was the end of the Japanese carrier fleet, a force that had terrorized the Pacific in 1941 and 1942, and which had remained a threat until 1944. Now, the few scattered carriers and aircraft would pose no further obstruction to the U.S. Navy. Ozawa was lucky to escape, but he had done the job of drawing the American fleet away from Leyte. Of course, Kurita squandered the opportunity, making the sacrifice of Ozawa’s ships and men pointless.