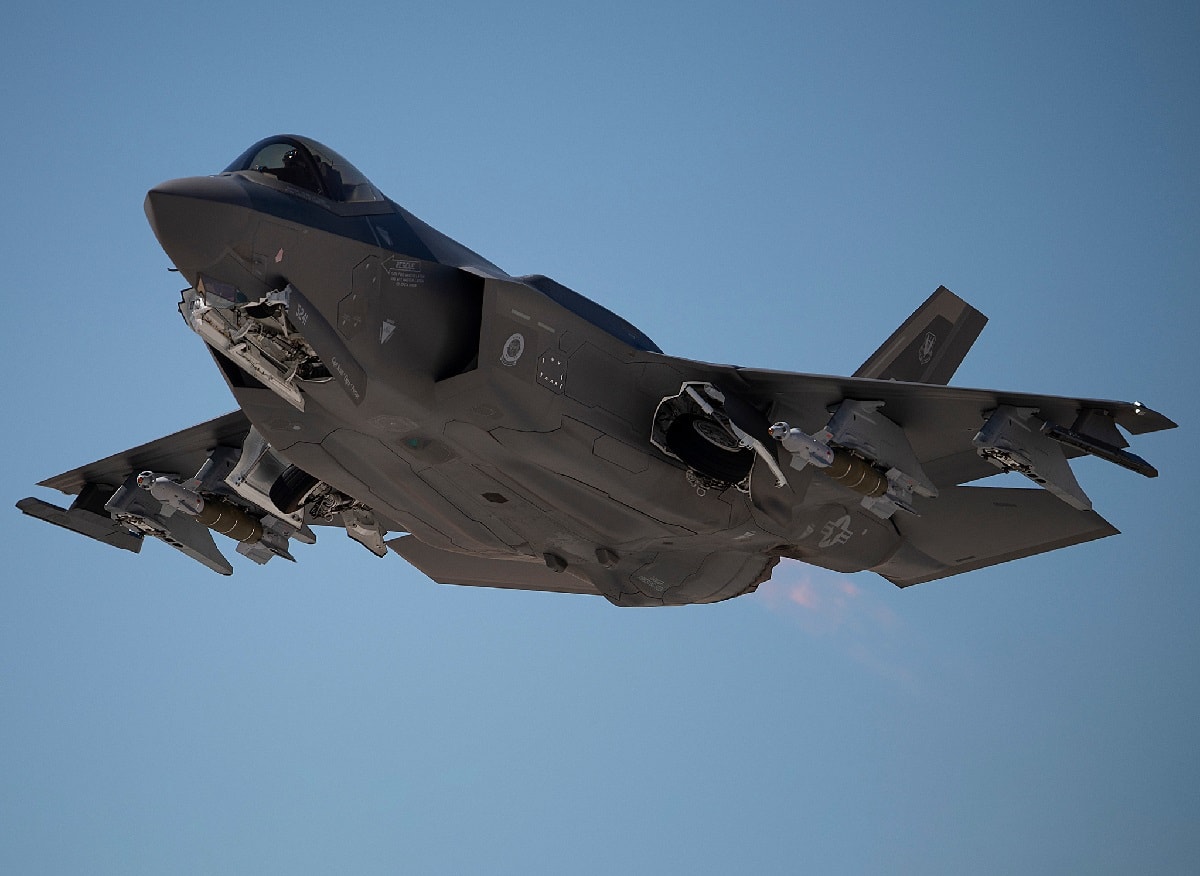 An F-35 Lightning II fighter jet assigned to the 422nd Test and Evaluation Squadron (TES) takes off from Nellis Air Force Base, Nevada, May 21, 2020. The 422nd TES utilized GBU-49 bombs during a routine training mission to test the bombs capabilities with the F-35. (U.S. Air Force photo by Airman 1st Class Bryan Guthrie)

A few years ago I outlined what the contours of a war between China and the United States might look like. Although disagreements between Washington and Beijing over Taiwan and the South China Sea have hardly subsided, it isn’t out of the question that affairs on the Korean Peninsula could provide the spark for conflict. If the tense situation in Korea led to war between the United States and China, how would the conflict start? Who would have the advantage? And how would it end?

How it Would Start

War between North Korea, or the DPRK, and America is more likely to ignite a war between China and the U.S. than vice versa, although it’s not incomprehensible that Pyongyang might take advantage of U.S. distraction with China to make a move against South Korea. But if we assume the former, it would change the military situation at the beginning of the U.S.-China conflict. Whereas in most scenarios a war happens according to Beijing’s timetable, and consequently to Beijing’s advantage, if North Korea triggers a conflict China may be forced into a fight that it does not want and is not fully prepared for. At the very least, it would allow U.S. forces to fully mobilize in expectation of fighting against China. Even if the Chinese were allowed to launch the first blow, U.S. forces would be on high alert, tracking Chinese moves and capable of responding immediately. The experience of November 1950, in which China was allowed to launch a surprise attack, would surely be at the top of the minds of U.S. commanders.

China could decide to intervene in a new Korean War under two circumstances; first, if it believed that the U.S.-ROK coalition was on the verge of destroying the DPRK (as was the case in 1950), and second, if it believed that the DPRK was winning and that Chinese intervention could preempt U.S. escalation. If the former case, China’s war objectives would be to prevent the destruction of the DPRK, and to prevent the DPRK from unleashing its nuclear arsenal. In the latter, the objective would be the opposite; to secure North Korean gains (whether these amounted to the entire Korean Peninsula or not), and to eliminate any temptation on the U.S. part to escalate to nuclear weapons. In either case, U.S. and ROK planners would pay careful attention to Chinese maneuvers, and both countries would have fully mobilized for war.

Neither China nor North Korea have a lot of friends around the world. Still, both would likely enjoy benevolent neutrality from Russia, which would help significantly in keeping the militaries of both supplied with fuel, spare parts and ammunition.

The rest of the world would likely support the United States and the ROK to various degrees, less if the U.S .started the war, more if the DPRK started it. China would undoubtedly worry about its southwestern flank, but India is unlikely to intervene in any conflict that does not directly involve its interests. America’s European and Pacific allies would offer rhetorical and potentially some minor military support.

Japan’s participation would be the biggest question mark. Tokyo regards both North Korea and the growth of Chinese military power as key national security threats. Japan might well come under attack from North Korea during intra-Korean hostilities. At the very least, Japan would offer basing and support to the United States and (more quietly) to the ROK. But if Tokyo perceived that a Chinese-North Korean axis might win (as apart from merely preserving a rump DPRK), then Tokyo might well intervene on the U.S. side in a meaningful way. The combination of Tokyo’s military, financial, and economic might could significantly affect the course of the conflict.

The Course of Combat

On balance, South Korea is considerably more powerful than North Korea. While North Korea’s forces can cause enormous damage to South Korea in a conventional conflict, they cannot hope to destroy the Republic of Korea, or ROK, on their own. Attacks in depth against North Korean communications and logistics would make it difficult for the North Korean Army, or KPA, to maneuver. And in the early days of the conflict, South Korean and American airpower would utterly control the sky.

Chinese intervention could change this equation. War between the Koreas would create a problem for the U.S. by introducing the necessity to supply and maintain large-scale land forces on the Korean Peninsula. Unleashed against South Korea, Chinese ballistic and land-attack cruise missiles could wreak havoc on U.S. and ROK military installations. Missiles would destroy Coalition aircraft on the ground, and reduce airfield readiness. Attacks on staging and logistics areas would give U.S. and ROK forces a taste of the same problems they had dished out to the North Koreans. US naval forces and installations would also come under attack.

In the first Korean War, the United States restrained itself from attacking China directly. In a new Korean War, the Americans would not exercise such forbearance. Chinese military installations associated with strikes against Korea would come under attack from U.S. air, missile, and naval assets. The PLAN, whether it took to sea or remained in port, would find itself a juicy target, although the U.S. Navy might limit its attacks geographically. Chinese airbases within China, and the aircraft based on them, would also suffer from U.S. attacks.

How it Would End

In almost every conceivable scenario, Beijing would work hard to try to restrain Pyongyang from using its nuclear, chemical, and biological arsenals. Indeed, the United States might well declare from an early point that it viewed any use of nuclear weapons by the Beijing-Pyongyang axis as implicating both partners, and thus requiring retaliation against both.

If Beijing and Washington could avoid nuclear combat, the end of the war would turn on the survival of the DPRK. North Korea cannot indefinitely stand against the combined might of the U.S. and the ROK, much less the addition of Japan to the Coalition. If Chinese intervention can either disrupt the U.S.-ROK war machine through brute force (the destruction of sufficient military assets to make it impossible to continue), or coerce the U.S. to give up through the imposition of high costs, the DPRK could survive and remain in control of some portion of the Korean Peninsula (whether large or small would depend on the timing and extent of Chinese intervention). If the Chinese can’t accomplish this, then the DPRK will cease to exist, and the ROK will extend to the Chinese border.

In the first scenario, the world looks much like it does today, only with substantial destruction across Northeast Asia, and profound disruption to global economic and financial systems. The second scenario sees the same kind of disruption and destruction, but China is the clear loser, with potentially dire implications for the power and legitimacy of the Communist Party of China.

It is unlikely that the Chinese could win the war for North Korea, but they might well be able to prevent the DPRK from losing. But there is little question that China does not want to yoke its growing military machine to the whims of Pyongyang. Even if China could win such a war, the devastation to its trade and financial relationships would vastly exceed the value of preserving the DPRK. This is a war that China wants to avoid, and would only join in desperation.

Robert Farley is author of The Battleship Book. He serves as a senior lecturer at the Patterson School of Diplomacy and International Commerce at the University of Kentucky. His work includes military doctrine, national security and maritime affairs. He blogs at Lawyers, Guns and Money, Information Dissemination and the Diplomat.