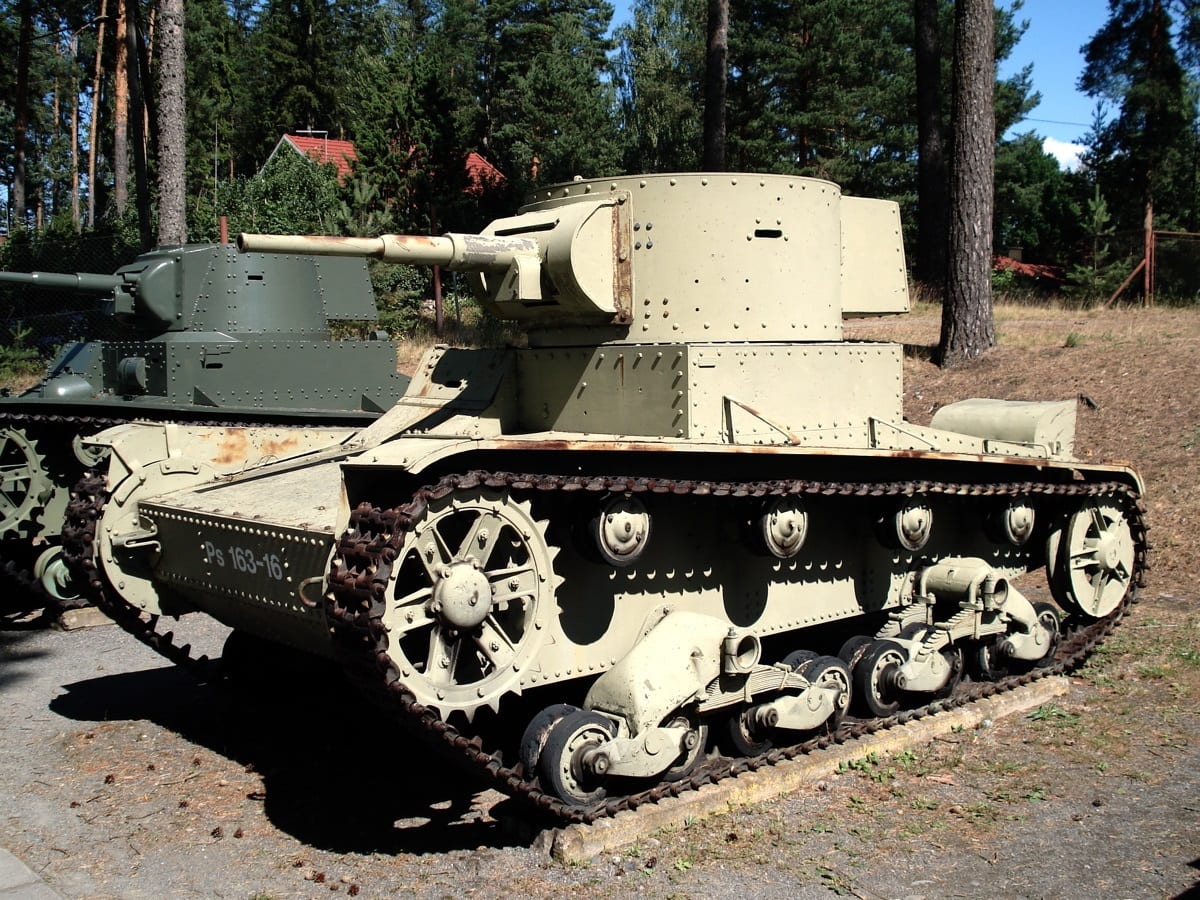 Early in the morning of October 29, 1936 a column of T-26 tanks went rattling down the road towards Seseña, a Spanish town on the outskirts of Madrid ostensibly held by forces loyal to the Republican government backed by Moscow.

Leading the column was a Latvian communist named Paul Arman, a captain in the Soviet Red Army. Of the forty-five men under his command, there were thirty Soviet military personnel and fifteen Spanish recruits manning the guns.

As he approached Seseña he ran into an artillery battery defending a road block. Arman asked the troops in French to let him pass. They tentatively asked “Italiano?” referring to troops dispatched by Mussolini to support the General Forces.

Arman suddenly realized the town was occupied by the Fascist side of the Spanish Civil War. He quickly told his crew to open fire and beat the artillery crew on the draw. The flamboyant Latvian then led his tanks into the Red Army’s first tank battle.

The war had begun earlier that summer when right-wing Nationalist generals mobilized to overthrow the Spanish Republican government. Nazi Germany and Italy promptly intervened in favor of the Fascist General Franco by supplying troops, tanks, air support and vital air and maritime logistics. Nationalist troops were soon closing in on Madrid.

Stalin supported the Republicans coalition, which included diverse left-wing elements. For its part, the Red Army had only begun building up a large tank fleet at the urging of the forward-thinking Marshal Mikhail Tukachevsky—and the service was eager to see just how well they would perform in battle.

The T-26, a Soviet spinoff of a Vickers 6-ton tank, was thinly armored—no more than fifteen millimeters of steel—and fairly slow, with a maximum speed of nineteen miles per hour or a little over half that off road. It was not expected to operate for more than a few hundred hours before breaking down.

However, it did have one clear strength: a 45-millimeter gun with good anti-personnel and armor-penetrating capabilities, as well as a coaxial Degtyaryov turret machine-gun.

The T-26s were accompanied by 40 BA-3 and BA-6 heavy armored cars based on the Ford-Timkins truck chassis, with the same turrets and armament as the T-26.

The Soviet crew were originally intended only to train Spanish crews at a school in Archene, but within weeks Madrid seemed on the verge of falling. Hastily three tank units were formed and began seeing action on October 26. But Arman’s company made the biggest splash.

Armani’s improvised unit was intended to support an attack by two infantry brigades trying to drive Nationalists away from the southern approaches to Madrid. Arman is said to joked to his Spanish compatriots “The situation is not so hopeless. They have fifteen thousand soldiers, we have fifteen tanks, so the strengths are equal!”

To add to the dire situation, the Spanish Prime Minister publicly revealed the plans for the attack in a radio broadcast the evening prior!

When the infantry proved slow to advance that morning, Arman impatiently pushed his tanks ahead. Things didn’t begin promisingly when three T-26s were promptly disabled by anti-tank mines on the road.

Other problems arose when his unit stormed Seseña. The T-26’s poor vision devices forced tank commanders to “unbutton” the turret hatch and peer about to maintain any sort of situational awareness. This proved a weakness when Nationalist troops threw Molotov cocktails at tanks squeezing through narrow town streets, allowing burning gasoline to pour down the hatch, knocking out two T-26s and injuring Arman in his.

Another issue was that only platoon leader T-26s (one out of every three) had a radio, and even that was useless on the move and complicated by Russian/Spanish communication issues. Officers were supposed to transmit instructions by waving signal flags, but this concept was soon abandoned in Spain. Command-and-control largely became a matter of follow-the-leader—though leading tanks were usually the first to be knocked out!

There they were charged by three Italian L3/35 tankettes from the 1st Nationalist Tank Company, rounds from their twin 8-millimeter machine guns rattling ineffectually off the Republican tanks’ armor. One T-26’s cannon made a deeper impression, disabling one L3/35 and setting a flamethrower-armed L3 ablaze. Eventually, a Spanish 75-millimeter howitzer destroyed the tank with direct fire.

The T-26 commanded by Lt. Semyon Osadchy rammed another 3.5-ton tankette, flipping it over into a ditch.

These encounters are purportedly the first tank-on-tank battle fought by the Soviet Union.

There was just one problem—while Arman’s company was rampaging behind Nationalist lines, it wasn’t supporting the attack by the Republican Lister infantry brigade, which failed to break through at Seseña.

To be fair, some accounts claim that Arman’s assault caused the Nationalists to divert troops from their offensive on Madrid.

Similar problems would subsequently blunt the effects of Soviet tank operations in Spain—terrible coordination with the infantry, and weak or non-existent air and artillery support. That meant that while Soviet and Spanish tank units often gave a good accounting of themselves and clearly overmatched Nationalist tanks, these local successes failed to translate into operational gains.

It’s usually fair to blame that problem on doctrinal failures, but in the Spanish Civil War the Republicans were fighting for survival from day one by relying heavily on inexperienced new recruits. It simply wasn’t possible to remove entire units from the frontline to train them properly in armor and infantry tactics. Even tank crews received most of their instruction in parked vehicles prior to seeing battle.

Soviet/Spanish tankers were committed to numerous supporting actions around Madrid in November and December, where they performed well but sustained heavy losses. These were compensated by the arrival of fifty-six more T-26s in November.

They soon encountered some of the first thirty-three Panzer I tanks shipped over by Nazi Germany. The light tanks, armed only with twin 7.92-millimeter machine guns, could pierce a T-26’s armor at 100 to 150 meters range using armor-piercing bullets—but the Panzers were easily dispatched at a 1,000 meters with accurate fire from Republican tankers, and twenty-eight had been knocked out by the end of November. It became necessary to attach anti-tank artillery to protect Nationalist tank units.

However, a lack of logistical and maintenance support furthermore meant the high tempo of T-26 operations was unsustainable.

As Zaloga writes: “The Red Army had never conducted any prolonged tank operations away from their peacetime training bases, so the combat experiences in Spain were an eye-opening introduction to the day-to-day technical realities that had plagued tankers ever since World War I… As was clear from the initial fighting, tank units could not be employed non-stop, day-and-night like infantry, and had to be carefully husbanded for only the most important missions.”

One technique the Russians picked up from the Spanish was transporting their tanks as close to the frontline as possible using trains or transporter trucks, sparing the break-down-prone vehicles from unnecessary wear and tear.

Despite the inability to secure decisive victories, Soviet tank operations brought the Spanish Republic’s government time to shore up its defenses in late 1936 and demonstrated the superiority of the cannon-armed tank on the battlefield. Unfortunately, those lessons could not prevent further setbacks that followed in 1937 and 1938.