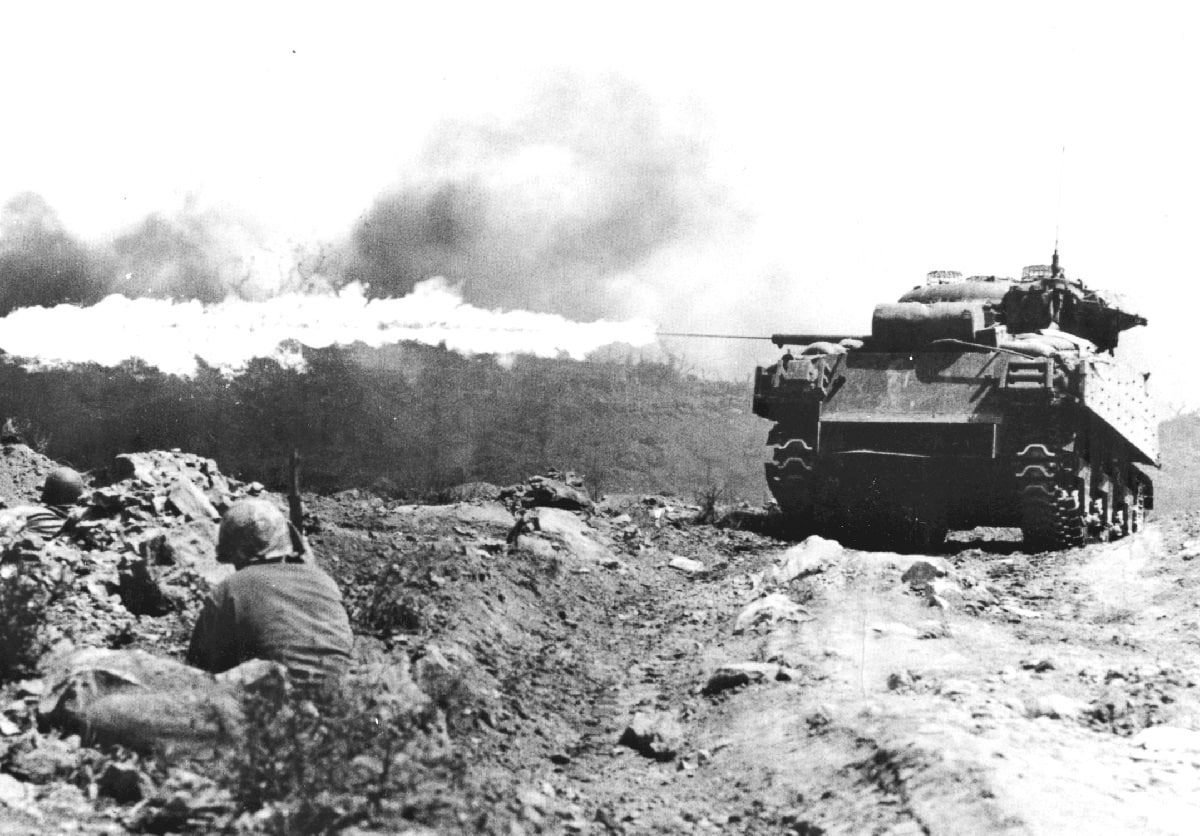 After nearly eighty years of continuous service, in March 2020 the U.S. Marine Corps announced it planned to retire its three remaining tank battalions in a bid to re-model the force for a great-power conflict. This article is the second part of a series that looks at the unique history of the Marine armored branch.

Following two decades of experimentation, Marine Corps tank units had their moment of truth at the Battle of Tarawa in November 1943. As recounted in an earlier article, though most of the invasion force’s medium tanks were lost in the first few hours of a disastrous amphibious landing, three Sherman tanks survived and became the bulwark behind which hard-pressed Marines rallied and cleared out Japanese fortifications.

The tank had proven its value in supporting Marine amphibious landings, but its use clearly needed perfecting. The process by which the Marines modified their tanks and tactics to the realities of the Pacific is brilliantly detailed in Steven Zaloga’s U.S. Marine Corps Tanks of World War II.

Stuart light tanks, for example, lacked adequate armor and firepower, so Marine tank battalions—six of which with 46 tanks each saw action by the war’s end—converted to diesel-engine M4A2 Shermans, though some smaller support units still fielded M3 and M5 Stuart light tanks.

Tank-infantry cooperation in Guadalcanal and Tarawa had been crude, with several tanks lost attacking without infantry support. Problematically, grunts lacked reliable means of talking with tankers short of clambering on the hull and knocking on the hatch.

That changed with the installation of “tank telephones” on the hull. Some Marine tanks even began lugging SCR-300 infantry radios as well as spigoted water tanks on their backs to keep the grunts hydrated, as difficulties supplying freshwater infamously bedeviled landing operations. Shermans with hydraulic dozer blades also proved useful for burying fortified caverns, clearing roads and even pushing knocked-out tanks out of the way.

Japanese infantry and artillery could reap a terrible toll on attacking infantry—but their 37-millimeter anti-tank guns could not penetrate the Sherman’s three inches of armor. Even high-velocity Type 1 47-millimeter anti-tank guns introduced in 1943 (2,300 built) could only reliably pierce a Sherman’s side or rear armor. Some heavy anti-aircraft guns, like the 75-millimeter Type 88, could overmatch an M4’s armor, but these were not designed for field mobility and were mostly reserved for the defense of the home islands.

In June 1944 U.S troops began a series of amphibious assault on the Mariana Islands in order to secure bases from which B-29 strategic bombers could strike Japan. The 2nd and 4th Tank Battalion landed on Saipan June 15 with their turret tops painted red or yellow so they could be distinguished from Japanese tanks by U.S. Navy pilots. That proved a wise precaution, because little island became the site of the largest tank battle of the Pacific Theater.

First, on the evening of June 16, Shermans defeated a night attack by Japanese Special Naval Landing Force marines and their Type 2 amphibious tanks. Then at dawn, forty-four Type 97 and Type 95 tanks from the 9th Tank Regiment swarmed over a ridge and stormed the beachhead. In the hours-long brawl that followed 33 were knocked out by Marine Shermans, bazookas and anti-tank artillery including towed 37-millimeter guns and 75-millimeter-gun armed half-tracks. You can see footage of the aftermath here. 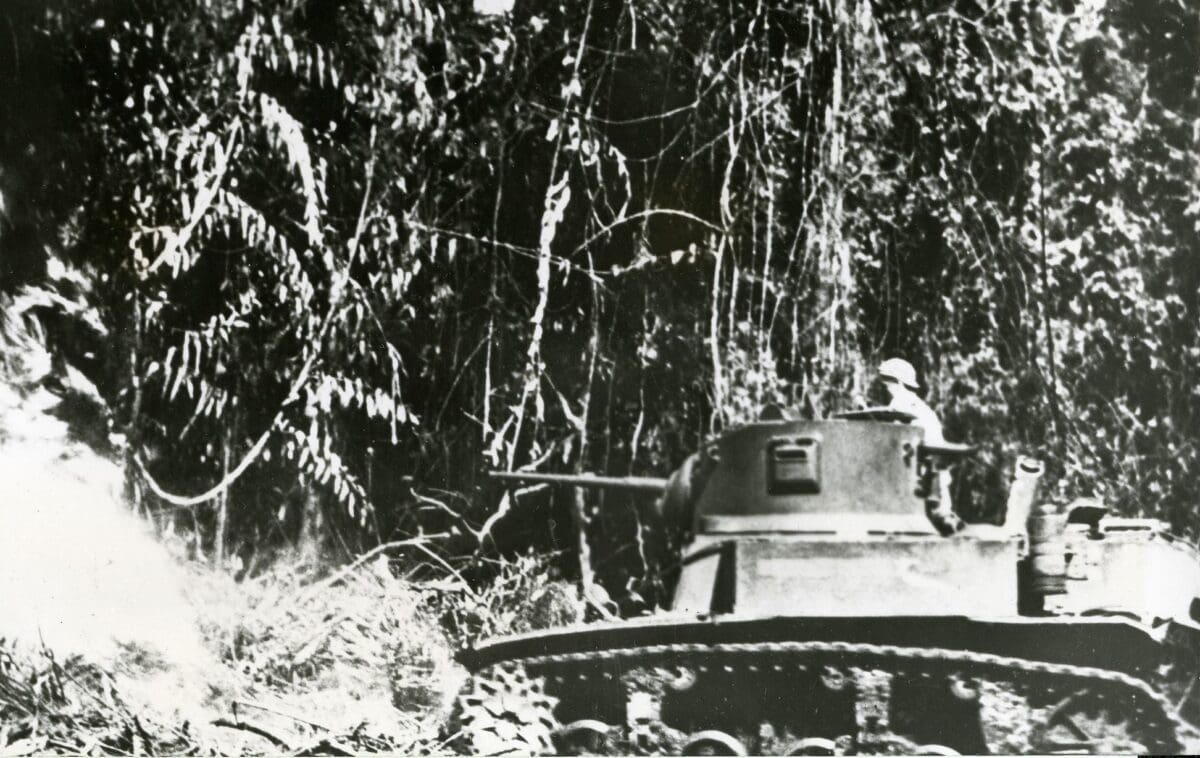 U.S. Flamethrowing tank blasts Japanese on Bougainville. Flames sear a Japanese pillbox as an American soldier emerges from the turret of a flame-throwing tank during the American advance on Bougainville Island in the Northern Solomons in the South Pacific. Tanks with flame-throwing units such as this one proved invaluable in the Bougainville fighting U.S. forces expanded their Empress Augusta Bay beachhead on the island’s western coast after crushing desperate Japanese attempts to crack the American lines. In March 1944, alone, an estimated 5,000 Japanese soldiers were killed in the fighting on the island, where the enemy, entirely cut off from supplies, faces annihilation or capture.

In July, the 4th tank battalion wiped out another company-sized tank unit on Tinian, while the 3rd destroyed the last two companies of the 9th Tank Regiment (29 tanks) as it engaged in another futile counterattack at Guam.

Despite their bravery, Japanese tankers faced impossible odds—with little over an inch of armor at best, the 18-ton Chi-Ha were effortlessly penetrated by Marine anti-tank weapons, but could only threaten a 30-ton Sherman’s side or rear armor. The 8-ton Type 95 Ha-Go lacked even that scant hope—and 75-millimeter armor-piercing shells from Shermans were known to punch clean through one side of a Ha-Go’s thin armor and out the other.

Turning up the Heat

But Japanese fortifications proved more resilient to 75-millimeter shells, so Marines increasingly turned to flamethrowers, horrifying weapons capable of flushing out the most fanatical defenders. However, infantry flamethrowers could not reach much further than 30 to 40 meters, limiting an operator’s life expectancy.

Initially, the Marines tried installing M1A1 infantry flamethrowers to fire out the ‘pistol ports’ in tanks, but this proved unwieldy when combat-tested in the battle of Arawe.

Later, mechanics in Hawaii swapped out the main guns on twenty-four M3A1 light tanks with Canadian-built Ronson Mark IV flamethrowers fed by 170-gallon fuel tanks. The projectors on these M3A1 Satan tanks had a range of 75 meters, but limited turret traverse to 180 degrees.

Two companies, each with twelve Satans and three gun-armed M5 escorts, saw action on Saipan and Tinian, where they were used with some success to evict defenders holed up in fortified caverns. But the Ronson’s bulk made the light tank’s interior impossibly cramped, so thereafter the Marines focused on two types of Sherman-mounted flamethrowers.

Roughly half the M4A2 tanks in each battalion ha their hull machineguns replaced with shorter range (65 meters) E4-5 “auxiliary” flamethrowers while retaining their 75-millimeter main gun. Mixed in were smaller numbers of more-effective Sherman POAs with Ronson flamethrowers fed by 290-gallon tanks installed in place of the main gun.

The Marines developed a “corkscrew and blowtorch” tactic, in which gun-armed Shermans cracked open bunkers with 75-millimeter shells before using flame-tanks to douse the insides with burning fluid.

Beefing Up Protection at Peleliu

In the ensuing Marine landing at Peleliu on September 15, 1944, Shermans of the 1st Tank Battalion easily eradicated another armored counterattack by fifteen Type 95 tanks threatening to overrun Marines attempting to secure an airstrip.

But Japanese infantry were well-fortified in the volcanic island and used a network of underground passages to attack from unexpected directions. While Marine riflemen took the worst of the ensuing grim battle of attrition, 45 of the 1st battalion’s 46 tanks were knocked out at some point (nine of them permanently) and two-thirds of the unit’s 31 officers were killed or wounded.

An even tougher fight lay ahead for the Marines on Iwo Jima, to which were committed the 3rd, 4th and 5th Tank Battalions.  Confronting them were five battalions of anti-tank guns, the 26th Tank regiment with twenty-two dug-in Type 97 tanks, and scores of anti-tank mines with ceramic cases that didn’t trip metal detectors.

Though the Sherman’s frontal armor considerably over-matched Japanese anti-tank gun, they still needed protection from close assaults by Japanese infantry who, lacking portable ranged anti-tank weapons, resorted to suicidally lunging at tanks with grenade bundles, satchel charges or mines on the tip of a pole.

Type 99 magnetic mines designed to latch onto a tank’s metallic hull posed the greatest threat. As a countermeasure, Marine tankers bolted wooden planking onto their side hulls, and later sandwiched in a coating of concrete for additional protection. At Okinawa, units even girded their suspension bogies with wooden slats to protect against satchel charges.

As more anti-tank artillery was encountered, Marine tankers piled on sandbags or welded on spare tracks onto the front, side and rear-decks of their tanks, placing additional inches of material between them and 47-millimeter shells racing towards them at two-and-a-half times the speed of sound.

Despite the heavy losses suffered by Marine tanks units, it was clear they had spared the lives of thousands of Marine riflemen, making them “the most effective supporting weapon” according to the commander of the 9th Marine Division. But the armor branch had one sharp fight ahead of it in Okinawa that April as recounted in the next article in this series.