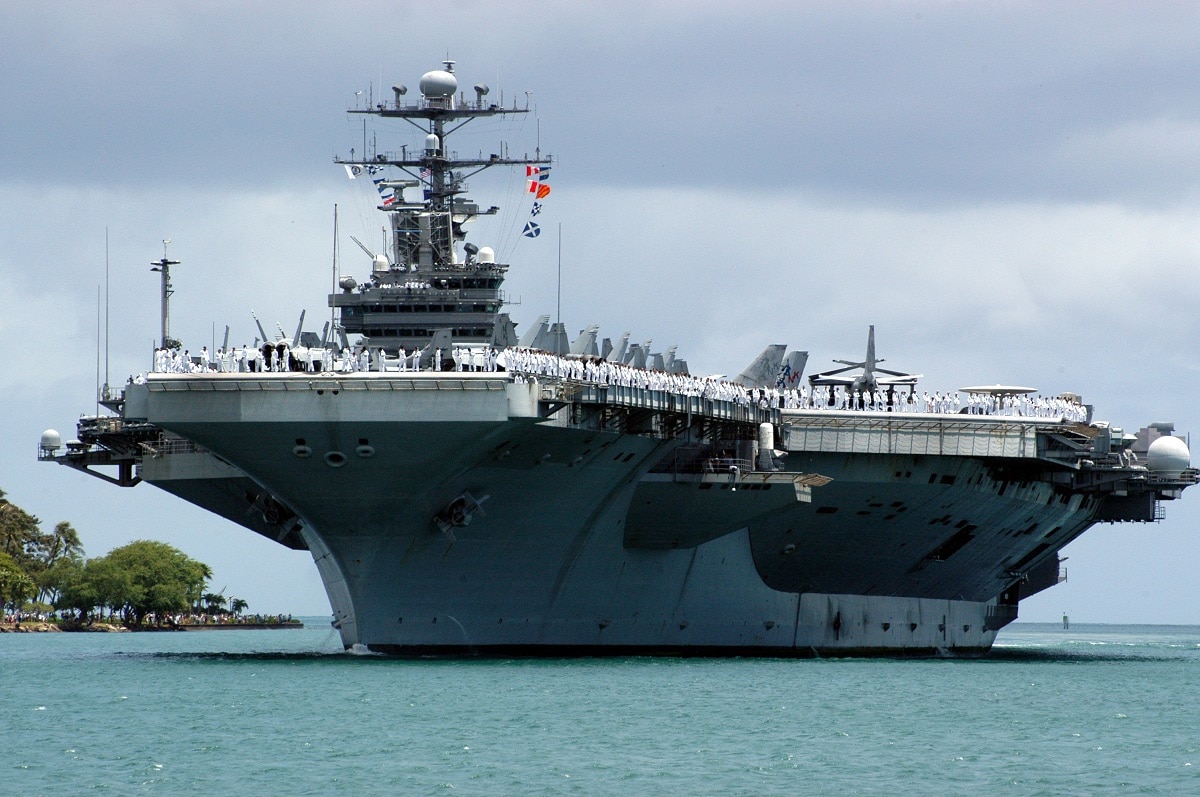 040629-N-3019M-001 PEARL HARBOR, Hawaii (June 29, 2004) Sailors aboard the Nimitz-class aircraft carrier USS John C. Stennis (CVN 74) Òman the railsÓ as she pulls through the mouth of Pearl Harbor. Stennis arrived as part of RIMPAC (Rim of the Pacific Maritime Exercises), which includes the participation of seven countries. The objectives of the exercises are enhancing combat readiness and exploiting opportunities for cooperation with multinational unties. U.S. Navy photo by Journalist Seaman Ryan C. McGinley. (RELEASED)

A series of collisions involving U.S. Navy destroyers in 2016 and 2017—including two incidents that left sixteen sailors dead—have raised questions as to why the maritime fighting branch appears to be suffering the same accident again and again.

However, it can take time for organizations to learn from mistakes and implement solutions to deal with them. This fact was illustrated when it took no less than three catastrophic fires on U.S. aircraft carriers between 1966 and 1969 that killed more than 200 sailors before major reforms decisively improved safety onboard the giant flat tops. This final article in a three-part series looks at the last incident which occurred on the USS Enterprise.

All three of the disasters were triggered in part by rocket munitions. In 1966, a magnesium flare tossed into an ammunition locker caused rockets to detonate aboard the USS Oriskany, killing forty-four. Then in 1967, a Zuni rocket mounted on a fighter onboard the USS Forrestal accidentally launched due to a power surge, blasting into the side of an A-4 attack jet. This began a chain-reaction of detonating bombs and jet fuel that threatened to consume the conventionally powered supercarrier.

However, these last two incidents occurred while the crew were undergoing the stress of launching dozens of jet aircraft a day into combat over Vietnam. Such was not the case for the USS Enterprise as she cruised seventy miles southwest of Pearl Harbor, Hawaii on in January 1969. The 1,100-foot long Enterprise was the world’s first nuclear-powered aircraft carrier. Escorted by the destroyer USS Rodgers and the missile cruiser USS Bainbridge, the supercarrier was undergoing flight drills in preparation for another deployment to Vietnam.

At 6:45 AM on January 14 the carrier began launching a mix of F-4J Phantom fighters, A-6 and A-7 attack planes, and E-2 and KA-3 support aircraft. By 8:15 AM there were a total of fifteen aircraft prepping for launch on the flight deck. These included Phantom fighter 405 which was loaded with six 500-pound Mark 82 bombs and two LAU-10 rocket-launching pods, each containing four unguided five-inch Zuni rockets. As usual, an MD-3A huffer—a tractor-mobile heating unit used to warm up jet-engines—was positioned on the starboard side of the fighter, ready to prepare for it takeoff.

However, several crewmen noticed that the exhaust from the huffer was gusting onto one of the Phantom’s rocket pods only two feet away. At that distance, the heat would have amounted to more than 320 degrees while Fahrenheit the huffer was idling. The crew were not trained to know the cook-off temperature of the weapons they were handling, but several mentioned their concern to a nearby ordnance chief and other personnel. However, they were either preoccupied with fusing bombs in time for launch, or he couldn’t hear what was being said over the noise of nearby jet engines. Despite four different surviving crewmen admitting afterwards that they were aware of the unsafe positioning of the huffer, nobody acted on the situation in time.

The Zuni rocket employed a Composition B warhead, composed of 60 percent RDX and 40 percent TNT mixed with wax that was prone to cooking off when exposed to roughly 350 degrees of heat. M65 bombs made of Composition B had inflicted the lion’s share of the damage in the Forrestal fire, and the navy was then in the process of converting to more stable Composition H6 munitions.

At 8:18 the exhaust heat triggered the fifteen-pound warhead of one of the Zuni rockets. The resulting blast ruptured the Phantom’s fuel tank, which poured burning JP-5 jet fuel onto the deck, catching three more Phantoms on fire. Amongst the first victims of the conflagration were two operators of the huffer unit and the F-4 pilot.

A horrible chain reaction unfolded, similar to that which had occurred on the USS Forrestal. The heat from the burning fuel caused three more Zuni rockets to explode after two minutes, blasting a hole into the aircraft hangar below—allowing burning jet fuel to pour in.

The devastation had only just begun. The growing blaze then caused a 500 pound bomb mounted on the Phantom to detonate, gouging an eight-foot diameter hole into the deck, setting off secondary fires three decks below.

In his definitive book on the incident, Enterprise crewman Michael Carlin recalled the moment:

Everyone was stunned by the explosion and the shrapnel that hit all about the island…. Both twin agent units [full of flame-retardant foam] were knocked out. Hoses flopped about wildly, geysering spumes of foam and salt water. Men were on fire, the wounded moved feebly, the dead were still.

As ordnance detonations rippled across the ship, a rack of three Mark 82 bombs detonated all at once, blowing out a giant eighteen by twenty-two foot hole in the deck and causing a large KA-3 tanker to ignite with thousands of gallons of fuel onboard, sending a massive fireball scything into damage control crews.

More than eighteen explosions would tear open the Enterprise’s deck in eight places. Fortunately, her crew reacted efficiently to combat the blaze. Her skipper, Captain Kent Lee, turned the ship portside into the wind to blow away smoke, while sailors rushed forwards to combat the fire despite the detonating munitions, managing to roll the remaining bombs off the deck into the ocean before they could catch fire. The destroyer Rodgers put herself at risk by slewing in closely beside the Enterprise in order to spray her down with fire hoses. The efforts paid off—despite suffering a total of eighteen ordnance detonations, the crew brought the fire under control after forty minutes, and extinguished it entirely by noon.

The raging blaze had injured 314 crewmen and killed twenty-eight. Fortunately, this was significantly lower number of fatalities than had occurred on the Oriskany and Forrestal. Indeed, Captain Lee attributed the lower death toll to firefighting lessons learned from the earlier catastrophes.

Twisted and scarred by the blaze, with fifteen of her jets reduced to smoldering wrecks, the Enterprise limped back into Pearl Harbor, where she underwent fifty-one days of repairs costing $126 million ($866 million in 2017 dollars). The venerable carrier went on to serve forty-three more years before being retired in 2012. As for Captain Kent Lee, he would play an important role in the development of the FA-18 Hornet fighter jet. He passed away this August of 2017. 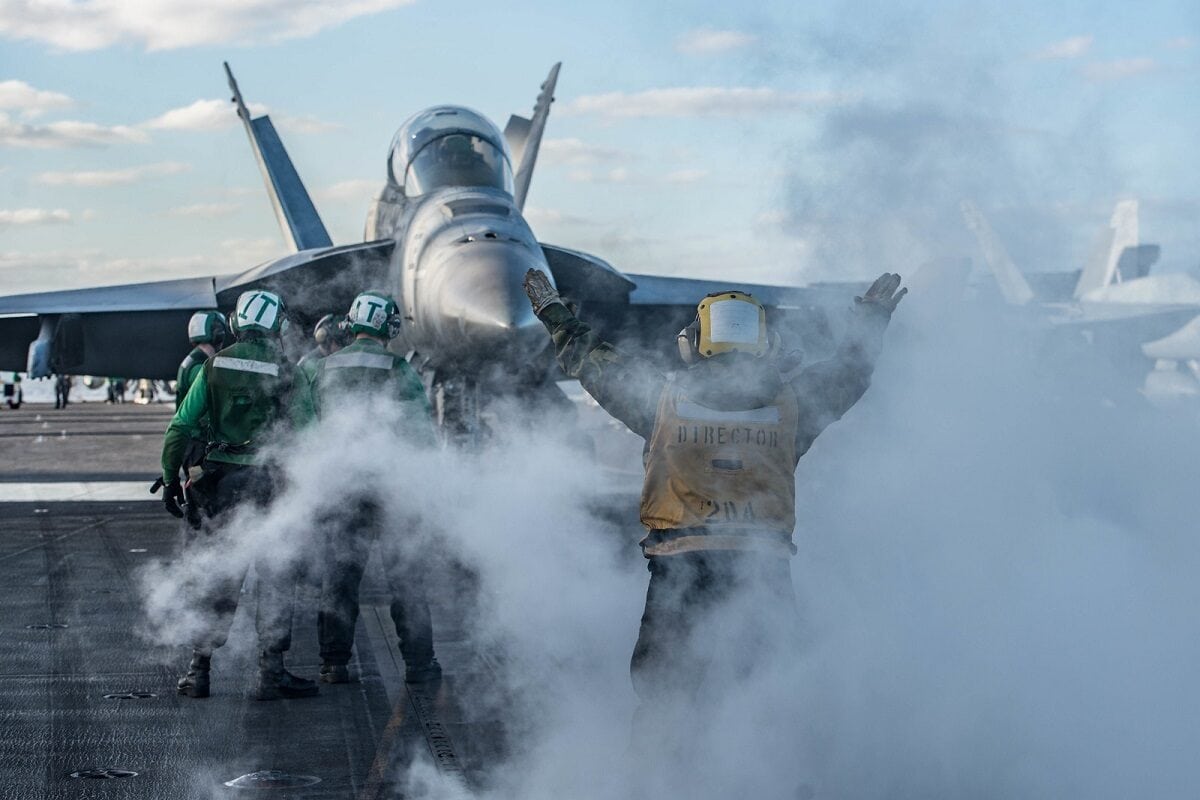 CORAL SEA (July 14, 2019) Aviation Boatswain’s Mate (Handling) 3rd Class Ashley Folds, from New York, directs an F/A-18F Super Hornet from Strike Fighter Squadron (VFA) 102 into launch position on the flight deck aboard the Navy’s forward-deployed aircraft carrier USS Ronald Reagan (CVN 76). Ronald Reagan is participating in Talisman Sabre 2019, which illustrates the closeness of the Australian and U.S. alliance and the strength of the military-to-military relationship. It is the eighth iteration of this exercise. Ronald Reagan, the flagship of Carrier Strike Group 5, provides a combat-ready force that protects and defends the collective maritime interests of its allies and partners in the Indo-Pacific region. (U.S. Navy photo by Mass Communication Specialist 2nd Class Janweb B. Lagazo/Released) 190714-N-CL027-1239

The painfully won experience from the Enterprise fire inspired a final round of introspection from the navy, which you can read in the mandatory JAG investigation here. Prior to the fire, sailors were already aware of the danger posed by the huffer heating units to aircraft weapons, due to earlier, nonlethal incidents. The crew of the USS Constellation had even devised longer huffer hoses for safer use. However, this awareness did not lead to navy-wide policies which could have prevented the accident, and the ordnance crew on the Enterprise’s deck failed to react promptly to a deadly threat to their safety despite spotting it in advance.

The succession of devastating accidents in the 1960s cost hundreds of lives. However, they did have one positive aftereffect: they confronted the navy with major deficiencies with its safety culture, and forced it to implement serious reforms to training and upgrades to its equipment, including the installation of flight deck “wash down” systems and employing more stable munitions. While carrier operations remain an inherently dangerous business, there have so far not been any catastrophic accidents on the scale of those that occurred in the 1960s. Tragically, those lessons were paid for in blood before their importance was fully realized.