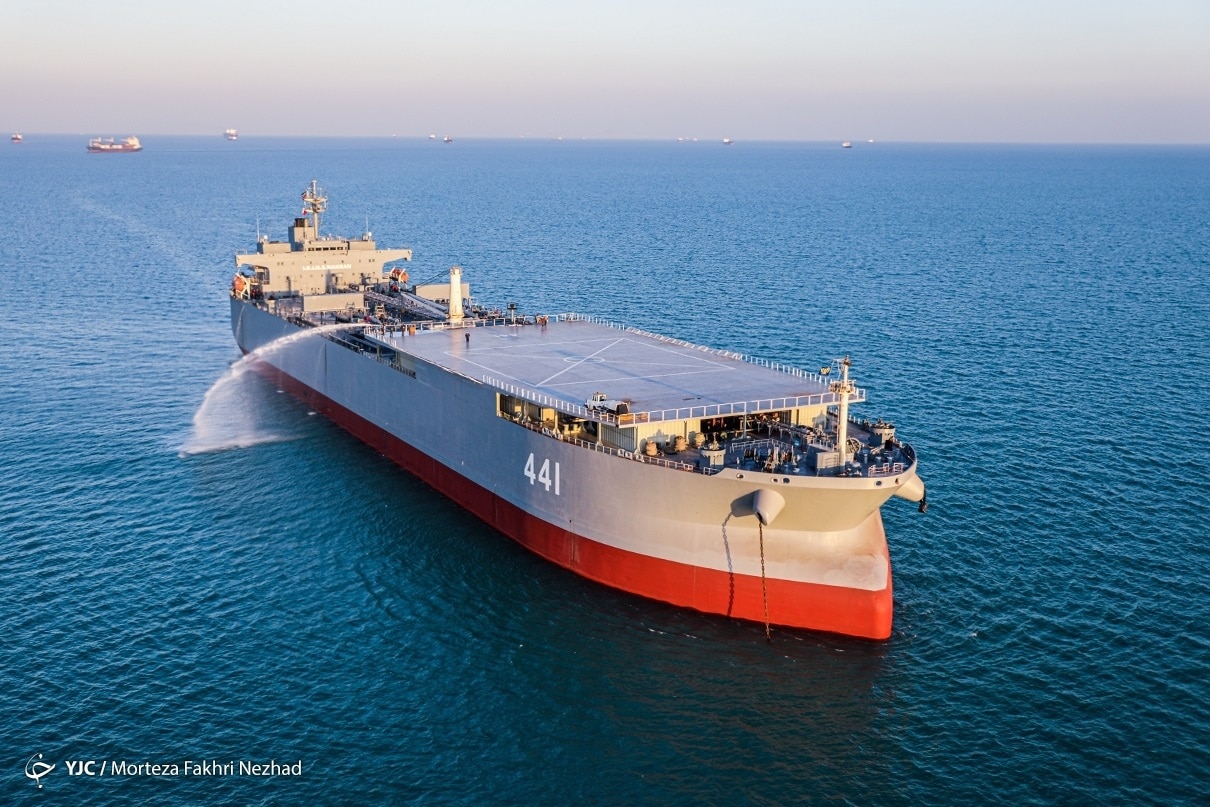 Although the Makran is nominally an Iranian Navy warship, the tanker-turned landing pad may be used instead to transport and offload illicit Iranian petroleum products abroad.

Recent open-source information shows Iran’s largest naval ship, the IRINS Makran, transitioning the Baltic Sea en route to St. Petersburg, Russia to take part in the 325th Russian Navy anniversary. As the ship transited the Horn of Africa, online speculation had suggested that the large ship may have been headed to Venezuela, though those reports proved to be inaccurate.

On the way to St. Petersburg, the Makran passed through the English Channel along with another, escorting Iranian Navy ship. The move drew the interest of NATO countries, as it was possibly one of the few, if not only times an Iranian Navy warship had been in such close proximity to North Atlantic Treaty Organization members before.

In Iran, the Makran is celebrated as the Iranian Navy’s largest warship — but the Makran may not be all that it seems.

Although the Makran is touted by the Iranian Navy as a mobile, expeditionary sea base that can by used as a landing pad for air and naval forces far from Iran’s home waters, the large ship originally set sail as a petroleum cargo ship, and likely retains a large cargo capability — potentially for use as an oil tanker.

While notionally flagged an Iranian Navy warship, the Makran could be used to transport petroleum around the world, sidestepping American sanctions on Iranian oil products by hiding behind the Iranian naval jack. Flagged as an Iranian naval ship rather than a commercial vessel, the Makran would be very unlikely to be seized or boarded, as international law prevents ships flying under naval flags from interdiction at sea.

Iranian ships — commercial vessels rather than warships — have been interdicted at sea before. American authorities apprehended several Iranian oil tankers in 2020 while the ships were en route to Venezuela, laden with refined oil products. Other Iranian tanker ships have also been seized in international waters by several other countries under similar circumstances.

So while this most recent voyage by the Makran is nominally that of a warship and not of a commercial oil vessel, the enormous ship retains the ability to transport vast quantities of petroleum products across the ocean. Flagged as an Iranian Naval ship, there may not be many other countries could do about it either — without raising the possibility of an international dispute.

Considering the Makran’s origin as a converted large capacity oil tanker-turned-warship — it’s not impossible that the ship could be transporting goods in violation of international law. Difficult to prove? Yes. Outside the realm of possibility? Not at all.