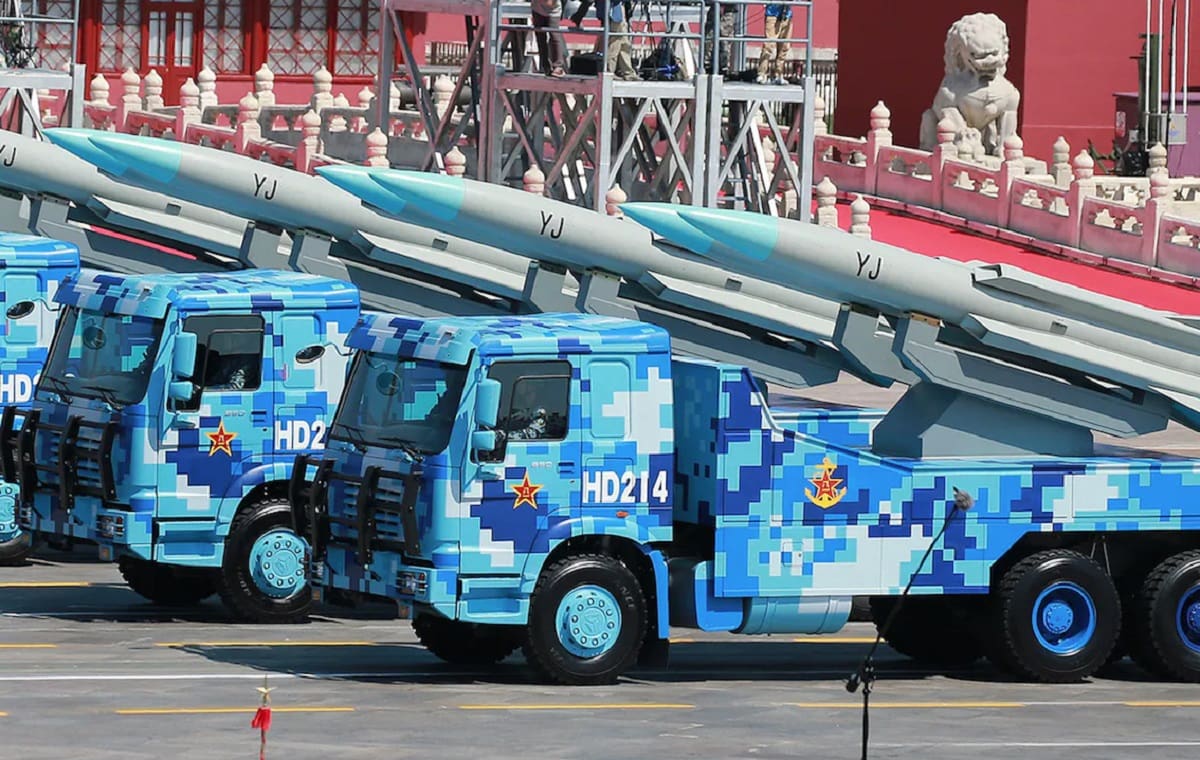 On May 1, 2020, pictures released on social media revealed a curious modification to the Shenzhen, the only Type 051B destroyer built by China. The largest warship in the People’s Liberation Army Navy when she was commissioned in 1999, the 6,700-ton steam-powered destroyer was long ago overtaken by more modern designs.

The photos released in May showed boxy containers installed in a row amidship. Based on the design of the containers, it was clear the venerable destroyer now was packing YJ-12 supersonic cruise missiles, a type once described as “the most dangerous anti-ship missile China has produced thus far.”

However, Shenzhen and the ex-Russian Sovremenny-class destroyer Hangzhou, which mounts only eight YJ-12s, are the only PLA warships currently known to be outfitted with the missile, which is primarily deployed on JH-7 and H-6 maritime strike bombers.

The Shenzhen is a product of the 1990s, an era when the PLA Navy commissioned small runs of experimental ship designs in rapid succession as it sought to narrow its sizable technological deficit with the navies of Japan, Russia and the United States.

Oddly, the Type 051B—also known as the Luhai-class—was a significantly enlarged evolution of two Type 052 Luhu-class destroyers which entered service in 1994. Benefitting from warmer relations between China and the Western world in the 1980s, the Type 052s made extensive use of foreign components. These components included LM2500 gas-turbine engines built by General Electric, U.S. and Italian sonars, and French radars, combat and fire control systems.

However, these systems did not integrate well together, and a U.S Navy delegation invited to inspect a Type 052 noticed that the ships retained the foreign-language labels and documentation. Besides, availability of Western components gradually dried up over the 1990s due to sanctions placed after the massacre of protestors near Tiananmen Square in June 1989.

The naval architects at the 701 Research Institute, therefore, sought to use more indigenously developed systems in the Type 051B. Most notably, this saw the destroyer use two steam turbines for propulsion because sufficiently powerful gas turbine engines weren’t fully developed.

The 051B, which reportedly cost two billion renminbi (in 1995, equivalent to $241 million), was also engineered for modular construction. She was also the first PLAN warships intentionally designed for stealth, with a sloped hull “cleaned” of protruding weapons and antenna to reduce radar cross-section, and devices on the funnels to reduce heat signature.

The Type 051B was laid down in the Dalian shipyards late in December 1995 and launched secretly in October 1997. When she was openly commissioned two years later as the Shenzhen (DD-167) she was then the largest surface warship in the PLA Navy at 153 meters long, with a complement of 230 officers and sailors.

Shenzhen’s original primary armament was sixteen YJ-83 subsonic anti-ship missiles packed into four quadruple launchers. Propelled to 690 miles per hour by a turbojet engine, the sea-skimming YJ-83 has a range of 112 miles and remains widely deployed on PLAN warships and aircraft.

It also boasted the PLA Navy’s first command system for coordinating operations of a naval task force, reportedly with numerous consoles to interface with different types of air and naval forces and transmit and receive encrypted communications.

Like her predecessors, Shenzhen was considered a testbed for new technologies that might be incorporated into newer warships. But the PLA Navy wasn’t satisfied with the Type 051B’s lack of area air defense capability, and furthermore reportedly identified five thousand flaws during constructions and early trials which had to be corrected at cost by the shipyard.

No additional Type 051Bs were built, and it’s even rumored a second hull at an advanced stage of construction was abandoned and later built as a different class of ship.

Still, the Shenzhen served operationally as a flagship in the South Sea Fleet and was prominently deployed on long-distance naval diplomacy missions with port visits in Africa, Europe and the Indian sub-continent, as well as anti-piracy patrols off of Somalia.

The unique vessel received minor armament upgrades in 2004, and the PLAN considered but discarded a scheme to replace her steam propulsion with now-available indigenous gas turbines.

Finally, a 2015–2016 refit at Zhanjiang naval base replaced the Shenzhen’s outdated air defenses with weapons and sensors used in a modern Type 054 frigate. First, the anti-aircraft guns were replaced with two Type 1130 close-in weapons systems (CIWS). These eleven-barreled Gatling cannons, aided by radar and an automated electro-optical fire control system, can spew 180 30-millimeter shells per second to mow down incoming missiles.

Furthermore, the HQ-7 missile launchers were replaced by a vertical launch system loaded with thirty-two HHQ-16 surface-to-air missiles. Based on the Russian Buk system, the HHQ-16’s Mach 3 radar-guided missiles could intercept targets up to twenty-five miles away and at high altitude.

Shenzhen and the YJ-12

The later 2020 refit with YJ-12 missiles, however, reinvented the Shenzhen into a particularly formidable anti-ship platform. The YJ-12, which appears to be an enlarged Russian Kh-31 missile air-to-surface missile, can surge to up two to four times the speed of sound and strike targets up to 250 miles away. It initially closes on the general position of a target using a combination of inertial and Beidou satellite navigation, then switches to active radar to home in for the kill.

Mostly used as an air-launched weapon, the YJ-12A model used by the Shenzhen includes rocket boosters that propel the 6.3-meter-long missile into the air.

The YJ-12’s extreme speeds and ability to perform evasive maneuvers targeted ships very brief windows of opportunity to detect and shoot them down—and it would take only one or two hits to disable or destroy a warship. Thus the Shenzhen’s ability to salvo-fire sixteen of the 2.75-ton missiles is formidable indeed.

However, China’s new mainstay Type 52D destroyers and Type 055 cruisers use a different weapon: the YJ-18 supersonic missile based on the Russian Kalibr/Klub missile. The YJ-18 can fit in vertical launch cells, unlike the YJ-12, and has a longer range of 335 miles. However, its warhead is roughly half the size and it may be slower in the cruise phase of flight.

The Shenzhen’s recent conversion could therefore spring from a desire to operationally test the advantages and downsides of the ship-launched YJ-12. Alternatively, installing deck-based container launchers may simply have been more viable in terms of cost and engineering than carving into the hull to install the multi-purpose vertical-launch systems used with the YJ-18.

If the YJ-12 proves satisfactory on the Shenzhen and Hanghzou, then the PLAN may have found a cost-efficient way to upgrade the anti-ship firepower of its older frigates and destroyers. That’s not bad for a ship type that had production discontinued as soon as it entered service.