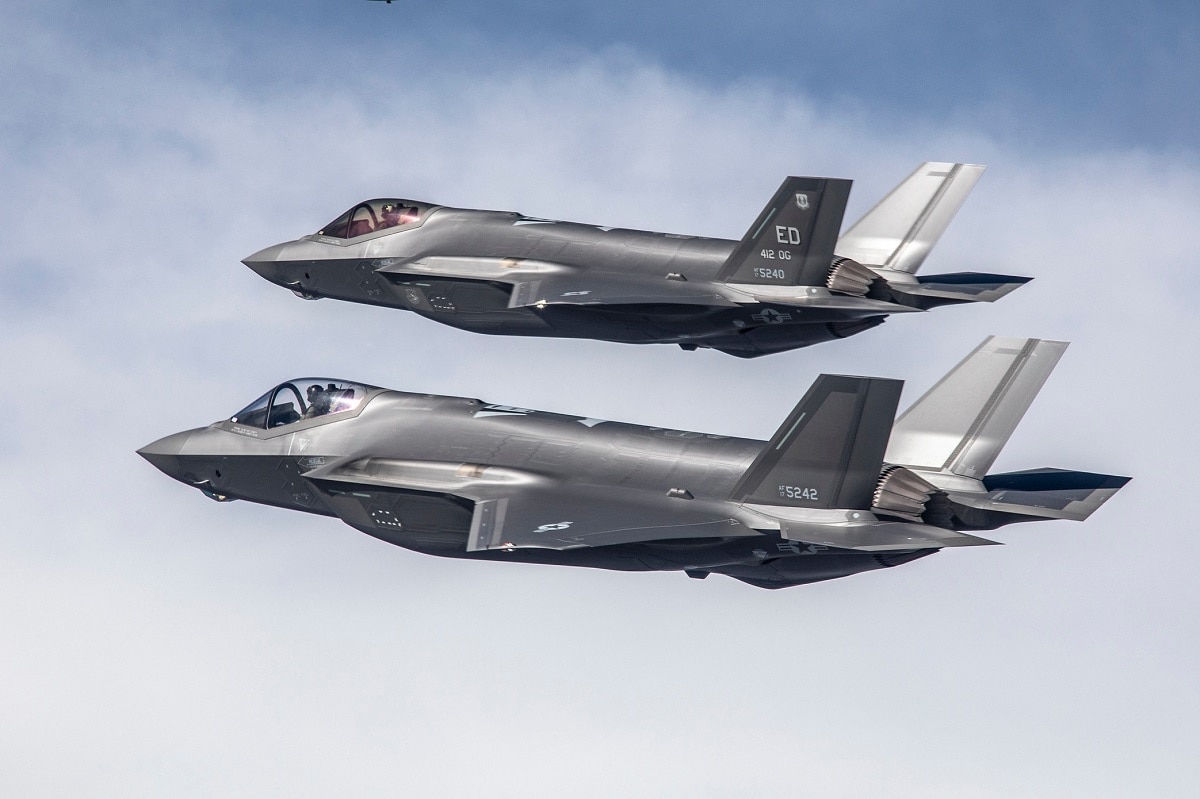 Marauding Polish troops were culpable for fourteen military incidents along the Polish-German frontier eighty years ago. The reluctant German government felt compelled to order the army to respond—and World War II was on. Or at least that’s what Adolf Hitler would have you believe. That day the Nazi dictator informed the Reichstag, or parliament, that he had “resolved to speak to Poland in the same language” that Poland had used armed force for months before the onset of fighting. “This night,” Hitler claimed, “Polish regular soldiers fired on our territory… Since 5:45 A.M. we have been returning the fire, and from now on bombs will be met by bombs.”

In other words, Poland picked a fight and put-upon Germany accepted it. In reality, Hitler had made common cause with a fellow dictator, Josef Stalin, who had previously sought membership in the Axis only to be rebuffed. Instead, the Nazi and Soviet tyrants struck up a non-aggression accord, the Molotov-Ribbentrop Pact, whereby they agreed to partition Poland between Germany and the Soviet Union and award the Baltic states to Moscow as a sphere of interest. On September 1, 1939, Hitler ordered an invasion of a country that had the misfortune to be situated between his Germany and Stalin’s Soviet Union—and blamed the mess on the victims and their Western allies. Say what you like about him, but the Bohemian corporal turned German despot was a master of passive-aggressive diplomacy and military strategy.

Combine charlatanism with ideological fervor, ruthlessness, and high-tech military might and the stage is set for world cataclysm. Especially when feeble resistance from great external powers grants predators leisure to pursue their aims. Could something similar happen eighty years hence? Of course. The authoritarian impulse may have gone into recession after the Cold War, but it never dies. It’s staging a comeback in such precincts as Moscow, Beijing, Pyongyang, and Tehran. Meanwhile, military technology seems to be undergoing a revolution with the advent of directed energy, hypersonics, unmanned vehicles, and artificial intelligence. Nor has pushback against the new authoritarians been especially swift or forceful. This is not September 1939—but the world has not transcended the excesses that culminated in the global war back then.

Let’s not kid ourselves.

How would a new world war resemble and differ from World War II? The nature of strategic competition and war never changes. It is an interactive, impassioned struggle of wills between contestants determined to get their way—by force of arms if necessary. Hitler skillfully played on past grievances, notably the Versailles Treaty that brought World War I to an end. Versailles, he reminded Germans, divided up ethnic German populaces between different countries; it drove a corridor between Germany proper and East Prussia, dismembering the country; it exacted heavy reparations for the Great War; and, most onerously, it required Germans to admit guilt for the bloodletting. He insisted they take up arms once more to recoup lost honor and seize the natural resources they needed to consummate their national quest.

Hence Hitler’s decision to invade his erstwhile non-aggression partner in 1941. So shocked was Stalin at his duplicity that the last train carrying raw materials to the Reich crossed the Soviet border heading westward after the first German troops crossed it heading eastward. Is there no honor among totalitarian despots?

Hitler’s appeal to past slights, real or imagined, ought to ring familiar. Iranians pine to regenerate the golden age of the Persian Empire, when imperial power sprawled so wide that the conquest of Europe seemed within reach. Stand by to receive an earful if you call the Persian Gulf the Arabian Gulf—as the Pentagon insists on doing for some reason—within earshot of an Iranian. Russian President Vladimir Putin once portrayed the Soviet Union’s downfall as “the greatest geopolitical catastrophe” of the twentieth century. Putting together a new Russian-dominated empire would reverse a catastrophe. Chinese Communist president Xi Jinping speaks wistfully of a “Chinese dream.” Fulfilling his dream means regaining every inch of ground once ruled by dynastic China and banishing bad memories of the “century of humiliation” at the hands of imperial powers, thus winning back national dignity and sovereignty.

Could land and glory-hungry authoritarians conclude a standing alliance, an “Axis” of the type that bound Germany, Italy, and Japan to one another back then? Possibly. Few bonds of affection would hold a concert of evildoers together, but they might manage to collaborate for a while until their visions of a new regional or world order came into conflict. Germany and Japan could stand together because they lay on far sides of the world. (They did each other little good for the same reason.) Or, more likely, modern-day heirs of Hitler and Stalin might negotiate some sort of temporary non-aggression treaty, a Molotov-Ribbentrop Pact of their own, in order to get part of what they wanted while postponing conflict between them.

Either way, what are today’s counterparts to Poland—the territories that adjoin both parties and appear susceptible to invasion and partition? There would be few direct candidates if China and Russia struck such a deal. Mongolia would fit the template from a purely geographic standpoint, lying squarely between them. Korea is a half-island grafted onto the East Asian landmass that shares frontiers with both China and the Russian Far East. Kazakhstan lies to China’s west and Russia’s south and once fell under Soviet rule. None of these prospective acquisitions seem especially rewarding as seen from Beijing or Moscow. In fact, if Chinese potentates were to cast covetous eyes northward, their gaze would alight on Russian Siberia as soon as it would Mongolia. Land hunger is land hunger. That would spell trouble for the partnership.

But carry September 1939 logic out into the Pacific Ocean and Japan ought to feel mighty uncomfortable. The Japanese home islands, southwestern islands, and northeastern islands constitute the northern arc of Asia’s “first island chain.” Moscow and Tokyo have unresolved claims to the Kuril Islands to the north. Beijing claims the Japanese-administered Senkaku Islands far to the south, and once in awhile muses about who’s really the rightful sovereign over Okinawa and the Ryukyus chain. If China and Russia could corrode or break the security alliance between Japan and the United States, it’s hardly farfetched to imagine they might wrest islands from a diplomatically and militarily isolated Japan.

Far from it. In fact, a rump, Finlandized Japan would suit both capitals fine. They would levy paybacks for historical abuses at Japanese hands, neutralize a once and (potential) future foe and its erstwhile superpower ally, absorb strategically placed maritime and land territory, and thereby open secure corridors for their navies and merchant fleets into the Western Pacific and back again. They could defy efforts at military containment along the first island chain, which has been a staple of Western strategy since the 1950s. In other words, Japanese leaders ought not to sleep too soundly lest they suffer a partial Polish fate. For their part, American leaders should ponder whether they’re playing the part of British and French statesmen of the 1930s—leaders who thought they could appease Hitler, satisfying his insatiable lust for land, status, and vengeance.

That Moscow and Beijing would someday fall out—and in all likelihood fall upon each other for future spoils—would come as cold comfort to a Japan denuded of outlying territory, or an America evicted from the Western Pacific.

Bottom line, there’s a whiff of the 1930s in the air in East Asia today. But if the nature of geopolitical struggle never changes, the character of individual struggles is forever changing. How might warmaking technology and methods devised since the days of Hitler and Stalin shape the course of a future war? Start with the obvious: this is the nuclear and missile age, whereas atomic weapons and guided missiles lay years in the future when Hitler ordered the German Army into Poland. The situation in Japan today differs markedly from that of Poland, and not just in geographic terms. Nuclear-armed forces are resident in Japan—namely allied U.S. forces. One wonders whether Hitler would have greenlighted a cross-border thrust in September 1939 had British or French troops brandishing doomsday weaponry been stationed on Polish soil.

Isolating Japan from American support and discouraging Japan from developing its own nuclear deterrent, then, would be necessary precursors to any Russo-Chinese move against the island state. All the more reason to keep the U.S.-Japanese alliance sound. Keep transpacific ties strong and nuclear deterrence may hold. But what about exotic non-nuclear technologies and tactics now entering service? If, as the University of Sydney’s United States Studies Center warns, China’s People’s Liberation Army rocketeers and aviators could incapacitate allied bases and pound allied forces within a short time, and if the Russian Navy and Air Force opened a northerly axis of attack on the island state to further disperse and weaken the defenders, then Beijing and Moscow might gain sufficient time to accomplish their goals. They might pull it off before U.S. forces could make their way across the Pacific, under fire, to reverse aggression.

Such a feat might compel Washington to undo a done deal at frightful cost and hazard. Best of all, from Moscow’s and Beijing’s standpoint, Russo-Chinese forces might do it all without breaching the nuclear threshold. Am I predicting a repeat of September 1939? Not a bit. The Western powers failed to take Hitler seriously for far too long. They afforded Germany time to rearm and launch aggressive moves against the Rhineland, Czechoslovakia, and ultimately Poland. The hour is late—but not that late. So long as we take today’s authoritarians seriously, try to glimpse what they may do, and fashion forces and counterstrategies of our own, we can compete to good effect.

And for that, in part, we will have a murderous Bohemian corporal to thank. There’s historical irony for you.

James Holmes is J. C. Wylie Chair of Maritime Strategy at the Naval War College. The views expressed here are the author’s own.