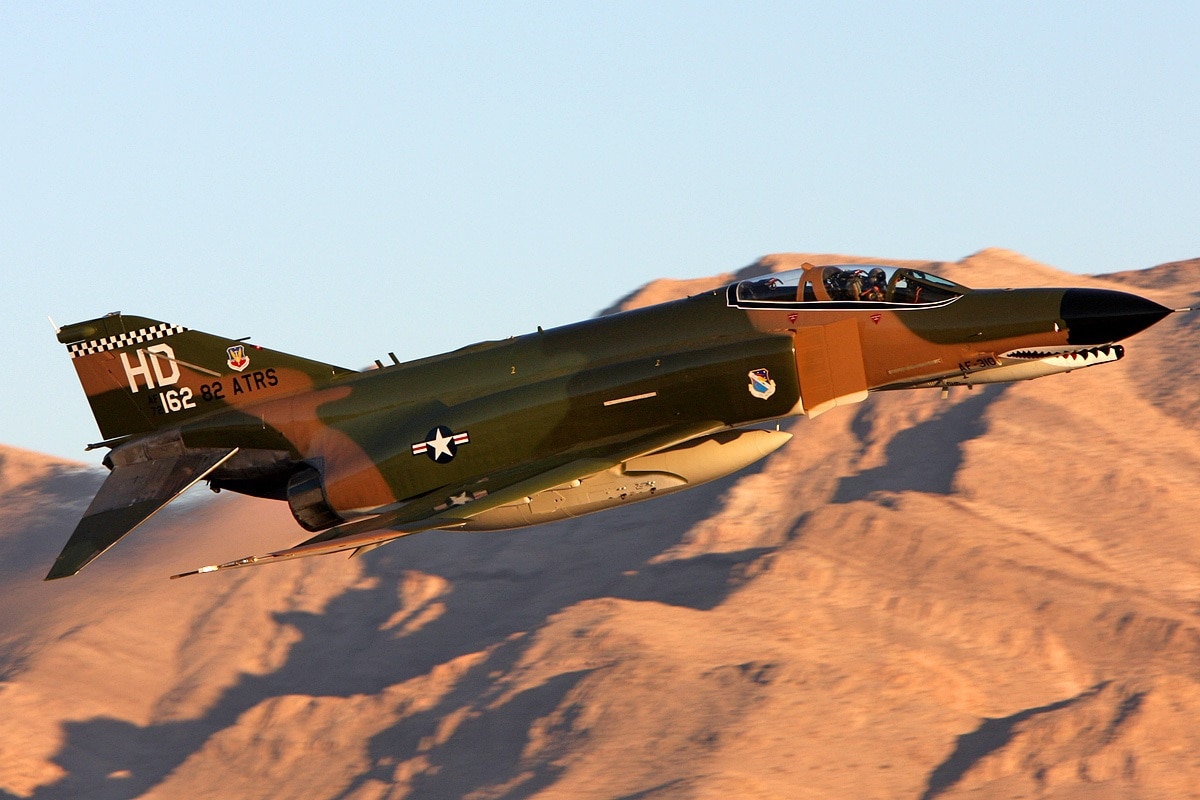 In 2018 reports emerged that the Pentagon would seek to procure a dozen upgraded F-15X fighters to replace an aging fleet of F-15C air superiority fighters. Rightly or wrongly, advocates of the F-35 stealth fighter fear the F-15X might impact F-35 procurement, even though the F-35 wasn’t meant to replace the F-15C. This is far from the first time that manufacturers of new jet fighter designs have opposed pursuing upgrades of older models already in service.

The F-4 Phantom was a beast of a two-seat jet fighter that could fly over twice the speed of sound and carry a heavier bomb load than a four-engine B-17 bomber from World War II. The advanced radar-equipped jet entered service with the Air Force, Navy and Marines in the 1960s designed to engage enemy fighters at beyond visual range with air-to-air missiles.

However, designs flaws and circumstances both initially conspired against the Phantom in its first major combat test in the Vietnam War. It turned out early air-to-air missiles remained highly unreliable and the rules of engagement required U.S. pilots make visual contact before firing. Furthermore, the Phantom was less maneuverable than opposing MiGs and U.S. pilots weren’t trained to fight within visual range. As if that weren’t enough, the Phantom also lacked a gun!

Many of the Phantom’s flaws were corrected, though. A 20-millimeter Vulcan cannon was added in the F-4E model and missile technology improved significantly. Moreover, Phantom pilots were trained on Air Combat Maneuver theory, and special wing slats were added that traded away some of the Phantom’s considerable speed for greatly improved maneuverability. In addition to scoring a better than 3:1 kill ratio over Vietnam (150 kills for 41 losses in air-to-air combat), Phantoms chalked up a distinguished combat record abroad in the Iran-Iraq war and Arab-Israeli conflicts, shooting down roughly one-hundred-fifty more aircraft and taking out deadly surface-to-air missile batteries.

However, many of these technologies could be retrofitted to the Phantom. In the 1980s, Israel Aerospace Industries (IAI) planned a three-part modernization of the Phantom called the Kurnass (“Heavy Hammer”). The first phase of these upgrades included new radars, heads-up-displays, cockpit instrumentation, and standoff missile capability. But IAI also considered a more ambitious upgrade in conjunction with its a domestic light fighter project called the Lavi (“Lion.”)

In 1980, IAI selected engine manufacturer Pratt & Whitney to develop a smaller variant of the F100 turbofan powering the F-15 for use in the Lavi. The resulting PW1120 turbofan was significantly smaller and shorter than the F100 but generated nearly as much thrust and had 70 percent interchangeable parts.

In 1983, Boeing and Pratt & Whitney proposed a “Super Phantom” upgrade powered by the PW1120, which was vastly more fuel-efficient and produced roughly 30 percent more thrust than the Phantom’s smoky 50s-era J79 turbojets. The Boeing Super Phantom would also have come with aerodynamic conformal fuel tanks that nearly doubled range while inducing less drag than wing-mounted drop tanks. However, the Air Force cut funding for the project in 1984.

Later in July 986, as IAI proceeded with development of the Lavi, it modified F-4E Phantom #336 to serve as test-bed, replacing its starboard J79 engine with a PW1120—possibly with assistance from Boeing. Less then a year later, the port engine was replaced as well, and the fully re-engined Phantom made its first flight on April 27, 1987.

By all accounts, the up-engined Phantom’s performance was extraordinary, boosting the F-4E’s thrust-to-weight ratio from .86 to 1.04. (A jet with a thrust-to-weight ratio exceeding of 1.0 or higher can fly straight up at a 90-degree angle and still accelerate.) As a result, the Super Phantom could climb 36 percent faster and sustain turns 15 percent faster which combined with wing slates. This put it on par with the fourth-generation F-15E Strike Eagle and could accelerate 27 percent faster, and take off with 20 percent less runway. Due to the engines’ lighter weight and greater fuel efficiency, the Super Phantom could also fly considerably further.

Most remarkably, the Super Phantom could supercruise, meaning it could sustain flight above the speed of sound without using fuel-gulping afterburners. Even today, the United States has only one operational super-cruising fighter, the F-22 Raptor.

A few months later in the 1987 Paris Air Show, veteran pilot Adi Benaya took the Super Phantom (given show number #229) out for a spin in an impressive performance, which you can see here and here. Donald Fink wrote for Aviation Week that it amounted to a “startling display of brute power in a series of vertical maneuvers and tight, high-g turns that were totally out of character for the aging F-4.”

The Super Phantom’s airshow debut created the impression IAI intended to implement the PW1120 upgrade and market it abroad. However, the super-cruising Super Phantom was not to be—and the reasons why remain controversial.

Some sources claim that Super Phantom upgrade was simply too expensive, totaling $12 million per aircraft when bundled with improved avionics of the Kurnass, as well as proposed airframe modifications including strakes, canards and special fuel tanks. One should also bear in mind that Israeli Phantoms were already well into their airframe service lives.

Furthermore, two months later the Lavi fighter was canceled, partly due to pressure from the United States not to create competition for its fourth-generation fighters. As the PW1120 turbofan was not used by other aircraft, this would surely have raised the unit cost of procuring them for Phantoms.

However, it is also rumored that the Phantom’s original manufacturer, McDonnell-Douglas, may have intervened to prevent IAI Super Phantoms from interfering with foreign sales of its new F FA-18C/D Hornet. Combining the upgraded engines and modernized avionics, the Super Phantom would have equaled or exceeded the $29 million FA-18C Hornet on several performance parameters. And hundreds of Phantoms were in service in Germany, Greece, Japan, Israel, South Korea, Spain, Turkey and the United Kingdom.

Thus, legend has it that McDonnell-Douglas quietly withheld authorization for the PW1120-powered Super Phantom to prevent IAI from marketing a cost-effective competitor to its newer fighters. However, though the rumor appears widely-held, confirmation from primary sources is not in evidence.

The IAF did proceed with avionics upgrades to 55 Kurnass Phantoms, including a combined throttle/joystick, an APG-76 Doppler radar, and support for Popeye ground-attack missiles. While the Kurnass Phantoms were retired in 2004, IAI implemented a similar upgrade or Turkish Air Force F-4s dubbed the Terminator 2020. These have seen extensive action over Syria.

Japan will retire its license-built F-4EJ Phantom fleet, leaving Greece, Iran, South Korea, and Turkey to fly upgraded Phantoms into the 2020s—but not the super-cruising Phantoms that could have been.