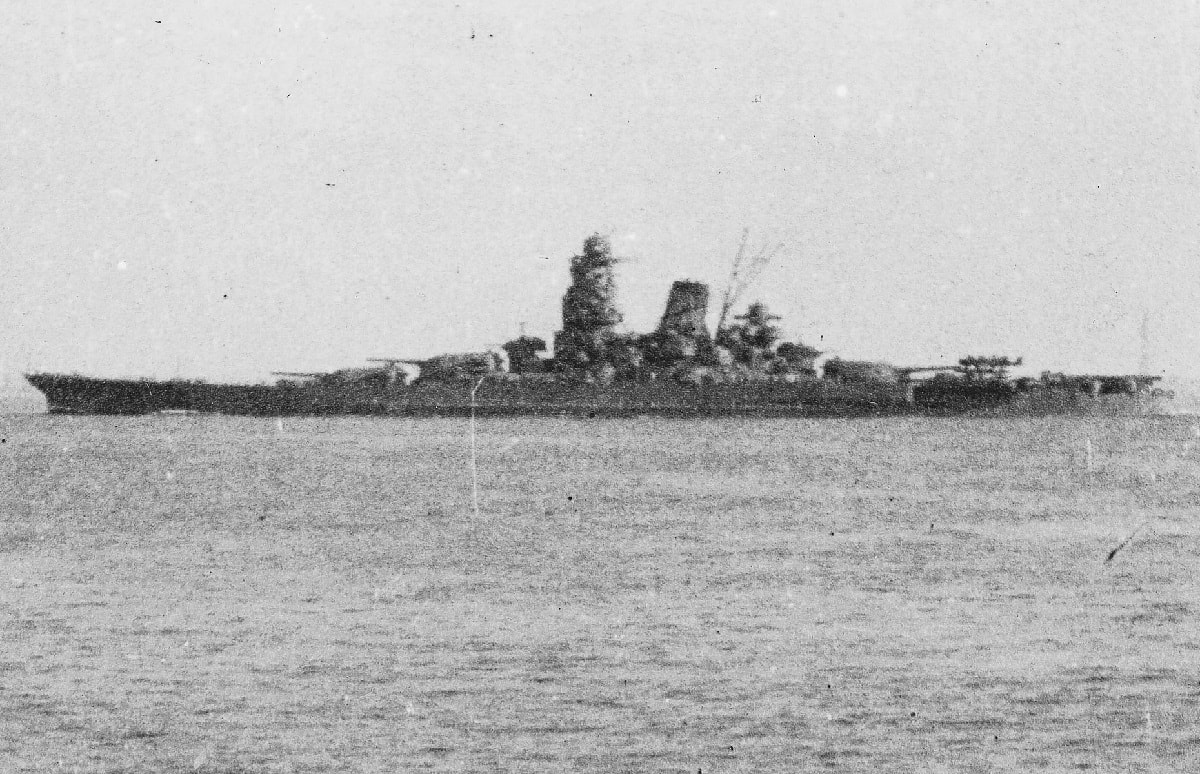 Japan withdrew from the London Naval Treaty in 1936. The chief Japanese negotiator, Adm. Isoroku Yamamoto, feared that concessions on the part of his negotiating team would lead directly to his assassination upon return to Japan. Japanese nationalists believed that the Washington Naval Treaty system was holding Japan back and preventing it from becoming a first-rate power. Freed from the constraints of international treaties, they believed that Japan could build a world-beating fleet that would push the Western powers out of Asia and help usher in a new era of Japanese dominance.

Musashi was the second ship of the Yamato class, the first of this new generation of battleships. The Imperial Japanese Navy believed that the United States would never build battleships too large to move through the Panama Canal, and calculated that the maximum displacement of such ships would amount to about sixty thousand tons. Ships of that size could not, it was thought, carry guns larger than sixteen inches. The IJN’s engineering problem was thus to design and build battleships that could destroy the largest ships the Americans were likely to build. The Japanese ships were to have a speed of at least thirty knots, carry eighteen-inch or larger guns, and have a long range with good fuel economy. With three triple 18.1-inch gun turrets, the Yamato class met one of the three conditions. Initially designed with diesel engines for economical cruising, problems with the diesels led to the use of a standard, fuel-intensive power plant. A well-armored thirty-one-knot version was rejected as too large (the Yamatos displaced sixty-five thousand tons), and the IJN unwisely decided to sacrifice speed for armor, settling on twenty-seven knots. As it was, its armor weighed more than an entire World War I dreadnought, and could absorb enormous damage. Musashi and its sister were immensely powerful ships, but the sacrifice of operational mobility for surface tactical effectiveness would limit the impact that they would have on the war.

The IJN ordered five ships of the Yamato class, but only Musashi and its elder sister were completed as intended. Shinano, the third sister, was completed as an aircraft carrier support vessel. Japan took elaborate precautions to prevent details of the ships’ construction from reaching the United States. Indeed, the United States only acquired good intelligence as to the size and armament of the battleships in 1944. When Japan surrendered, the IJN attempted to destroy all photographic and technical data on Yamato and Musashi, leaving Western analysts guessing as to its exact characteristics well into the Cold War.

Named after an ancient province on Honshu, Musashi was laid down in March 1938, and commissioned in August 1942. It arrived in Truk in January 1943, and became Admiral Yamamoto’s flagship in February. Because of its speed and enormous fuel requirements, the IJN had not used Yamato in the Guadalcanal campaign, and was similarly reticent about Musashi. While Japanese caution in context of oil shortages is understandable, the course of the war in 1942 and 1943 demanded a more risk-acceptant posture; this was not a time at which the IJN should have emphasized fuel economy. Musashi sortied three times in efforts to intercept U.S. naval movements, but never engaged the enemy. In February 1944 it was withdrawn from Truk out of concerns over U.S. carrier raids. In March, it received light damage from a U.S. submarine attack.

Musashi served at both the battles of Philippine Sea and Leyte Gulf. At the latter it, Yamato, and three other battleships served as the core of Adm. Takeo Kurita’s strike force, intended to destroy U.S. landing craft off Leyte. Before that could happen, however, Kurita’s task force needed to run a gauntlet of submarine and carrier aircraft attacks. During the latter, Musashi became the focus of U.S. naval aviators. Despite withering antiaircraft fire, it received enormous punishment from American pilots. Over five hours of attacks, Musashi took nearly twenty bomb and torpedo hits each, slowing its speed and causing extensive flooding. No other battleship could have survived half that, but eventually the flooding got the best of damage control crews, and at 19:36 on October 24, 1944, Musashi rolled over and sank. Nearly a thousand of its 2,400-man crew sank with it.

Its loss was in vain; although an elaborate sacrifice of carriers decoyed American battleships away from Leyte, Kurita’s attack on U.S. transports and escort carriers was foiled by the extraordinary courage of a few American destroyer captains. In 2015, Paul Allen, cofounder of Microsoft and owner of the Seattle Seahawks and Portland Trailblazers, led a team of researchers who discovered Musashi’s wreck. It lies in several pieces at the bottom of Sibuyan Sea.

Over the years, a variety of reports of turned up on the expected successor classes to Yamato. The next iteration would have been slightly larger, slightly more heavily armored, and would have carried six twenty-inch guns in three twin turrets, probably with roughly the same speed and range as Yamato. Designs for these ships were finalized, but wartime demands meant that they were never laid down. Indeed, the effort that went into Musashi’s construction would better have been spent on aircraft carriers and other ships. Expectations of a further follow-on class, with a speed above thirty knots and four twin twenty-inch guns, have emerged over the years, although the construction of such ships would have been purely notional.

The Yamatos were the zenith of the Japanese battleship aesthetic, with a beautiful swept-back pagoda mast that managed to convey speed, grace and power. This, undoubtedly, is one of the reasons why the ships have continued to hold a place in the public imagination, even seventy years on. However, Musashi has never earned the popular cultural attention of its sister, HIJMS Yamato. The latter took the starring role in the animated television show (and later film) Space Battleship Yamato, known in the United States as Star Blazers. Yamato also served as the subject of a live-action film in 2005.

Robert Farley  is author of The Battleship Book. He serves as a Senior Lecturer at the Patterson School of Diplomacy and International Commerce at the University of Kentucky. His work includes military doctrine, national security, and maritime affairs. He blogs at Lawyers, Guns and Money and Information Dissemination and The Diplomat.