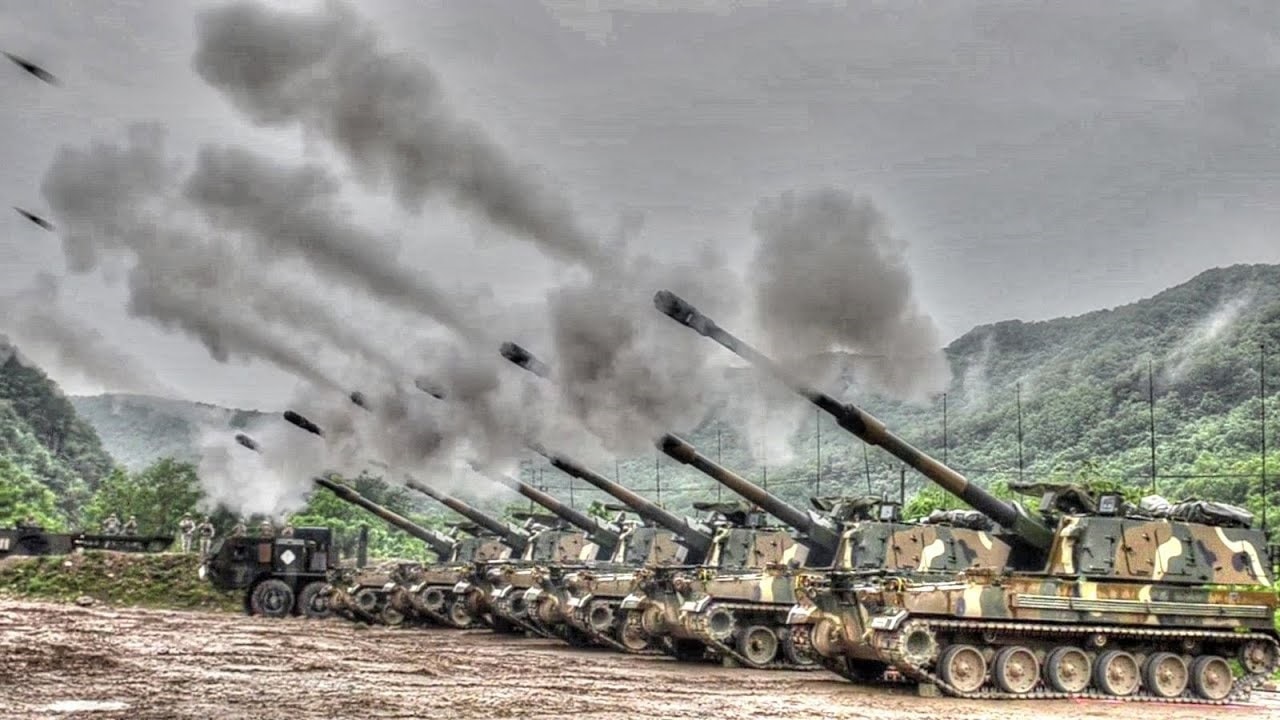 In December 2017, Norway announced it would purchase twenty-four K9 Thunder self-propelled howitzers from South Korean firm Hanhwa for $215 million, with an option for up to twenty-four more in the future. The K9 edged out an upgraded M109 howitzer offered by the Swiss firm RUAG and the German Panzerhaubitze 2000, which has a similar main gun and performance profile, but a slightly faster rapid-fire rate compared to the K9. However, the PzH 2000 is considerably more expensive.

This marks just the latest success of the South Korean howitzer system, which is already serving with Turkey and will soon enter service with three other NATO countries, as well as India and Finland. South Korea itself has more than 1,200 of these guns deployed to face down their intimidating North Korean counterparts along the mountainous demilitarized zones that separate the two states.

The turret on the fifty-two-ton K9 mounts a huge 155-millimeter howitzer with a long fifty-two-caliber barrel that can strike targets up to twenty-six miles away—or as far as thirty-five miles using rocket-assisted projectiles. The vehicle’s five-man crew is fully enclosed with protection from ambient nuclear, biological and chemical hazards, and protected by nineteen millimeters of steel armor—just enough to deflect heavy machine-gun rounds and shrapnel, but not anything heavier. A .50 caliber machine gun on the turret offers a modicum of air- and close-defense capability.

South Korea designed the K9 to operate on the rugged mountains of the demilitarized zone with North Korea, and accordingly gave it advanced hydropneumatics suspension to overcome the rocky terrain. Despite weighing more than the U.S.-built M109 Paladin, which has been in widespread use across the globe since the 1960s, the K9 is faster (at forty-one miles per hour), has a higher power-to-weight ratio thanks to its thousand-horsepower engine, and has a nearly 40 percent greater operational range of three hundred miles before requiring refueling. While the gun isn’t stable enough to be fired on the move, it can be deployed for firing in just one minute.

The gun uses an automatic feed mechanism to reduce the burden on the two loaders in the crew. It is capable of rapid-firing three rounds in just fifteen seconds using its Multiple-Round Simultaneous Impact mode, allowing a modernized version of a World War II tactic known as Time on Target. Operational research has shown that artillery is deadliest during the opening moments of barrage, when the targets are likely out in the open and unaware of the incoming attack, then declines steeply in effectiveness as adversaries hunker down into cover. By timing the shells in an opening salvo to land simultaneously before the enemy is aware they are incoming, they are likely to inflict far greater damage.

The Thunder can carry up to forty-eight shells, and is resupplied by K10 ammunition resupply vehicles, which can transfer up to 104 more rounds via an automated bridge that does not require the crew to expose themselves to fire. The K10 uses the same hull as the K9 for maintenance commonality.

The K9 actually first saw action with the Turkish army, in the form of a license-built variant called the T155 Firtina (“Storm”). The Firtinas were first employed in a cross-border incursion targeting Iraqi Kurdish PKK forces in 2007, and later were heavily engaged in attacks on Kurdish and ISIS forces across Turkey’s border with Syria. However, ISIS fighters filmed themselves knocking out three Firtinas at Gaziantep using Metis wire-guided antitank missiles in April 2016. Turkey currently possesses at least three hundred T155s, and has exported thirty-six to Azerbaijan, where they may see use in its on-and-off again war with Armenia.

South Korea’s K9s saw their own baptism by fire under less than auspicious circumstances on the afternoon of November 23, 2010, at Yeonpyeong Island, at the extreme western tip of the North-South border. Apparently feeling provoked by a South Korean naval exercise earlier in the morning, North Korean artillery based in the Kaemori Peninsula and on the tiny island of Mudo began an indiscriminate hour-long bombardment of Yeonpyeong Island, killing two civilians and two Korean marines, and wounding twenty-two more.

The battery of six Thunders located on the island eventually responded, but two had their fire-control systems damaged by the attack and could not fire, while a third was temporarily jammed but was brought into action. The active K9s fired eighty shells targeting the barracks on Mudo Island. Because the howitzers had exhausted most of their onboard ammunition during an earlier exercise, Korean Marines were soon forced to manually reload them. South Korean intelligence estimated the counterbattery fire resulted in thirty-five to forty killed or wounded, while North Korea denied sustaining any losses.

The Korean DMZ bears the risk of erupting into an intense artillery war, and South Korea is currently working on producing a new version of the K9 with an automatic turret, reducing the crew size to only two.

Countries in northern and eastern Europe are also seeking to improve their artillery capabilities due to Russia’s more aggressive posture in the region. Even Estonia, with its tiny population of 1.2 million, is planning to acquire twelve Thunders to increase the costs of a hypothetical Russian invasion. Poland, meanwhile, is even building a domestic version of the K9 called the AHS Krab, which uses the turret of a British AS90M Braveheart howitzer. Warsaw plans to have five regiments totaling 120 Krabs, of which one is already operational. Further north, Finland announced in February 2017 that it was acquiring forty-eight used Thunders.

And far away in India, one hundred K9 VAJRA-Ts optimized for desert environments will be domestically manufactured with an option for fifty more, replacing outdated and smaller-caliber Abbot and 2S1 self-propelled howitzers. The VAJRAs are the first modern addition to India’s undersized self-propelled artillery force.

The U.S. military has placed decreasing importance on artillery until recently, as armored howitzer systems are heavy and difficult to deploy and resupply across the globe into an active theater. But for countries facing potential adversaries on their borders, artillery can respond much more rapidly, sustainably and cheaply than airpower. Improvements in technology now allow greater range and accuracy than before. This, combined with relatively affordable price, may explain why the advanced Korean howitzer is experiencing a surge in popularity.