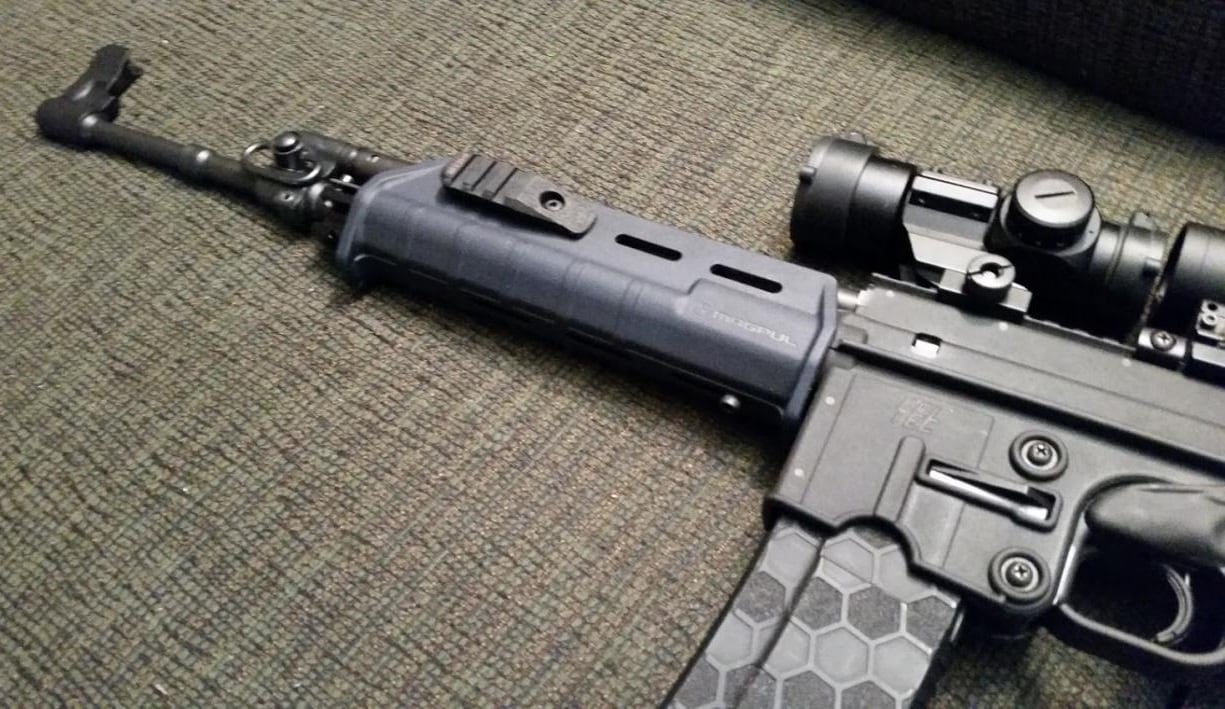 Designed to compete with budget AR-15, the rifle features a highly similar layout to the AR, but an AK-like operating system that uses a long-stroke gas piston and a charging handle integrated on the bolt carrier group. The recoil spring is placed in front of the bolt carrier group on the gas piston itself, which allows the rifle to fold to be more compact. But are these design changes actually an improvement?

In short, no. While placing the recoil spring on the gas piston itself may seem like a good idea to shorten the rifle, it means that if the piston or its connection to the bolt carrier breaks in some way at any point along its length during the recoil stroke, the bolt carrier risks being shot back into the rear of the receiver with nothing slowing it down, possibly cracking the receiver and injuring the user. While Kel-tec made some changes to the design, such as staking the operating rod in the carrier, to fix this issue, it’s notable that in their next design, the RDB, they moved the recoil spring back behind the bolt carrier group as in almost every other military firearm.

Even under normal recoil, the SU-16 has issues with the bolt contacting the rear of the polymer receiver. While official statements suggest that the polymer the SU-16’s receiver is made of can take this abuse, most military rifles will include a rubber buffer at the rear of the receiver to dampen the shock on their metal receivers. There have been some reports of SU-16 receivers cracking at the rear due to these impacts, but these are largely individual issues and some SU-16s have run for thousands of rounds without this occurring.

The SU-16 also has many other questionable features. Similar to the Steyr Scout, it features a split handguard that can be folded down to act as a primitive bipod. However, unlike the Scout, when done so the barrel is completely exposed, requiring the handguard to be folded up again to be used normally.

The plastic and proprietary nature of the furniture means that upgrading the SU-16 isn’t easy. It also means replacement parts are more expensive and require sourcing from Kel-tec if they break. Comparatively, spare parts for an AR-style rifle are abundant.

Reloads and recoil are also worse on the SU-16 compared to a standard AR. While the rifle is marketed as a “utility” rifle rather than a tactical one, the simple “pull the charging handle to release” on the SU-16 slows down reloads compared to the AR. Likewise, the long-stroke piston gas system produces a more significant recoil impulse compared to most ARs on sensible gas settings.

Some may say the point of the SU-16 lies in being a “ban state” rifle, as the lack of a buffer tube means it can be configured with a traditional rifle grip-stock. But this concept has been done better by other designs. FightLite (formerly Ares Defense) makes the SCR, a rifle that features an AR-style lower receiver with a traditional rifle grip-stock that can take any standard AR-15 upper receiver. The standard AR controls and operating system are retained. As such, the SCR has lower recoil and is more ergonomic than the SU-16, while also taking a far greater range of accessories.

The SU-16 is an interesting design, but it fails to do anything better than most of its competitors. When priced at around $600, it compares poorly to entry-level ARs at the same price point. If one lives in a “ban state,” the SCR costs more, but bring a lot more customizability and practicality to the table versus the SU-16.