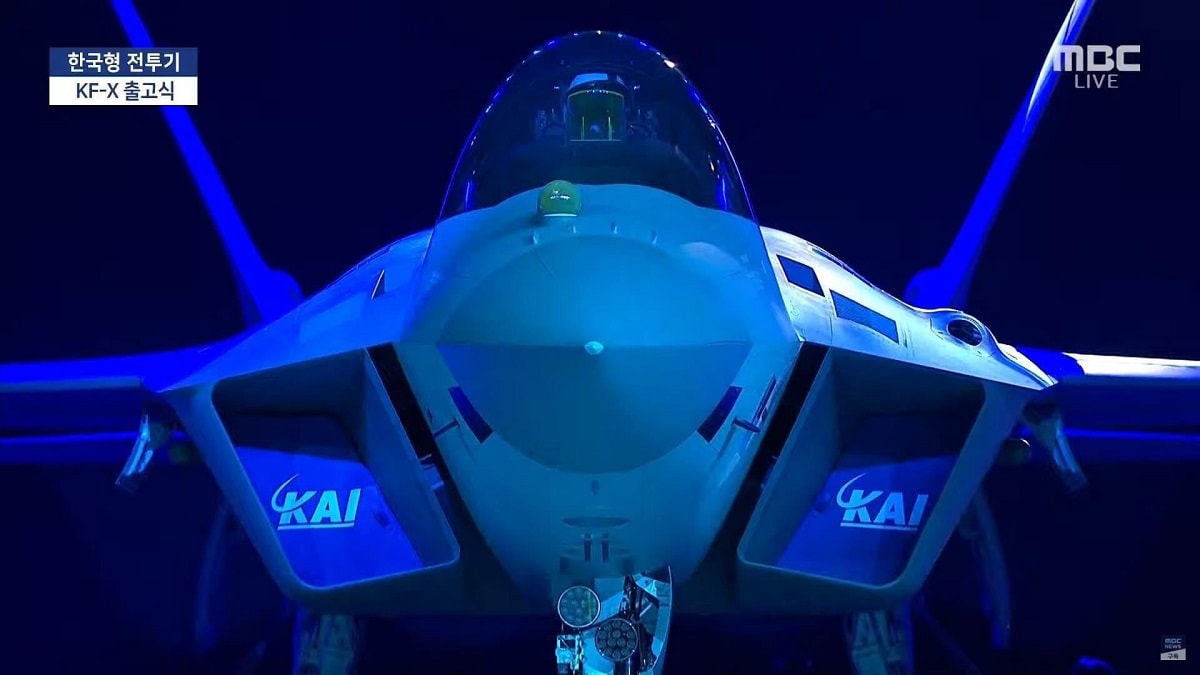 In a ceremony on April 9 attended by President Moon Jae-in, Korean Aerospace Industries (KAI) unveiled the prototype of an advanced new indigenous KF-21 Boramae (“Hunting Hawk”) jet fighter at a facility in Sacheon.

The twin-engine KF-21 bears more than a passing resemblance to the U.S. stealth fighters, but the Boramae as it stands is a 4.5-generation multi-role fighter in a similar class to the Dassault Rafale and Eurofighter Typhoon. Its radar cross-section, claimed to be down to 1-.1 square meters, is much stealthier than that of an F-16 or other early fourth-generation designs, but still many times larger than that of an F-35 stealth fighter jet.

That’s not to discount significant efforts to reduce the KF-21’s radar visibility through the geometry of its airframe, serpentine engine ducts, and use of radar-absorbent materials (RAM). But a sticking point for the KF-21 is its externally carried weaponry.

In fact, if the KF-21 is successful, the concept is to move on to a stealth-optimized Block 3 model with an internal weapons bay. The KF-21’s underbelly weapon hardpoints are already semi-recessed into the fuselage to reduce the protruding missile’s prominence. As shown by factory floor images, the fuselage appears to have been engineered with enough space to eventually remodel the design with an internal weapons bay.

Thus the KF-21 may have the potential to evolve into a “true” stealth aircraft in later iterations—though the cost-efficiency of this approach has its skeptics.

The Boramae is billed as having a maximum speed of Mach 1.83 and a ferry range of eighteen hundred miles. Weapons are mounted on six underwing and four under-fuselage hardpoints, with a maximum payload of seventeen thousand pounds. A bulge above the left engine appears to be for a conformal 20-millimeter Vulcan cannon mount.

It is unclear if the KF-21 will meet the earlier stipulated requirements for supercruise (sustaining supersonic speed without use of afterburners) or the program’s target combat radius of five hundred miles (round-trip range loaded with weapons and fuel to spare for combat maneuvers). However, the forty-four thousand pounds of thrust produced by its F414 turbofans matches impressively with the gross weight (ie. fully fueled) of about thirty-eight thousand pounds, implying an excellent thrust-to-weight ratio of 1.157. A high-thrust to weight ratio equates to superior acceleration and maneuverability.

A South Korea defense research official told Defense News the KF-21 will cost half as much to operate per flight hour as the F-35 jet that Seoul is acquiring. (For what it’s worth U.S. F-35A operating costs are currently pegged at $36,000 per flight hour.) However, the new design will likely cost more to fly than the F-5 jets it is replacing, and the total fleet size of the ROKAF seems set to shrink.

Currently, the plan is for four single-seat KF-21s and two two-seat prototypes to begin flight testing in 2022, while another two prototypes serve purely for ground-testing. If all goes according to plan, then a production contract will be awarded in 2024 with deliveries beginning two years later.

The first 40 KF-21 Block 1s (equipped mostly/only for air-to-air combat) will enter service by 2028, with the remaining eighty air-to-ground capable Block 2 jets to follow by 2032.

Indonesia also is a partner to the KF-X program. Jakarta agreed to undertake 20 percent of the development costs in exchange for an order of fifty KF-21s and technology transfers but has fallen far behind on payments for its financial contribution. Recently, it has sought to renegotiate the deal, with its cost-share already decreased to 18.8 percent. Defense Minister Prabowo Subianto’s presence at the ceremony in Sacheon is a sign Jakarta and Seoul still hope to keep the collaboration afloat.

Thus the KF-21 is aimed less at achieving an overmatch against North Korea—that is already secured—and instead about building up South Korea as a major military aerospace power. That would allow Seoul to lessen its longstanding dependence on the U.S. and export warplanes to a wider range of clients.

The KF-21’s guided weapons are also of U.S. or European origin. For air-to-air warfare, the KF-21 will mount speedy Meteor beyond-visual-range radar-guided missiles and German IRIS-T short-range heat-seeking weapons. KAI is expected to seek integration of U.S.-equivalent AIM-120 and AIM-9X missiles too.

For air-to-ground attack, the KF-21 will integrate the GBU-12 Paveway III and GBU-54 laser-guided bombs; GPS-guided bombs JDAMs and Small Diameter Bombs; and CBU-105 cluster bombs. For standoff-range attacks, the jet will mount HARM missiles designed to home in on hostile radars, and either Swedish-German bunker-busting Taurus KEPD-350 cruise missiles or a smaller indigenous stealth cruise missile, though the latter could take many years to develop.

Hanhwa’s development of an Active Electronically Scanned Array radar is especially noteworthy as AESAs are coveted in fighters for their discretion, resistance to jamming and ability to maintain many simultaneous air and ground tracks.

The Korean AESA, which has already been tested on a 737 airframe, has 1088 transmitter-receiver elements with plans to increase to 1200-1300, compared to the 1200 on an F-35 jet’s radar. That said, developing software enabling the KF-21’s computer to use the input from the radar may prove challenging.

KAI first began assembling the technical know-how for jet fighter production in the 1990s with license-built F-16s (or KF-16s) and production of 40 percent of the parts for its F-15K Slam Eagles jets. KAI then used F-16 technology in a partnership with Lockheed to develop and produce the Golden Eagle family of advanced trainer/light fighters. In addition to serving in the ROKAF, the cut-price Golden Eagle attracted export orders and has seen significant combat use by the Philippines Air Force.

KAI hopes to begin exporting the KF-21 in 2028, particularly to customers that have already bought the Golden Eagle, namely Iraq, The Philippines and Thailand. KAI also sees Malaysia, Peru, Qatar and Senegal as potential clients. 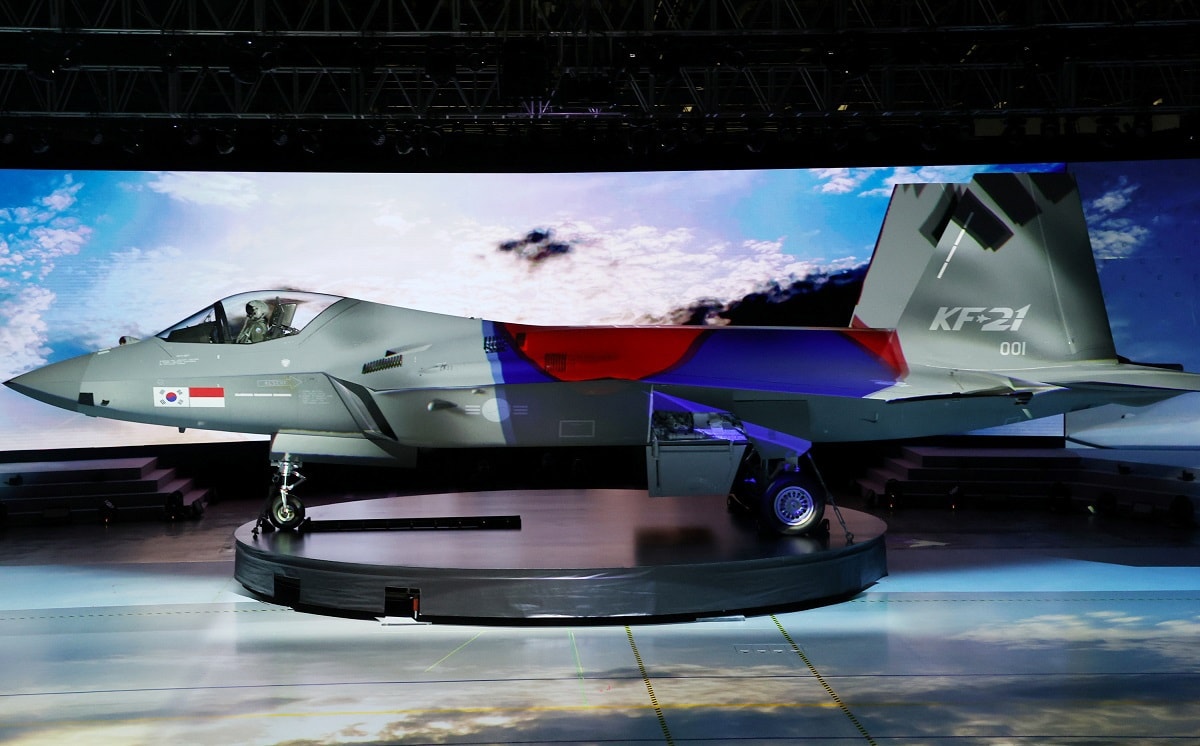 The KF-21 jet’s projected unit price of $65 million is too high to be considered a bargain-bin jet like the Golden Eagle, but about two-thirds the price of advanced non-stealth fighters like the Rafale and Typhoon.

If commercially successful, the KF-21 could serve as a steppingstone for Korea to develop a full fifth-generation stealth fighter, just as the lower-end Golden Eagle jet helped KAI develop the experience and manufacturing base necessary to develop the KF-21.

Sébastien Roblin writes on the technical, historical and political aspects of international security and conflict for publications including the National Interest, NBC News, Forbes.com , and War is Boring.  He holds a Master’s degree from Georgetown University and served with the Peace Corps in China.