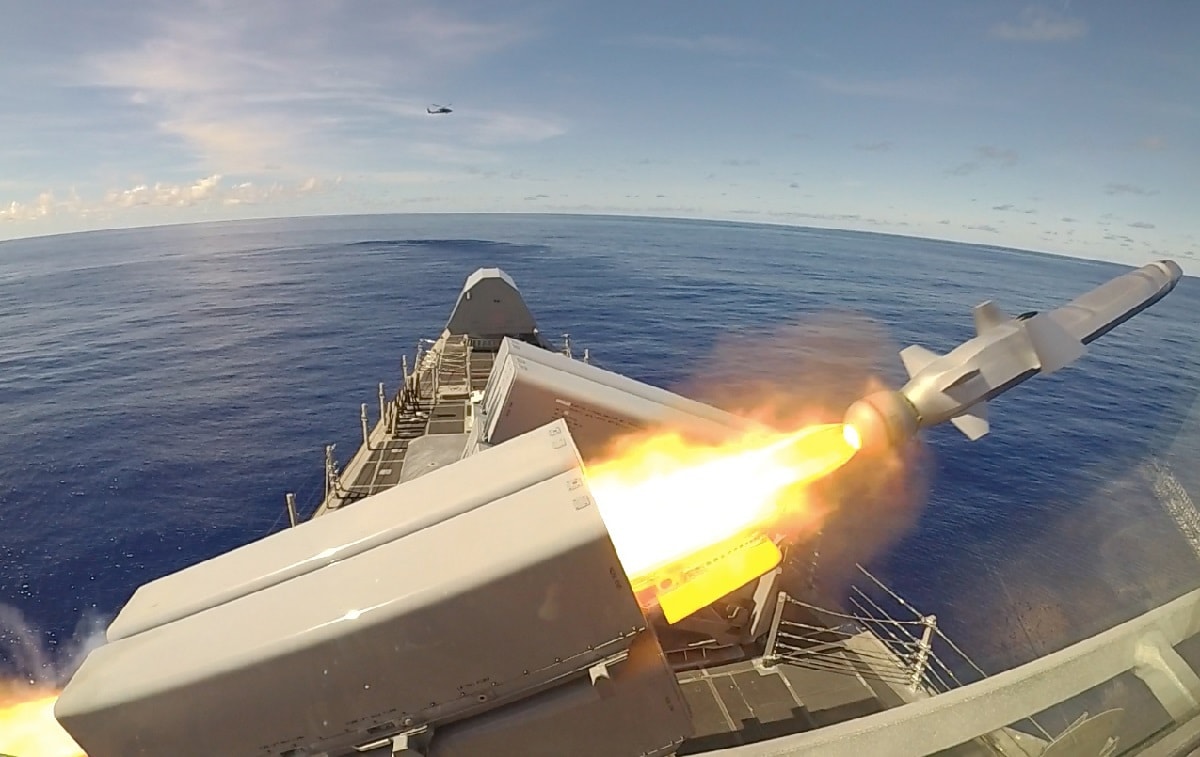 On April 29, Admiral Mike Gilday informed Congress that by the end of 2022 the Navy planned to complete the installation of Naval Strike Missiles launchers developed by Norwegian firm Kongsberg on the service’s 31 corvette-sized littoral combat ships.

Gilday also announced that in that timeframe, fifteen each mine-countermeasure and submarine-hunting modules would be deployed on the LCSs after years of delays.

If that ambitious schedule is met, that should finally give the troubled and under-gunned vessels the long-range punch and unique mission capabilities they have conspicuously lacked.

Currently, even surface warfare variants of littoral combat ships rely on relatively small-caliber 57-millimeter guns and Hellfire missiles only capable of engaging enemies a few miles away, ie. within visual range. That’s a big shortcoming considering even much smaller corvettes and missile boats operated by China, Iran, North Korea, and Russia can carry powerful anti-ship missiles with ranges measured in the dozens or even hundreds of miles.

Despite the good stealth and speed characteristics of littoral combat ships, the LCSs would have been reduced to bringing the proverbial knife to a swordfight (or literally, guns to a missile fight) even when confronting much smaller and/or less sophisticated surface adversaries.

That won’t fix all of the problems with the littoral combat ships, such as outrageously high operating costs and frequent breakdowns of the Freedom-class LCS’s propulsion system. However, it will at least enable the corvettes to pose a credible threat to surface ships small and large, and thus help disincentivize aggression in contentious waters like the Persian Gulf and South China Sea.

The Navy has been promising such an upgrade for years. In 2014 it tested mounting both Naval Strike and Harpoon missiles on the USS Coronado. But though the NSM was formally adopted in 2018 as the RGM-184 missile, it was only deployed on one operational ship, the Independence-class Gabrielle Giffords. Furthermore, the Navy seemed unable to rearm the Giffords’s launchers following a test-shot, raising questions as to whether the service had logistics in place for the new weapon.

However, Admiral Gilday’s announcement suggests the Navy is now confident it can proceed with the NSM upgrade. In fact, the service is also considering testing and possibly deploying NSM canisters on its San Antonio-class Landing Platform Dock amphibious ships, which previously did not carry anti-ship weapons.

NSMs are also deployed on ten Royal Norwegian Navy frigates and missile boats, and will be deployed on fifteen forthcoming Canadian Type 26 frigates, all but one of the German Navy’s twelve frigates, and eight Royal Malaysian Navy Maharaja Lela-class frigates.

The UK is also offering to sell eight NSM-equipped missile boats to Ukraine for $1.6 billion for deployment in the mid-2020s, while India is expected to procure helicopter-launched NSMs for its new fleet of MH-60R Sea Hawk helicopters.

A Naval Strike Missile measures about 4 meters long and weighs 880 pounds, including a 276-pound fragmentation warhead. That makes it a lightweight anti-ship missiles compared to the 488-lb warhead on the venerable Harpoon, or the 1,000-pound warhead on the sophisticated LRASM stealth cruise missile. However, lighter weapons are an easier fit for smaller ships than big missiles that require large vertical launch systems and lack powerful sensors that can detect very distant targets anyway.

You can compare here strikes from a Harpoon followed by an NSM that together capsized the decommissioned LPD Ogden in the 2014 SinkEx exercise.

At  $2.2 million per missile, the NSM costs over 57 percent more than a $1.4 million Harpoon Block II missile but has a proportionately greater range of 115 miles. Furthermore, the NSM’s sensors and stealth characteristics theoretically make it more likely to hit a designated target.

Like the Harpoon, the NSM uses a solid-fuel rocket booster to leap off a ship-based launcher, then discards the booster and switches to a turbojet engine slung on its back as it skims low over the water to minimize radar detection range at speeds between 537 and 690 miles per hour.

To avoid the formidable air defense umbrella protecting modern warships, NSMs are shaped to have a reduced radar cross-section, and are built out of non-reflective composite materials. Furthermore, in their terminal approach phase the missiles perform randomized banking maneuvers to evade the target’s close defense weapons.

An NSM missile cruises towards coordinates assigned by the launch platform using a combination of GPS, terrain recognition imaging, and inertial navigation systems—all the while maintaining a two-way link with the launching platform allowing the operator to re-target or abort the strike midflight if desired.

As ships are constantly on the move, in the terminal phase the missile activates an infrared seeker to search for targets, classify their ship-type, and home in for the kill, while filtering out clutter produced by waves and coastlines. The IR seeker has the advantage of being far more discrete than the active radar-seeker on a Harpoon and is unaffected by -jamming. The sensor’s classification ability also in theory allows the missile to discriminate against hitting, civilian ships, decoys, or low-priority adversaries.

The NSM can also be used for precisions strikes on land targets, a useful ability to have in a pinch if more specialized land-attack capabilities aren’t close at hand.

The NSM’s characteristics have inspired other U.S. military services to adopt it as a shortcut to fielding anti-ship capability, which coveted today due to the perception that a conflict with China would be primarily naval- and air-warfare focused.

The U.S. Marine Corps, for example, plans to deploy hundreds of JSMs onto unmanned JLTV trucks (a next-gen Humvee replacement) it could quickly insert onto small islands in the Pacific to provide land-based anti-ship support to U.S. Navy vessels. The ship-hunting ROGUE-Fires robots could even be dropped on the deck of U.S. amphibious carriers to give them temporary anti-ship capability.

Meanwhile, in 2018 the Army also test-fired a ‘palletized’ NSM from a HEMTT logistics truck, though the service appears to be focusing instead on a ship-sinking Precision Strike Missile launched from its HIMARS rocket launcher system.

Abroad, Poland deploys NSM coastal batteries aimed at countering Russia’s Baltic fleet, while Romania plans to procure its own NSM batteries by 2024 that could defend its coastline from Russia’s Black Sea Fleet.

The U.S. Air Force intends to use an air-launched variant called the Joint Strike Missile (JSM) which can fit into the internal weapons bays of F-35 stealth jet fighters operated by the United States, Norway, and Japan.

The JSM is one of the key new weapons set for integration in the F-35’s $16-billion Block 4 upgrade program. Compared to its surface-launched predecessor, the JSM offers a longer maximum range of up to 350 miles if it cruises at high altitude, though it can trade range for stealth by descending to a sea-skimming altitude. Japan, Norway, and the U.S. are all set to deploy air-launched JSMs.

Overall, the Naval Strike Missile may not have the range or speed of larger anti-ship missiles fielded by Russia and China, but seemingly is proving a convenient solution for rapidly fielding stealthy standoff anti-ship capability onto platforms that had little or none before.

Sébastien Roblin writes on the technical, historical, and political aspects of international security and conflict for publications including The National Interest, NBC News, Forbes.com and War is Boring.  He holds a Master’s degree from Georgetown University and served with the Peace Corps in China.  You can follow his articles on Twitter.