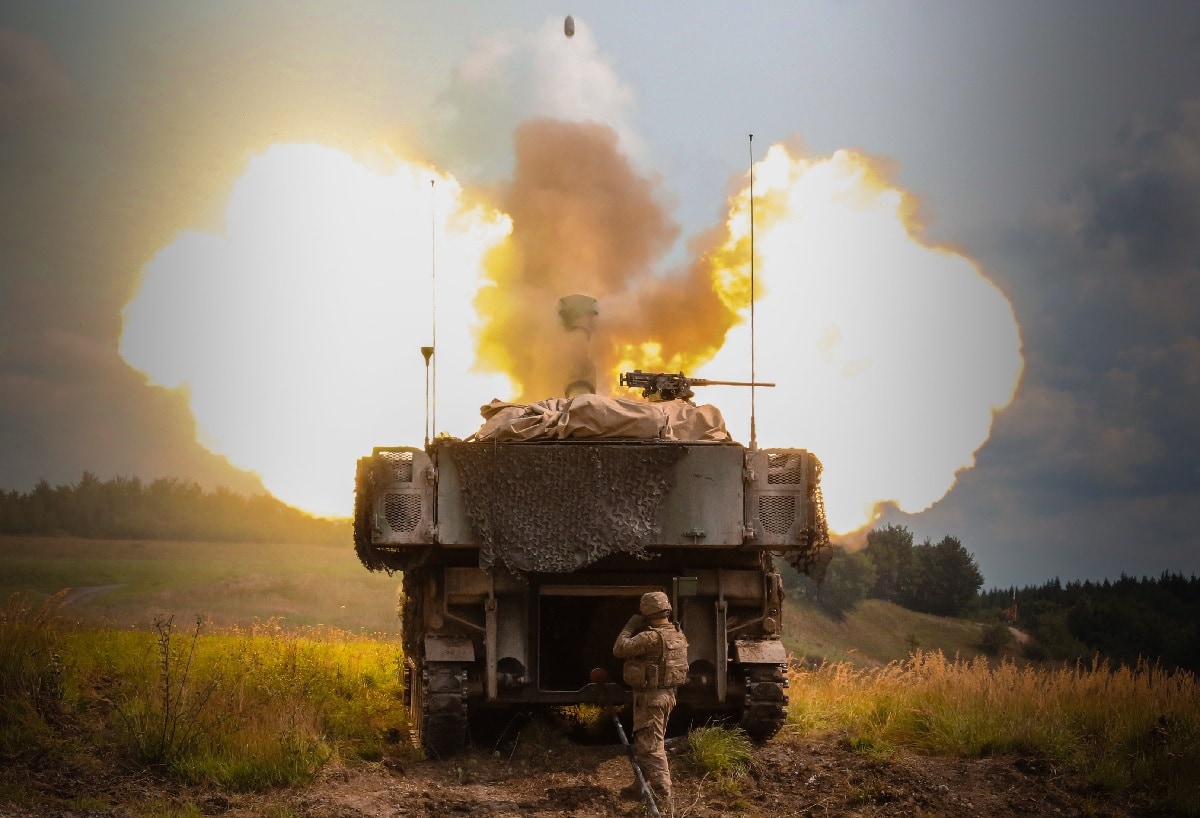 The Lightweight Fire Platform might end up being highly mobile and fully autonomous.

What Could Be Coming

The United Kingdom is on the hunt for a new light-weight artillery piece to replace their venerable L118 Light gun — and it might not even need a gun crew.

In a tweet, a Jane’s Land Warfare expert revealed concept artwork for the British Army’s yet-to-be-built Lightweight Fire Platform. Although the LFP is still in its infancy, it could produce a truly radical design.

The artwork shows a technical demonstrator that, rather than being a towed piece like the majority of conventional artillery, would move under its own power. Unlike other self-propelled howitzers like the United States’ M109 Paladin which rely on a large tracked design for mobility on the battlefield, the LFP would rely on a very distinct wheeled design.

Four individually articulating legs — sans axles — give the design an insect-like appearance and could in theory offer excellent off-road mobility, at least over hard-packed and rocky terrain. The design’s lack of axles suggests that an all-electric, or perhaps hybrid power plant would propel the spindly-looking vehicle.

Central to the design is of course the platform’s main barrel. Though it features a prominent muzzle brake, the caliber is not specified, though “multiple calibers” will be evaluated.

The Lightweight Fire Platform’s immediate predecessor is the L118 Light Gun, a 1970s-era 105mm towed field gun. The light howitzer entered service with the British Army as a successor to a previous 105mm “mountain gun” that lacked range and precision. Still, the L118 weighs just over 4,000 pounds and requires a prime mover or helicopter to transport both the howitzer itself as well as its 6-man gun crew. The United States Army fields a similar light howitzer, the M119, which is itself a slightly modified variant of the original British L118 Light Gun.

Though self-propelled artillery are not exactly a new battlefield innovation (the British fielded the Gun Carrier Mark I in 1917), the majority of vehicle-mounted howitzers have been heavily armed, relatively well-armored tracked vehicles — and dependent on a crew for operation.

The Lightweight Fire Platform would not be the first unmanned mobile artillery platform however: the United States Marine Corps (USMC) is already experimenting with something similar.

The USMC’s NMESIS platform is an amalgamation of several weapon systems. Starting with a Joint Light Tactical Vehicle with its roof, cab compartment, and windshield removed, the Corps mated two of the Navy’s new and extremely potent anti-ship missiles to produce an unmanned, land-based ship hunter.

Much remains unknown about the Lightweight Fire Platform — even the caliber of ammunition if would fire is not yet known. Still, an autonomous and highly mobile light-weight artillery piece could be a potent battlefield force multiplier.

In this article:Artillery, British Army, Drones, Military, US Marine Corps