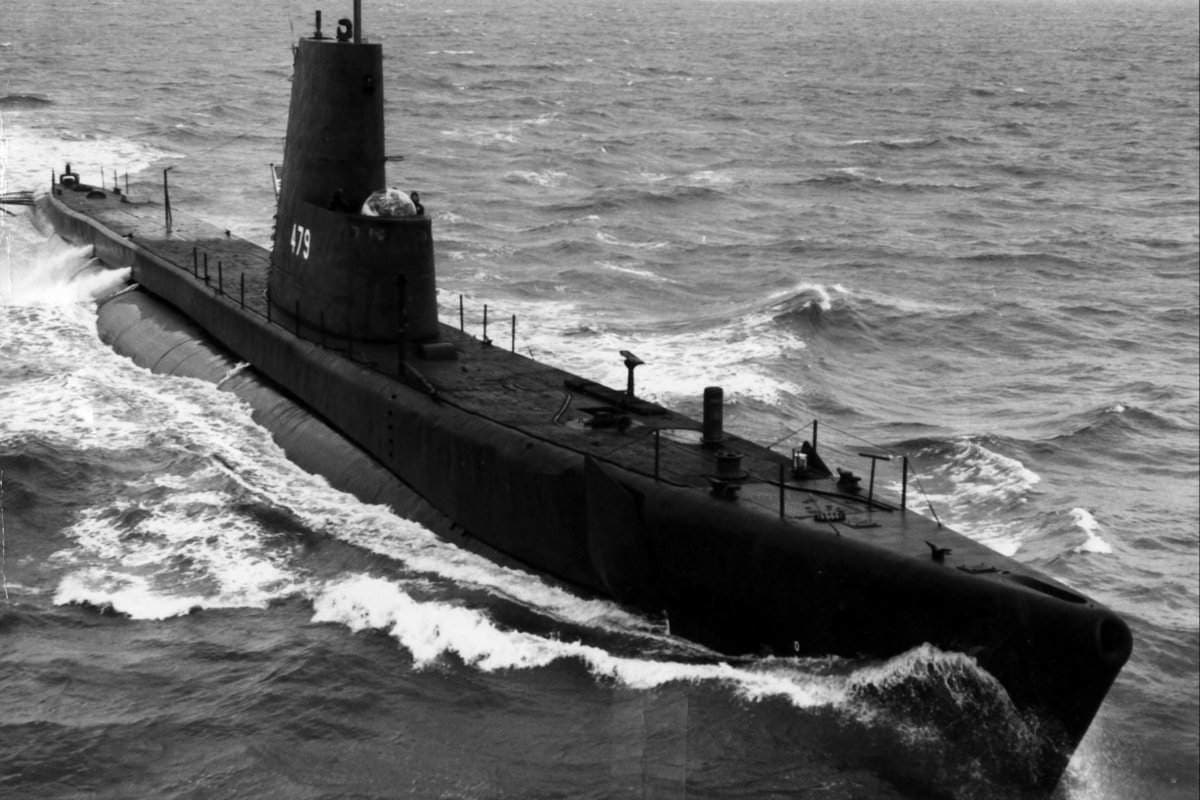 On November 23, 1971, the Pakistani submarine Ghazi was creeping quietly off the coast of India in the Bay of Bengal when she received a Top Secret order from headquarters far away in Karachi: she was to hunt down and destroy the INS Vikrant, the Indian’s Navy’s only aircraft carrier.

India and Pakistan were not yet officially at war, but skirmishes were already raging as the Indian Army massed forces alongside Bengali rebels to invade East Pakistan, ie. modern-day Bangladesh. Sinking Vikrant was deemed so important it was worth starting the war.

But ten days later, the Ghazi met a terrible fate that left none of the ninety-three officers and sailors aboard alive—and the cause of her destruction remains a controversial mystery to this day.

After several failed attempts, Pakistan acquired its first submarine in 1963 by leasing the 2,400-ton USS Diablo, a Tench-class diesel-electric submarine commissioned at the end of World War II. The Tenches were built for long-distance operations, with a range of 16,000 nautical miles and an armament of twenty-eight torpedoes. Diablo had received a partial ‘Fleet Snorkel’ modernization of her snorkel, sonar, conning tower, and air conditioners, but lacked critical upgrades to her engines and batteries.

Still, the boat, renamed the PNS Ghazi, was eventually purchased outright while her crew received training from the British Royal Navy. The Ghazi in short order saw combat when war broke out between India and Pakistan in August 1965, dispatched initially on reconnaissance and then hunter-killer patrols. India’s Vikrant was the preferred target then too, but the carrier was undergoing repairs and did not participate in the conflict.

Finally, on September 17, Ghazi detected a ship believed to be the Indian air-defense frigate Brahmaputra and launched a three-torpedo volley before diving deep to evade retaliation. The crew heard three explosions and were credited with a sinking. But records do not show Brahmaputra detected, let alone was hit by, torpedoes, and it remains unclear what caused the explosions overheard by Ghazi’s crew.

Postwar, a U.S. arms embargo made upkeep of Ghazi difficult, so Islamabad dispatched her to Turkey for a refit. Because the Suez-canal was then closed, that necessitated a two-month-long circumnavigation of Africa with numerous refueling stops. In Turkey, the World War II-era submarine received updated electronics and targeting computers and a new minelaying capability.

War again loomed with India late in 1971 following a brutal crackdown by the Pakistani military in East Pakistan (today, the country of Bangladesh) which eventually compelled New Delhi to militarily support Bengali rebels.

In August 1971 Vikrant deployed to the Bay of Bengal in anticipation of the conflict. In November, Islamabad made the fateful decision to detach Ghazi from the main strength of the Pakistani Navy in the Arabian Sea to the Bay, hoping a lucky attack on Vikrant could change Pakistan’s fortune in the imminent conflict. While on the hunt, Ghazi could also deploy mines at the entrance of the Indian naval base at Visakhapatnam.

This was a highly risky undertaking due to the lack of supporting naval forces and inadequate port facilities in East Pakistan, and the still poor technical condition of Ghazi. But on November 14 she began her voyage around the Indian sub-continent under captain Zafar Muhammad Khan (formerly Ghazi’s chief engineer), arriving in the Baby of Bengal six days later.

But after receiving authorization to sink Vikrant on November 23, Khan’s hunt for the ship proved ill-fated. The Indian Navy already suspected Ghazi’s mission, and furthermore intercepted a signal instructing the East Pakistani port of Chittagong to ready submarine-grade oil lubricants. Later a civilian fishing boat reported spotting a snorkel off the coast of Sri Lanka.

The Indian Navy began a series of deceptive measures that successfully ‘leaked’ to Pakistani intelligence that Vikrant remained near Visakhapatnam, while in reality she was cruising far to the east towards the Andaman Islands.

So Ghazi, skirting off India’s eastern coast, had no chance of locating Vikrant. Finally, on December 2 Khan decided to take on his secondary mission laying mines at the entrance to Visakhapatnam, which his logs show began the night of December 2.

But late in the afternoon of December 3, Pakistan launched an unsuccessful preemptive strike on Indian airbases. Open war was now at hand, and at midnight, the R-class destroyer Rajput quietly slipped out of Visakhapatnam harbor with her lights out with orders to meet with Vikrant—and sink Ghazi if possible. Of World War II vintage, Rajput’s scheduled decommissioning had been interrupted by the conflict.

At a quarter past midnight, Rajput’s sonar detected a contact a half miles ahead. Captain Inder Singh ordered the launch of two Mark VII depth charges. Moments later a huge explosion emanated from below. Singh reported he believed his ship had sunk a submarine.

At dawn, fishermen found an oil slick and debris—including a life vest marked USS Diablo. The following day, military divers located Ghazi buried into the seafloor at 99 feet deep—her torpedo compartment blown wide open. The submarine’s periscope was still raised and her bow was pointed toward Visakhapatnam. Over subsequent days, diving teams entered the ship and recovered intelligence including war logs, communications, and (later) a clock suggestively frozen at a quarter past twelve.

With Ghazi’s destruction, Vikrant was free to unleash her airwing, contributing to the rapid collapse of the Pakistani forces in Bangladesh. Post-war, Pakistan commemorated Ghazi’s crew as martyred heroes. But the Navy treated the loss not as a tactical defeat—but rather as a cause to improve its safety standards.

The Indian Navy credits Rajput with sinking Ghazi—which would make Ghazi the only submerged submarine destroyed in combat after World War II. But Pakistani accounts insist that Ghazi suffered an accident, perhaps falling victim to one of her own mines.

Though some might dismiss the Pakistani version as arising from national pride, some Indian naval officers have claimed the Indian Navy may have intentionally lost or destroyed documents that would have complicated the narrative that Ghazi was sunk by Rajput.

Perhaps the wartime blackout first instituted that evening may have fatally disoriented Ghazi’s crew as to the position of her own minefield. And the explosion witnessed on Rajput after launching depth charges may actually been caused by one of Ghazi’s mines.

But if Ghazi was struck by torpedoes or a mine, why was her bow ruptured outwards as if from an internal explosion?

One theory is that the Ghazi crash-dived to avoid Rajput only for her bow to impact the seafloor, detonating her weapons. A handling error with the unfamiliar mines is also possible.

Another compelling theory is that flammable hydrogen gas emitted while charging Ghazi’s lead-acid batteries combusted due to an electrical spark. Ghazi’s logbook did report high levels of hydrogen gas—but then shouldn’t the logbook have been burned in a fiery explosion? Perhaps a more localized gas explosion in the torpedo rooms detonated the weapons and ruptured the hull, explaining why the rest of the ship wasn’t burnt inside out.

Overall, most independent analyses concur the damage to Ghazi’s bow suggests an internal explosion. But that doesn’t rule out the possibility that an internal mishap in Ghazi wasn’t precipitated by a possible encounter with Rajput.

In the end, the only certain knowledge of what happened onboard Ghazi at a quarter past midnight on December 4, 1971, was lost with her crew—as is so often the case with submarine incidents.