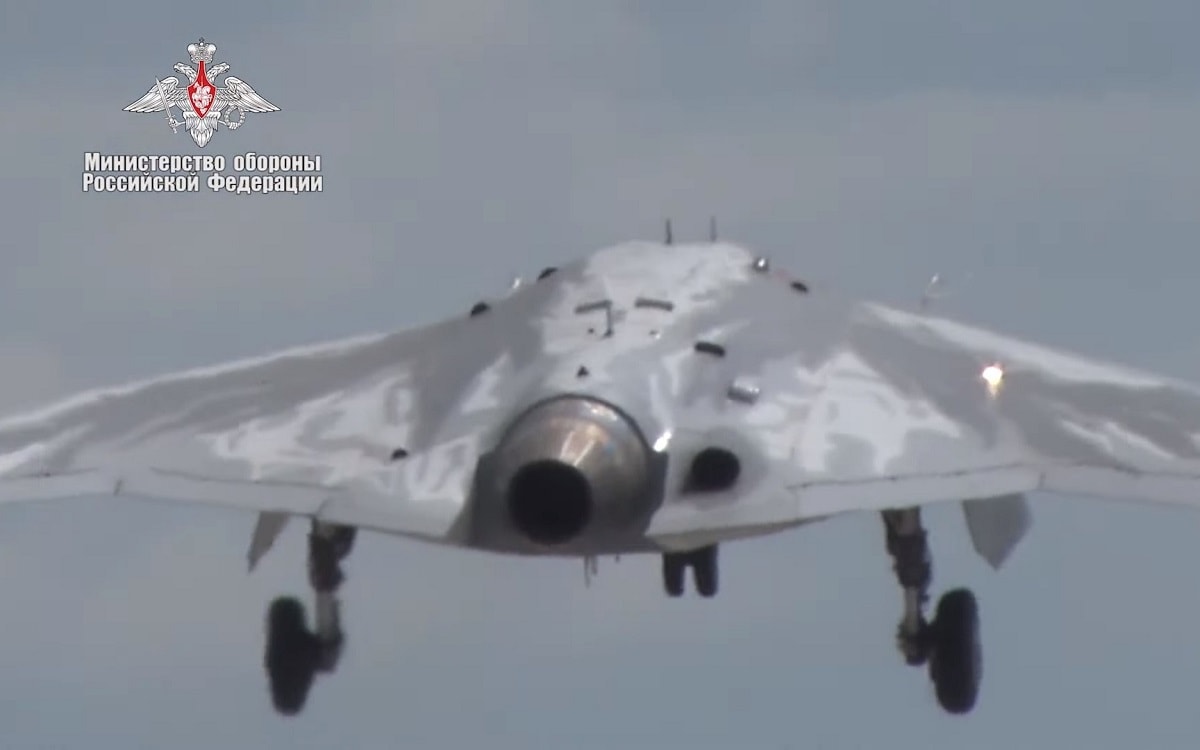 In 2021 Russia is beginning series production of its first large armed drones, or unmanned combat air vehicles (UCAV). That leaves it well behind not only the United States and China, but also Iran, Israel, and Turkey.

But in the 2020s, Russia is poised to begin operating a variety of UCAVs, with several more types on track for production and many concepts in the wings awaiting state contracts.

Still, Russia’s military is eager to shorten the kill chain by arming surveillance drones to conduct their own strikes. Crucially, Russian munitions manufacturers have developed lightweight precision weapons (pictured here) for use by drones, notably the KAB-20, KAB-50 and KAB-100 guided bombs weighing 46, 110 and 220 pounds respectively that can mount satellite, laser and TV guidance systems. There’s also the UPAB-50 glide bomb with pop-out wings and a range of 18.6 miles, and the 110-pound Kh-50 missile, similar to the U.S. Hellfire.

Following is a survey of six Russian UCAV drones, three in advanced stages of development, the others in early concept stages.

The Orion, or Inokodhets (“Pacer”), is the first Russian UCAV to make it across the finish line with series production beginning at a factory near Moscow later this year. Prototypes were combat tested in Syria in 2018 and it’s entering service with the Northern Fleet’s 216th Independent UAV Regiment at Severomorsk, to be followed by a unit in the Pacific Fleet. A complete Orion UAS comprises 3-6 drones, which use fully electric propulsion and are made of vacuum-infused composite materials to save weight.

Like the U.S. MQ-1 Predator, Orion is a Medium-Altitude Long-Endurance (MALE) drone capable of flying high (up to 24,600 feet) above short-range air defenses and circling overhead for hours upon hours. However, Orion has less than a quarter the range and a smaller payload, making it more comparable to the Turkish TB2 Bayraktar, a type which caused significant damage to Russian allies in Armenia, Libya and Syria in 2020.

In 2022 Russia plans to begin exporting Orion-E drones. Samuel Bendett, an expert on Russian unmanned systems at the Center for Naval Analyses and fellow at the CNAS think tank, observed “Russian commentators writing about domestic UCAV development are basically admitting that they are in a race with Turkey for a military drone export market share,” adding that they curiously did not seem to perceive China’s less-expensive UCAVs as a competitive threat. The TB-2 and its munitions are more combat proven, but Orion has greater range.

Also in development since 2011, the Altius ‘heavy drone’ has been beset by difficulties, including denial of foreign-built engines, an embezzling director and multiple design bureau transfers.

A High Altitude Long-Endurance (HALE) drone powered by two turboprop engines, the Altius can fly 39,000 feet high for up to 48 hours while scanning everything below with its electro-optical turret and side-looking radar. But unlike the U.S. RQ-4, it can carry weapons, ranging from small guided bombs to Grom missiles with a range of 75 miles. A complete Altius UAS comprises two drones equipped with satellite-links for long-distance control, though they also can function autonomously for long durations.

Altius could undertake peacetime patrol and surveillance roles, as well as long-range/endurance strike and reconnaissance missions in the absence of high-altitude air defenses. But while Russia moves ahead with Altius, the U.S. Air Force is retiring its RQ-4 HALE drones due to their vulnerability to such defenses.

Kronshtadt is developing an enlarged 2.5-ton version of Orion with a satellite-communications link, allowing it to be controlled from across the globe. Compared to the Orion, Sirius (or Inokhodets-RU) could cruise faster at 110 miles per hour, and nearly four times further carrying more than twice the payload—though with endurance reduced to 20 hours instead of 24. It could also network with manned aircraft.

The Russian firm also has unveiled a mockup Helios-RLD HALE drone with wings spanning a massive 30 meters. Propelled by a turboprop pusher engine, Helios theoretically could fly 6,000 feet high for up to 30 hours, equipped with an underslung side-looking multi-mode radar with early-warning capability, as well as carry weapons. However, it’s unclear whether Helios will attract orders given the Altius drone already occupies the HALE niche.

Though Russia is interested too, Kronstadt’s private 7-ton Grom (“Thunder”) concept is the only known Russian loyal wingman project to date according to Bendett.

Kronshtadt claims a stealthy Grom (“Thunder”) UCAV could be developed economically because it would share systems in common with the Orion drone and Yak-130 jet trainer, including the latter’s two AI-222-25 turbofan engines. Supposedly a single Su-35 or Su-57 fighter could control three 3-4 Grom flying at up to 660 miles per hour at altitudes as high as 40,000 feet.

In an interview, Kronshtadt designer Vladimir Vorno states Grom could be used in the first wave of an attack to “break through intense air defenses—maybe some of them will die, but we will not lose [human] pilots. At the same time, they will force air defenses to go active, allowing radars to be detected and destroyed [by radar-homing missiles].”

Time will tell if Grom can be developed and built as affordably as claimed—and if Russia’s Ministry of Defense will provide funding.

The hulking 22-ton S-70 “Hunter-B” is powered by a turbofan engine and is basically a flying wing stealth bomber without a pilot. Though distinguished by its stealthy geometry and surfaces made of non-radar reflective composite materials, the S-70’s jet engine appears to be indiscrete. That said, Sukhoi has created a concept model of a ‘cleaner’ S-70 with a stealthier engine design, so production aircraft may be less observable.

Assumed to be intended for critical penetrating strikes with nuclear or precision weapons, the S-70 can also team up with Su-57 stealth fighter and has even been tested carrying air-to-air missiles. However, it reportedly may be able to carry out missions fully autonomously (ie. without human direction) if its command-link is disrupted.

You can read more about the Okhotnik-B in this earlier article.