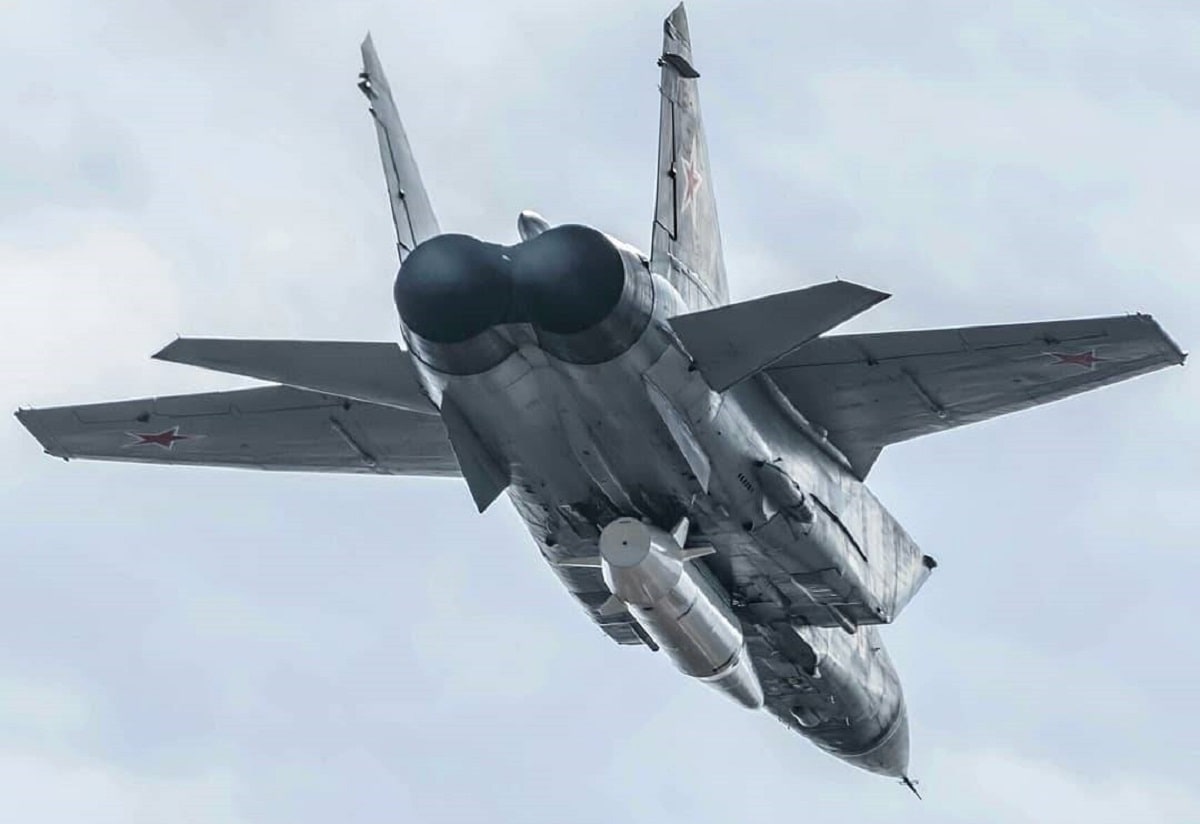 As such the Foxhound was never exported and the type is very rarely seen abroad aside from a couple dozen retained by Kazakhstan.

But all that changed on June 25 as tensions between Russia and NATO flared following a patrol by the destroyer HMS Defender in the Black Sea. Two MiG-31Ks attached to the 929th Test Flight Center in Akhtubinsk deployed to Hmeimim airbase in Syria, finally following in the well-trodden footsteps of virtually every other kind of combat aircraft operated by the Russian military.

The two MiGs, designated 90 Red and 96 Red, weren’t there to provide air defense. After all, more maneuverable and modern Su-35S fighters were better suited for confrontations with NATO fighters in the region.

Instead, a video posted by the Russian military shows a MiG-31 taking off from Hmeimim with an exotic hypersonic air-launched-ballistic missile under its belly called the Kh-47M2 Kinzhal, (‘Dagger’ in Russian).

Russia has specifically modified at least 10 MiG-31Ks were to serve as dedicated Kinzhal missile carriers. That said, the advanced missiles were delivered to Syria separately by cargo plane.

The specialized MiGs then went on to practice mock attacks against a far more interesting target than a simulated enemy: a real-life NATO aircraft carrier, the Royal Navy’s HMS Queen Elizabeth. Positioned near Cypress, the Queen Elizabeth had a few days earlier launched F-35B stealth jump jets to undertake the first British carrier airstrikes in a decade targeting ISIS forces in Syria and Iraq.

The MiGs, alongside three Tu-22M3 bombers armed with anti-ship cruise missiles, and escorted by Su-35S fighters, carried out the attack runs in conjunction with a five-ship taskforce from Russia’s Black Sea Fleet composed of the missile cruiser Moskva, two frigates and two Improved Kilo-type diesel-electric submarines.

To be fair, using a NATO carrier groups for practice also gives NATO planners a chance to study Russian methods and sharpen their own defenses. And British F-35B stealth jump-jets buzzed the Russian frigate Admiral Makarov in response as you can see in this recording.

The reason Russia is using an air defense interceptor in an anti-ship role is that the Kinzhal needs to be launched at high altitude while traveling very fast to achieve peak range and speed—exactly the kind of performance envelope the MiG-31 excels at.

After launch, a Kinzhal’s solid-fuel rocket boosts it up to 10 or 12 times the speed of sound. Unlike a traditional ballistic missile, a Kinzhal also maneuvers so its trajectory isn’t predictable and thus vulnerable to interception.

The weapon heads towards a target up to 1,240 miles away using an inertial navigation system assisted by a Global Navigation Satellite System (GLONASS). The missile can be remotely controlled to a degree, but it also allegedly has an all-weather seeker—optical and/or radar-based—allowing it to hit moving targets such as ships.

Ostensibly precise enough to land on average within a meter of a designated target, the Kinzhal carries a 1,100-pound fragmentation warhead—or a 100 to 500 kiloton nuclear weapon, ie. between 6 and 33 times the yield of the atomic bomb dropped on Hiroshima.

Tu-22M3 supersonic bombers can also in theory carry up to four Kinzhals too, though the lack of Kinzhal-armed Tu-22Ms appearing in media suggests Russia may still be working out the means to deploy the weapon on the slower bomber. Tu-22Ms that flew alongside the Foxhounds in June instead carried older Kh-22 supersonic anti-ship cruise missiles.

Hypersonic Missiles To Stay in the Mediterranean?

Like many aircraft designed to prioritize maximum speed over lift, the MiG-31 requires a longer runway—think 1,200 meters—for takeoff, and even longer when carrying a nearly five-ton Kinzhal missiles.

It so happens Russia lengthened the runway at Hmeimim in 2020 by roughly 300 meters. That suggests the Foxhound deployment was planned well in advance, though a longer runway also aids in operations of the Tu-22M bombers and heavy cargo aircraft.

The question remains whether Russia will retain missile-armed Foxhounds in Syria over the longer term, or if the June deployment is just a coincidental marriage of opportunistic saber-rattling and operational testing. If Russia has longer-term plans to keep the jets in Syria, it could mark an important step in converting Syria to a more offensively capable outpost from which Moscow can project military power, as Kinzhal-armed aircraft could enable very rapid attacks against NATO land- and maritime targets on the Mediterranean.

Of course, a handful of forward-deployed to MiG-31s and Tu-22 bombers Syria likely wouldn’t survive long in an all-out high-intensity conflict. However, they could threaten to do much damage at a war’s onset in a prompt first strike role, especially if using nuclear weapons. That possibility in turn might compel NATO to dedicate stronger defensive assets to the Mediterranean, such as ships with Aegis combat systems—even in peacetime.

Sébastien Roblin writes on the technical, historical and political aspects of international security and conflict for publications including the The National Interest, NBC News, Forbes.com and War is Boring.  He holds a Master’s degree from Georgetown University and served with the Peace Corps in China.