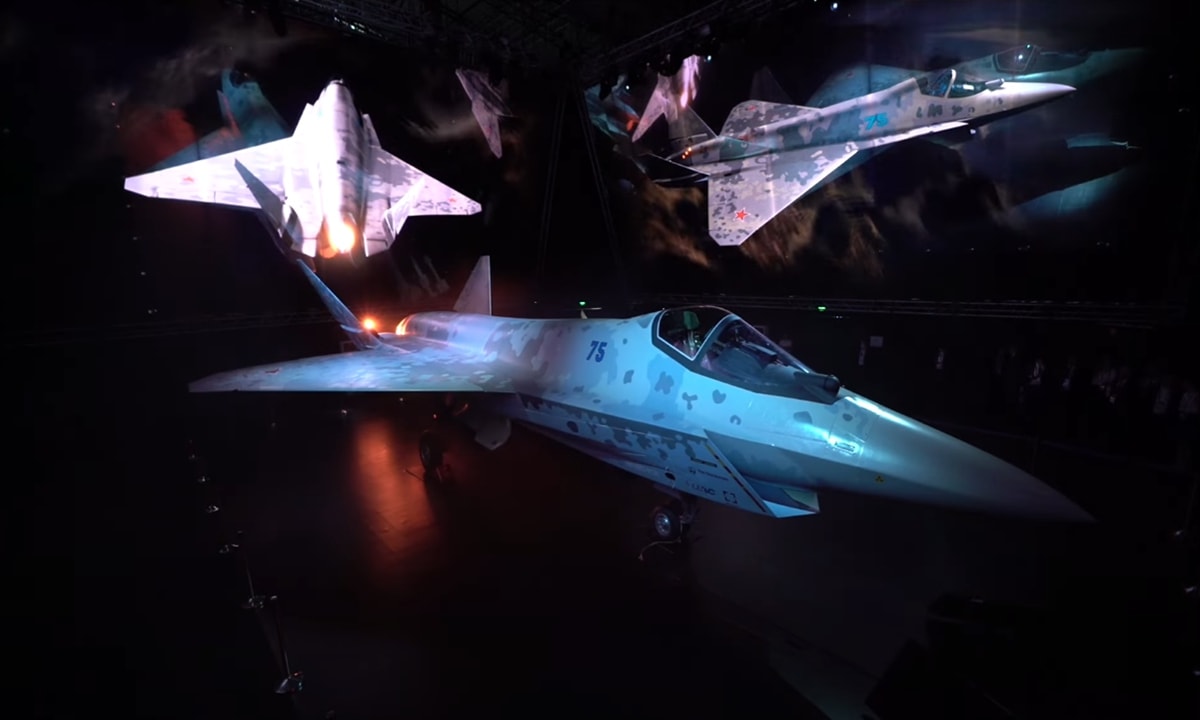 After near unlimited amounts of speculation, the lightweight 5th generation fighter is unveiled.

Russia’s newest fighter airplane, a 5th generation stealth aircraft, finally came to light during the MAKS International Aviation and Space Salon, revealing not only the airplane’s size and shape, but also some of the airplane’s flight characteristics and capabilities.

The hype surrounding Russia’s newest fighter is hard to over-state. Prior to the Su-75’s unveiling at the MAKS, the aircraft’s manufacturer United Aircraft Corporation launched a glitzy media campaign hinting at the aircraft’s capabilities while not giving too much away. Previous coverage of the aircraft estimated some of the Su-75’s characteristics, which can now be broken down with more detail and a higher degree of certainty.

Around the time of the Checkmate’s unveiling, Russian President Vladimir Putin spoke, saying that, “what we saw in Zhukovsky [Russian city hosting the MAKS airshow] today demonstrates that the Russian aviation has a big potential for development and our aircraft making industries continue to create new competitive aircraft designs,” underlining the Russian aviation industry’s desire to become a viable competitor to the Boeing-Airbus aviation duopoly in both civil and commercial aviation.

Indeed, the Su-75 seems to be aimed for an international export market rather than exclusively for the Russian armed forces, though Russian defense officials have indicated that the fighter would be adopted domestically as well. During the airplane’s pre-unveiling media blitz, promotional material featured airmen from Argentina, the UAE, Vietnam, and India, highlighting the 5th generation airplane’s prospective appeal as a highly exportable airframe.

Indeed, the head of Russia’s Rostec corporation claimed that the airplane would cost just $25-30 million, a price tag substantially below that of other stealth fighters like the American F-35, which costs roughly $80 million per airframe. Some online commentators have seen the Russian plane’s price tag as a lowball estimate, given both the difference in price between the American stealth fighter and the Su-75, as well as the vast amount of R&D that went into the F-35’s long and incredibly expensive development process

Cheap… But at a Cost

Still, that low price point could be a reflection of the Su-75’s capabilities, which are thought to be significantly below that of other 5th generation fighters like the American F-22 — arguably the stealthiest and most capable 5th generation air superiority fighter in existence — or the F-35, which though perhaps less stealthy than the F-22 is nonetheless widely regarded as a very stealthy platform.

The Su-75 certainly sports several characteristics seen in stealthy fighters such as a prominent chine running along the airplane’s nose, air intakes and into the wing roots, as well as a canted, or V-shaped tail assembly common among 5th generation airframes. The airplane also features an internal weapons bay that hides munitions from enemy radar and would help preserve the airplane’s low-observable radar cross-section.

However, one of the airplane’s potential design shortcomings (and consequently perhaps the reason for its astoundingly low price tag) is its single-engine design, which could hider the plane’s supposed capability to supercruise.

In addition, the engine’s exhaust nozzle and airframe rear appear to be only moderately serrated, a decision that could ease manufacture and keep costs low, but leaves the airplane’s rear aspect much more detectable to enemy radar.

This design choice is also shared in the Su-57, Russia’s first 5th generation fighter whose stealthy capabilities are concentrated to dissipate radar from the frontal aspect, but not the rear. In addition, the new airplane appears to share a bulbous infrared search and track module near the canopy’s lower edge. This is very similar to the Su-57 and a decidedly unstealthy characteristic.

Lastly, and quite interestingly, the Su-75 has a twin-wheel nose landing gear. This type of front landing gear design is commonly seen in airplanes capable of aircraft carrier landings, as the twin-wheel design is better able to withstand the increased stresses inherent to landing at sea. While this is not exclusively a carrier landing design, the Su-75’s dual wheels could indicate a potential naval application.

While the Su-75 is almost certainly not as stealthy as its other 5th generation counterparts — and in particular, the American F-35 and F-22 airframes — the airplane would nonetheless almost assuredly be more difficult to detect than previous 4th and 4++ generation airplanes. If it’s almost unbelievable $25-30 million price tag is accurate, then Russia just may have developed one of the most exportable true stealth fighters on the market. More information is certainly needed — but the Su-75 is a very intriguing airplane.