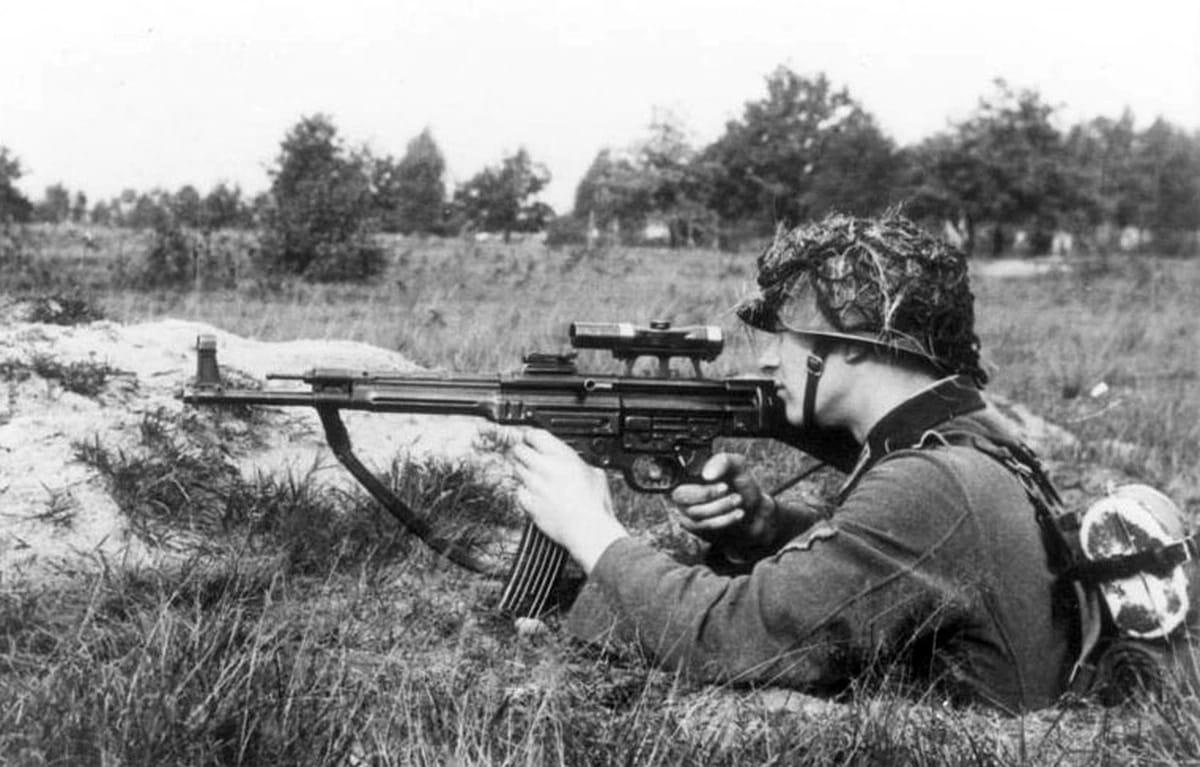 In 2012, rebels of the Free Syrian Army posted a video in which they uncovered an arms cache containing five thousand assault rifles. Though not an uncommon episode in a civil war then in its early stages, what was truly bizarre was that the rebels had uncovered a cache of Sturmgewehr 44s—an assault rifle designed by Nazi Germany seventy years earlier.

How did a weapon only produced in the final years of World War II begin appearing in a Middle Eastern civil war seventy years later?

Despite its limited impact on World War II battlefields, the Sturmgewehr is already legendary for being the first successful, mass-produced “assault rifle”—a weapon capable of accurate single shots at a long distance and deadly automatic bursts at shorter range.

The standard infantry weapon during World War II was the bolt-action rifle, long bulky weapons with heavy bolts that needed to be manually pulled before each shot. These used high-powered rifle cartridges that remained accurate at long distances. However, infantry squad leaders were often assigned less bulky submachineguns using pistol rounds. These were much deadlier at close quarters than a rifle but lost power and accuracy beyond one hundred meters (roughly the length of a football field.)

However, battlefield research showed that except for highly-trained snipers, the average soldier rarely fired at long range, and rifle rounds accounted for few casualties compared to machineguns capable of accurate automatic fire.

Exceptionally, the Soviet Union experimented with equipping entire companies only with PPsH submachineguns instead of rifles, making them extremely deadly in close combat in urban environments—but ineffectual in longer-distance fighters over open ground. Meanwhile, the U.S. made large-scale use of semi-automatic M1 Garand rifles and M1 carbines, which were better but still lacked automatic fire capability save for the latter’s M2 variant. (Germany and Russia also deployed semi-automatic rifles on a more limited scale.)

Based on research showing that infantry rarely fired at targets further than two hundred to three hundred meters away, the German Army became interested in developing a rifle using intermediate-strength 7.92×33 millimeter kurze cartridge that could fire accurately beyond three hundred meters, but could still switch to automatic fire for a close engagement without excessive recoil. The weapon produced a muzzle velocity of 685 meters a second, nearly twice that of a submachinegun round, and 92 percent as powerful as a standard German Kark 98k bolt-action rifle.

Using a curved thirty-round magazine, the StG-43 could achieve a cyclical rate over five hundred rounds per minute. While burst fire tends to be inaccurate, it is also more effective at suppressing opponents, preventing them from firing back. This ability to provide covering fire while assaulting an enemy position to its designation as a “Sturm” (“storm” or “assault”) rifle.

German paratroopers had already been issued a small number of FG.42 rifles capable of automatic fire, but the expensive and complicated weapons used 7.92×57 millimeter rounds that produced greater flash, noise and recoil.

However, Hitler objected to the German army’s plan and demanded new submachine guns instead. Accounts claim he either insisted that the bolt-action rifle’s better long-range accuracy remained essential or perhaps more astutely worried that the beleaguered Third Reich lacked the industrial resources to scale up production.

However, the German armament office went behind the Fuehrer’s back and ordered the weapon anyway, disguising it with the designation Machine-Pistol 43. Hitler learned of the deception, halted the program, then changed his mind after a successful trial program, and allowed it to enter full-scale production. This led to the weapon being variously designated the MP-43, the StG-43 and the StG-44.

Germany managed to churn out over 426,00 StG-44s out of 4 million planned before its defeat. Initially assigned to elite units, StG-44s were increasingly delivered to low-quality Volksturm militias in the hopes increased firepower would counterbalance inferior training and physical fitness. Thus, while the weapon performed well, its battlefield impact was inevitably limited.

The Nazis characteristically devoted resources to developing exotic specialized variants it probably could not afford. The Vampir, for example, had an infrared night-fighting scope with a battery life of 15 minutes and a range of 200 meters, while the Krummlauf featured a barrel curved at a thirty-degree angle to safely shoot around the corners of street blocks!

However, the implications of the StG-43’s versatility were widely appreciated, particularly in the Soviet Union. In 1947, Soviet weapon designer Mikhail Kalashnikov combined the features of the StG-43 with the American M1 Garand rifle to form the Avtomat Kalashnikova—the AK-47. The rugged assault rifle soon proved deadly, reliable and iconic in conflicts across the globe.

However, Communist East Germany’s police and army continued using MP-43s through 1962 until they were replaced with AK-47s, SKS carbines and PPsH submachineguns. Yugoslavia also used MP-43s with select units and its successors continue very limited-scale production of the rare 7.92×33 millimeter ammunition. And the weapons were only slightly modified to appear as the rebel sci-fi blasters in wintery in The Empire Strikes Back.

This brings us to the real-life rebels using StG-44s in Syria today. As East Germany began receiving new weapons from the Soviet Union, sold 4,500 of its World War II-vintage assault rifles to Syria in 1964, along with ammunition, conducted under relative secrecy. This was followed by additional shipments to Syria and Palestinian militant groups which also included T-34 tanks and PPsH-41 submachine guns.

East Germany was hardly alone in selling ex-Nazi armaments to the Middle East, nor of selling German rifles in particular. The Third Reich’s genocidal regime made extensive use of slave labor factories, particularly in occupied Czechoslovakia. Afterward, the Czechs not only exported the Nazi weapons on they had on hand, but even manufactured their own versions both for domestic service and export.

An extremely breakdown-prone Czech variant of the famous Messerschmitt 109 fighter was also adopted by nascent Israeli Defense Force. Four of these undertook a near-disastrous strafing run on an Egyptian column advancing on Tel Aviv that nonetheless may have saved the newborn Jewish state by bringing the attack to a halt.

Later, the Czechs began exporting Nazi Panzer IV medium tanks and turretless Jagdpanzer IV tank destroyers to Syria which saw use against Israel during the 1960s. The Czechs also exported 10,000 “self-loading rifles” including StG-44s, along with 500,000 rounds of ammunitions—deals for which Syria eventually still owed $900 million in payment by 1990.

As Syria acquired a more complete inventory of Cold War-era weaponry and the rare 7.92×33 millimeter ammunition grew scarce, the guns were eventually placed in long-term storage—which is how they came to fall in the hands of Syrian rebels in 2012.

For four years, the weapons were widely photographed and filmed in combat with Syrian rebel factions, including ISIS and Kurdish fighters, as you can see with this link. However, by 2017 the ammunition had become so scarce that the weapon’s black-market value in Syria collapsed and its appearances grew more infrequent.

Thus, hopefully closes the final chapter on the combat employment of a weapon that continues to impact how wars are fought to this day.