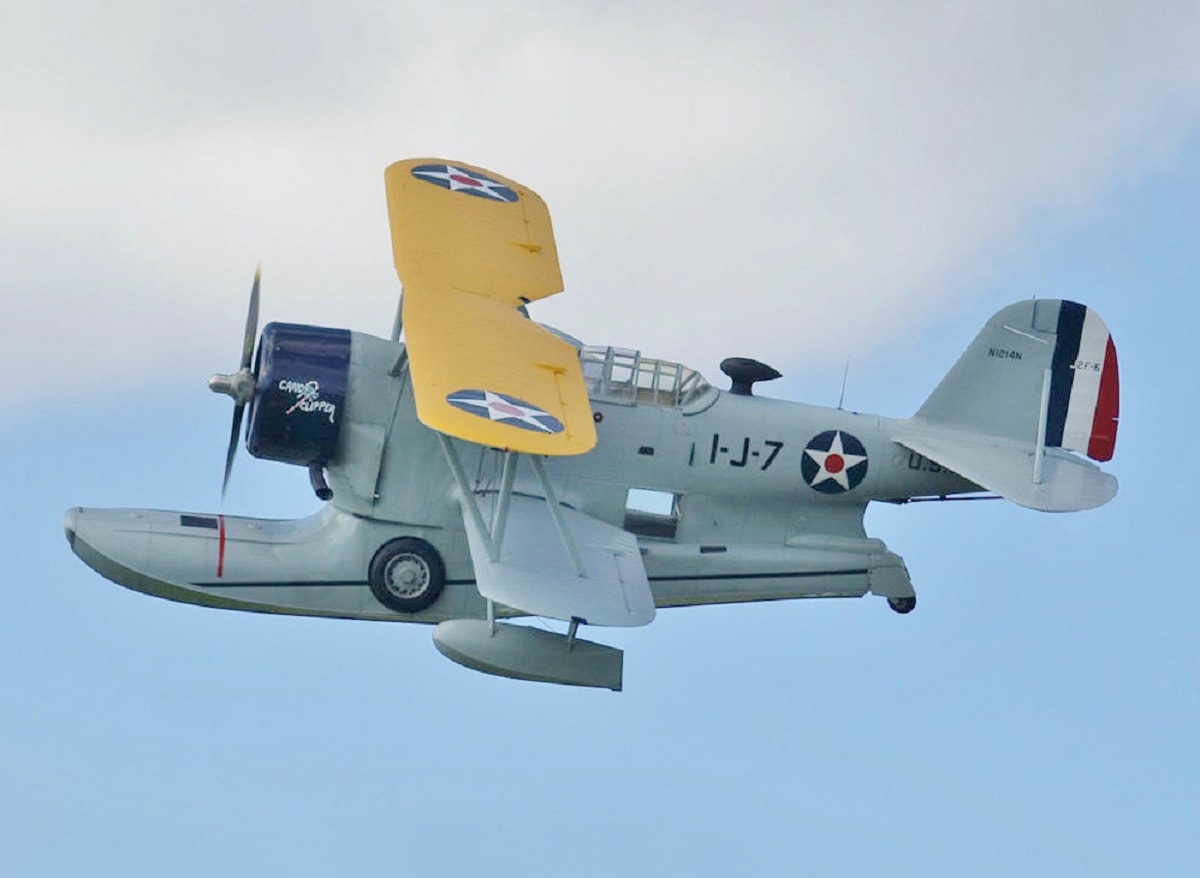 It may not have walked like a duck or quacked like duck—with respect to James Whitcomb Riley—but one Grumman aircraft did sort of fly and was able to land on water, so by those standards the U.S. Navy’s Grumman (Columbia) J2F-6 was still a “Duck.”

The single-engine equal-span, the single-bay amphibious biplane was developed in the 1930s as a flying boat, which was based on the Grover Loening Aircraft Company’s “Air Yacht” that had been developed in the 1920s. It featured a large monocoque central float that also housed the retractable main landing gear, which allowed this Duck to operate from land or water. Navy versions of the aircraft even featured a tail hook for carrier landings.

As a carrier-based utility transport its duties could include observation/scouting, and later for Carrier Onboard Delivery (COD). Grumman and Columbia Aircraft Corporation built a total of 632 Ducks, which were primarily used by the United States Navy, Marines and Coast Guard before and during World War II, where the Ducks were also deployed for transport, photoreconnaissance, rescue, bombing and depth-charging missions.

In its original configuration the aircraft had a crew of two, with the pilot and rear gunner under the canopy, but some variants added a third crew position for an observer or radio operator. In addition, there was room for two passengers or a medical stretcher in the fuselage.

While by no means a fighter, this Duck was still a warbird as noted by one that was used by the U.S. Army Air Forces during the Second World War. In early 1942 members of the 20th Pursuit Squadron in the Philippines managed to repair a damaged Navy J2F and it was used to fly across enemy lines to obtain critical supplies for Bataan and Corregidor. Because the pilots even carried some candy for the nurses, that aircraft earned the nickname “The Candy Clipper.” It was the last aircraft to leave Bataan during the siege.

After the war, eight of the U.S. Navy’s J2F-6s were re-designated as the OA-12 Duck for service with the United States Air Force, which used the planes for air-sea missions. Five of those aircraft were sent to Alaska for duty with the 10th Air Rescue Squadron, while the other three went to an allied country as part of the Mutual Defense Assistance Program.

Ducks, including those that had been previously operated by the U.S. Navy, were supplied to American partners including Argentina, Colombia, Mexico and Peru; while many aircraft were sold off as surplus and used as firefighters and even as air taxis. New York’s Dawn Patrol Seaplane Base used the aircraft to ferry businessmen between Long Island and Manhattan.

Most surviving Ducks are now in military museums around the United States, while a few are maintained in flying condition. The one in the collection of the National Museum of the United States Air Force was delivered to the Coast Guard in June 1945 and sold as surplus a year later. It was used in several films including the 1971 film Murphy’s War, before being donated to the museum. It is painted to represent one of the rescue OA-12s used by the Air Force.