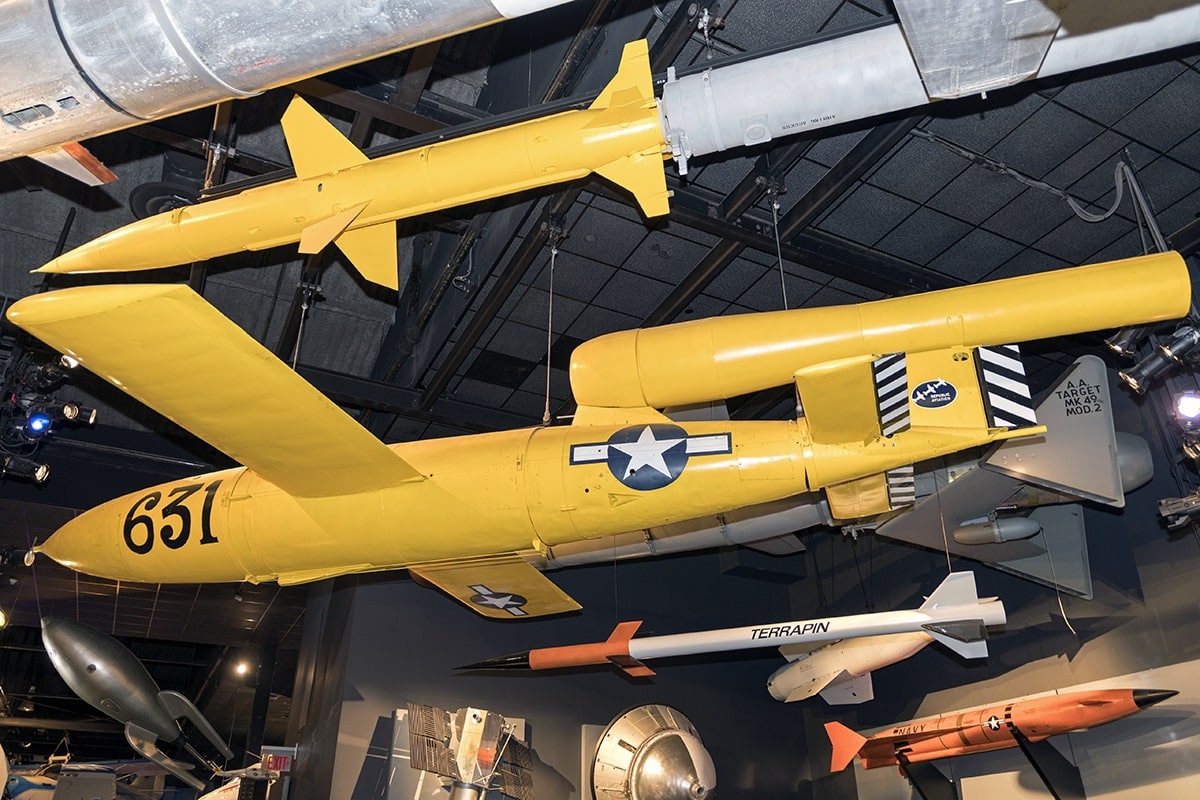 In the final year of World War II, Nazi Germany attempted to offset the growing Allied military advantage by deploying a series of advanced “super weapons” intended to sow terror in Allied soldiers and civilians.

Among the most effective of these weapons was the V-1 cruise missile, a cheap replacement for the strategic bombers that Germany could no longer afford. In 1944 and 1945, the Germans launched some 12,000 V-1 “Buzzbombs” at Allied targets in Britain and the Low Countries, inflicting more than 20,000 casualties and causing extensive damage to buildings and other ground facilities. This onslaught so impressed the Americans that they decided to reverse-engineer the weapon, then employ it en masse against both Germany and Japan.

Using a simple but powerful pulsejet engine developed in the late 1930s, a V-1 could carry an 850-kilogram warhead up to 160 miles, traveling at four hundred miles per hour. The buzzbombs could be intercepted and shot down by Allied fighters, but insufficient numbers could cause major problems for air defenses. Although the Germans waited until mid-1944 to deploy the weapons, their use was not a complete surprise to the Americans.  Early work on an American unmanned, self-propelled bomb began in 1942 as intelligence reports from Germany indicated the development of a new, unmanned long-range bomb. A report of early testing from a Danish naval officer was supplemented by other sources that indicated the broad outlines of the program.

Thus, when the first V-1s began to strike England in June 1944, the Americans were prepared.  Lightly damaged V-1s were rapidly transferred to the United States where their engines could be studied. U.S. researchers reverse-engineered the German jet engine, quickly producing a reliable copy that could be economically manufactured in the vast defense industrial base.

Indeed, unlike with the V-2, the United States appropriated a technology without the direct assistance of German scientists. It is unclear whether the United States gave much consideration to the clear and premeditated violation of German intellectual property rights; the V-1 frame was manufactured by the German firm Fieseler and the engine by Argus Motoren.  The Japanese, perhaps more sensitive to German IP rights, manufactured the pulsejet under license after receiving significant technical assistance, intending to use it to power the Kawanishi Baika jet kamikaze aircraft.

In any case, the development of the JB-2 (as the V-1 copy was dubbed) closely tracked that of the JB-1, a bat-shaped missile built by Northrup. The reverse-engineered German pulsejet performed much better than the JB-1’s General Electric engine, however, and development of the JB-1 was curtailed in preference for the JB-2. Initial testing of both weapons began in late 1944, with the Pentagon quickly ordering mass production of the JB-2 for use against both Germany and Japan. The missile was expected to reach full production by April 1945.

Of course, by late 1944 it had become clear that the war against Nazi Germany would not last deep into 1945. Moreover, the U.S. Army Air Force and the Royal Air Force could already destroy any target in Germany worth the trouble. Thus, plans for using the JB-2 “Loon” shifted to the Pacific theater, where Japan’s ability to resist remained in great question. The United States prepared to launch the missile from air and naval platforms, including flying boats, four-engine strategic bombers, and aircraft carriers. The first Loons were scheduled to arrive in the Pacific region in mid-1945, in preparation for a massive onslaught that would strike targets all over the Japanese home islands.

The strategic logic of using the cruise missiles in the final months of the war isn’t completely clear, given the utter command of the air that the United States enjoyed over Japan in the waning days of the war. The entire strategic reasoning of the V-1, after all, was to strike targets in the United Kingdom that German aircraft could no longer hope to hit without unacceptable losses. The V-1s were not available in sufficient numbers to do real damage to the British industrial economy, itself by 1944 only an annex to the U.S. war machine. Moreover, they lacked the accuracy to cause significant damage to Allied military assets. But by killing people and inflicting terror, the V-1s were to remind the British that the war was still ongoing and that Germany might have the technological means to turn the tide. They also forced the Allies to shift resources to defend against the buzzbombs, including reorienting ground forces on the continent towards the capture of German staging and launch areas. The V-1 had material and psychological effect largely because it forced an expensive Allied reaction.

None of these conditions for success existed in East Asia, where the United States held presumptive dominance. The U.S. Army Air Force began to destroy Japan’s cities in March, and Japanese air and ground forces could do little to prevent the destruction. By mid-1945, the United States had massive qualitative and quantitative advantages over the Japanese in terms of ships and aircraft, to the extent that Japan could not meaningfully resist either air or sea attacks. It is not obvious what kind of military advantage the use of the Loon in mass could have provided the Allies, even if Japan had chosen to continue to resist.

The use of the atomic bomb and the consequent Japanese surrender made the Loon irrelevant to the conclusion of the war. However, the U.S. industry had produced over a thousand missiles, and they would prove invaluable for future testing. Indeed, the Loon provided the foundation of America’s postwar cruise-missile industry. Extensive testing demonstrated that the weapon could be launched from a surfaced submarine, helping to provide a logic for the development of submarine launchers for both cruise and ballistic missiles. Testing of the Loon also accelerated the MGM-1 Matador, a vastly improved version that could travel much farther and that could carry nuclear weapons.

Robert Farley is a Senior Lecturer at the Patterson School of Diplomacy and International Commerce. His work includes military doctrine, national security, and maritime affairs. He blogs at Lawyers, Guns, and Money and Information Dissemination and The Diplomat. Follow him on Twitter:@drfarls.