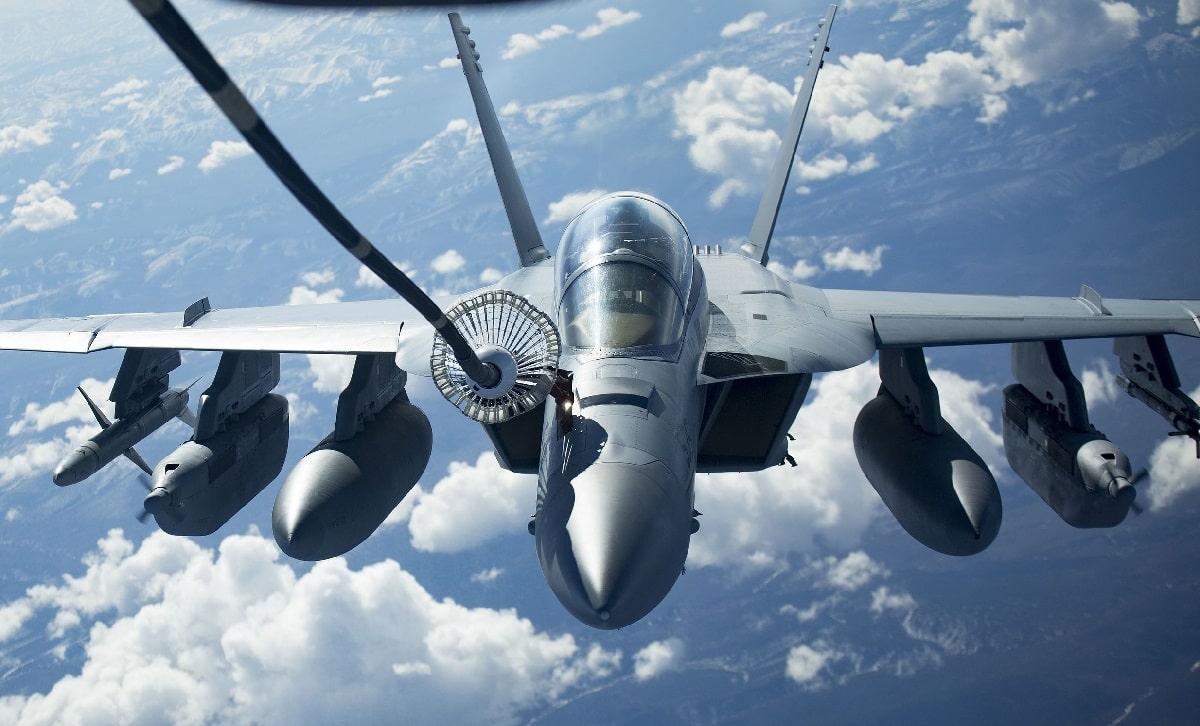 With both Russian and Chinese air defense systems continuing to improve, the United States military has found itself needing to develop new methods for overcoming adversarial air defense networks. The development of increasingly capable stealth aircraft – such as the F-35 Lighting II – is one product of those efforts. But another has been the Navy’s development of the EA-18G Growler electronic attack aircraft.

How the Growler Got Started

Development of the EA-18G Growler began in 2003 when the Navy awarded Boeing with a five-year system development and demonstration (SSD) contract, before a contract for the first four production Growlers was signed in 2006. The Growler was designed to serve as a replacement for the Navy’s fleet of EA-6B Prowler electronic attack aircraft that first entered into operational service in 1971 and was officially retired in 2019.

The Growler first flew in August of 2006, and the first two test aircraft were delivered to the United States Navy in September and November of that year. The first production aircraft was delivered to the Navy in September of 2007, and the first operational Growler arrived at Naval Air Station Whidbey Island in June 2008 before beginning operational evaluation on board the aircraft carrier USS John C. Stennis in October 2008.

The SSD contract for the Growler concluded in 2009 with the aircraft’s initial operational capability when the first electronic attack squadron began operations with the EA-18G.

The Growl in the Growler

The EA-18G Growler is built around the successful and combat-proven F/A-18 series of aircraft, which have served as the U.S. Navy’s primary carrier-based multi-role fighters for many years. This makes the EA-18G Growler significantly faster and more maneuverable than previous electronic attack aircraft, which had been based more on transport aircraft designs. The Growler is powered by a pair of General Electric F414-GE-400 turbofan engines that provide the aircraft with 44,000 pounds of thrust. The EA-18G Growler has a maximum speed of 1,960 km/h – roughly Mach 1.6 – and has a maximum range of 1,570 km when equipped with external fuel tanks.

The EA-16G Growler’s two primary missions are electronic attack (EA) and the suppression of enemy air defenses (SEAD). To accomplish these missions, Growlers are outfitted with a host of advanced electronic warfare systems. Block 1 Growlers are equipped with up to three AN/ALQ-99 radar jamming pods along with an AN/ALQ-218(V)2 receiver and a Raytheon AN/ALQ-227 communications countermeasures system that are mounted in what is typically the F/A-18’s gun bay.

These systems allow the EA-18G Growler to support and protect friendly forces on the ground, in the air, and at sea by jamming enemy radar and providing electronic protection. In addition, the Growler is able to provide electronic intelligence, surveillance, and reconnaissance (ISR) data to other friendly aircraft, and can maintain uninterrupted radio-communications in heavily jammed environments with its Interference Cancelation System. The Growler’s ALQ-227 Communications Countermeasures Set allow the EA-18G to not only digitally jam enemy communications over a broad frequency but also to locate, record, and play back those communications.

And She Can Fight, Too

While the EA-18G Growler’s primary missions are electronic attack and suppression of enemy air defenses, the electronic attack aircraft are also capable of mounting weaponry for directly engaging enemy forces. When operating in a surveillance-only setup, the Growler is typically armed with two AIM-120 air-to-air missiles for self-defense against enemy aircraft. When deployed for stand-off jamming and escort jamming operations, EA-18Gs are equipped with two AGM-88 high-speed anti-radiation missiles (HARMs) along with the two AIM-120 missiles. In situations when EA and SEAD missions are not required, the EA-18G can be outfitted primarily for strike missions and will mount two AGM-88 HARM missiles, two AIM-120s, and two AGM-154 joint standoff weapons (JSOWs).

While the United States Navy remains the primary operator of the EA-18G Growler, it is not alone in flying the aircraft. In 2014, Boeing was awarded a contract for 12 Growlers under a Foreign Military Sales agreement with the Royal Australian Air Force (RAAF). The EA-18G Growler achieved initial operational capability with the RAAF in April 2019, and the U.S. Navy and Australia have cooperated in the development of new radar jamming equipment for the Growler.