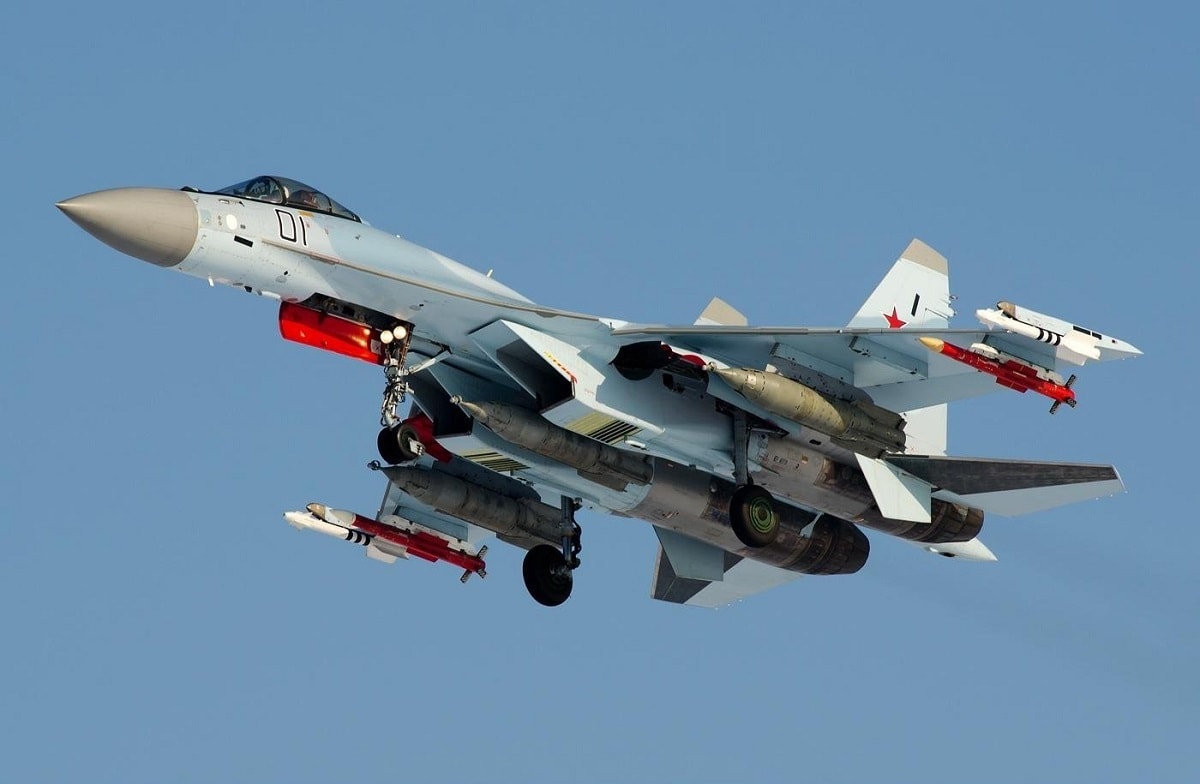 The Sukhoi Su-35 Flanker-E is the top Russian air-superiority fighter in service today, and represents the pinnacle of fourth-generation jet fighter design. It will remain so until Russia succeeds in bringing its fifth-generation PAK-FA/Su-57 stealth fighter into large-scale production.

Distinguished by its unrivaled maneuverability, most of the Su-35’s electronics and weapons capabilities have caught up with those of Western equivalents, like the F-15 Eagle. But while it may be a deadly adversary to F-15s, Eurofighters and Rafales, the big question mark remains how effectively it can contend with fifth-generation stealth fighters such as the F-22 and F-35.

The Su-35 is an evolution of the Su-27 Flanker, a late Cold War design intended to match the F-15 in concept: a heavy twin-engine multirole fighter combining excellent speed and weapons loadout with dogfighting agility.

An Su-27 stunned the audience of the Paris Air Show in 1989 when it demonstrated Pugachev’s Cobra, a maneuver in which the fighter rears its nose up to 120-degree vertical—but continues to soar forward along the plane’s original attitude.

Widely exported, the Flanker has yet to clash with Western fighters, but did see air-to-air combat in Ethiopian service during a border war with Eritrea, scoring four kills against MiG-29s for no loss. It has also been employed on ground attack missions.

The development history of the Su-35 is a bit complicated. An upgraded Flanker with canards (additional small wings on the forward fuselage) called the Su-35 first appeared way back in 1989, but is not the same plane as the current model; only fifteen were produced. Another upgraded Flanker, the two-seat Su-30, has been produced in significant quantities, and its variants exported to nearly a dozen countries.

The current model in question, without canards, is properly called the Su-35S and is the most advanced type of the Flanker family. It began development in 2003 under the Komsomolsk-on-Amur Aircraft Production Association (KnAAPO), a subcontractor of Sukhoi. The first prototypes rolled out in 2007 and production began in 2009.

The Flanker family of aircraft is supermaneuverable—meaning it is engineered to perform controlled maneuvers that are impossible through regular aerodynamic mechanisms. In the Su-35, this is in part achieved through use of thrust-vectoring engines: the nozzles of its Saturn AL-41F1S turbofans can independently point in different directions in flight to assist the aircraft in rolling and yawing. Only one operational Western fighter, the F-22 Raptor, has similar technology.

This also allows the Su-35 to achieve very high angles-of-attack—in other words, the plane can be moving in one direction while its nose is pointed in another. A high angle of attack allows an aircraft to more easily train its weapons on an evading target and execute tight maneuvers.

Such maneuvers may be useful for evading missiles or dogfighting at close ranges—though they leave any aircraft in a low-energy state.

The Flanker-E can achieve a maximum speed of Mach 2.25 at high altitude (equal to the F-22 and faster than the F-35 or F-16) and has excellent acceleration. However, contrary to initial reports, it appears it may not be able to supercruise—perform sustained supersonic flight without using afterburners—while loaded for combat. Its service ceiling is sixty thousand feet, on par with F-15s and F-22s, and ten thousand feet higher than Super Hornets, Rafales and F-35s.

The Su-35 has expanded fuel capacity, giving it a range of 2,200 miles on internal fuel, or 2,800 miles with two external fuel tanks. Both the lighter titanium airframe and the engines have significantly longer life expectancies than their predecessors, at six thousand and 4,500 flight hours, respectively. (For comparison, the F-22 and F-35 are rated at eight thousand hours).

The Flanker airframe is not particularly stealthy. However, adjustments to the engine inlets and canopy, and the use of radar-absorbent material, supposedly halve the Su-35’s radar cross-section; one article claims it may be down to between one and three meters. This could reduce the range it can be detected and targeted, but the Su-35 is still not a “stealth fighter.”

The Su-35 has twelve to fourteen weapons hardpoints, giving it an excellent loadout compared to the eight hardpoints on the F-15C and F-22, or the four internally stowed missiles on the F-35.

At long range, the Su-35 can use K-77M radar-guided missiles (known by NATO as the AA-12 Adder), which are claimed to have range of over 120 miles.

For shorter-range engagements, the R-74 (NATO designation: AA-11 Archer) infrared-guided missile is capable of targeting “off boresight”—simply by looking through a helmet-mounted optical sight, the pilot can target an enemy plane up sixty degrees away from where his plane is pointed. The R-74 has a range of over twenty-five miles, and also uses thrust-vectoring technology.

The medium-range R-27 missile and the extra long-range R-37 (aka the AA-13 Arrow, for use against AWACs, EW and tanker aircraft) complete the Su-35’s air-to-air missile selection.

Additionally, the Su-35 is armed with a thirty-millimeter cannon with 150 rounds for strafing or dogfighting.

The Flanker-E can also carry up to seventeen thousand pounds of air-to-ground munitions. Historically, Russia has made only limited use of precision-guided munitions (PGMs) compared to Western air forces. However, the capability for large-scale use of such weapons is there, if doctrine and munition stocks accommodate it.

The Su-35’s most critical improvements over its predecessors may be in hardware. It is equipped with a powerful L175M Khibiny electronic countermeasure system intended to distort radar waves and misdirect hostile missiles. This could significantly degrade attempts to target and hit the Flanker-E.

The Su-35’s IRBIS-E passive electronically scanned array (PESA) radar is hoped to provide better performance against stealth aircraft. It is claimed to able to track up to thirty airborne targets with a Radar-cross section of three meters up to 250 miles away—and targets with cross-sections as small 0.1 meters over fifty miles away. However, PESA radars are easier to detect and to jam than the Active Electronically Scanned Array (AESA) radars now used by Western fighters. The IRBIS also has an air-to ground mode that can designate up to four surface targets at time for PGMs.

Supplementing the radar is an OLS-35 targeting system that includes an Infra-Red Search and Track (IRST) system said to have a fifty-mile range—potentially a significant threat to stealth fighters. 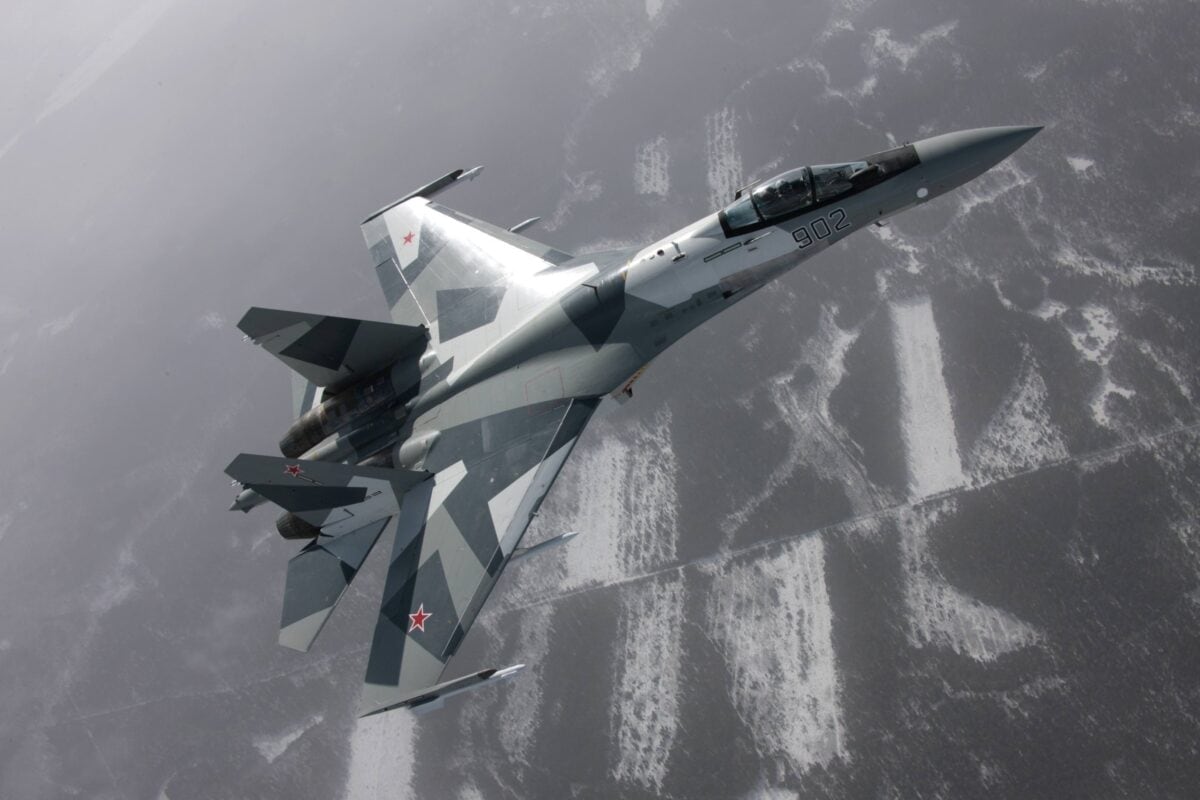 Currently, the Russian Air Force operates only forty-eight Su-35s. Another fifty were ordered in January 2016, and will be produced at a rate of ten per year. Four Su-35s were deployed to Syria this January after a Russian Su-24 was shot down by a Turkish F-16. Prominently armed with air-to-air missiles, the Su-35s were intended to send a message that the Russians could pose an aerial threat if attacked.

China has ordered twenty-four Su-35s at a cost of $2 billion, but is thought unlikely to purchase more. Beijing’s interest is believed to lie mostly in copying the Su-35’s thrust-vector engines for use in its own designs. The Chinese PLAAF already operates the Shenyang J-11, a copy of the Su-27.

Cost estimates for the Su-35 have run between $40 million and $65 million; however, the exports contracts have been at prices above $80 million per unit.

Against the Fifth Generation

The Su-35 is at least equal—if not superior—to the very best Western fourth-generation fighters. The big question, is how well can it perform against a fifth-generation stealth plane such as the F-22 or F-35?

The maneuverability of the Su-35 makes it an unsurpassed dogfighter. However, future aerial clashes using the latest missiles (R-77s, Meteors, AIM-120s) could potentially take place over enormous ranges, while even short-range combat may involve all-aspect missiles like the AIM-9X and R-74 that don’t require pointing the aircraft at the target. Nonetheless, the Su-35’s speed (which contributes to a missile’s velocity) and large load-carrying abilities mean it can hold its own in beyond-visual-range combat. Meanwhile, the Flanker-E’s agility and electronic countermeasures may help it evade opposing missiles.

The more serious issue, though, is that we don’t know how effective stealth technology will be against a high-tech opponent. An F-35 stealth fighter that gets in a short-range duel with a Flanker-E will be in big trouble—but how good a chance does the faster, more-maneuverable Russian fighter have of detecting that F-35 and getting close to it in the first place?

As the U.S. Air Force would have it, stealth fighters will be able to unleash a hail of missiles up to one hundred miles away without the enemy having any way to return fire until they close to a (short) distance, where visual and IR scanning come into play. Proponents of the Russian fighter argue that it will be able to rely upon ground-based low-bandwidth radars, and on-board IRST sensors and PESA radar, to detect stealth planes. Keep in mind, however, that the former two technologies are imprecise and can’t be used to target weapons in most cases.

Both parties obviously have huge economic and political incentives to advance their claims. While it is worthwhile examining the technical merits of these schools of thought in detail, the question will likely only be resolved by testing under combat conditions. Furthermore, other factors such as supporting assets, mission profile, pilot training and numbers play a large a role in determining the outcomes of aerial engagements.

The Su-35 may be the best jet-age dogfighter ever made and a capable missile delivery platform—but whether that will suffice for an air-superiority fighter in the era of stealth technology remains to be seen.