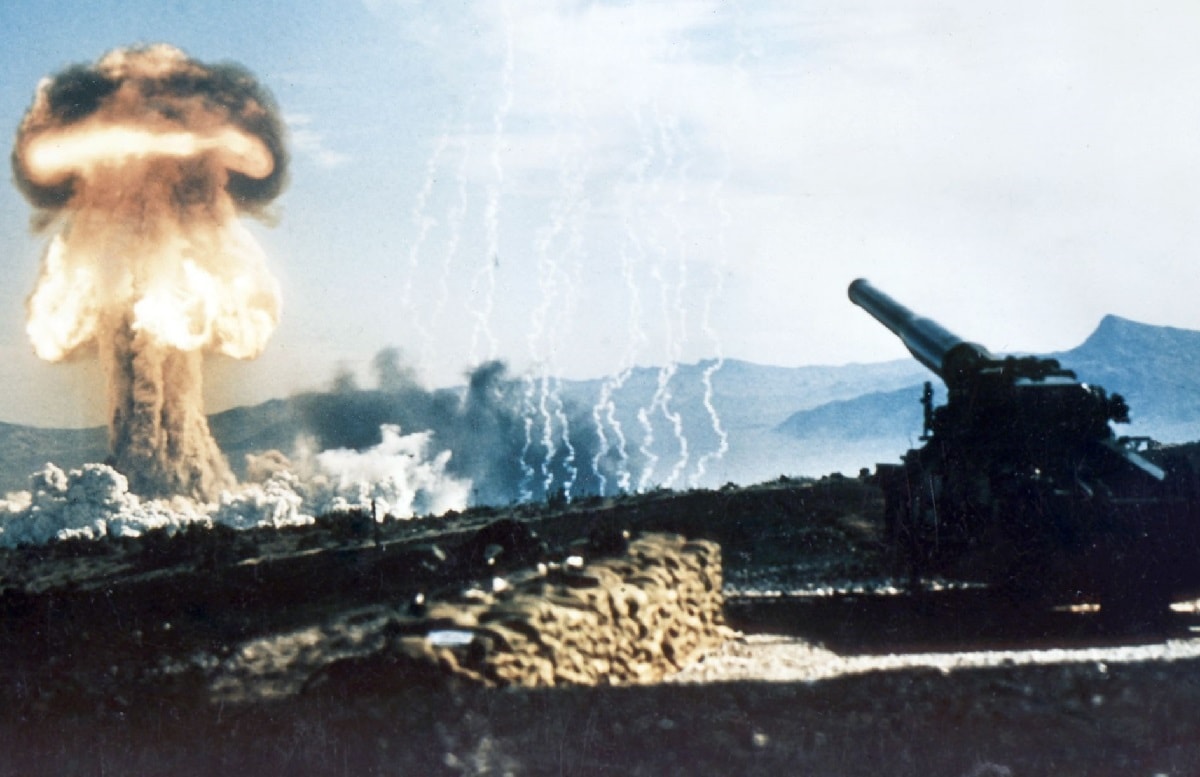 Today the use of nuclear weapons is a near-unthinkable military option of last resort. But back in the 1950s, that norm had yet to be established. The U.S. Army believed then that in the event of war with the Soviet Union, tactical nukes would be landing left and right across the battlefield. It, therefore, fielded the “Pentomic” division to fight on the anticipated nuclear hellscape. It even gave battalion-level commanders access to short-range nuclear shells, which risked blasting the units that fired them.

The motive behind the Pentomic divisions may have been more political than military. In the 1950s, the Eisenhower administration believed nuclear weapons were so powerful that conventional ground troops would be rendered irrelevant. The doctrine of “massive retaliation” dictated that the United States would respond to any Soviet attack with a full-scale nuclear attack. Indeed, Eisenhower even considered going nuclear to prevent Vietnamese and Chinese Communist forces from securing battlefield victories that were hardly direct threats to U.S. national security.

Because the U.S. Air Force and Navy had the majority of nuclear weapons systems, they received the lion’s share of military funding. Under the “New Look” defense budget of 1955, the Army was considered a mere garrison force to protect nuclear weapons facilities. The infantry branch in particular fell from a height of 250,000 personnel during the Korean War to around 130,000.

Eager to get a bigger cut, the U.S. Army decided it needed to field a force fit for the nuclear age. At the time, U.S. infantry divisions still had the “triangular” force structure used in World War II, with units organized in threes: three companies in a battalion, three battalions in a regiment, three regiments in a division, and so forth. The battalions in each regiment were supposed to stick close together for tactical, logistical, and communications support. However, military theorists worried that large regiments would make ideal targets for nuclear attacks. To their thinking, numerous smaller, independent units would be more survivable.

Thus the Army coined the Pentomic division, so named because it was based around five battalions—renamed “battle groups”—each composed of five infantry companies. A sixth support company in the battle group included radars, a battery of 4.2-inch mortars, 106-millimeter antitank recoilless rifles, and eventually the U.S. Army’s first antitank missiles, the French-made SS-10. The infantry squads were increased to eleven men each and issued squad-level radios for the first time, as well as new M14 semiautomatic rifles with twenty-round magazines that could be switched to (inaccurate) automatic fire.

The Pentomic divisions possessed no regimental level of organization. Instead, armor, artillery, and logistical elements were detached from the division to reinforce each 1,400-man battle group. By 1960, the Pentomic divisions had five direct support artillery battalions, with one battery apiece of 105- and 155-millimeter howitzers, as well as a five-company tank battalion. These would be split up to support battle groups on the frontline, allowing the infantry units to remain self-sufficient even if they were cut off from support by radiation and advancing Soviet tanks.

The three Airborne Divisions then active were the first to convert to the Pentomic organizational structure in 1957, and all the active Infantry Divisions followed in 1958. The armored branch did not undergo conversion, as it already had a smaller and more flexible organization. In general, there was not much enthusiasm for the Pentomic system, as each division became smaller and lost much of the historical identity invested in the absent regimental units.

The Army’s first nuclear weapon system, the M65 280-millimeter cannon, lacked mobility. But soon rockets and lighter nuclear artillery shells made nuclear firepower available to divisional commanders in the Pentomic division’s general support battalion. World War II-era eight-inch M115 howitzers were issued W33 nuclear-tipped shells with a yield of up to forty kilotons. These could be lobbed up to ten miles away. Meanwhile, truck-mounted MGR-1 Honest John rocket systems could strike targets fifteen to thirty miles distant, depending on the model. The unguided 760-millimeter rockets were prone to scattering the length of a couple of football fields off target, but a high level of precision wasn’t a priority when delivering thirty-kiloton nuclear warheads.

The ultimate upgrade to the Pentomic division came in 1961 when battle groups received the M28 and M29 Davy Crockett towed recoilless guns. These fired W54 .01-kiloton nuclear warheads that weighed seventy-six pounds. The miniature nukes emitted enough radiation to immediately kill everyone within five hundred feet of the point of detonation, and cause blindness or slow death in a much wider radius. But the 120-millimeter M28 had a maximum range of just slightly over a mile, which meant the crew of three could easily be affected by the radiation from their own weapon. The 155-millimeter M29 variant had double the range, making it somewhat more practical. Placing so many nuclear weapons in the hands of frontline battle groups multiplied the chance of unauthorized use, and the more than two thousand rounds produced increased the likelihood of the man-portable warheads being lost or stolen.

In battle, a Pentomic division was supposed to keep its battle groups spread out in defensive islands so that no more than one could be wiped out by a single nuclear strike. Pre-sighted Davy Crocketts deployed in Europe would irradiate key chokepoints, killing Soviet tank crews inside their vehicles and preventing other units from advancing through the area. When the division went on the attack, nuclear artillery would be used to blast holes through enemy lines which Pentomic battle groups could exploit.

Eventually, the Army evaluated the performance of the new divisions—and realized they were terrible. Five reinforced battalions simply weren’t as effective as three full regiments, especially in conventional warfare. Although the Pentomic divisions theoretically had 33 percent more troops in frontline roles, they often needed to shift those troops back to logistical tasks because the support services were undermanned. The Pentomic battle groups also lacked battlefield mobility in the form of armored all-terrain transport. Eventually, divisional transport units received M113 APCs and H-34 helicopters in order to provide mechanized or airborne movement to one or two battle groups at a time—out of five.

Despite modernized communication systems, the Pentomic division also posed command-and-control problems. The colonel in charge of a battle group had to direct five to nine companies at a time once typical supporting units were accounted for, rather than the three to five a battalion commander would normally have to deal with. This was more than most officers could efficiently keep track of. The lack of a regimental organization also distorted the Army’s rank structure. The armies of Australia, Spain, Turkey and West Germany all considered adopting the Pentomic structure—and all gave up on it within a few years.

Most importantly, under President Kennedy, the Pentagon switched to a doctrine of “flexible response,” which did not automatically assume escalation to nuclear warfare. This way of thinking was encouraged by improvements in Soviet nuclear capabilities. American military planners were horrified to discover from war games that even “limited” use of nuclear weapons would cause massive devastation to Europe, and so the Army reoriented itself towards winning conventional conflicts, as well as counterinsurgency in developing countries.

The Pentomic divisions fortunately never saw combat, though they came close to doing so in the Cuban Missile Crisis. After only five years, the Army began transitioning in 1962 to the ROAD division, which largely reverted to a triangular organization. The Davy Crocketts were withdrawn from operational units by 1968. While the Army retained nuclear artillery shells for several more decades, the passing of the Pentomic division marked the turning point when the Pentagon realized modern war wouldn’t necessarily involve a liberal sprinkling of little mushroom clouds—an epiphany we should all be thankful for.