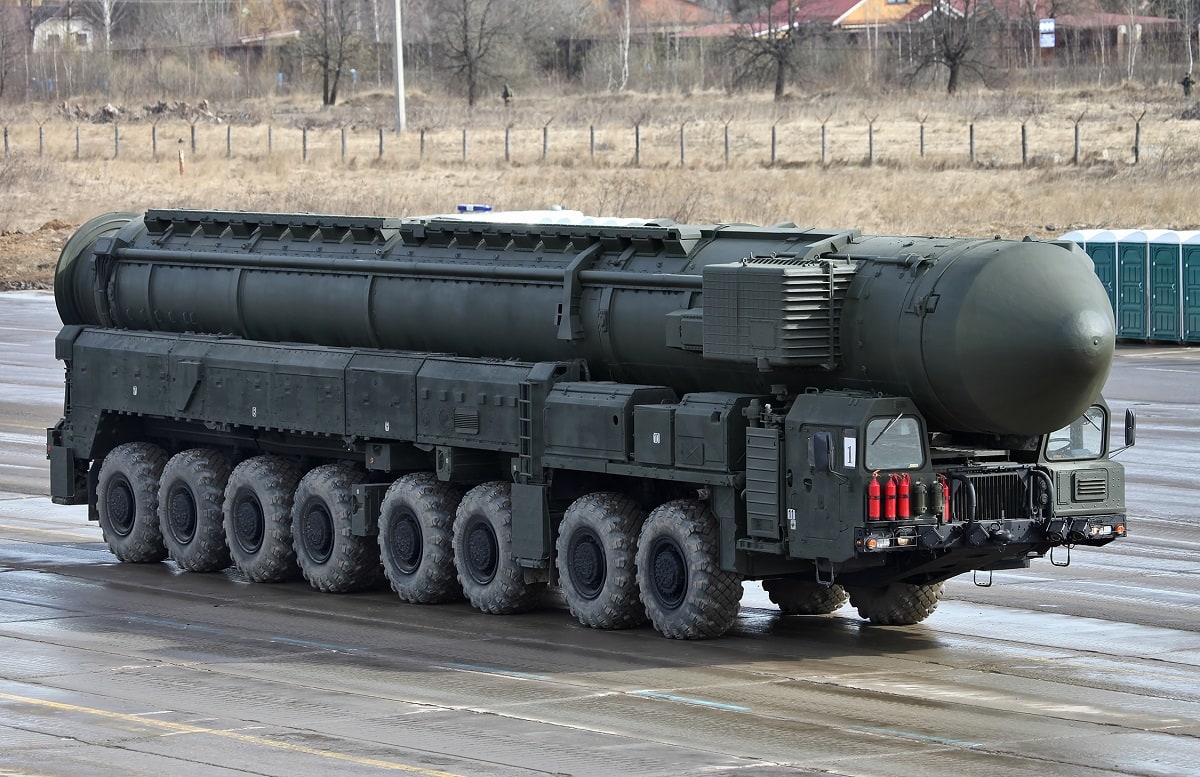 On July 19, 2018 the Kremlin released a flurry of videos showing off various nuclear weapon systems under development ranging from the RS-28 Satan 2 ballistic missile, Kinzhal hypersonic missiles, and even an ocean-spanning nuclear torpedo designed to smash coastal metropolises with tsunami waves of irradiated water.

However, one item that didn’t make the cut was a five-year project to develop a nuclear-missile launching train straight out of a James Bond movie—a successor to a Soviet “Ghost Train” that did serve operationally.

The concept of railway mobile nukes went back several decades, founded on the idea that a moving nuclear delivery system is much harder for an enemy to target with a preemptive strike, and thus provides stronger deterrence. This principle has made submarines loaded with ballistic missiles the most effective form of nuclear deterrence.

Of course, submarines are hard to track because they can rove vast oceanic expanses while submerged. For the nuclear train, concealment would come from blending in with civilian rail traffic as they wander the railways in perpetual motion. Sure, a preemptive attack might hit some of the doomsday trains—but it would be difficult to hunt down all of them and divert strikes otherwise dedicated to blowing up cities and military bases.

In the 1980s the Soviets finally developed the RT-23 Molodets intercontinental ballistic missile (ICBM)—shortened from earlier ICBMs to fit inside a standard train wagon. The resulting SS-24 missile (codenamed Scalpel by NATO) was 2.4-meters in diameter, used solid fuel for relatively rapid launch, and could strike targets 6,800 miles away thanks to its three-stage rocket boosters. There was also a silo-based variant. The 104-ton missiles were packed with ten 550-kiloton nuclear warheads which separated to hit different targets on reentry.

The trains were pulled by three standard DM-62 diesel locomotives, and came with a command and control, support, and a tanker wagon with fuel and petroleum-oil lubricants. There was also food enough for twenty-eight days. There were also three missile-laden wagons—disguised to resembled refrigerated wagons, down to false side doors. However, the missiles weighed 130 tons, necessitating reinforced steel wheels. These tended to tear up the rails and might have made the trains easier to identify (though this is contested.)

For launch, the RT-23 would have to stop at one of two hundred specially-constructed firing points along the rail system, shove aside overhanging power cables with a special device, and pop open the roofs of the missile trains. To avoid frying the train with rocket exhaust, the Molodets used a ‘cold-launch’ system: a powder charge propelled the missile twenty meters into the air, then a thruster tilted the missile away from the train before its rocket boosters finally ignited.

In the end, a total of twelve trains were built in Ukraine and active between 1987 and 2002 in three divisions active in Kostroma, Perm and Gladkaya. U.S. intelligence tried to track the movements of the disguised trains via satellite, but with only partial success. In fact, the Pentagon developed its own nuclear-missile train, the Peacekeeper Rail Garrison. Two prototypes disguised to resemble an ordinary rail cars were developed, but the end of the Cold War canceled plans to deploy fifty.

After the dissolution of the Soviet Union, sixty-two RT-23s briefly belonged to Ukraine before being relinquished to Russian control in 1994. The Ghost Trains were finally retired between 2003 and 2005, though two are on display as museum exhibits.

However, the Pentagon’s development of Ballistic Missile Defense and a program called Prompt Global Strike, designed to give the capability to precisely strike any location on the planet within an hour, caused Moscow to grow paranoid that the United States was acquiring the capability to wipe out the Russian arsenal with a preemptive strike, while counting on the missile defense to mop up any survivors. (In reality, U.S. missile defense are nowhere near being that reliable.) This apparently prompted Russia’s recent massive investment in improved nuclear weapon delivery systems.

In 2012, the Moscow Institute of Thermal Technology began developing a successor to the RT-23 called the RS-27 or BZhRK Barguzin, named after the violent winds of Lake Baikal, with schematics approved by 2014.

The new Ghost Train would use much lighter RS-24 Yars missile that weighed only fifty-four tons, and carried only four nuclear warheads. The new system therefore could use standard train wagons with regular wheels and mount six ballistic missiles instead of three. The Yars can soar up to twenty times the speed of sound, and can perform evasive maneuvers and deploy decoys to evade ballistic missile interceptors.

The Barguzin was to have a crew of seventy, including “dozens of officers,” and would be capable of launching from anywhere on the railway line. The wagons would be protected by electronic countermeasures, and supposedly could “resist a nuclear explosion only several hundred meters away.” Defense officials boasted the new death train would ‘restore a ground triad’ including fixed missile silos, truck-mounted mobile ballistic missiles, and rail-mounted weapons.

In 2016 and 2017 the Barguzin underwent several test launches, with service entry planned for 2019—but in reality, the bottom had fallen out of the program’s funding in 2014 as Russia’s economy contracted due to international sanctions and a fall in oil prices. In December 2017, Russian newspapers revealed that the missile train had been left out of the ten-year GPV state armament plan, canceled to free up funding for more critical nuclear weapon programs—though ostensibly the Barguzin project could be revived promptly should circumstances change.

Why the change in heart? In fact, many Russian commentators told the press they found the train project absurdly dated—including the director of the institute developing it.

There are a number of big problems with having nukes rolling about the country on rail—starting with their exposure to potential terrorist attacks, necessitating expensive security procedures. Rails, furthermore, are not particularly difficult to destroy, and can be obstructed by snowfall. Supplying a moving missile unit, and developing the logistical facilities to do so, would also prove highly expensive.

Robert Beckhusen furthermore points out that New START treaty limitations on the number of actively deployed nuclear weapons would likely force the trains to remain at their facilities until the spike of tensions preceding a war. This means the trains might not even make it out of their depots in the event of the sort of surprise attack they are meant to deter against.

Basically, though nuclear-missile armed trains might be difficult to track, they come with a lot of costly limitations that leave them inferior to extent nuclear weapons. Moscow may be looking for redundancy in its ability to produce a retaliatory nuclear holocaust, but the Barguzin was ultimately deemed too dated and expensive given a constricted defense budget. Indeed, in the last year Moscow has also canceled its RS-26 Rubezh ICBM system and basically put its much-hyped Su-57 stealth fighter program on hold for at least a decade.

However, the nuclear-missile launching train may not be permanently off the world stage; in December 2015, China tested a train-launched Dongfeng-41 (East Wind) ICBM. Supposedly, the train may have been modeled on the Soviet-era RT-23.