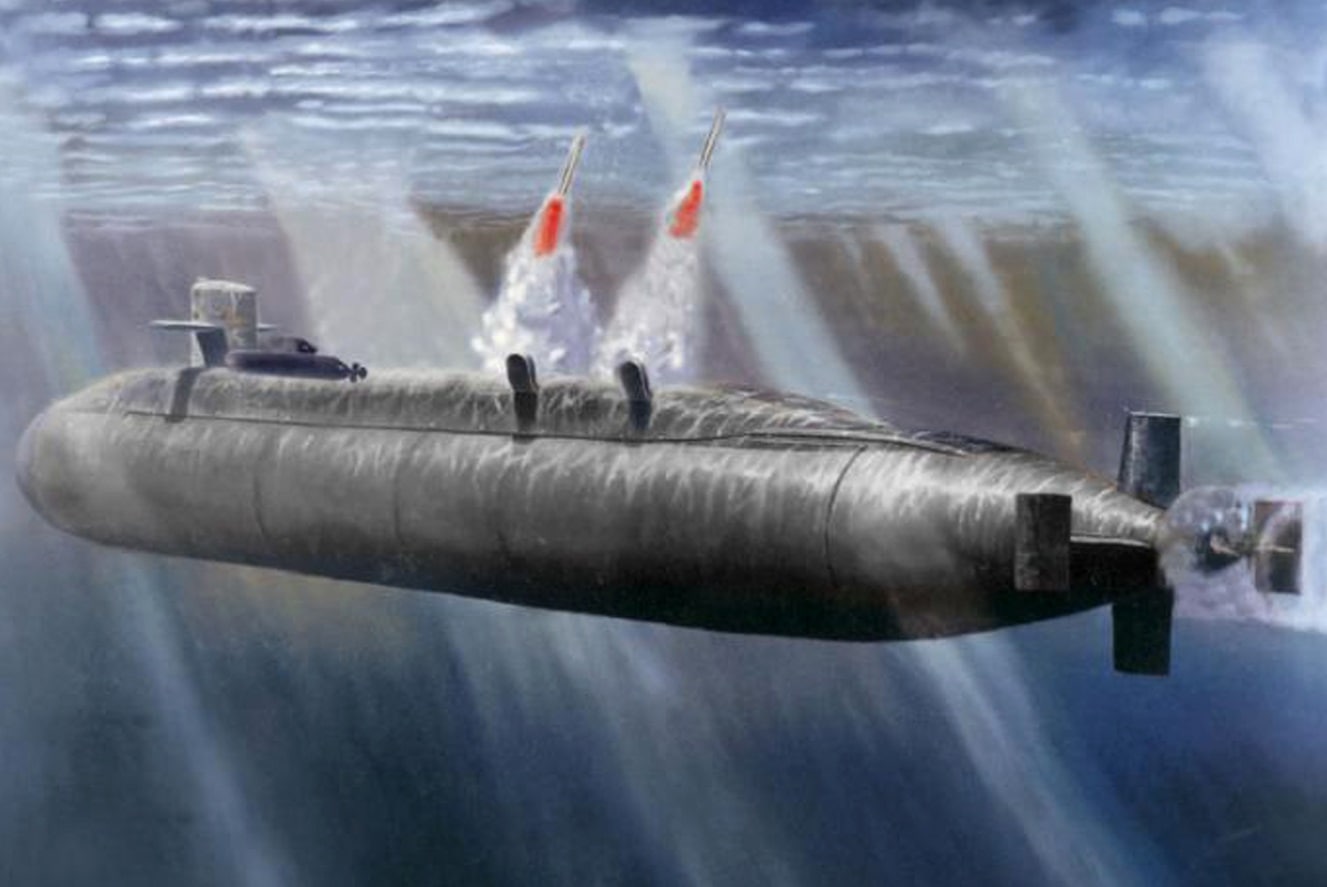 030814-N-0000X-003 Puget Sound Naval Shipyard, Wash. (Aug. 14, 2003) -- Illustration of USS Ohio (SSGN 726) which is undergoing a conversion from a Ballistic Missile Submarine (SSBN) to a Guided Missile Submarine (SSGN) designation. Ohio has been out of service since Oct. 29, 2002 for conversion to SSGN at Puget Sound Naval Shipyard. Four Ohio-class strategic missile submarines, USS Ohio (SSBN 726), USS Michigan (SSBN 727) USS Florida (SSBN 728), and USS Georgia (SSBN 729) have been selected for transformation into a new platform, designated SSGN. The SSGNs will have the capability to support and launch up to 154 Tomahawk missiles, a significant increase in capacity compared to other platforms. The 22 missile tubes also will provide the capability to carry other payloads, such as unmanned underwater vehicles (UUVs), unmanned aerial vehicles (UAVs) and Special Forces equipment. This new platform will also have the capability to carry and support more than 66 Navy SEALs (Sea, Air and Land) and insert them clandestinely into potential conflict areas. U.S. Navy illustration. (RELEASED)

Back in 2010, the concept of great power competition – and particularly as it relates to the intensifying strategic rivalry between the United States and China in the Western Pacific – that is today so pervasive in Washington had not yet emerged as an all-consuming focus of American foreign policy.

Former President George W. Bush, during his presidential campaign in 2000, may well have altered this reality had events played out differently; the former President pushed back against the Clinton administration’s labeling of the U.S.-China relationship as one of strategic partnership and instead framed it as one defined by strategic competition. Fateful events would alter the administration’s focus, however, and a policy in accordance with this label never manifested.

By 2010, that situation remained unchanged.

The United States was still focused more on its enduring conflicts in the Middle East and on its fight against global terrorism than on strategic competition with near peer rivals. Only a year earlier, the Obama administration had announced a surge of additional U.S. troops into Afghanistan, and while U.S. forces were on their way out of Iraq, in 2010 some still remained. And in a few years, a new threat would emerge that would ensure that the United States maintained a heavy focus on the Middle East. Indeed, around this time some members of the administration were chastising the military for devoting too much attention on preparing for potential future great power conflicts at the expense of the wars the country was currently fighting.

Even so, the writing was perhaps on the wall that an intensifying rivalry with China was stirring. The Obama administrations announcement of America’s “pivot” to Asia – even if it did not bring the immediate or substantial changes that some may have hoped for – at least indicated an intent to devote more attention and resources to the region, and shortly thereafter the Department of Defense began actively contemplating its own strategy for dealing with pacing competitors.

In 2010, though, a U.S. military deployment took place that – while itself relatively minor – may have been indicative of the nascent rivalry that was brewing between the United States and China when the U.S. Navy surfaced three missile-carrying submarines throughout the Indo-Pacific.

In late June of 2010, the United States surfaced nearly simultaneously three Ohio-class submarines. The nuclear-powered Ohio-class of SSBNs first began development in 1974 as part of the Navy’s efforts to improve the capabilities of its undersea strategic deterrent fleet, and its development coincided with the Navy’s development of an improved, longer-range submarine-launched ballistic missile (SLBM) that would eventually come to be known as the Trident. The lead vessel of the class – the USS Ohio was commissioned in 1981, and since then Ohio-class SSBNs have formed the core of the United States’ undersea leg of its nuclear triad, representing its most survivable retaliatory nuclear strike capability.

The three Ohio-class submarines surfaced in the Indo-Pacific on June 28 2010, however, were not a part of the Navy’s undersea deterrent fleet. Instead, these three had been modified to carry and launch Tomahawk cruise missiles. The New START treaty signed by the United States and Russia in 2002 limited the number of U.S. strategic missile submarines to 14, and with a total of 18 Ohio-class SSBNs in operation, the U.S. Navy made the decision to convert four of the vessels to carry non-nuclear munitions. The four oldest Ohio-class SSBNs – the USS Ohio, the USS Michigan, the USS Florida, and the USS Georgia – were all modified and redesignated as guided-missile submarines (SSGNs).

On June 28, 2010, the Navy surfaced three of the four SSGNs across the Indo-Pacific: the USS Ohio appears in Subic Bay in the Philippines, the USS Michigan popped up in Pusan, South Korea, and the USS Florida arrived at the joint U.S.-British naval base on Diego Garcia. While U.S. defense officials denied that the vessels’ appearance across the theater was an attempt to signal China, their arrival did come amid increasing concern about China’s growing military capabilities, particularly in the maritime realm.

The arrival of the three SSGNs in the Indo-Pacific was not in and of itself a tremendously significant event, and their deployment to the theater was not widely reported on at the time. Their arrival did, however, possibly foreshadow the coming military rivalry in the region that today is a major issue.