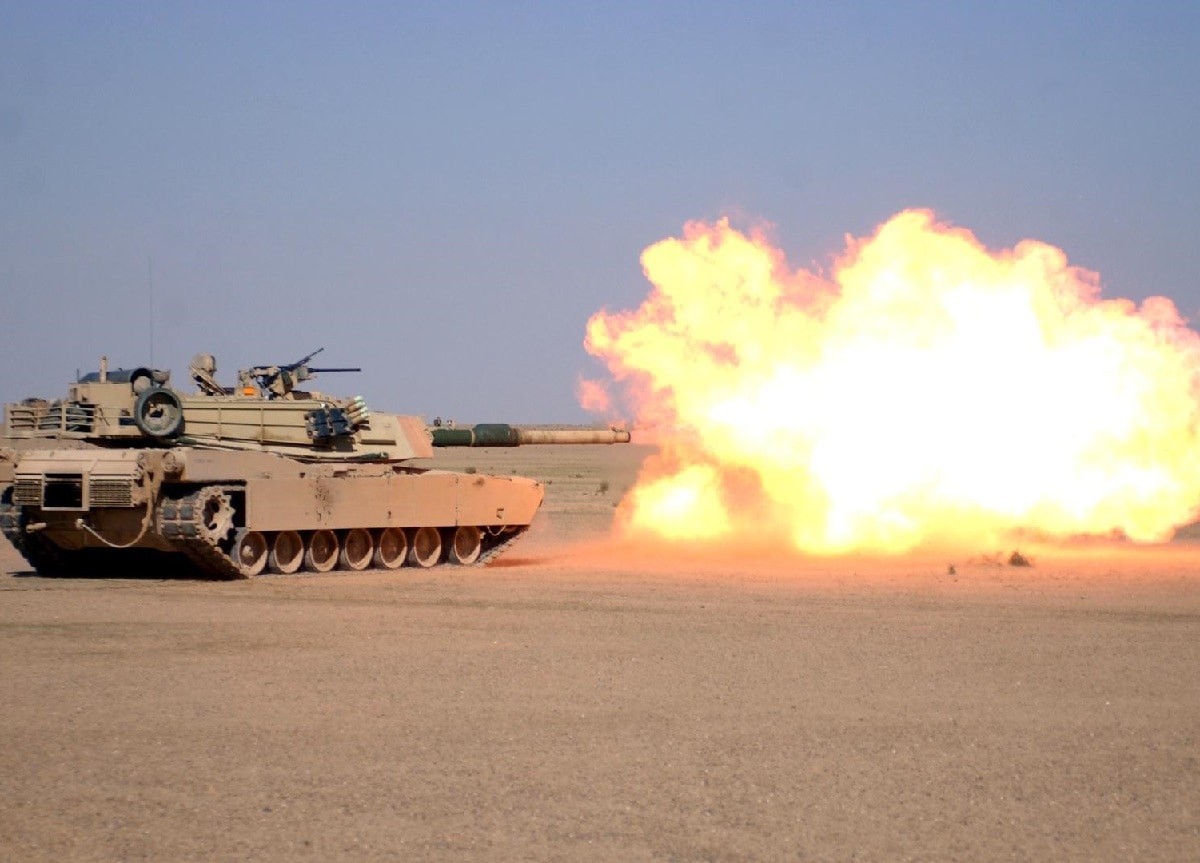 In the 1990s, the U.S. Army was developing a new series of tank ammunition for the Abrams main battle tanks. The new round, designated XM943 Smart Target Activated Fire and Forget (STAFF), was to have lethality far beyond what was possible with conventional ammunition: it would fly over enemy tanks and detonate above them, projecting an explosively formed projectile through the top armor to destroy them. Some reports suggest that the round could have an astounding 11.5:1 kill ratio against an enemy armor force.

But the program fell victim to post-Cold War budget cuts and was canceled in the early 2000s. It begs the question: why was such a theoretically amazing round canceled? Could it be as effective as it was predicted to be on the modern battlefield against newer tanks?

The STAFF round was envisioned to be the Army’s first “smart” tank round. A “smart” tank round was defined as a round that could identify, acquire, maneuver to, and kill targets. These rounds differ from traditional gun launched ATGMs in that they are meant to be fired at the same velocity as standard tank rounds, making them much harder to intercept and detect. It also meant that the guidance and seeker mechanisms had to be hardened far more than those in traditional ATGMs.

The STAFF round achieved the goals of the identification and target selection via a miniaturized radar seeker in the head of the round. Maneuvering is achieved by rotating the explosively formed penetrator (EFP) warhead on the same axis of the round’s flight. Thus the STAFF doesn’t change the flight path but rather aims a secondary EFP projectile which is meant to destroy the tank.

The benefits of these rounds are numerous. The actual accuracy of the tank shot matters less, as the round itself can correct for minor errors in tank’s shot. This allows a tank to increase its accuracy in all situations: stationary, on the move, and in all weather conditions (due to the radar nature of the seeker). It also allows the tank to engage targets further out. The STAFF was estimated to have a high probability of hit out to four kilometers, allowing American tank forces to engage the enemy before the enemy had a chance to return fire accurately.

STAFF rounds could also be fired at targets discovered by UAVs or scout helicopters, even when the targets were not visible to the tank, due to the overflight path taken by the STAFF. Likewise, STAFF could even be used to engage tanks which reversed behind a berm or on a reverse slope to take cover. STAFF could even be used to conduct “recon by fire” by shooting at suspected positions where tanks may be, though this would be rather expensive.

Via the use of these advanced tactics, it was estimated that the STAFF could attain extremely high kill ratios against an enemy force of T-80s and BMP-2s. But the extreme effectiveness detailed in the report was predicated on having steady updates of enemy positions via the IVIS battlefield network to allow the STAFF shells to be accurately shot at enemy positions. Such information may not be present on an actual battlefield.

Moreover, STAFF may even have been faced tough competition from tanks under development in its era. The Object 195/T-95 super heavy tank (considered by some to be a better version of the Armata) that was under development in the 1990s also utilized radar guidance to detect and engage enemies at extreme range (four kilometers or more). The Object 195 doesn’t appear to have the advanced shoot-behind-cover capability granted by the STAFF round, but it could have proven a deadly foe in engagements in flat terrain.

However, the promise of a STAFF-like shell is not dead. One of the key features of the South Korean Black Panther is the ability to fire the Korean Smart Top-Attack Munition, a tank round similar to the STAFF that similarly uses a seeker and EFPs to defeat targets. But unlike STAFF, the KSTAM uses a parachute to slow down and is launched at relatively high angles.

Information for this article was taken from Tomorrow’s Smart Tank Munitions in Armor, March-April 1995 and The Future Combat System (FCS): Technology Evolution Review and Feasibility Assessment in Armor, September-October 1997.